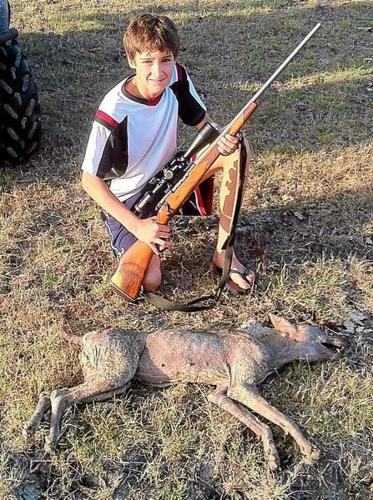 Carter Sinclair, 13, poses with the apparent chupacabra he shot on his family's land in Inez on Sunday morning. 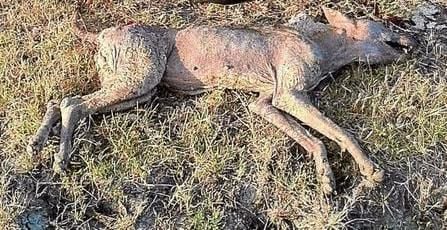 Carter Sinclair, 13, poses with the apparent chupacabra he shot on his family's land in Inez on Sunday morning.

INEZ - When 13-year-old Carter Sinclair woke up Sunday morning and peered out his second story bedroom window, the last thing he expected to see was a mangy-looking creature in the distance.

But that's exactly what he saw and shot: a chupacabra - well, at least in his eyes.

"I've seen pictures before," Carter said, an excited pitch in his voice. "This is what it looked like."

The tale of the chupacabra is one that has been told over and over.

Legend has it that the creature kills farm animals. The direct translation of the chupacabra is goat sucker.

This is not the first time a so-called chupacabra has been caught and killed in the Crossroads.

In 2007, Cuero resident Phylis Canion gained national attention for the dead animal found near her ranch.

Carter, an avid hunter, has met Canion, and never expected he too would soon witness a similar creature.

The animal went down with three shots of Carter's .257 Weatherby, Carter said.

"I was mainly shocked more than anything," Carter said.

Carter's mother, Katherine Pope and his step-father, Will Pope, have taken samples of the creature's hair and skin. They are talking with Texas Parks and Wildlife to figure out how to get the DNA tested.

"We didn't ever expect to have anything tested," his mother said.

Carter's mother has seen the photos of the supposed chupacabra and said that is exactly what the creature lying on their land looks like.

Since 2007, Canion's creature has been identified as a coyote crossed with a Mexican wolf, but Carter will forever remain excited and will undoubtedly regale the story of how he once shot and killed a chupacabra.

"I feel so lucky that I had the opportunity to see something like that," he said. "Not a lot of people see it, or shoot it."