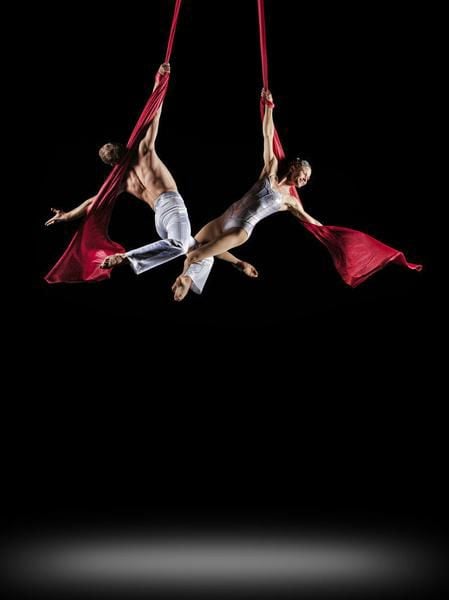 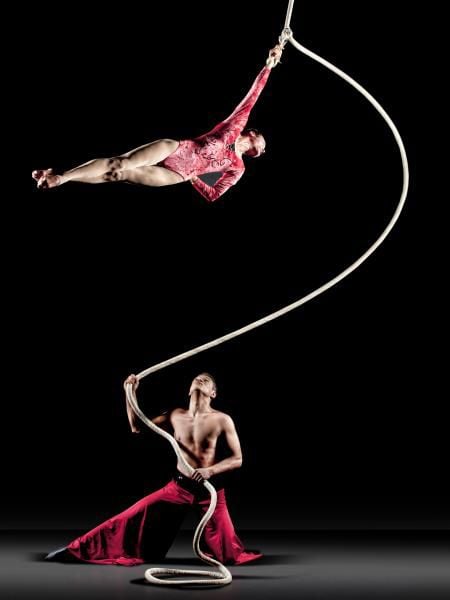 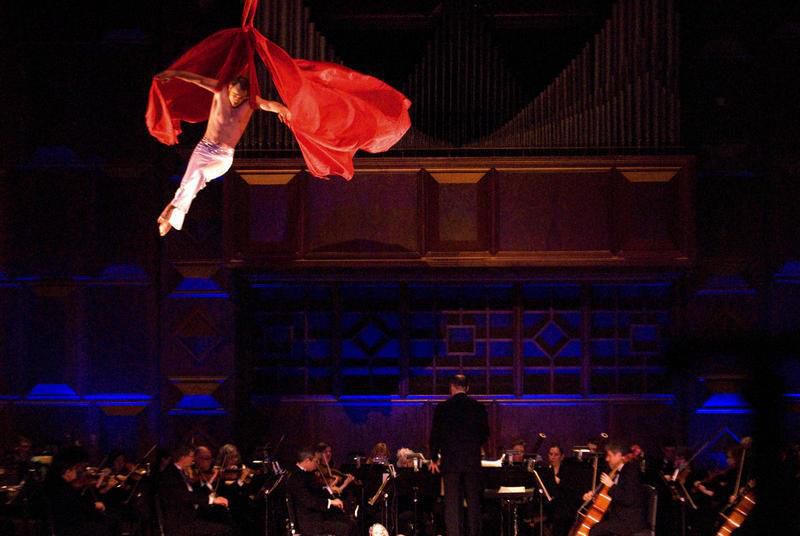 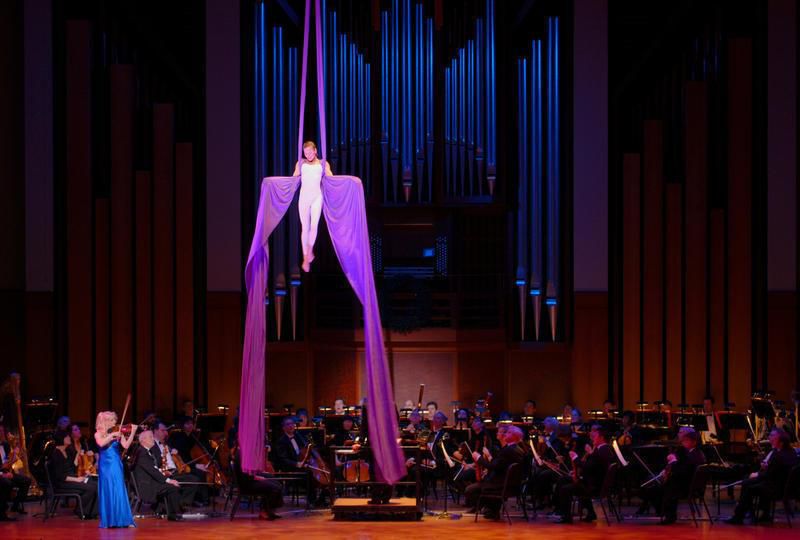 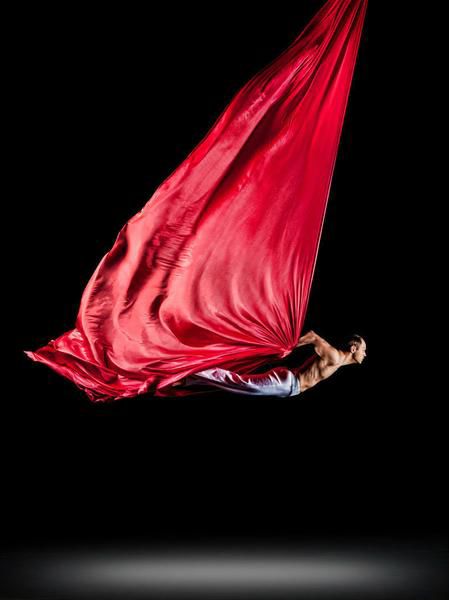 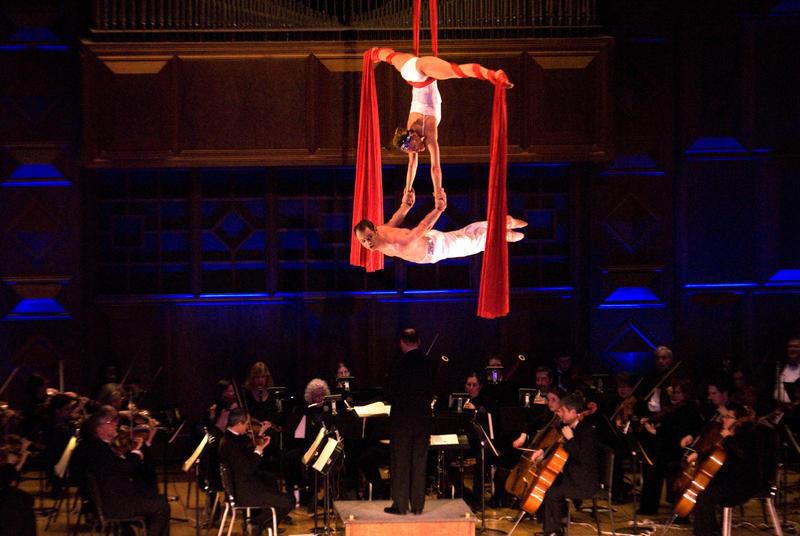 Now, imagine two beautiful women weaving their svelte figures around a cold, metal pendulum. As the circular 3-foot contraption spins and flips and the duo balances its weight perfectly, you begin to wonder, is this real?

The quickened tempo of music jumping off the string and brass instruments of the orchestra cause the room to rumble and your senses to heighten - the performance is alive.

Cirque de la Symphonie will premiere its Duo Pendulum on Saturday to the jumping rhythm of "Capriccio Espagnol" to help celebrate the 40-year anniversary of Victoria Symphony.

"You cannot only hear the music," performer Christine Van Loo said, "but you feel it coming up through you."

Loo, who's choreographed performances for the likes of Britney Spears, Ricky Martin and No Doubt, will execute the new act with her partner, Shana Lord, at the show.

Bill Allen, co-owner of the cirque, said the company has been working on the pendulum performance for about a year.

"This is going to be one of the biggest acts we'll have in our production," he said. "This will be the very first time in cirque history that it's been performed. We wanted to bring something new to Victoria."

Adapted from some of the best cirque acts performed on a stage, Cirque de la Symphonie takes the carnie underground world of aerial flyers, acrobats, contortionists and jugglers and blends their dimensional movements to the soundtrack of orchestra legends.

However, the creme de la creme of the night belongs to an aerial act performed by Loo and Broadway artist Alexander Streltsov.

The romantic, aerial ballet begins with the duo hanging by two, flowing strips of silk fabric and searching through the light textures for their partner.

"Until recently, I had been doing solo acts, and I did what I wanted," Streltsov said. "But the duo became one of my favorite acts in the show - it's like love in the air."

Aerial artist and acrobat Streltsov took a breather from practicing his high-flying act to talk to Get Out about how he got involved in performing with the Cirque de la Symphonie.

Q: What led you to become an aerial artist?

A: It was predetermined. I was born in a circus family. My father used to do a similar act to the act I am doing now, and my mom was performing as a tightrope artist. I grew up watching shows and my parents performing, and I was dreaming that I was going to be a performer myself some day.

Q: What was it like watching your parents perform?

A: It's so wonderful when you're on stage and people are clapping for you. It captivates you because you want to be that person. I was going through that every day watching my parents. I knew it from Day One that I was going to be like my mother and father.

Q: How did you train?

A: The beginning is pretty similar to everybody. My father started with me when I was 4, stretching, hanging on the rings and doing a lot of handstands. Then, when I was 6, he actually signed me up for gymnastics. I wondered why would my father sign me up for gymnastics when I wanted to be a circus performer? Later on, I realized he did it so I would develop upper body strength.

Q: And how did that lead you to creating a cirque show set to orchestra music?

A: We just wanted to introduce the cirque world to the symphony and bring it to the high arts level. Most people think the circus is all about what you might see under a tent. We wanted to show them that the circus can be at the same level of a ballet or an opera.

Q: Was it all that you imagined?

A: I loved it so much that I couldn't wait for the next show. When it happened the first time, we realized we're not only introducing a new concept, but we're also helping the symphony survive. Nowadays, the younger crowd has so many alternatives when it comes to entertainment. We realized we're doing something useful to the symphony by introducing that crowd to their world. Maybe after they see the cirque show and listen to the music, they'll want to come back to the symphony to listen to the music.