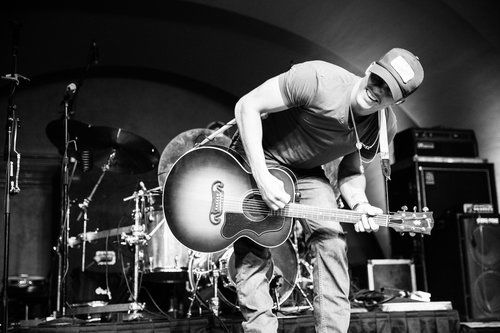 The headliner for the 6th Annual Shiner Music Festival was named one of “10 New Country Artists You Need To Know” by Rolling Stone in 2018.

The festival is 2 p.m.-midnight Saturday in Green Dickson Park in Shiner.

Parker McCollum sounds like “a no-holds-barred, confessional singer-songwriter who excels at relatable tales of twenty-something angst,” according to the quintessential music magazine. And folks should pay attention, the article continues, because his new album is honest. It was “crafted in the wake of a devastating breakup” with a “steady stream of gut-wrenching songs including ‘Hell of a Year’ and ‘I Can’t Breathe.’”

The festival will feature four other musical acts including Horseshoes and Hand Grenades, Jarrod Birmingham, Cory Morrow and American Aquarium.

General admission tickets are $30 each, and VIP tickets are $125. The VIP guests will have access to a private tent with an open bar including beer, snacks, a catered dinner and air-conditioned restrooms. The VIP tickets are limited to 250, and 200 are already sold, said Jake Jalufka, president of the Lions Club, the nonprofit festival organizer.

“(The Spoetzl Brewery) quit having Bocktoberfest, but they support us in bringing back a festival,” Jalufka said. “Our Lions Club started in 2012, and we needed a project.”

Proceeds from the event support scholarships and local nonprofits. For example, the club provides a meal for senior citizens once a month. Last year, the club gave two $500 scholarships to Shiner High School and St. Paul High School.

Festival-goers can purchase meat-laden Shiner rice, pizza and other typical festival foods. Werner’s 5 Ninety 4 Grill food truck will be on hand selling a variety of foods as well. Guests can buy 12-ounce cans of Shiner, Budweiser and Karbach beer for $4 each, in addition to soft drinks and water.

Last year, about 1,500 people attended the festival. Jalufka is expecting closer to 2,000 this year.

“We’re excited about Parker McCollum because all the kids are pretty hot on that,” Jalufka said. “I have four kids, and they are all super excited to have him there.”

More information: $30/general; $125/VIP at www.shinermusicfest.com and at gate; age 13 and under free