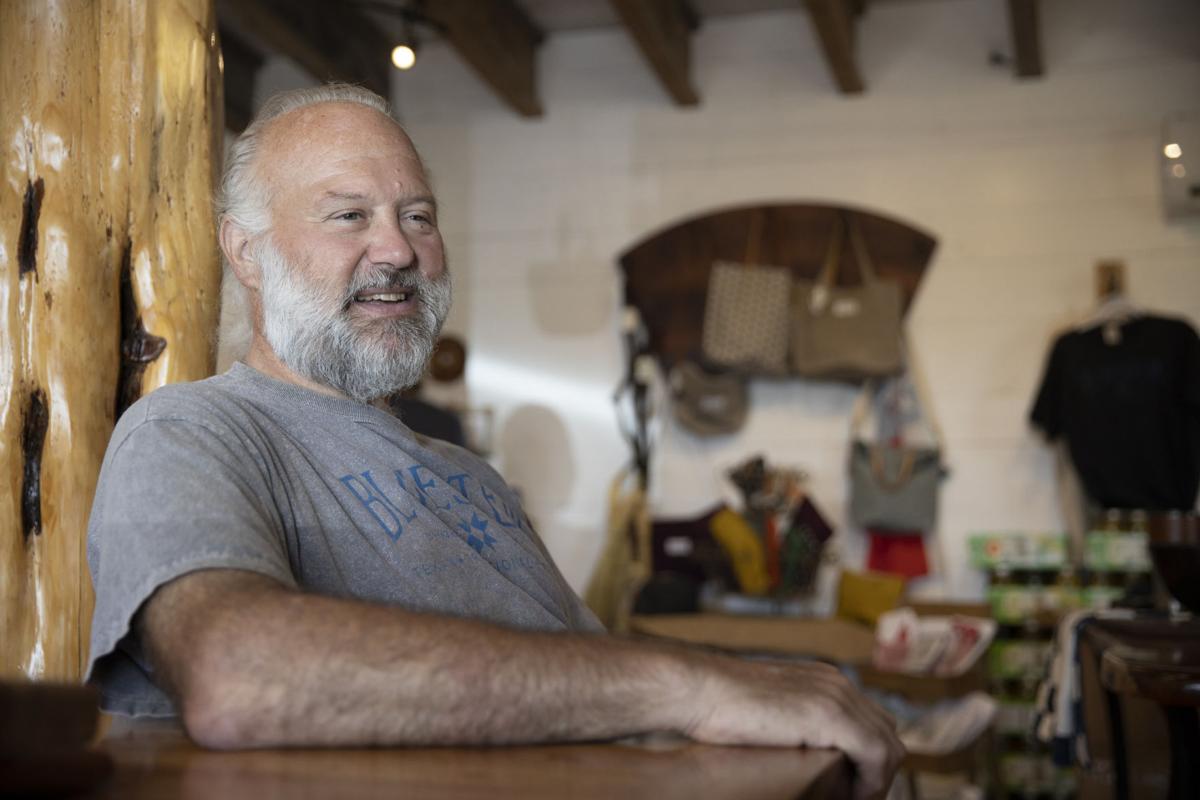 Ross Tieken, 54, co-owner of Bluestem, talks about the business he and his wife Patricia opened in 2018. The gift shop sells artisan wares and food items from across Texas. The retail store is west of Shiner on U.S. 90-A. 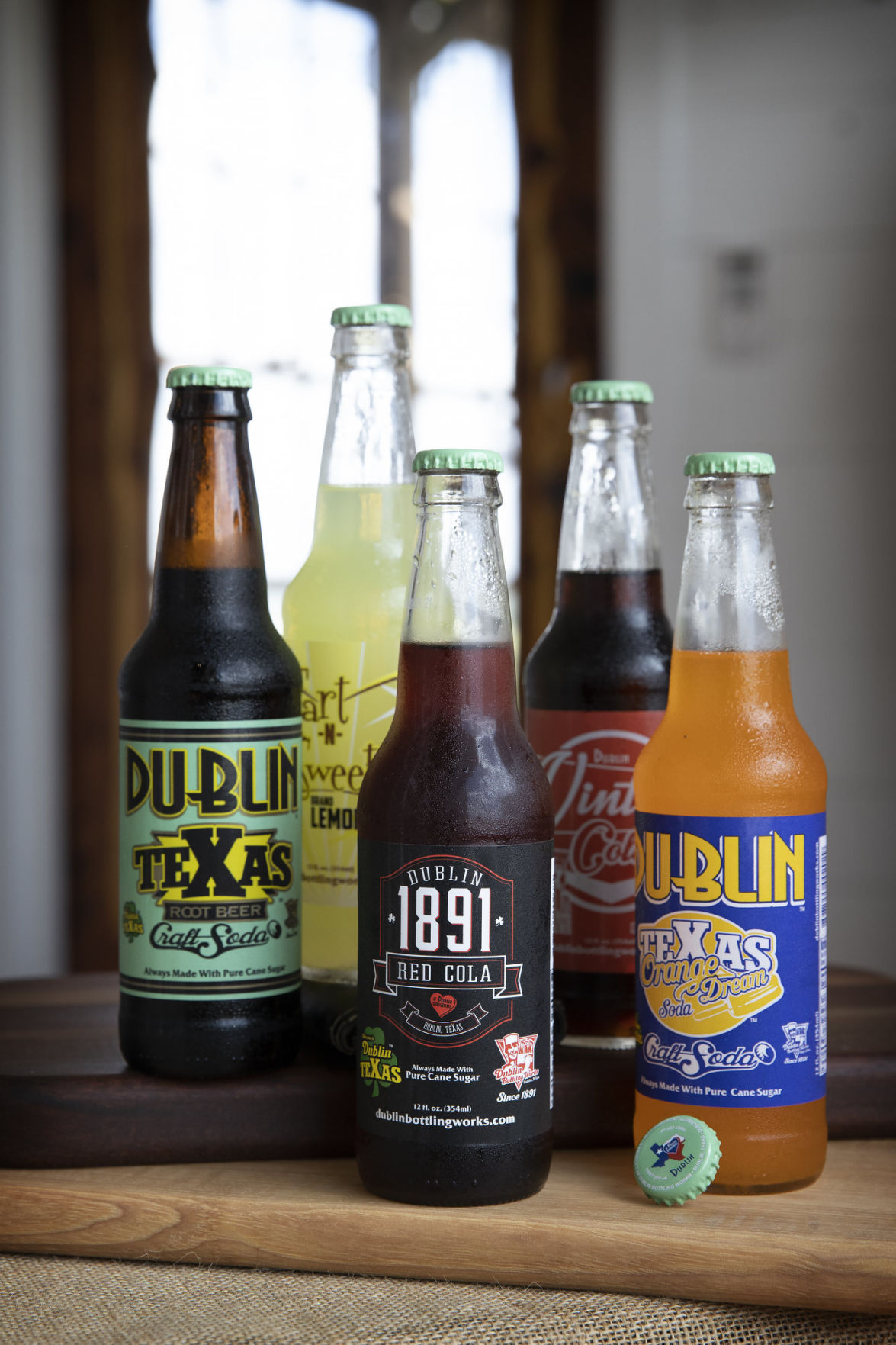 Dublin Bottling Works’ soda is only one of the Texas-made lines sold at Bluestem near Shiner. Originally the home of Dr Pepper, the Dublin-based bottler now produces craft sodas. 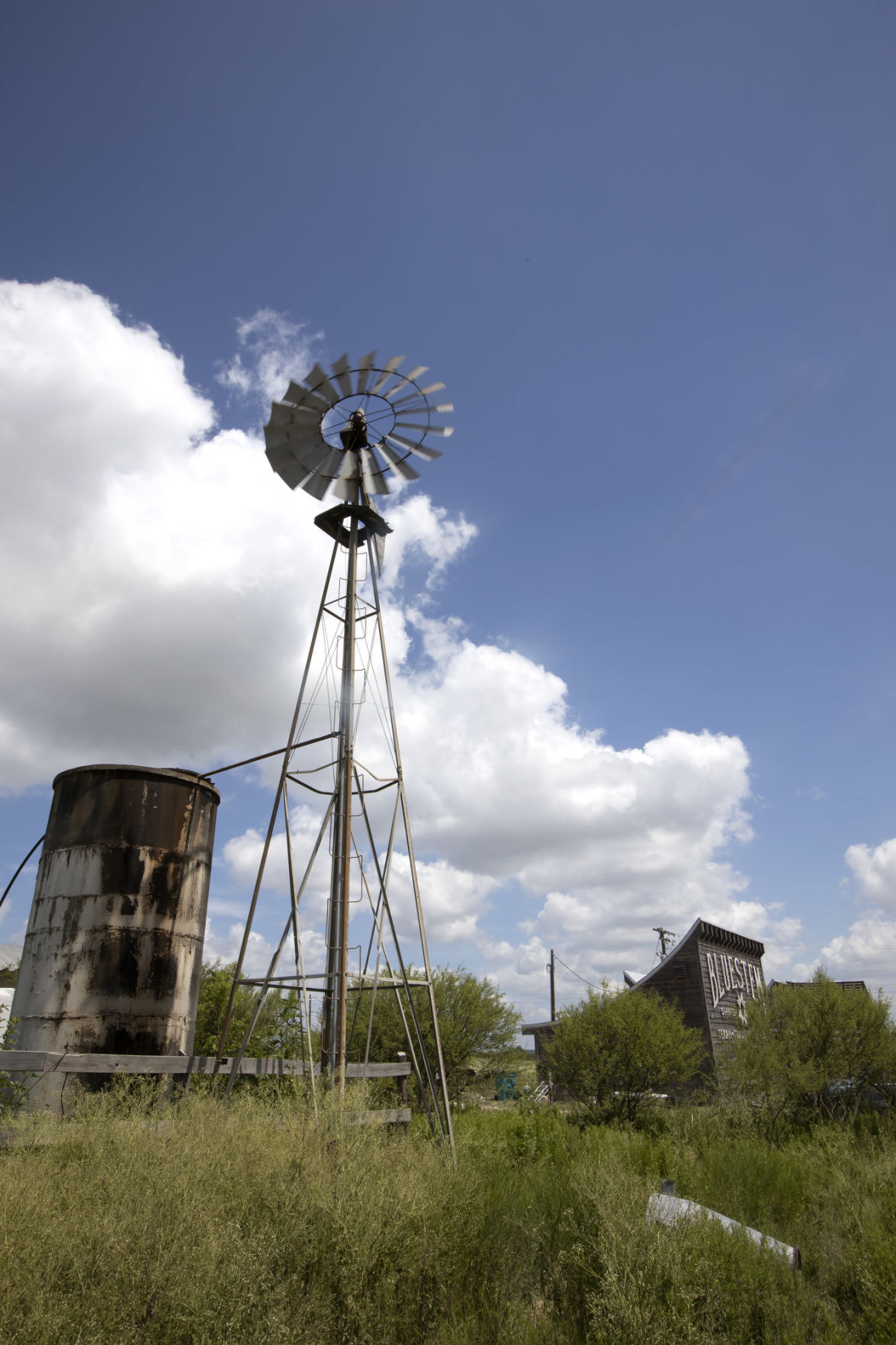 Bluestem, owned by Patricia and Ross Tieken, opened in 2018. The gift shop sells artisan wares and food items from across Texas. 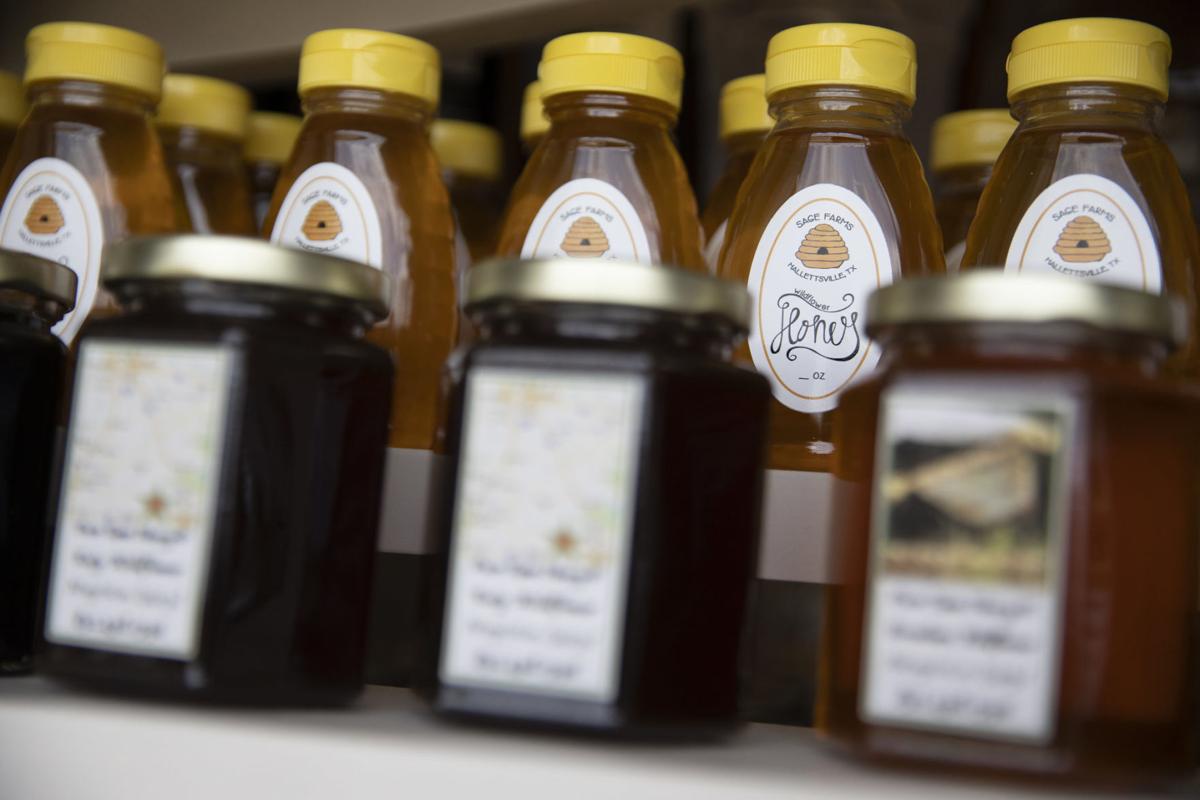 Sage Farms honey and jams are some of the many Texas-made lines sold at Bluestem near Shiner. 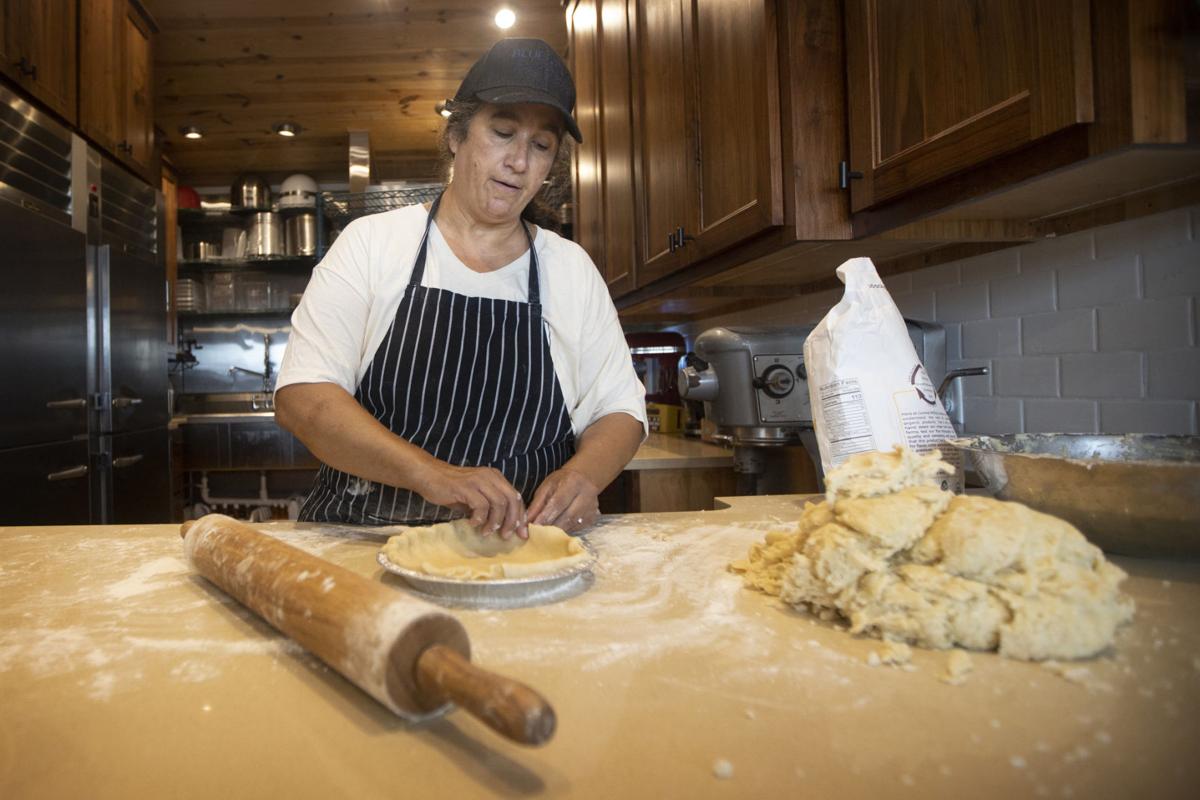 Patricia Tieken, 51, co-owner of Bluestem, rolls out pie crusts. Patricia and her husband opened the gift shop, which sells artisan wares and food items from across Texas, in 2018. The retail store is west of Shiner on U.S. 90-A.

Ross Tieken, 54, co-owner of Bluestem, talks about the business he and his wife Patricia opened in 2018. The gift shop sells artisan wares and food items from across Texas. The retail store is west of Shiner on U.S. 90-A.

Dublin Bottling Works’ soda is only one of the Texas-made lines sold at Bluestem near Shiner. Originally the home of Dr Pepper, the Dublin-based bottler now produces craft sodas.

Bluestem, owned by Patricia and Ross Tieken, opened in 2018. The gift shop sells artisan wares and food items from across Texas.

Sage Farms honey and jams are some of the many Texas-made lines sold at Bluestem near Shiner.

Patricia Tieken, 51, co-owner of Bluestem, rolls out pie crusts. Patricia and her husband opened the gift shop, which sells artisan wares and food items from across Texas, in 2018. The retail store is west of Shiner on U.S. 90-A.

SHINER – Custom-made furniture, pork and beef raised on a fifth-generation farm, savory and sweet pies and other Texas-made artisan products are available under one roof at Shiner Bluestem.

Patricia and Ross Tieken opened the business just before Christmas at the front of their almost 100-acre farm next to Shiner Prairie Woodworks, where Ross has built custom furniture and cabinetry for two decades.

“I came in the first time with a friend, and I came back for Dapper Goat cheese, and the goat milk lotion is made by a friend and former co-worker from Shiner,” said Barb Grindeland, of Hallettsville, a retired Hospice of South Texas social worker who was shopping in the store Friday. “I enjoy that they sell all Texas products, and the woodworking, it’s amazing to see the quality and craftsmanship – my husband built custom homes, and I appreciate the finished product.”

In Bluestem’s commercial kitchen, Patricia Tieken makes 9-inch sweet pies from scratch every Friday. Buttermilk, bourbon pecan and chocolate chip are among the varieties that rotate weekly. She uses buttermilk and milk from Stryk Jersey Farm in Schulenburg.

On Saturday mornings, Ross makes homemade cinnamon rolls that have become “quite famous,” fruit pies, oatmeal chocolate chip cookies and bread. The types of bread also rotate from week to week. They include homemade New York-style bagels in different flavors, English muffins, French bread, Cuban bread and Basque sheepherder bread. Customers line up outside the door during the school year.

They provide Rebecca Graber, owner of Mamaw’s Bakery and former Yoakum resident who now lives in Fort Worth, with organic flour and eggs to make homemade egg noodles they sell in the store. Graber travels to Shiner once a month, and they also sell her angel food cakes.

In May, Patricia canned 400 quarts of pickles using organic cucumbers and dill grown on their farm – half of the jars have already sold.

The Tiekens own Shiner Pork and Beef that contributes to the offerings in their store. They raise large black pigs, a heritage breed from Great Britain, that take three times as long to fatten up as modern-day pigs. A friend grows milo that they grind with an antique hammer mill and feed to their pigs.

Czech-style sausage, thin sausage links, breakfast patties, bacon, chops and roasts are among the cuts of pork sold in the store. They also sell smoked hams around certain holidays. The pork fat is buttery and tastes delicious, Ross Tieken said.

“They have micro-marbling that is redder and tastes better,” he said. “They are the Kobes of the pork world.”

The cattle they raise are crosses between Tajima and Beefmasters breeds, and they are 100% grass-fed. They sell all cuts of beef, including steaks and roasts, as well as ground beef.

Ross said customers arrive with their soft-sided ice chests and stock up on beef and pork products.

“Mix one part pork with one part beef for the best hamburger you have ever had,” he said.

In the Bluestem kitchen, Patricia uses pork and beef from their farm and as many organic ingredients as possible to make homemade savory pies from scratch every Friday. She makes pork, bacon and potato pie and beef bourguignon pie in two sizes – 6-inch that feeds two and 9-inch that easily feeds four. She also makes chicken pot pies using organic chicken from a fellow farmer and homemade lasagna.

“My favorite pie is the beef bourguignon because it has so much flavor with brandy, burgundy wine, leeks and mushrooms,” Ross said.

Every Saturday morning, Patricia drives to the Urban Harvest Farmers Market in Houston to sell their products. The pork chops and ground beef are the biggest sellers, she said.

“It’s amazing to see how many people will come to market in 100-degree weather for better quality products,” she said. “They drag bags around for 45 minutes shopping.”

Bluestem sells cheese and dairy from Four E Dairy and Lira Rossa Artisan Cheese in Moulton and goat cheese from The Dapper Goat in Waelder. Goat milk popsicles made by All We Need Farm in Needville fill a cooler at the checkout counter. The store sells honey from Sage Farms in Hallettsville, olive oil from 1836: A Texas Olive Company, and gourmet jellies and salsas from Brenham Kitchens. They are expecting raspberry chipotle made by Fischer and Wieser in Fredericksburg this month.

Texas artists showcase their paintings, photographs, glassware, pottery and leatherwork. Bluestem sells pottery made by Luling Icehouse Pottery and Angela Rogers, of Moulton, quilts also handmade in Moulton and Texas-themed T-shirts made in the USA of organic cotton. Handcrafted soaps, wind chimes, cutting boards and custom-printed dominoes, among other items, also are for sale. Their Newton Supply handbags are made in Austin by refugee women who earn a living wage in return.

Most of Ross’ custom-made furniture, ranging from tables and chairs to beds and wine cabinets, is commissioned. He builds furniture in various styles, but arts and crafts is his favorite.

“It’s very honest furniture with a special intent, and it fulfills the intent perfectly,” Ross said. “One client filled the house with the style.”

For his furniture, he selects rough wood from the mill or finds reclaimed wood such as longleaf pine from the torn-down Catholic high school band hall. A bed made from East Texas black walnut and a mesquite table supported by a handmade metal base resembling reeds are on display in the store.

Ross also has designed homes and kitchens for clients. Although custom cabinets were the bread and butter of his business for many years and helped him and his wife rear four children, Ross is trying to move away from those projects.

Ross earned an architecture degree from Texas A&M University and designed the Bluestem showroom and store and his woodworking shop. Decades apart, he spent three years building each of the structures with family and friends after work, and on holidays and weekends.

The design for the Bluestem building is based on the golden ratio, 1 to 1.618, or phi, also known as the divine proportion because of its pervasiveness in nature. The concentric circles on a snail’s shell, the seeds in the head of a sunflower and the swirl of hair on the top of a person’s head, also called “God’s thumbprint,” all demonstrate the ratio, he said. He started with his height, 6-foot 4-inches, as the dimension from which the structure developed using the ratio.

For his woodworking shop, Ross considered seven different designs before settling on the existing one. He used his grandfather’s old concrete works building as the footprint, starting with the existing base and concrete columns. Five round windows that arch across the top of one wall track the sun from east to west, and lower and upper sections of large windows that span two facing walls are horizontally graduated in proximity to each other to mimic the movement of prairie grass blowing in the wind.

“I want to build something interesting if I’m going to put my time, materials, sweat and tears into it,” Ross said of his buildings. “I want to make it as special as I can make it.”

Summer offers a steady flow of customers from Houston, Austin and San Antonio who often stop by after Shiner Brewery tours, and antique car and motorcycle groups, among other travelers from “all walks of life” often wander into Bluestem, Ross said.

“We adore our customers and are so thankful for the support they’ve given us,” Ross said. “We cherish them, it’s really fantastic.”

Andrea Cudin, owner of Lira Rossa Artisan Cheese, places fresh, homemade cheeses made from original Italian recipes in the refrigerator in a s…