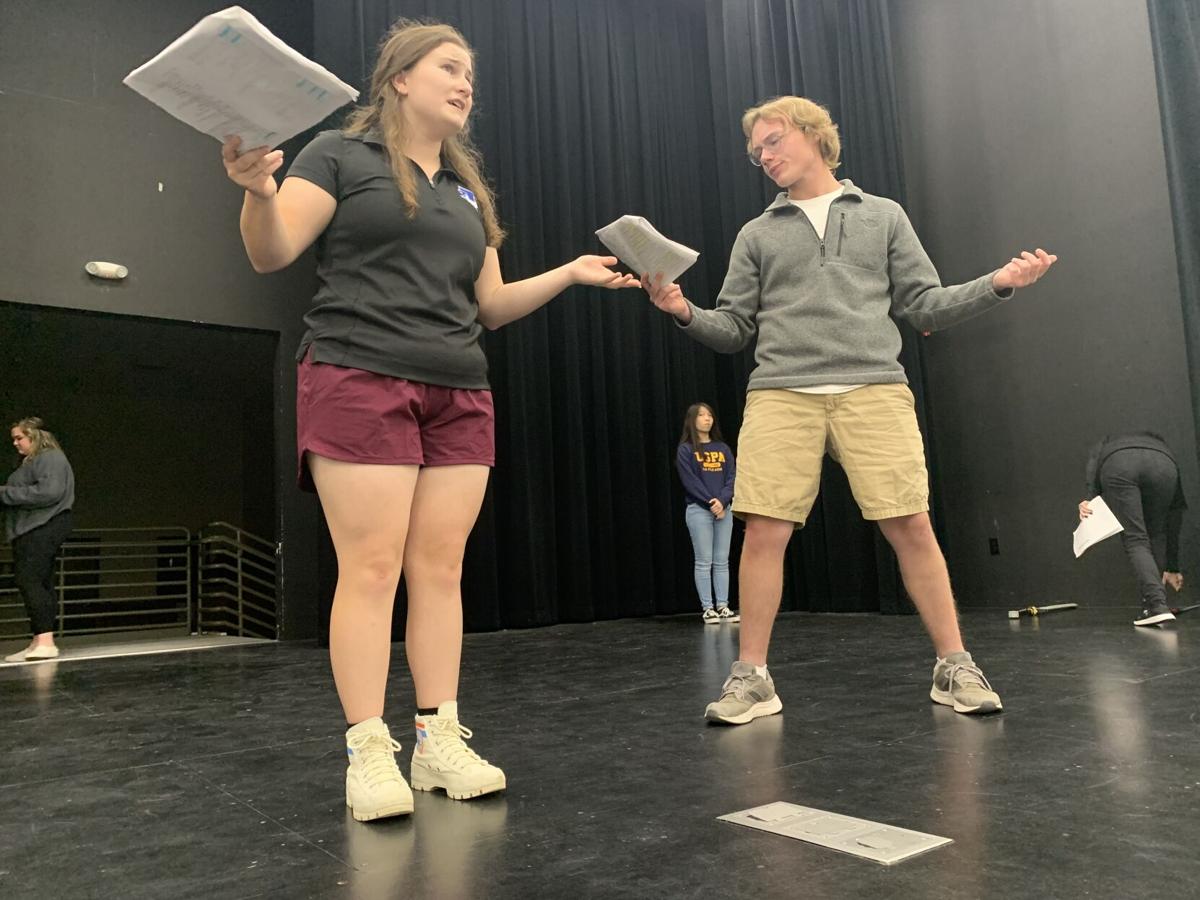 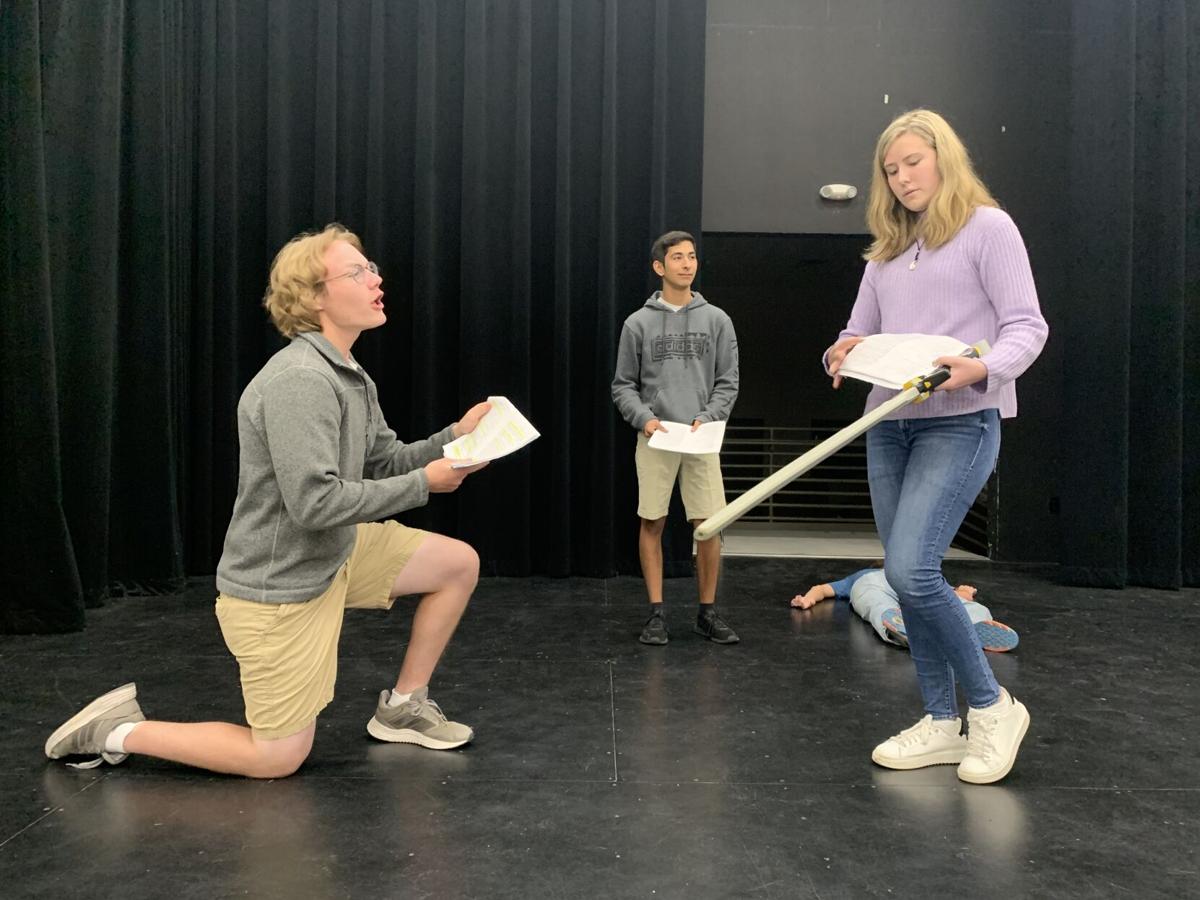 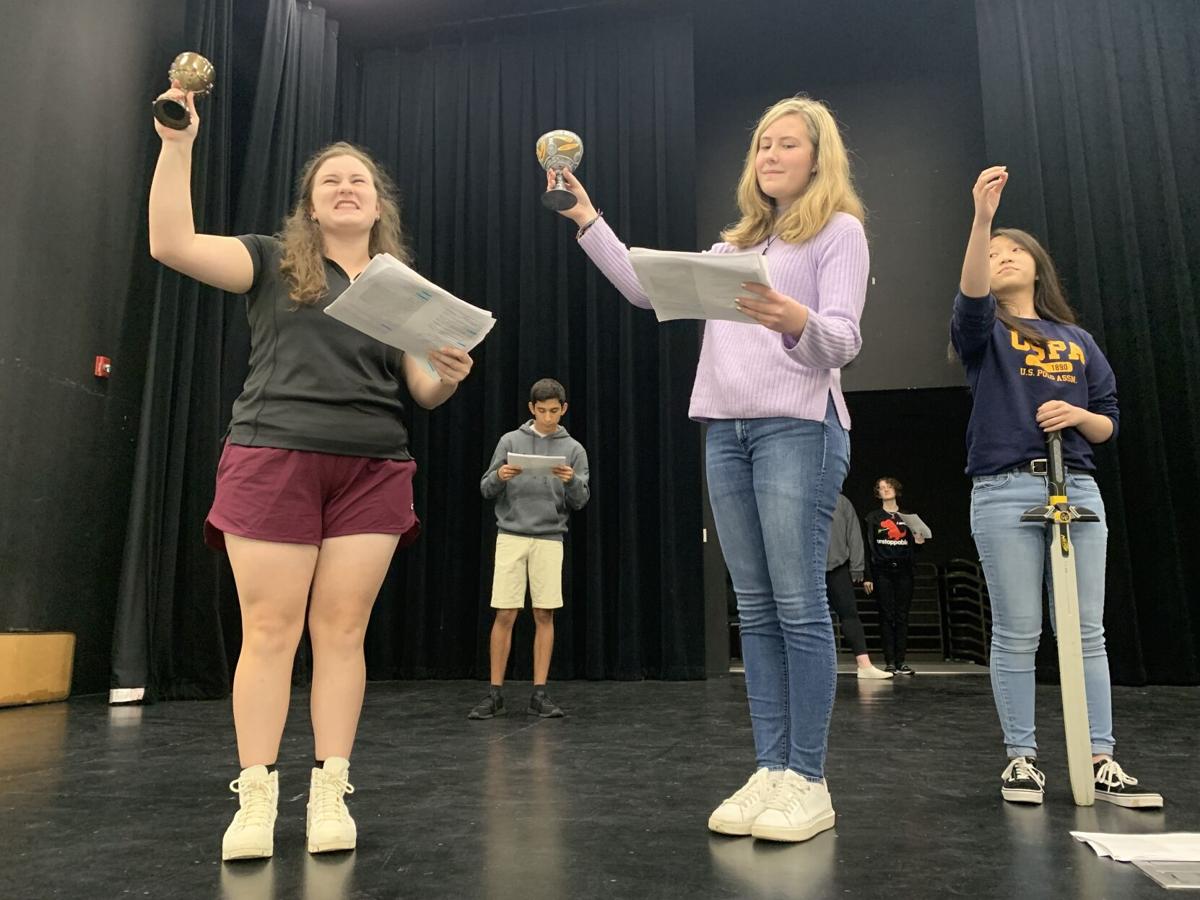 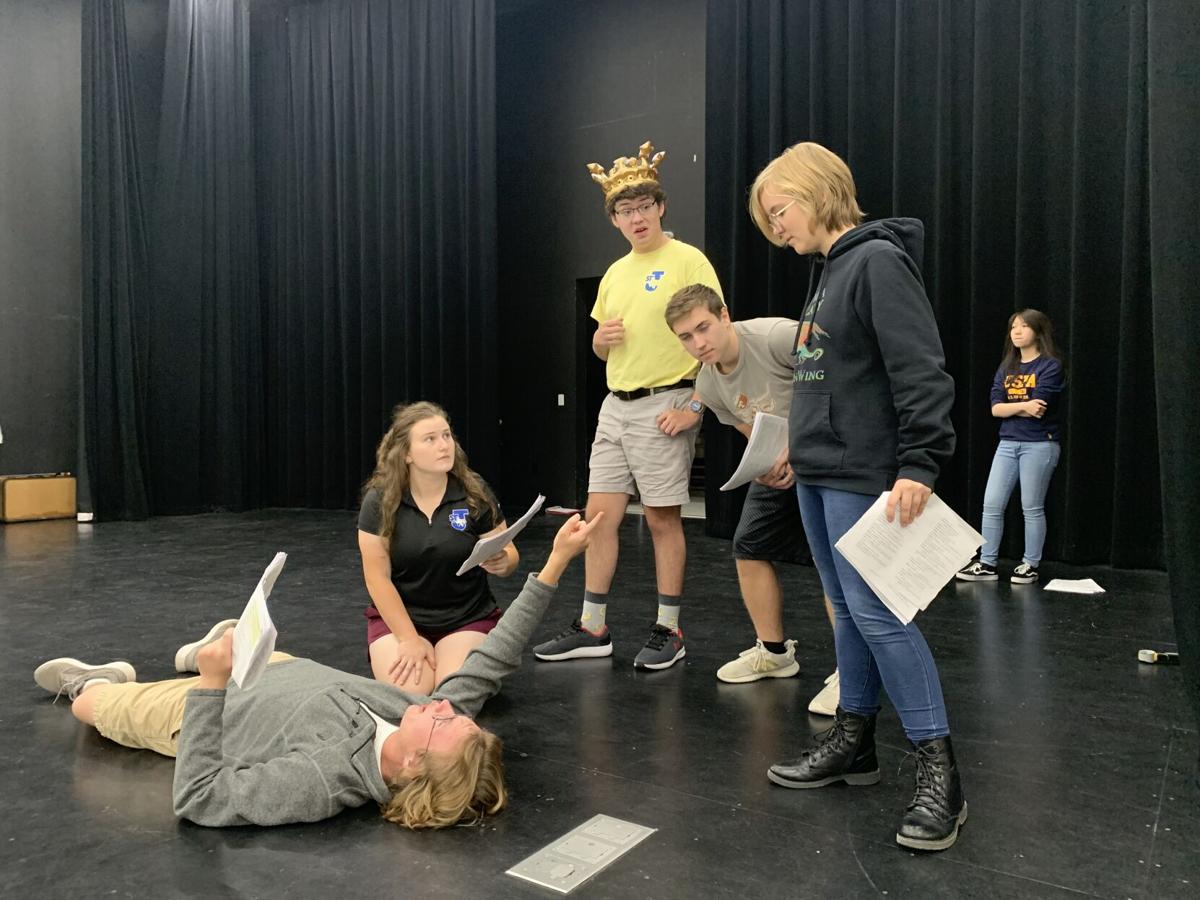 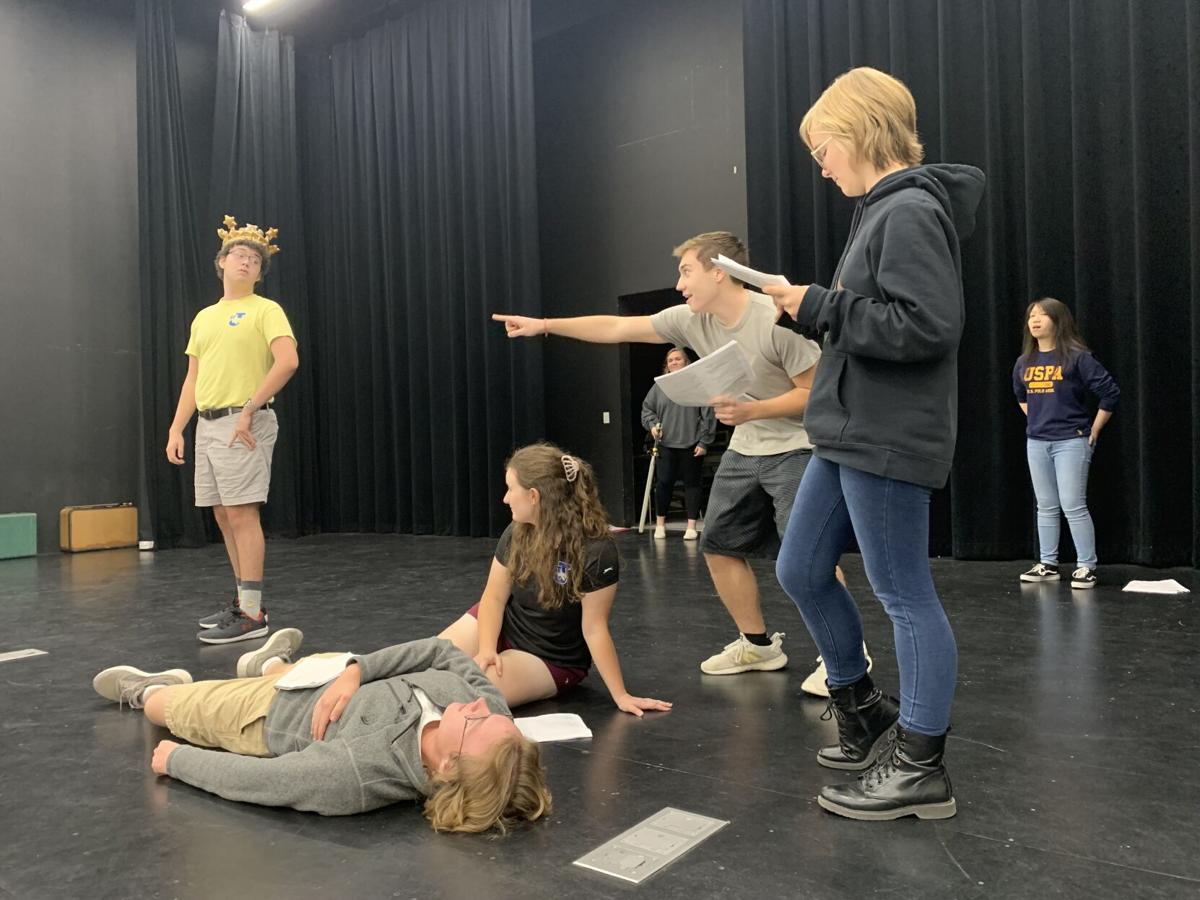 Students at St. Joseph High School are exercising their comedic chops in “Game of Tiaras,” a play where Shakespeare meets Disney and “Game of Thrones.”

The play’s author, Don Zolidis, finds hilarity in tragedy when a king decides to divide his magical kingdom among his three daughters — Cinderella, Belle and the Snow Queen.

The cast will entertain audiences with four performances at 2 p.m. and 7:30 p.m. on Nov. 19 and 20 at the David Pozzi Fine Arts Center at St. Joseph High School.

“For me, seeing each of the characters come to life through the student actors (is the best part),” said Brett Hager, an alumnus of St. Joseph High School who serves as director of the play and head of the school’s theater arts department in addition to teaching social studies and English. “The show is more character-driven than plot-driven, so the characters are the heart of the show. The student actors shape the characters and build their personalities.”

Hager described the play as having the tragedy of Shakespeare, particularly “King Lear,” the appeal of Disney princesses, and the body count and unpredictability of “Game of Thrones.”

Since Oct. 4 when the department held its first table read, about 25 students have been putting their theatrical talents to the test.

Gabriel Weaver, an 18-year-old senior, plays the part of Prince Charming, and this is not his first venture into acting. He performed in a couple of plays his freshman year and one during his sophomore year before the pandemic shut down the program.

Weaver developed his character based on a “Saturday Night Live” skit called “The Californians,” in which the comedians converse in extremely exaggerated accents.

“They sounded stupid to me, and Prince Charming in the play is a total airhead,” Weaver said. “So it kind of fit, and Mr. Hager ran with it.”

Hager commended Weaver on building the Prince Charming persona because the character does not need to save the damsel in distress like the typical Disney fairytale archetype. Rather, all of the princesses in the play are strong, independent types. So Weaver used his creativity to develop a “stupid yet strong” comedic character.

Holding the exaggerated “airhead” accent throughout the play is a challenge that Weaver has embraced while enjoying the experience of working with his friends. Weaver would like to study chemical engineering at the University of Texas at Austin or Texas A&M University, and he is not opposed to continuing his theater exploits in college if time permits.

“Mr. Hager is doing a really great job,” Weaver said. “It’s nice to be able to do this after two years of not being able to (because of the pandemic).”

Callie Nelson, 17, is a senior who portrays Cinderella in the play. She also has acting experience under her belt with roles in plays and musicals in her freshman and sophomore years, and her younger years were spent performing with Theatre Victoria’s Junior Company and T3 Summer Camps.

“We did a big table read, and I feel like you learn who your character is most when you blind read because your first inclination, how you say the line, is typically what you go with in the end,” Nelson said. “That’s not to say it’s set in stone. We get directions from the director and learn along the way.”

Nelson enjoys fleshing out the persona of the princess because the character projects sweetness and innocence while clearly having some tricks up her sleeve.

Hager complimented Nelson on her ability to transition instantly between the different emotions he throws her way. The character is dynamic, and she moves quickly and seamlessly from moments of genuine and joyful laughter to making heads roll, he said.

For Nelson, the best part of performing in plays is creating a little family within the larger STJ family. Underclassmen get to know upperclassmen, and vice versa, so they become friends even though they do not share the same classes or run in the same circles, she said.

“It’s quite special,” she said. “The people you meet and the connections you make are the best part.”

Letting go of insecurities and accepting embarrassment for the sake of humor onstage are challenges Nelson has met head-on.

“Honestly, you have to embarrass yourself the entire time onstage,” she said. “You learn to love it. You learn it’s the most wonderful thing, and the result is not only applause but a good show.”

Nelson intends to study engineering as an undergraduate and enroll later in a physician assistant graduate program. She has received a scholarship to McDaniel College in Maryland, and she is in the process of exploring her academic options.

Weaver and Nelson agree that performing onstage helps build public speaking skills, which can be carried through life. Nelson added that the practice of acting has helped her develop abilities to empathize and sympathize.

“You have to empathize with your characters to portray their emotions, and it’s good training for any field. It’s a practical skill that happens when you don’t even realize it’s happening,” Nelson said. “It’s just recognizing there are two sides to every coin.”

Hager built upon the benefits of theater identified by his students. He said the “wacky, fun, messy and zany” creative outlet brings out sides in them that they do not know they possess. They are allowed to unleash their creative, chaotic energy, which often gets bottled up, he said.

“It challenges them to be someone they have not thought of being before, and you won’t find that in any other creative media,” Hager said. “Ultimately, it helps them explore further who they are.”

What: "Game of Tiaras," a play by students at St. Joseph High School

More information: Tickets are $12 each at www.stjvictoria.com/athletics/tickets.cfm. Scroll down to the Theatre Arts section at the end.