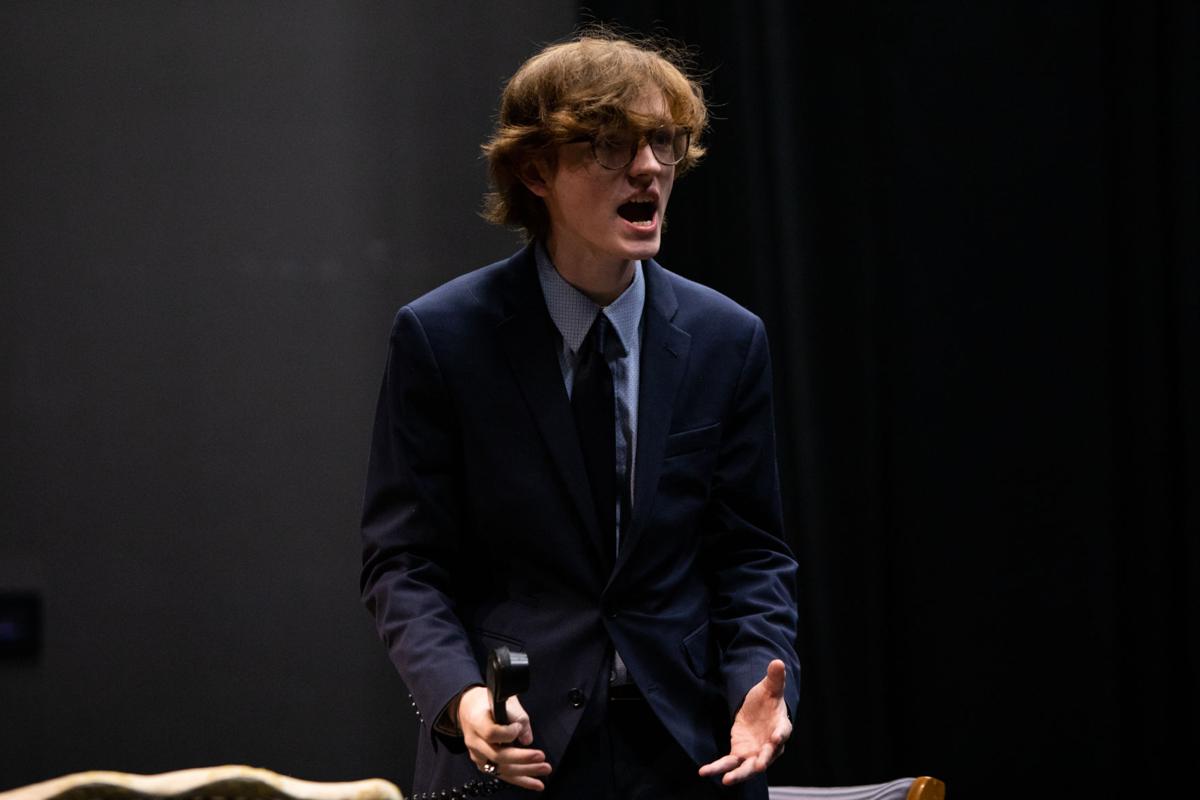 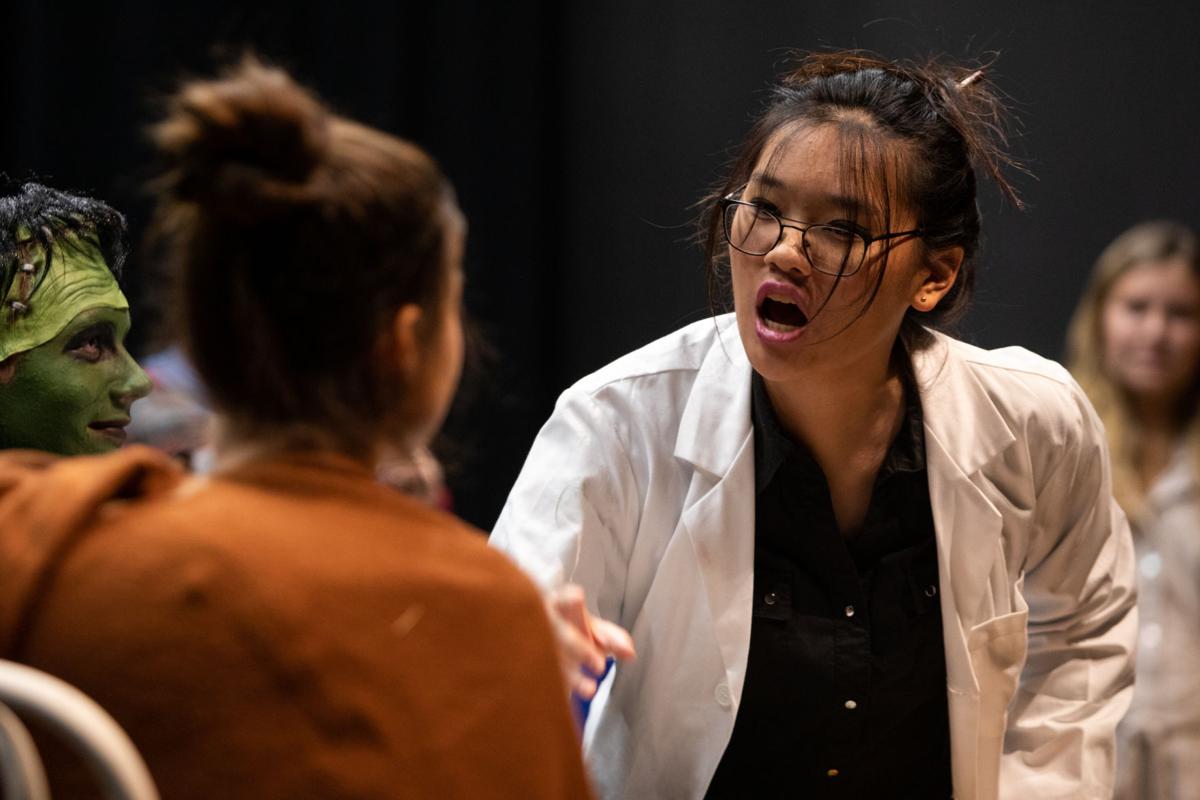 Elaina Lee as Dr. Frankenstein performs a scene during the dress rehearsal of “Unwrapped” at the David Pozzi Fine Arts Center at St. Joseph High School. 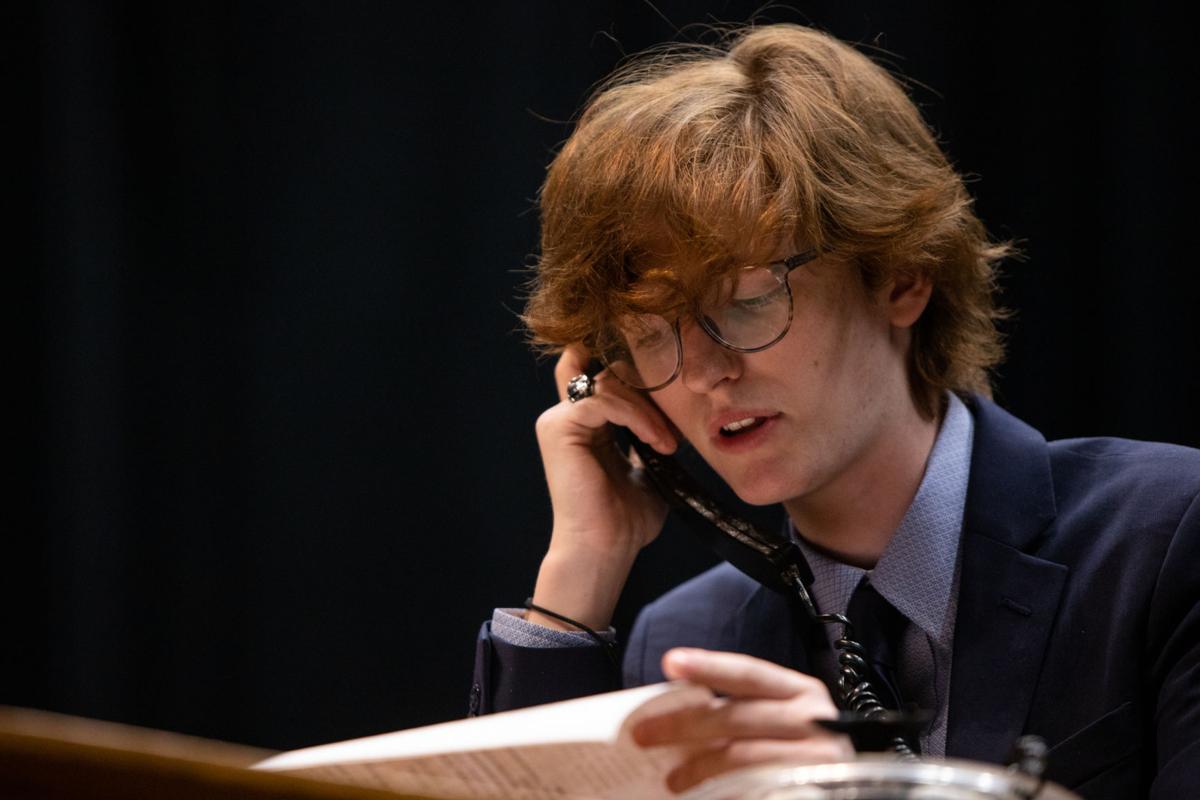 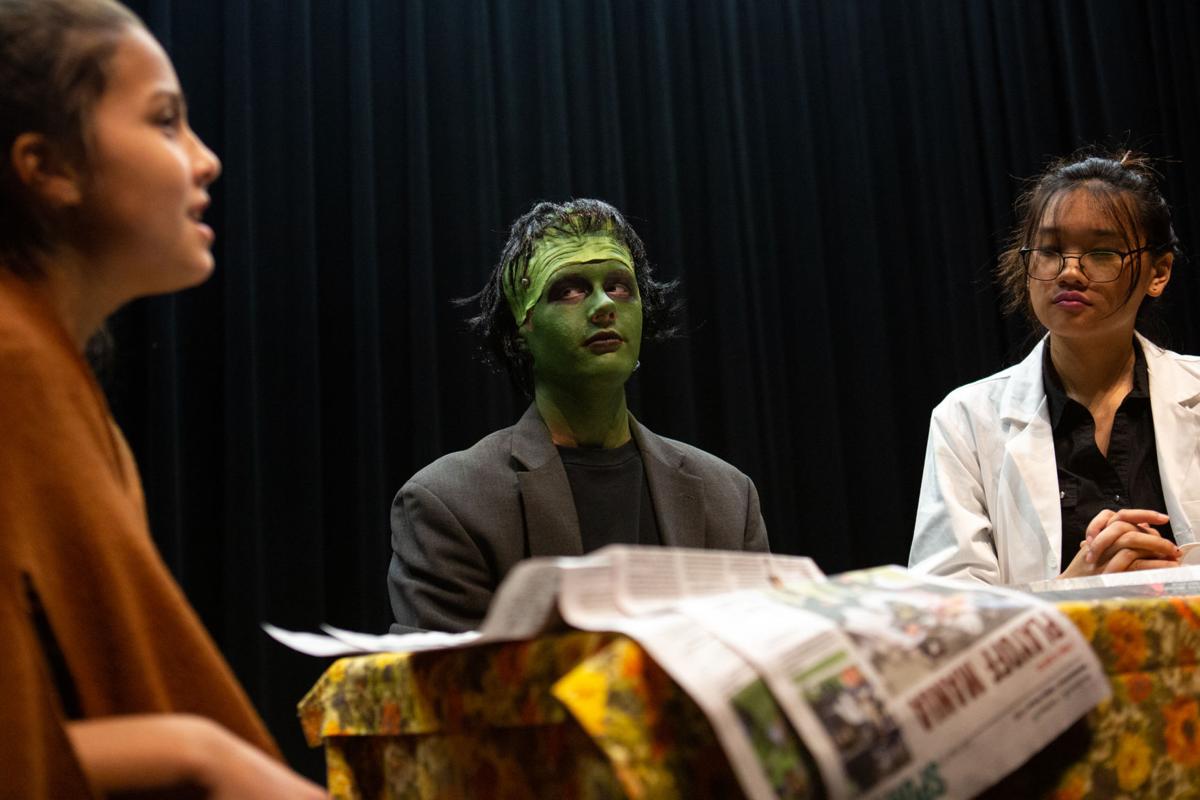 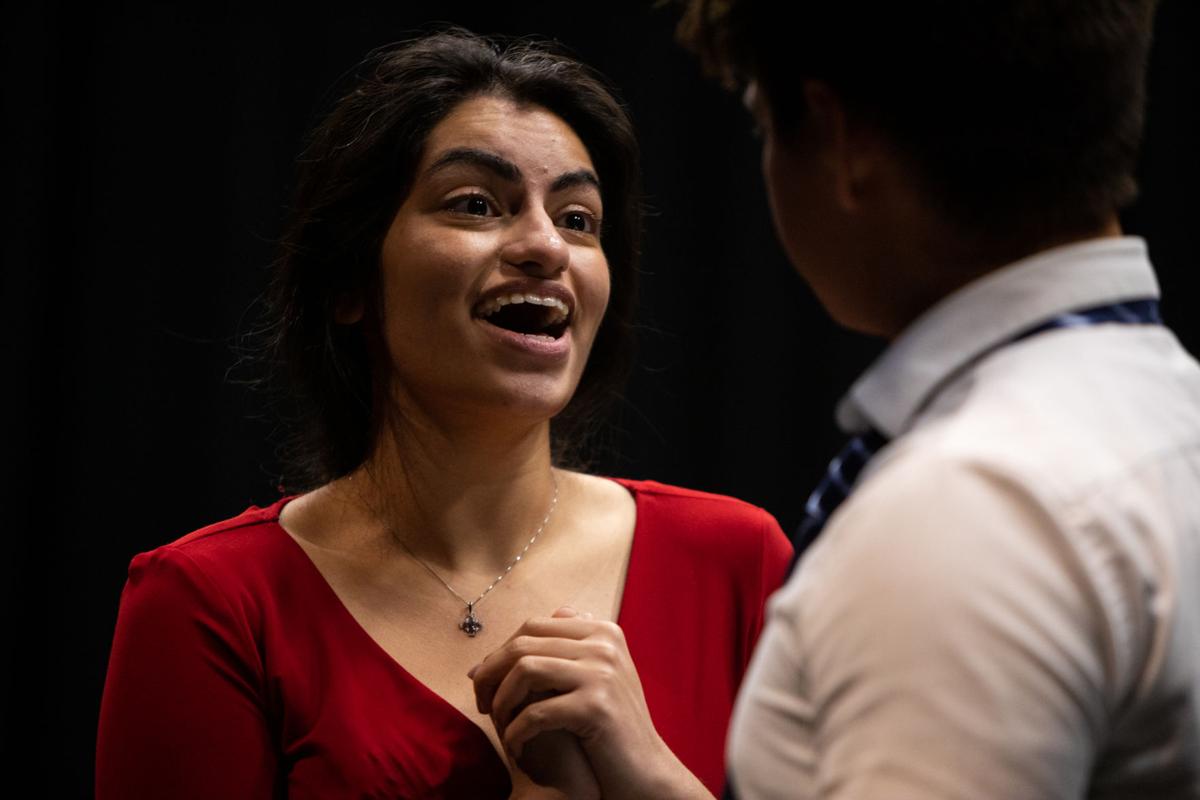 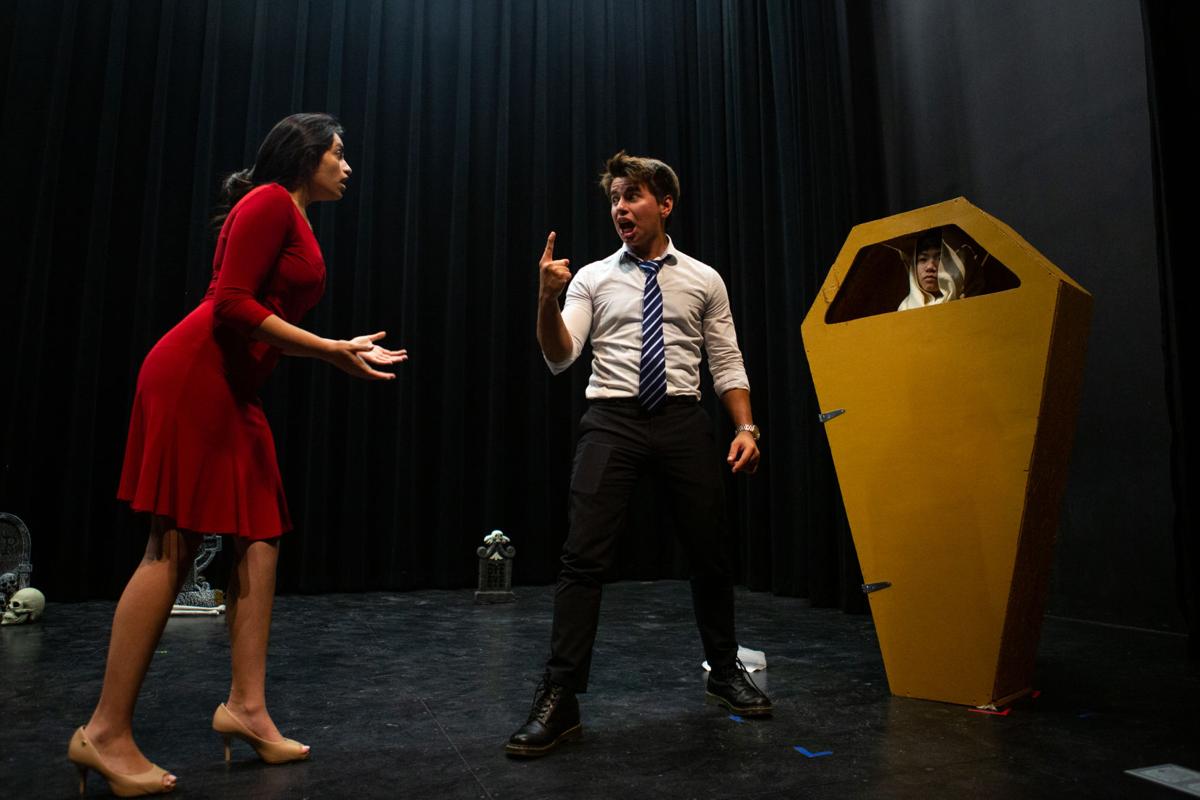 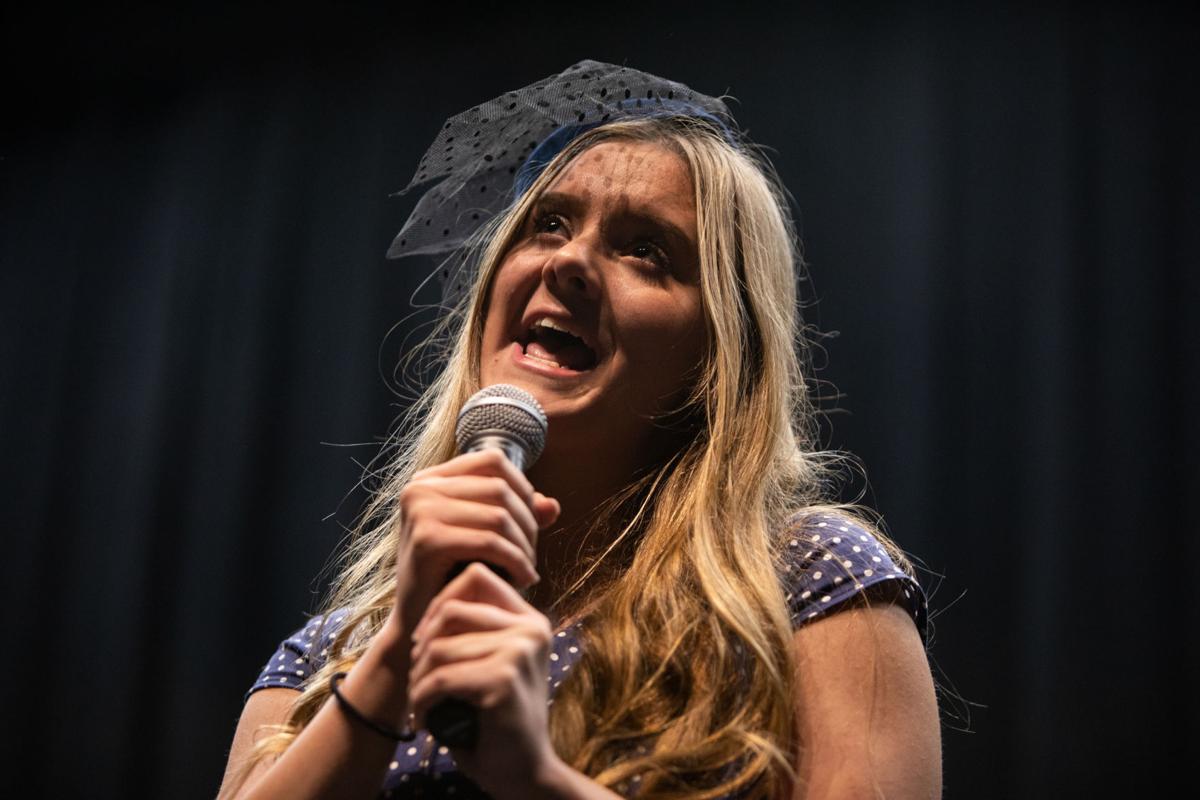 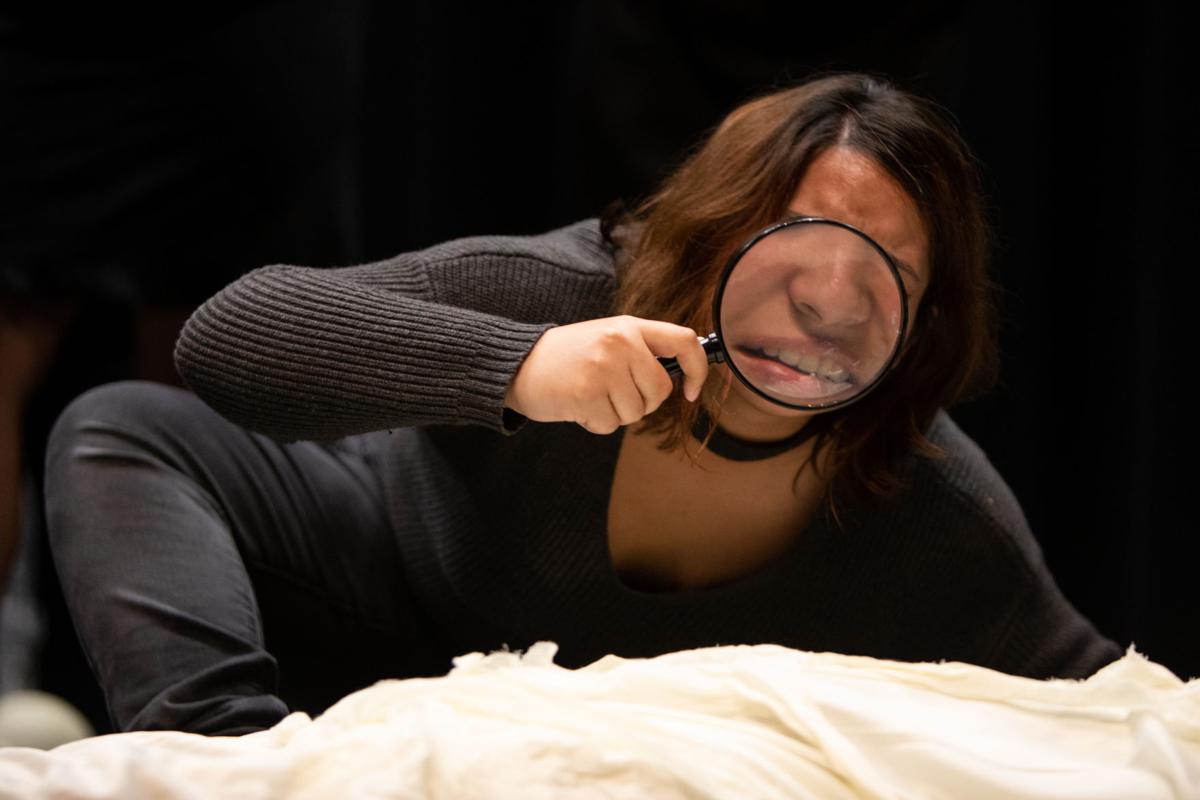 Mariana Valdivia as Inspector Idiot investigates a dead body during a scene on stage during the dress rehearsal of Unwrapped at the David Pozzi Fine Arts Center at St. Joseph High School. 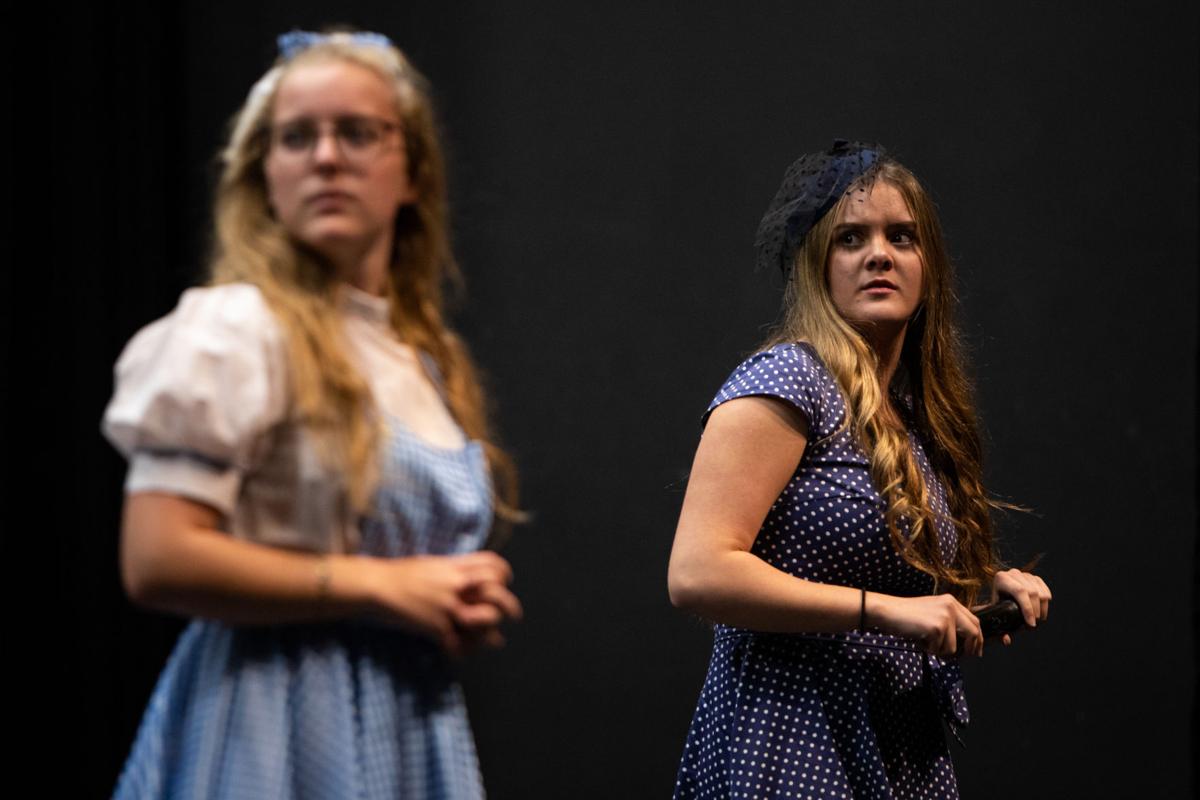 Anna Southern reacts to a cast mate while acting out a scene on stage during the dress rehearsal of Unwrapped at the David Pozzi Fine Arts Center at St. Joseph High School. 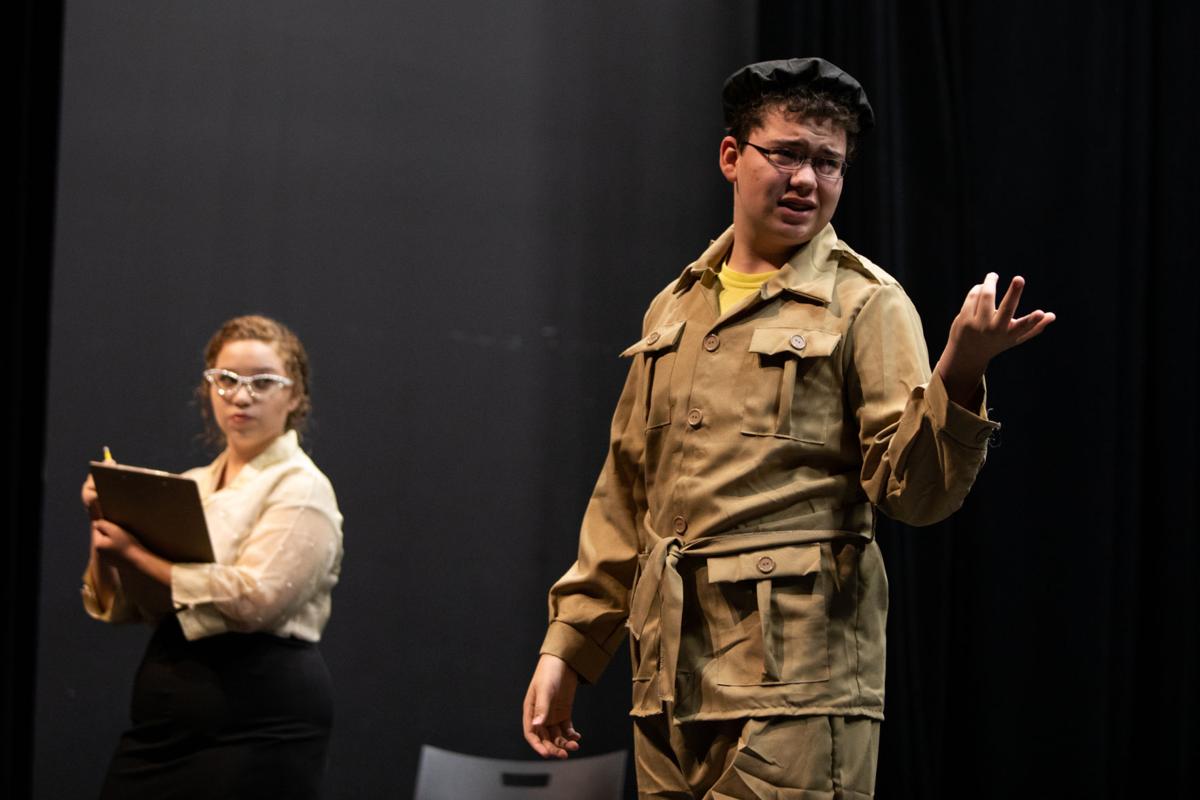 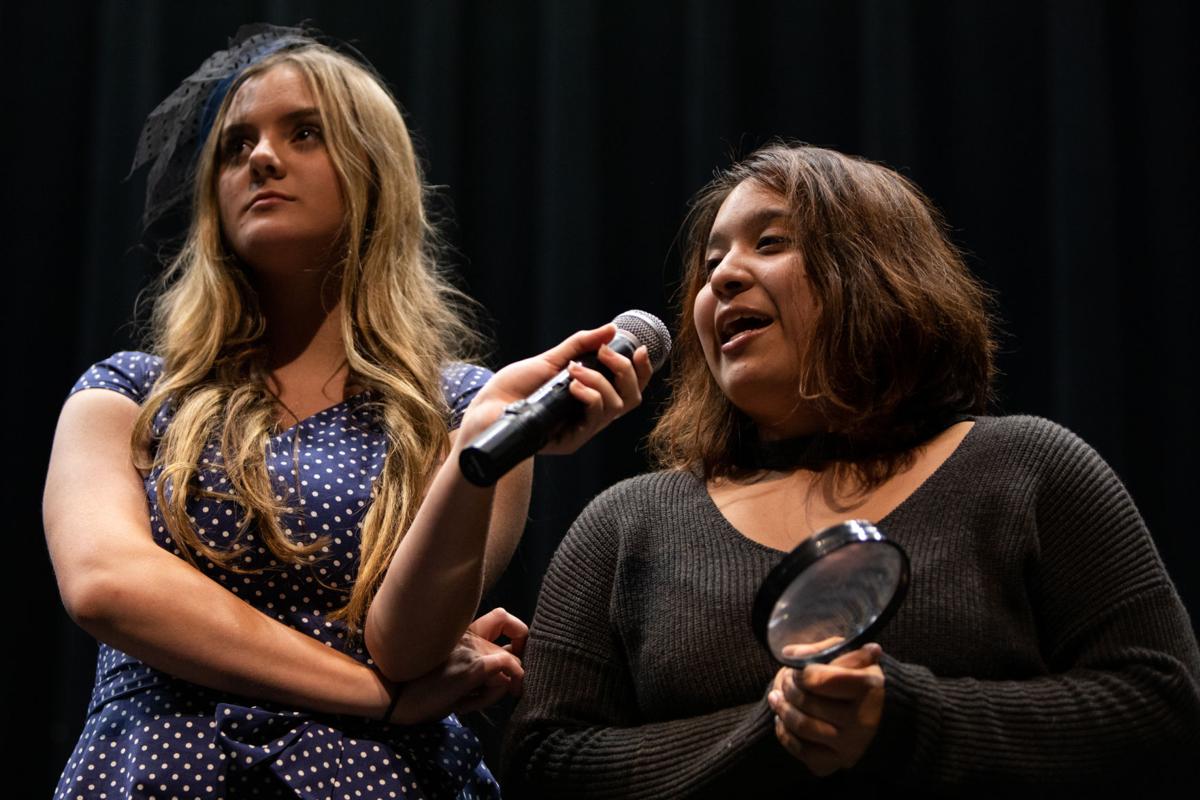 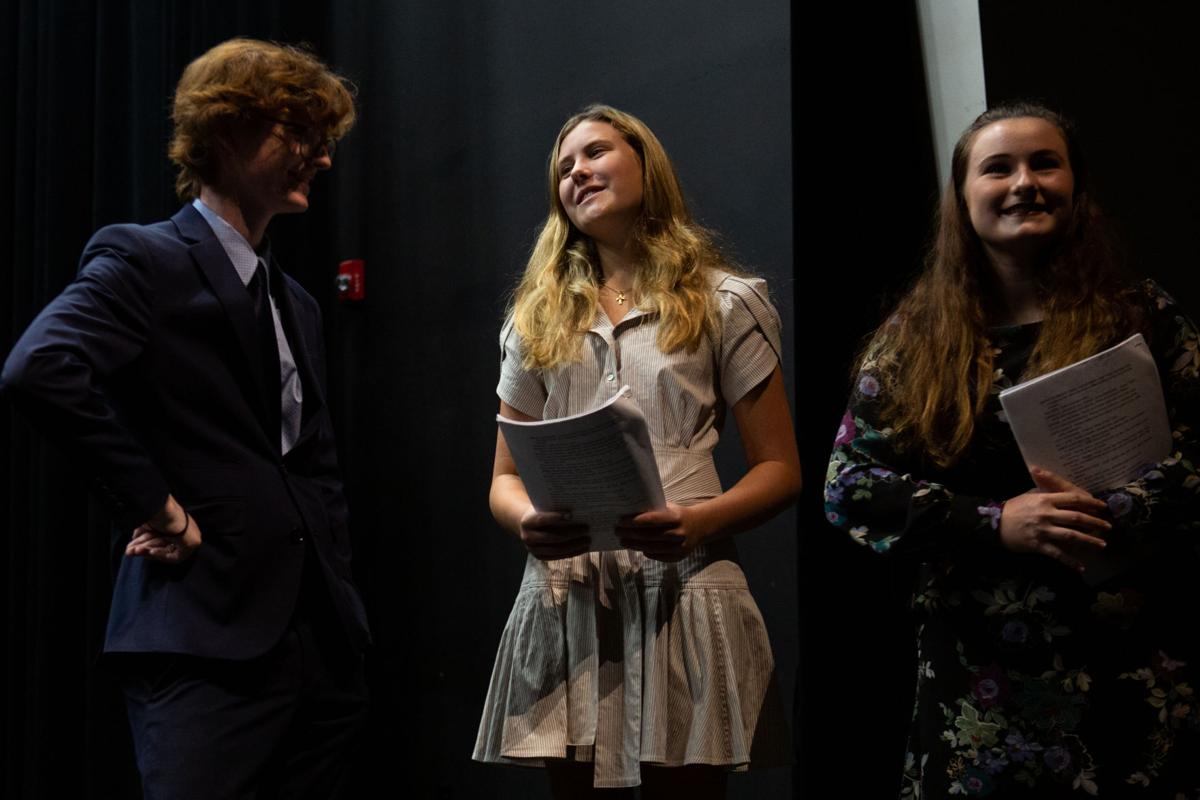 Elaina Lee as Dr. Frankenstein performs a scene during the dress rehearsal of “Unwrapped” at the David Pozzi Fine Arts Center at St. Joseph High School.

Mariana Valdivia as Inspector Idiot investigates a dead body during a scene on stage during the dress rehearsal of Unwrapped at the David Pozzi Fine Arts Center at St. Joseph High School.

Anna Southern reacts to a cast mate while acting out a scene on stage during the dress rehearsal of Unwrapped at the David Pozzi Fine Arts Center at St. Joseph High School.

Who can resist a comedy-murder mystery with a cast of characters whose names include David O. Dimwit, Hedda Gobbler, Otto Von Strongman and Inspector Idiot?

Students at St. Joseph High School are morphing into these and other over-the-top personas for the play “Unwrapped” on Nov. 15 and 16 in the David Pozzi Fine Arts Center.

“I really liked the premise of this down-and-out producer who is trying to get back on his feet after producing flop after flop after flop,” said Brett Hager, the director. “So he’s trying to put all his eggs in one basket for one final film, and there’s a little bit of mystery behind it, too, because the actors start dying while they are filming.”

Hager selected the play from numerous others available through Pioneer Drama Service, a theater service for middle and high school drama programs. In addition to entertainment value, the production appealed to him because the actors “break the fourth wall,” acknowledging and addressing the audience during the performance.

“We think of the stage as having two walls, left and right, and a back wall,” Hager said. “There is an imaginary fourth wall at the front of the stage, so breaking the fourth wall is a wink to the audience.”

The production also is especially effective at showcasing the students’ talents in character development, he said.

“This is very much a character-driven show to where all the characters have some little quirk behind them that makes them funny or makes them weird in some sense,” Hager said. “The characters really drive the show forward, rather than the events that happen.”

In the opening scene of the play written by Charlie Lovett, junior Anna Southern, 16, will play nosy, coffee-obsessed Hedda Gobbler. As a gossip columnist, she will ham it up as she talks turkey on the latest thriller, creatively titled “Thriller,” produced by David O. Dimwit, the lamest movie producer in 1930s Hollywood. Senior Aidan Holford, 17, will transform into manipulative, self-centered Dimwit.

“Theater is my time to calm down – I’m a cheerleader and a swimmer, too. So this is the least active thing I do, but at the same time, it’s emotional,” Anna said. “I’m able to get my anger out on stage, and when I’m supposed to be sad, I get that out, too. It’s a way to calm down from the craziness of life.”

Anna watched old films and other recordings starring Hedda Hopper, the actress and gossip columnist on which her character is based, to prepare for her role. She mimics Hopper’s quick motions and steady gaze into the camera, she said. She also studied soap opera characters “with an angry side to them” for inspiration.

Anna’s performance in “Unwrapped” is her fifth, including Theatre Victoria T-3 camp and other St. Joseph High School productions. She is interested in pursuing theater in college and is eyeing programs at Texas A&M-Corpus Christi and the University of Texas at Austin. The prospect of eventually earning a living in acting also appeals to her.

To develop his character, Aidan watched documentaries of producers talking about making movies. He wanted to understand their roles and responsibilities during productions.

In the play, his character, Dimwit, sees the production as his last chance to get it right and is exasperated as everything goes wrong the entire time, Aidan said.

“I get it a little – the whole exasperation thing,” Aidan said. “I understand being tired with schoolwork and work I do outside of school, and I get that out through the character. I get the whole idea that something has to be right – that he’s got to get it right.”

Aidan fell into acting by accident when he was taking someone home and ended up in auditions. He discovered a passion for acting, and the rehearsals became the stress-free period of his day, he said. He performed in a St. Joseph High School musical last year, but this is his first play.

Aidan might pursue the craft in college for enjoyment but aspires to a career in teaching. Originally, teaching history at the college level was his goal, but his time in Hager’s government class also has opened his eyes to the possibility of teaching government to high school students.

“This could be really enjoyable – seeing students learn the fundamentals and basics of government,” Aidan said of his experience in Hager’s class. “I could really enjoy doing that.”

The performance includes about 40 students who represent all grade levels. About half of them act and half help with the production. They began rehearsing the beginning of October, and they have practiced two hours per day, four days per week for the past five weeks. During the week leading up to the performance, they have practiced three hours per day.

Tickets are $10 online and a few are available for cash purchase in the school office.

“I’m proud of the kids,” Hager said. “They have put their hearts and souls into it.”

MORE INFO: Tickets $10/each at stjvictoria.com; pick them up at will-call before performance; limited tickets available for cash purchase in school office.