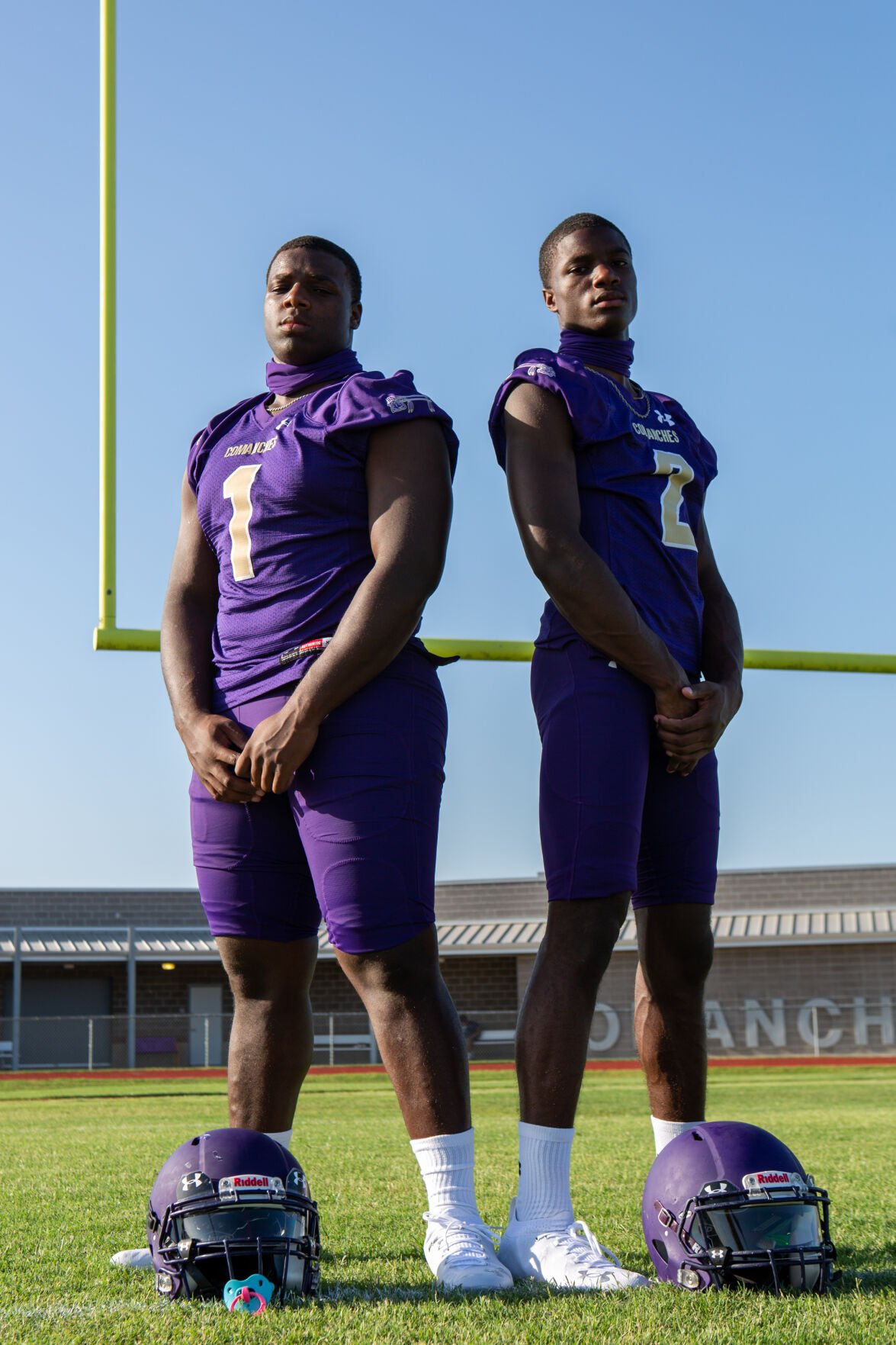 Brothers, Doug, left, and Dalton Brooks return for No. 1 Shiner. 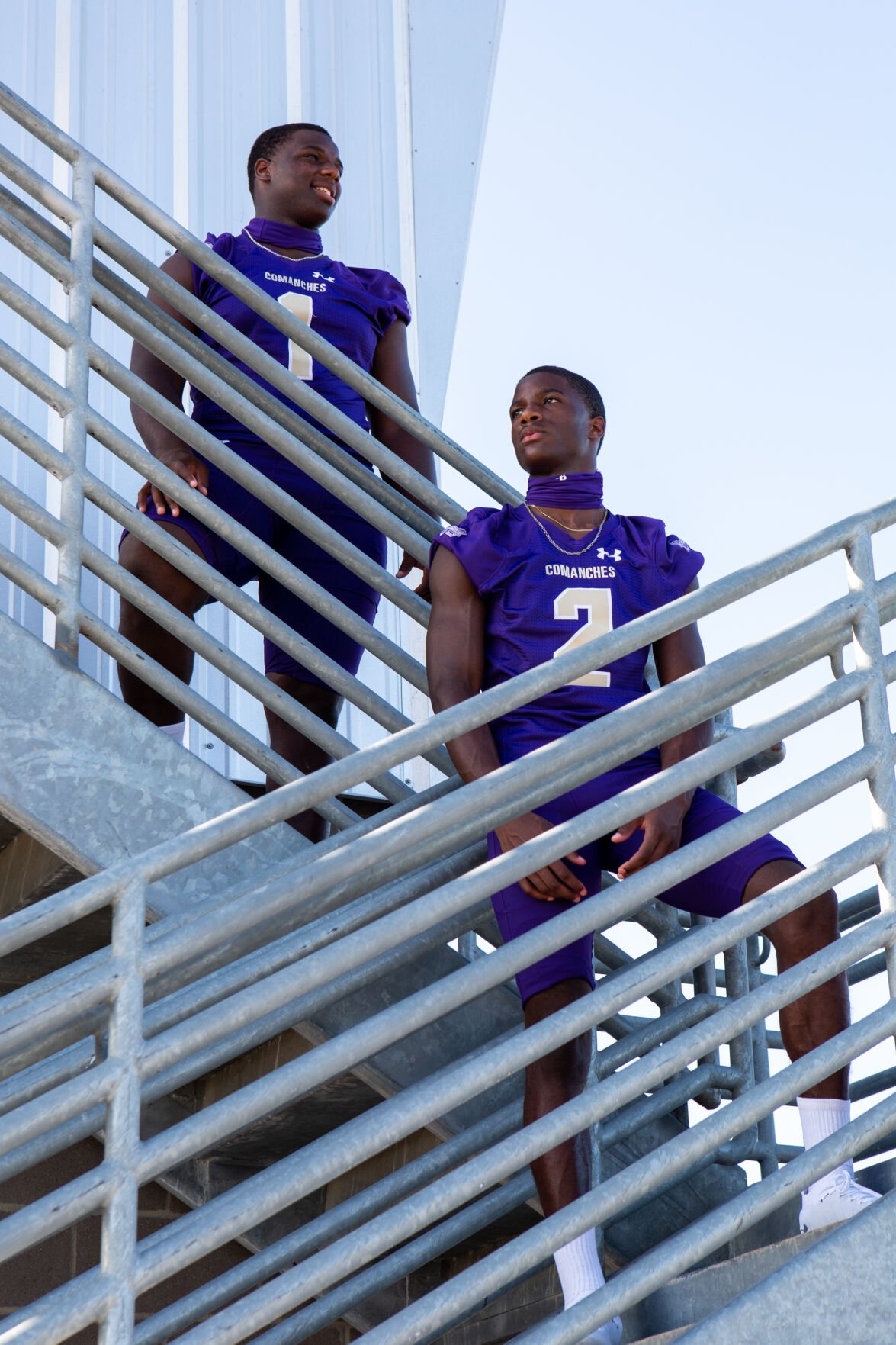 Shiner’s Doug and Dalton Brooks are the Victoria Advocate’s Class 2A coverboys for 2020.

Brothers, Doug, left, and Dalton Brooks return for No. 1 Shiner.

Shiner’s Doug and Dalton Brooks are the Victoria Advocate’s Class 2A coverboys for 2020.

SHINER – The brotherly bond between Doug and Dalton Brooks is unmistakable.

But the physical differences between Douglas Brooks’ and Lashaun Barnett’s sons are impossible not to notice.

Doug, a 6-foot, 275-pound junior, started for Shiner as a freshman and plays fullback and on the defensive line.

Dalton, a 6-2, 175-pound sophomore, started as a freshman and will split time at running back and receiver while also playing safety.

“My dad said growing up, I always got two bottles and he got one,” Doug opined. “That’s what they said.”

“It’s the two bottles,” Dalton agreed. “I think that’s why.”

Their size difference aside, the Brooks brothers are one of the reasons why the Comanches enter the season ranked No. 1 in the Class 2A, Division I state poll and are expected to make a run at a third state championship.

The brothers have played football together since a young age, and both had the drive to excel in the sport.

Doug’s experience has allowed him to step into a leadership role on a senior-laden team.

“As I get older, the game grows,” he said. “It starts to change and the more I go everything gets faster. I learn how to become a man and everything else with the game of football.”

Doug has continued to get bigger and stronger during his Shiner career. He enjoys playing fullback, but his first love is defense.

He recently picked up his first college offer from the University of Houston, which is recruiting him as a defensive lineman.

“It doesn’t matter where I play,” Doug said. “But if I’m at tackle or nose, I get to do whatever I want basically.”

Dalton will play a bigger role at running back this season after mostly spelling Donyai Taylor, who is playing at UTSA, last season.

“Last year was pretty fun,” Dalton said. “I bonded with the seniors we had very well. I went everywhere with them and did a lot of good things. I just got better and better over time.”

Doug doesn’t need to be reminded about Shiner’s regional playoff loss to Mason in 2018, and neither brother has forgotten last season’s heartbreaking loss to Refugio in the regional round.

But the brothers sense a difference in this season’s team.

“It’s our intensity and our team chemistry,” Doug said. “We’re always all together as one. It’s just always together as us.”

Boedeker knows if the Comanches reach their goal, the Brooks brothers will have done their part.

“They’re both special in their own ways,” Boedeker said. “It’s a great 1-2 punch in ways we can utilize them. Doug is really physical with good speed, and Dalton is an explosive playmaker. It’s a lot of fun being able to create things for them.”