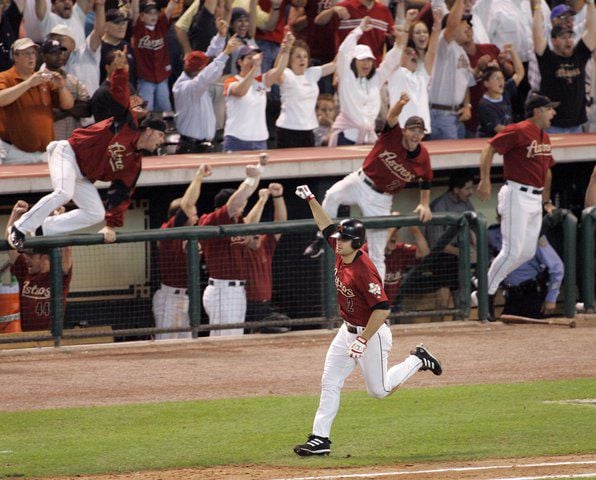 The Astros’ Chris Burke rounds the bases after hitting the game-winning home run off Atlanta Braves reliever Joey Devine in the bottom of the 18th inning in Game 4 of the National League Division Series in 2005 at Minute Maid Park in Houston. 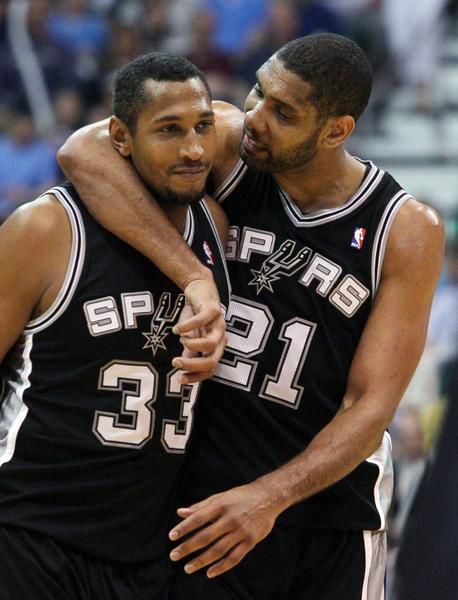 San Antonio Spurs center Tim Duncan (21) hugs power forward Boris Diaw during the second half of an NBA playoff game on May 5, 2012, in Salt Lake City. 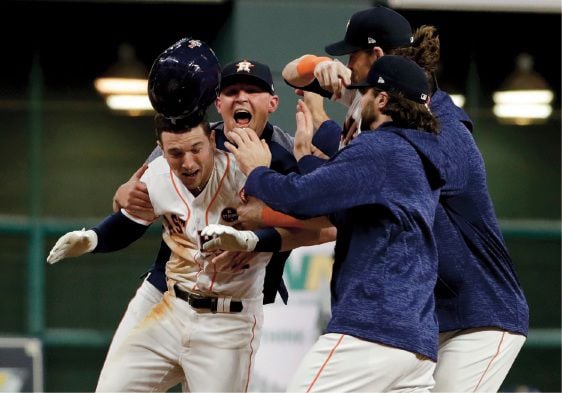 Astros players celebrate after Alex Bregman (2) hit the game-winning single during Game 5 of the 2017 World Series against the Los Angeles Dodgers in Houston. 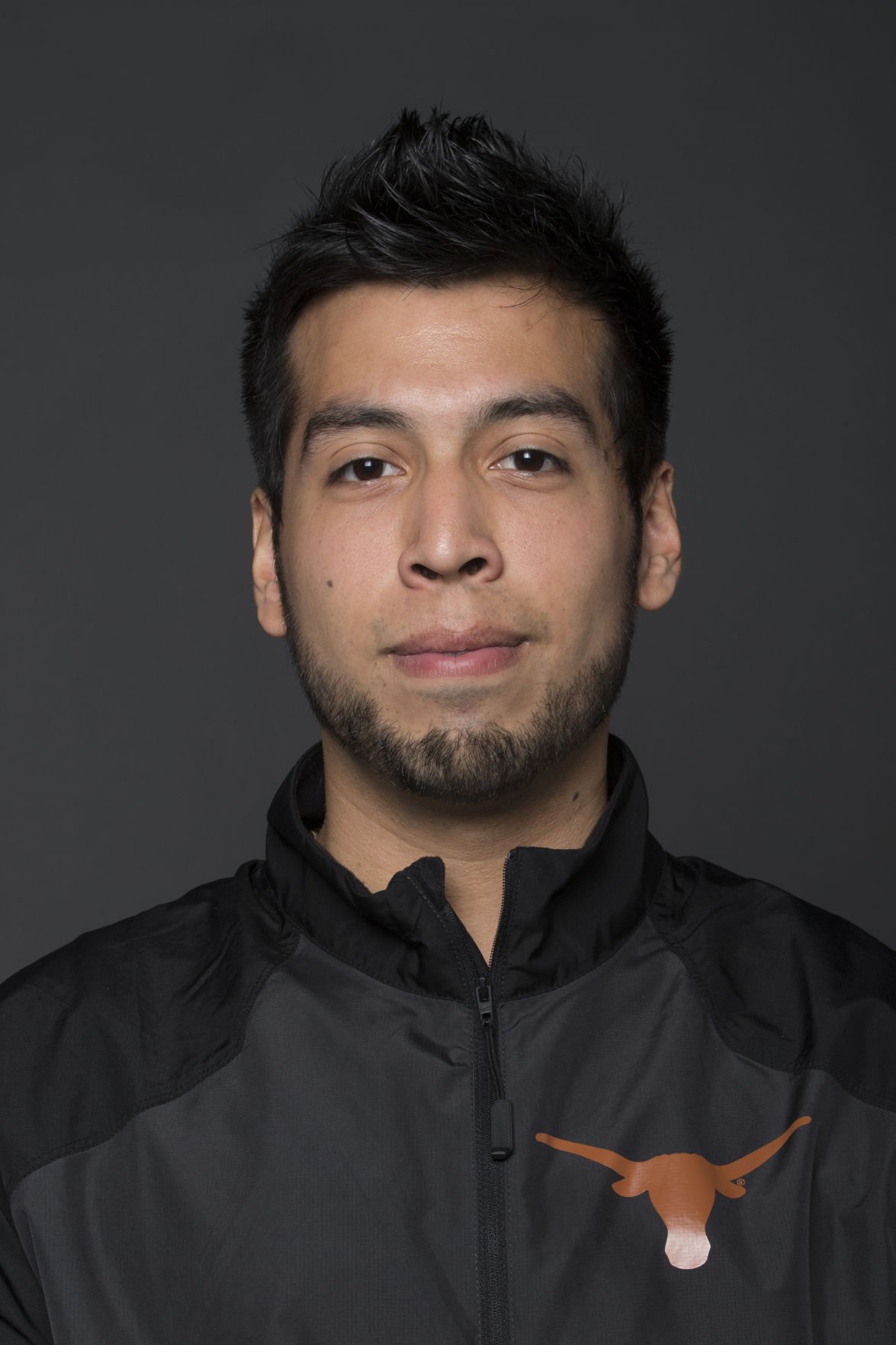 The Astros’ Chris Burke rounds the bases after hitting the game-winning home run off Atlanta Braves reliever Joey Devine in the bottom of the 18th inning in Game 4 of the National League Division Series in 2005 at Minute Maid Park in Houston.

San Antonio Spurs center Tim Duncan (21) hugs power forward Boris Diaw during the second half of an NBA playoff game on May 5, 2012, in Salt Lake City.

Astros players celebrate after Alex Bregman (2) hit the game-winning single during Game 5 of the 2017 World Series against the Los Angeles Dodgers in Houston.

I majored in journalism at Texas A&M University-Kingsville so I could become a sports writer.

Sports are what motivate me to wake up and get dressed for work. Covering sports literally pays my bills.

There are so many different sports. Whether you like football, baseball, basketball, soccer, golf or tennis, people around the world involve themselves with sports in some way.

For many, there’s a moment in sports they’ll never forget.

Maybe it was Michael Jordan breaking the heart of the Utah Jazz in Game 6 of the 1998 NBA Finals or the Boston Red Sox coming back from a 3-0 deficit against the New York Yankees in the 2004 American League Championship Series.

Most of us have a favorite sports moment we’ll always remember or hold close to our heart.

Following are my five favorite sports moments from some of my favorite teams. Just a heads up, it includes a lot of basketball and baseball.

Email me what you think, and let me know what your favorite moments are.

Everything Tim Duncan has touched has produced gold. A future Hall of Famer and a five-time NBA champion with the San Antonio Spurs.

When I think of Duncan, it’s a flashback to my childhood. I was 6 years old when he was drafted in 1997, so I grew up watching Duncan and the Spurs.

Duncan’s recent and final championship in 2014 against LeBron James and the Miami Heat is my favorite sports moment.

I was blessed to watch the Spurs win the title in person on their home court with my dad and cousin on Father’s Day.

It was a revenge series for the Spurs after the Heat upset San Antonio in Game 6 of the 2013 Finals.

Miami went on to win Game 7 that season – breaking my heart and Spurs fans around the world.

Duncan and the Spurs returned to the Finals in 2014 and won the championship.

It was only fitting that the Spurs played the Heat again.

“We’ll get it done this time,” Duncan said after the Spurs defeated the Oklahoma City Thunder in the Western Conference Finals.

Duncan kept his promise, and the Spurs defeated Miami in five games for the championship.

Say what you want about the Houston Astros.

Yes, they cheated during the 2017 season by stealing signs illegally. Yes, what they did was wrong.

They’re still the team I rooted for as a kid. Was I supposed to stop watching or cheer for another franchise? No thanks.

Game 5 of the 2017 World Series between the Astros and the Los Angeles Dodgers was one for the ages.

The Dodgers took a 4-0 lead in the top of the fourth inning at Minute Maid Park.

With Clayton Kershaw on the mound, things didn’t look good for Houston.

But the Astros got on the board with an RBI single by shortstop Carlos Correa and later in the inning, with two runners on, Yuli Gurriel stepped up to the plate.

I can still hear the voice of Fox play-by-play announcer Joe Buck loud and clear.

Seven home runs were belted that night, and there were five lead changes.

Five hours and 50 minutes. To this day, that’s still the longest I’ve ever sat in front of a television set.

The Houston Astros and Atlanta Braves played 18 innings of playoff baseball in Game 4 of the 2005 National League Division Series.

Houston and Atlanta were meeting for the second straight season in the NLDS.

Atlanta took a 6-1 lead in the eighth inning, and it looked like there would be a winner-take-all Game 5.

But Lance Berkman and Brad Ausmus had other plans.

Houston loaded the bases and Berkman blasted a grand slam into the Crawford Boxes in left field to make it a 6-5 game at Minute Maid Park.

The Astros were down to their final out in the ninth inning when Ausmus, who only had three home runs during the regular season, tied the game at 6 on a solo home run.

Both teams played another nine innings until Chris Burke stepped up to the plate.

Burke, like Ausmus, wasn’t known for his home run hitting power. But it didn’t matter.

Burke sent one flying into left field off of Joey Devine to send the Astros to the NLCS for a rematch with the St. Louis Cardinals.

The two most famous words in sports. Game Seven.

The San Antonio Spurs and Detroit Pistons dominated on their home court to start the 2005 NBA Finals.

The Spurs took a 2-0 series lead before the Pistons answered at home with two consecutive wins.

Detroit would have won Game 5 if it wasn’t for Robert Horry, also known as, “Big Shot Rob.”

The Spurs lost in Game 6 – setting up Game 7 in San Antonio.

The game went back-and-forth, and the Pistons held on to a 39-38 halftime lead.

The game remained close until the fourth quarter when Manu Ginobili and Tim Duncan took over.

The two combined for 48 points and the Spurs held on for a 81-74 win. It was the third championship for San Antonio and its second in three seasons.

Love them or hate them, the Houston Astros winning the 2017 World Series, for me, was one of my favorite moments in sports.

As I mentioned earlier, I’ve been a fan of the Astros since I was a kid.

With the development of Jose Altuve, George Springer and Carlos Correa, I knew the future was bright for the organization.

The addition of Justin Verlander at the trade deadline was also a game-changer for Houston in 2017.

The Astros met the Los Angeles Dodgers in the World Series and as expected, they were no easy task.

It took seven games, but Houston was able to win its first championship in franchise history.