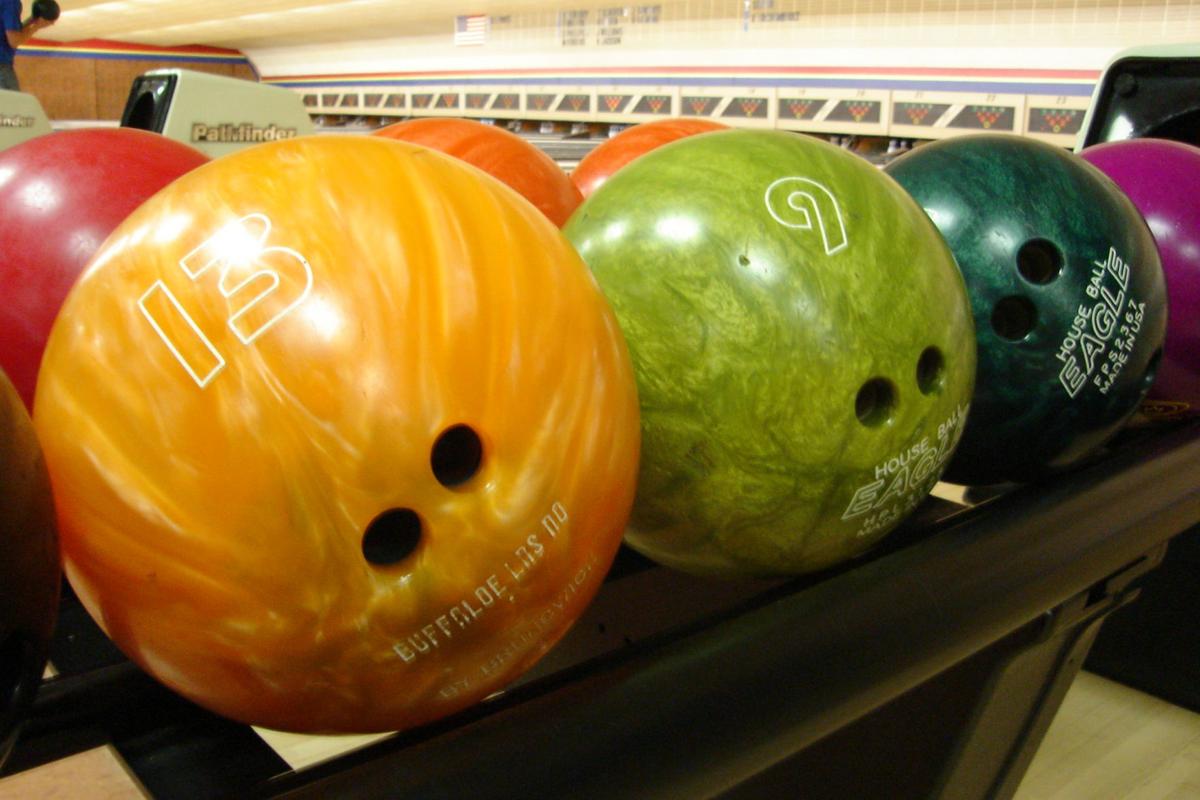 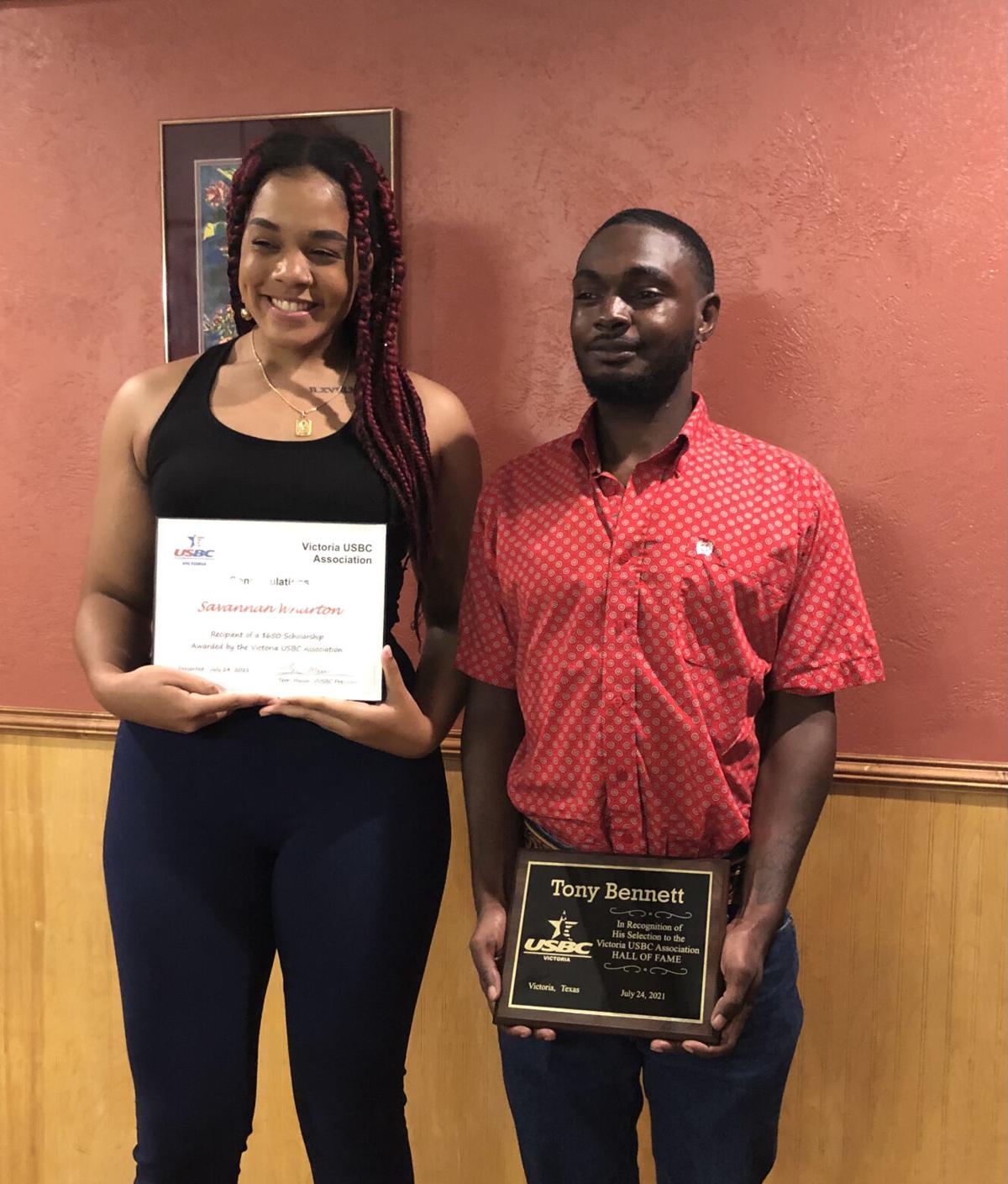 Savannah Wharton was awarded a scholarship and Tamarcus Bennett accepted his father, Tony’s, posthumous induction into the Hall of Fame during the VUSBC Awards dinner at Vera Cruz Restaurant.

Savannah Wharton was awarded a scholarship and Tamarcus Bennett accepted his father, Tony’s, posthumous induction into the Hall of Fame during the VUSBC Awards dinner at Vera Cruz Restaurant.

Tom Crowe rolled another vintage series with a 24 strike performance and one open frame during last weeks’ Rolling Thunder League play. He rolled individual games of 227, 278 and 241 to total 746 for the night to earn the weekly honors. He carried the good stroke into the Texas Senior Mixed Tournament last weekend where he posted a 720 scratch score in the singles event.

Steve Zeplin, Crowe’s teammate, also broke the 700 mark with an impressive set of 713 with games of 234, 256 and 223. Zeplin also had one open frame with a split to start the second game.

The high score for the women was posted by Sandy Speck with a 493.

Robert Lyman had great timing during last Tuesday’s Funtapper no tap league. He recorded games of 300-300 and 290 for an outstanding 890 series. Lyman’s actual strike count per game were 11-10 and 7 for an impressive 28 total. Dave Matthews also broke the 800 mark with an 808. Samantha Wharton rolled the high score for the women with a 264-687.

The unofficial final results have been posted on the texasbowling.com website for the 41st Texas Senior Mixed Tournament. Two local teams are listed in the top 10 with Tucking Fenpin holding down the 5th spot with a four person score of 2,706. Team members are Terri and Glenn Mason and Lori and Bruce Hammack. The team Fricking Ten Pin (2,695) is tied for 7th place with members Christine Speer, Justin Tweedle, Lindy Conner and Robert Lyman. In the women’s singles event Terri Mason is tied for 15th place with a score of 699 and is in first place in her age division in all events with 2,115. In Men Doubles: Lyman and Conner (1,439) are in 4th place and Dave Matthews and Tom Crowe (1,394) are tied for 7th place. In Mixed Doubles Terri and Glenn Mason (1,350) are in 40th place. In Men’s Singles, Mike Stacy (758) is in 14th, Lyman (736) 25th, and Crowe (720) 39th . Lyman (2,096) is in 3rd place in his All Events age bracket.

Tony Bennett was inducted posthumously into the local Hall of Fame with his son Tamarcus accepting the award. Tony was an association board member and also youth director for many years. He was also a good bowler having scored a 300 game and two 802 series. Sadly he passed away in November of last year.

Savannah Wharton was awarded a VUSBC Scholarship for the second year to help with her continuing college education. Congratulations.

It is with sadness that I note that two former Victoria league bowlers have passed away recently.

The most recent was David W. Snell on July 22 at the age of 76. David started bowling in the Pinbusters League during the 1984-85 season. He continued to bowl in various league until 2017 when his health prevented him from continuing to enjoy the sport. I enjoyed having competed against David in the Red River and Over The Hill leagues.

The second bowler was Robert W. Williams, who passed on July 15. Robert was a DuPont League bowler in the mid 1980’s. My sympathy and condolence go out to both families.

Texan Shawn Maldonado won for the second time in 2021 and his second career victory by winning the PBA Lubbock Sports Open last weekend by defeating Jake Peters. He credits his improved spare shooting for the top seed position going into match play. Peters advanced in the step-ladder finals by defeating Dino Castillo 230-176 and Anthony Simonsen 263-212. In the championship match fifth frame, Peters rolled a gutter ball on the first ball and totaled nine for the frame. Maldonado working on a double was hoping to take advantage but he left the 7-10 split in the same frame. After the split he was able to string strikes and pull away for a 222-199 win. The second of five PBA Summer tour events will be held in Houston this weekend with the 21st Annual PBA/PWBA Striking Against Breast Cancer Mixed Doubles Tournament.