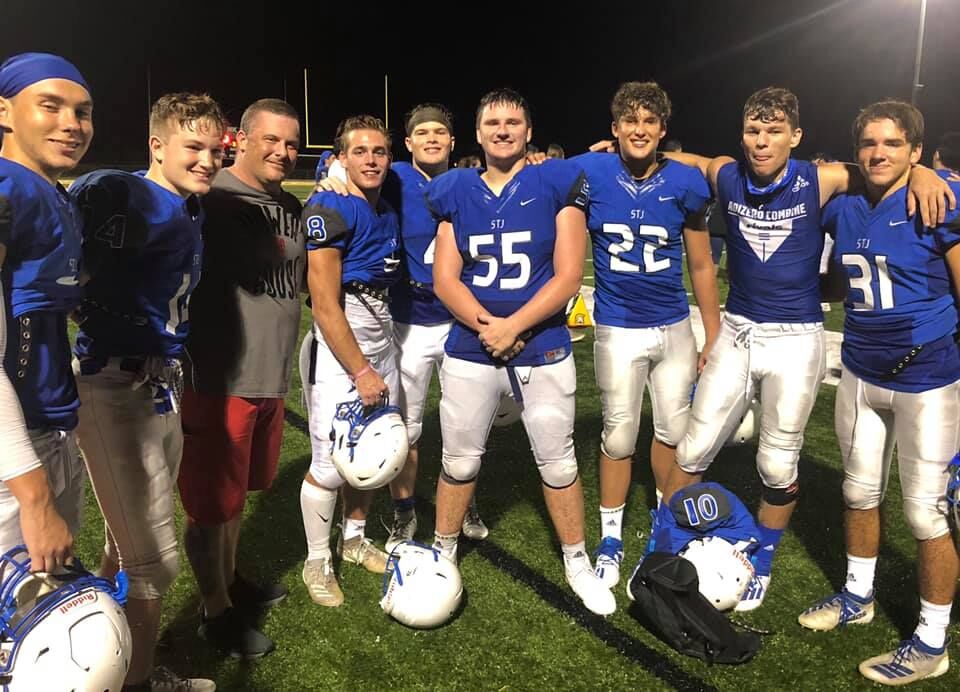 Doug Zelkowski, third from the left, with members of the St. Joseph Flyers football team. 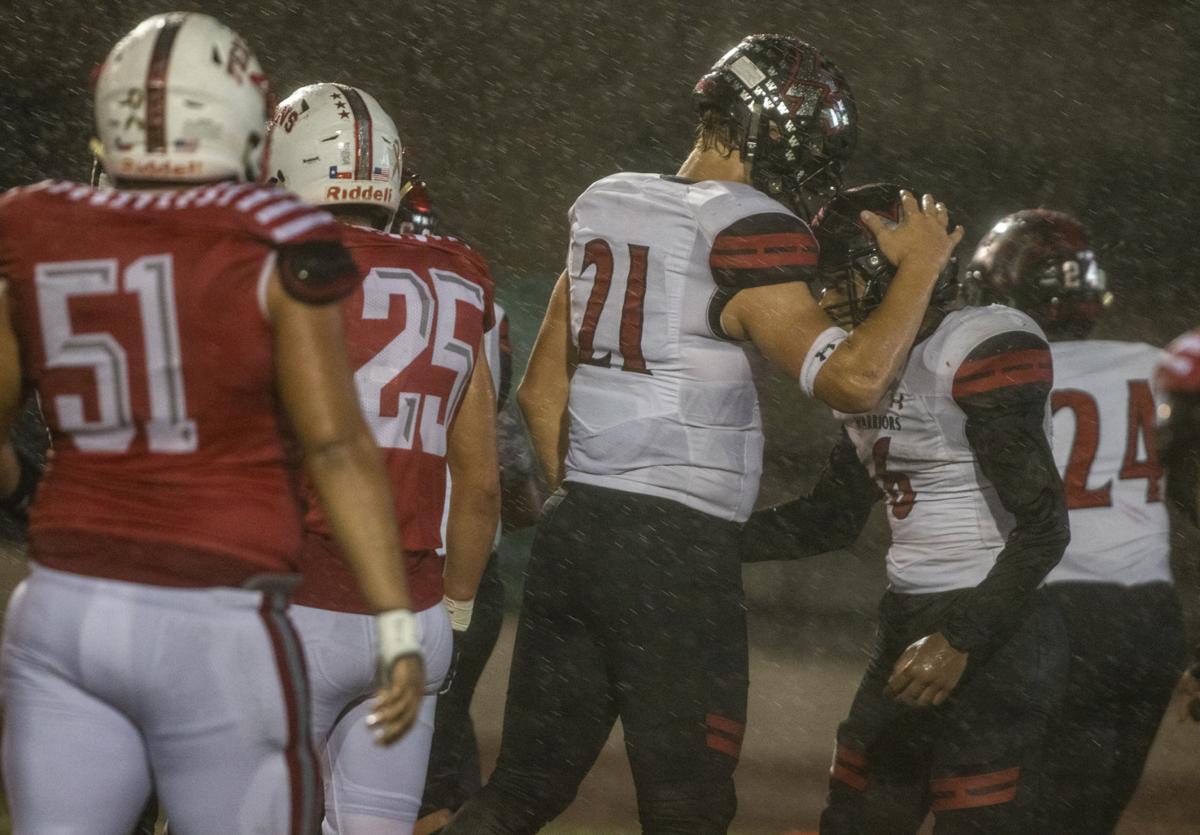 Victoria West wide receiver Colten Matus celebrates with quarterback Donovan Harris after scoring a touchdown in a District 15-5A, Division I game against Corpus Christi Ray at Buccaneer Stadium in 2019. 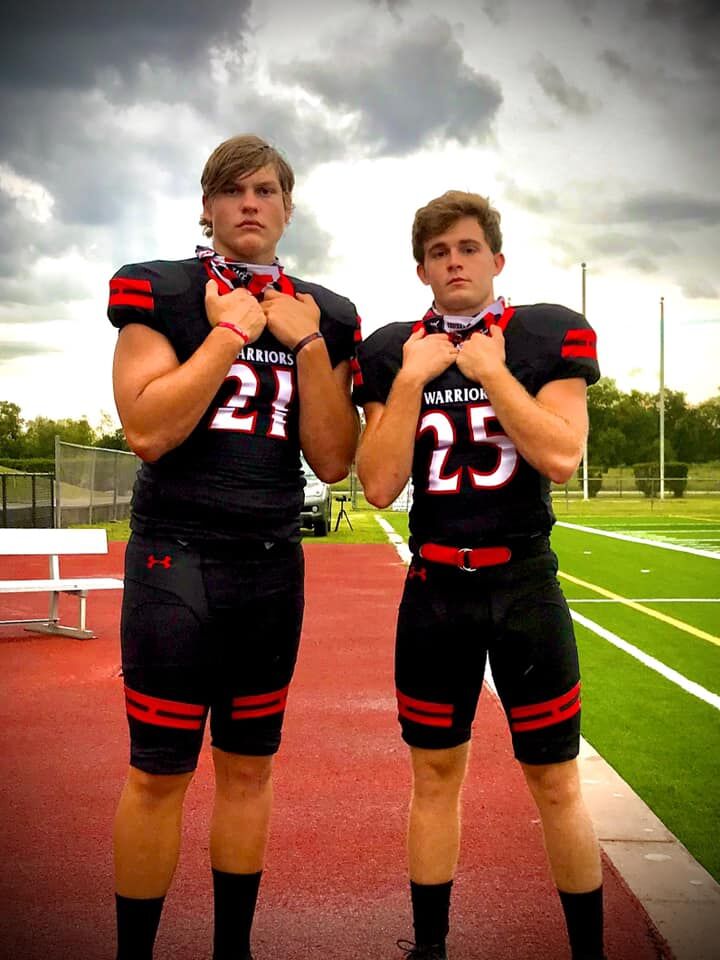 Doug Zelkowski, third from the left, with members of the St. Joseph Flyers football team.

Victoria West wide receiver Colten Matus celebrates with quarterback Donovan Harris after scoring a touchdown in a District 15-5A, Division I game against Corpus Christi Ray at Buccaneer Stadium in 2019.

Matus fell into a dark place at the thought of being unable to compete again or earn the chance to play at a higher level. But through help, he persevered.

In July, Matus had joined Z’s Powerhouse, a private gym run out of the home of Doug Zelkowski, an Air Force veteran and powerlifter.

With Zelkowski’s help, Matus went from possibly missing the whole year, to recovering in five and a half months to play in West’s final two regular season games and the playoffs.

“It was very mentally strengthening for him because he was afraid that he wasn’t ever going to play football again,” Zelkowski said. “As a senior it’s hard for them to let go of a sport that you might never play again.”

Zelkowski used a series of mobility exercises to strengthen Matus’ quads and hamstrings, while at the same time working to maintain his upper body strength.

Matus stayed consistent with his workouts and progressed further with each doctor’s approval and eventually got the final go ahead to return to football practice.

“(Doug) taught me a lot about persevering and never giving up, especially going through my injury and having a lot of dark times,” Matus said. “He was always there to tell me ‘You’re going to get over this. It is what is is, it’s just another experience that’s going to make you stronger.’”

Zelkowski has lived in Victoria for five years but Z’s Powerhouse only got off the ground in 2020.

“Our big thing we provide is corrective form, conditioning and proper weight room etiquette,” Zelkowski said. “But the biggest thing we offer that most places don’t is a family based atmosphere.”

With most trainers Dry had worked with, he worked out for an hour and didn’t hear from the trainer till the next day.

With Zelkowski, he was texting them day and night, always ready to talk about how their training was going and any issues they might be suffering from.

“I’ve never met someone who cares so much, he was there for me all season,” Dry said. “I went through a good amount of injuries my senior year and he helped me through everything.”

Originally from Mingo Junction, Ohio — a town of 3,000 people — Zelkowski joined the Air Force when he turned 18 and was in boot camp when the Sept. 11 attacks occurred. He served 10 years in Iraq and came to Texas after leaving the military.

From there he found work as a paramedic, first in Port Lavaca and then in Victoria.

Zelkowski’s time as a paramedic took its toll on his psyche and he eventually was forced to quit.

After a few bad decisions, Zelkowski said, he went through a divorce and his now ex-wife moved to Kingwood with his three sons.

The one thing that saved him was getting back to powerlifting.

“Without my training, I would nowhere be the man I am now,” Zelkowski said. “Having a daily routine that really pressed your body and pressed your mental stability was super important. Couple things seen as a paramedic really broke me, couldn’t get past that. Then I was able to get into lifting and that was able to clear my mind for two hours a day.”

Zelkowski admits he does not sugar coat anything. He does not tell everyone they can be Division I athletes, but he is ready to help anybody work toward that goal.

Matus went so far as to call Zelkowski a father figure for how he’s helped him. Something that made Zelkowski tear up.

“That’s huge. I try to treat each one of those kids exactly how I treat my children,” Zelkowski said. “I give them the same respect, I go to all their stuff. I can’t even tell you how many football and now basketball and volleyball games I’ve been to. So it makes me smile a lot to hear that.”

After the impact he made in his first year, Zelkowski is hoping the gym continues to grow.

“Me and Carter were the guinea pigs when we started,” Dry said. “Now that I’m older and he’s bringing in younger clients, I help the younger clients, Doug’s trained us older guys to be there for them and teach them. We just want them to experience what we’ve experienced.”