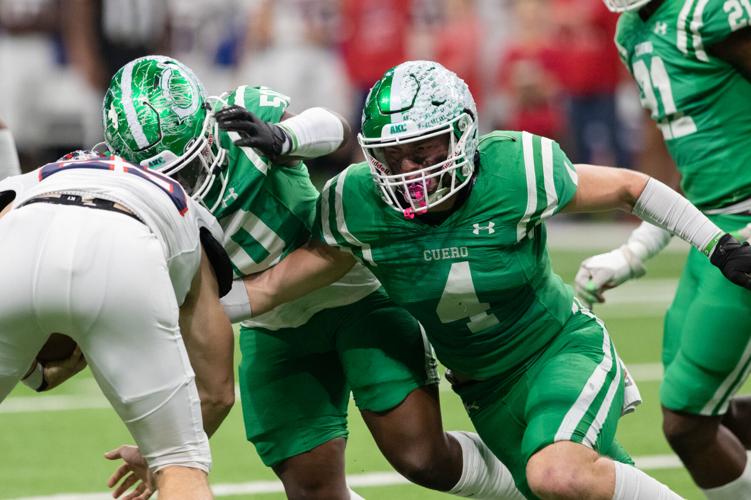 Cuero’s Sean Burks and Javaree Bacon go for a tackle during the Class 4A, Division II state semifinal against Wimberley at the Alamodome. 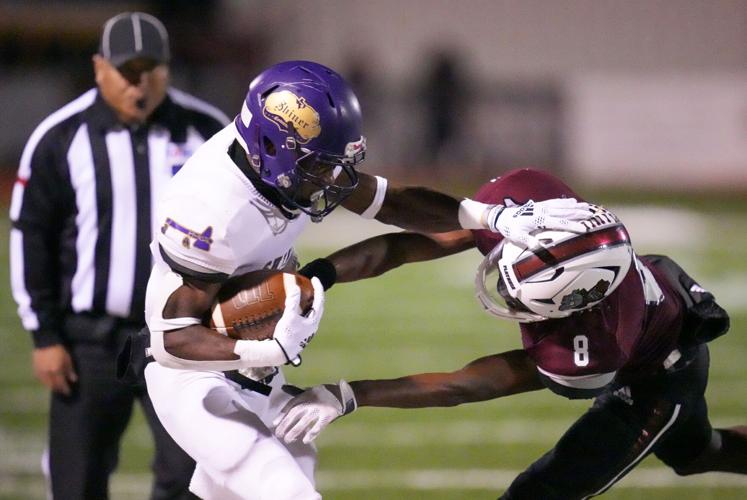 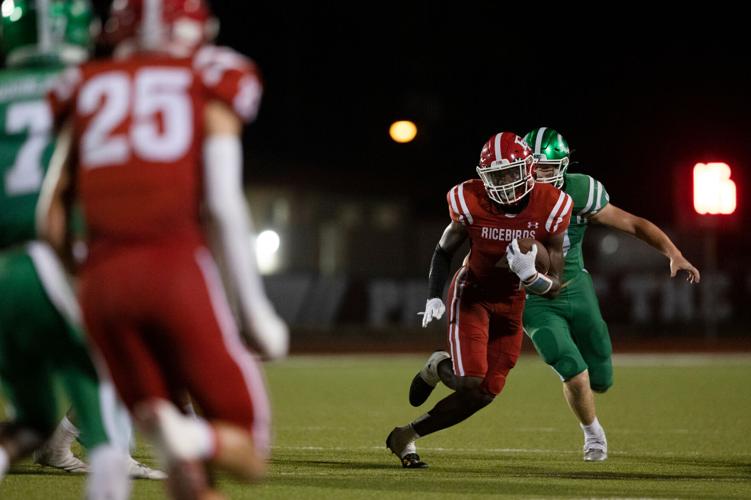 Cuero’s Sean Burks and Javaree Bacon go for a tackle during the Class 4A, Division II state semifinal against Wimberley at the Alamodome.

Sean Burks played an important role in Cuero’s run to the Class 4A, Division II state semifinals in 2021.

The Gobblers returned to the semifinals in 2022, but Burks was hoping to take it a step further.

“They say when you’re a freshman, your goal is just to have fun,” Burks said. “Your sophomore year, your goal is to get on varsity and maybe get playing time. Your junior year, get as many stats as you can. Your senior year is just getting as many wins as you can. My senior year, I just mainly wanted to do what it took and whatever I had to do to help get it done.”

Cuero linebacker Sean Burks determined to go out on top

Brooks was also a second-team selection as an all-purpose player along with El Campo running back Rueben Owens on the overall MaxPreps All-America Team.

The 6-2, 190-pound Brooks, who has signed with Texas A&M, played running back and in the secondary for the Comanches.

He rushed for 2,530 yards and 37 touchdowns, and had six receptions for 202 yards and five touchdowns. He also had 120 tackles, including 41 solo tackles and four for losses, broke up five passes and had five interceptions and returned one for a touchdown.

Brooks helped Shiner advance to the Class 2A, Division I regional final last season after it won state titles in his sophomore and junior seasons.

The 5-foot-11, 190-pound Owens has already enrolled at Texas A&M. He rushed for 1,781 yards and 25 touchdowns and 123 receiving yards and one touchdown last season.

The 5-11, 205-pound Burks was selected at linebacker on the small town team after leading the nation in tackles for the second straight season.

“The defense that we are in is designed for me to get the tackles,” Burks said. “If they’re trying to run outside, our outside backers just turn them in. If running to the strong side, (linebacker) Brandt (Patek) would take on the blockers after the outside backer already turned them in, so it’s just a one-on-one tackle situation with me and him. Fortunately, I’ve been good enough to recognize the run game and read fast and I’ve got lots of practice.”

The 6-2, 220-pound Moore was chosen as an offensive lineman.

He played tackle for the Bobcats and graded out at 98% with no sacks given up in 16 games. He also had 34 pancake blocks.

Moore helped the Bobcats average 400 yards per game en route to their first Class 2A, Division I state final appearance since 2019.

The 6-3, 305-pound Jurgajtis was selected as an offensive lineman.

He played center and tackle for the Beavers and has been selected to play in the Blue-Grey All-American Game, after earning all-state honors as a junior.

Falls City averaged 300 yards per game, including 250 yards on the ground. The Beavers rebounded from a 1-4 start and advanced to the Class 2A, Division II regional semifinals.