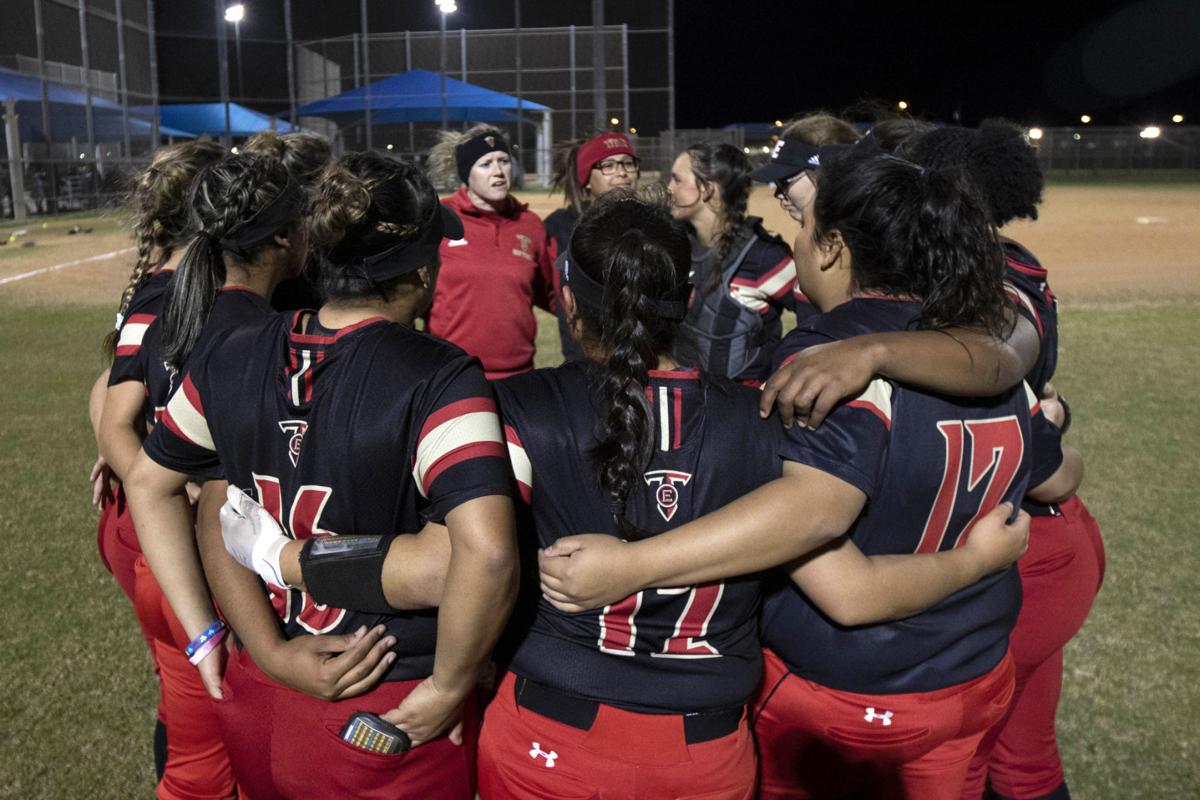 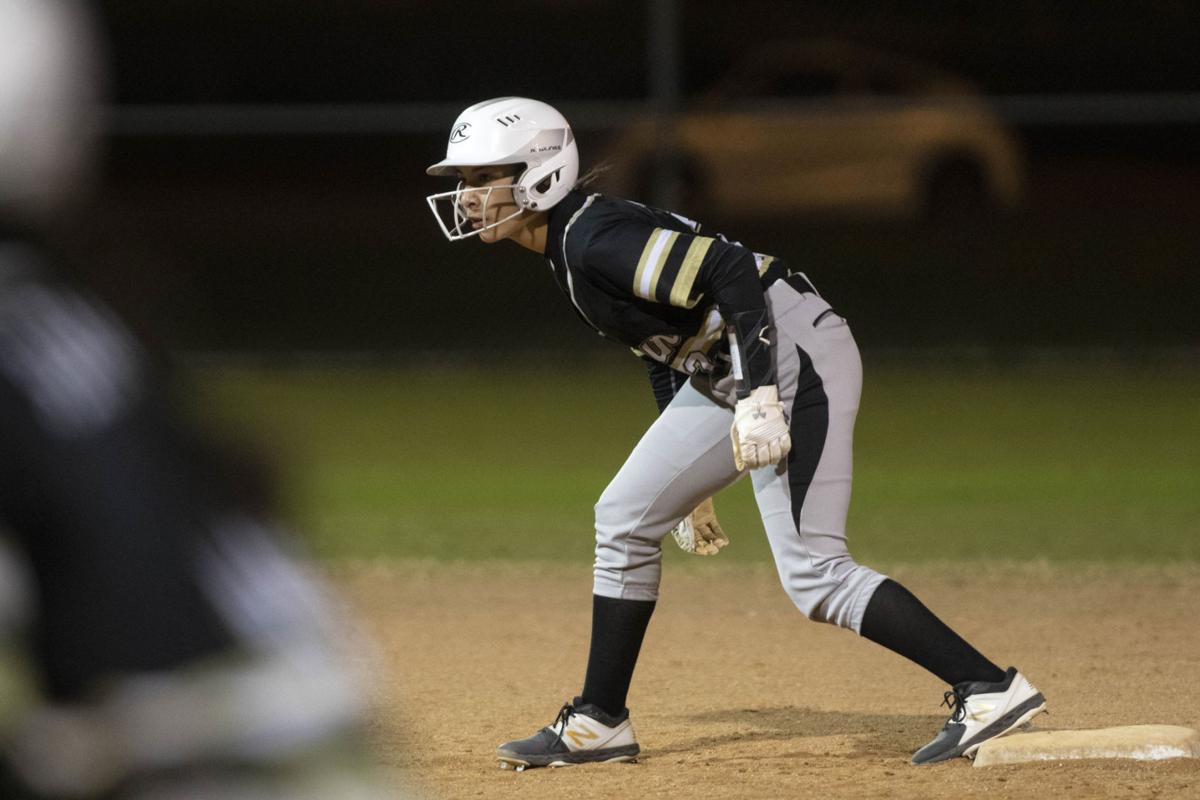 Calhoun’s Amri Gaona takes a running stance at first base in a game against Victoria East at Victoria Youth Sports Complex. 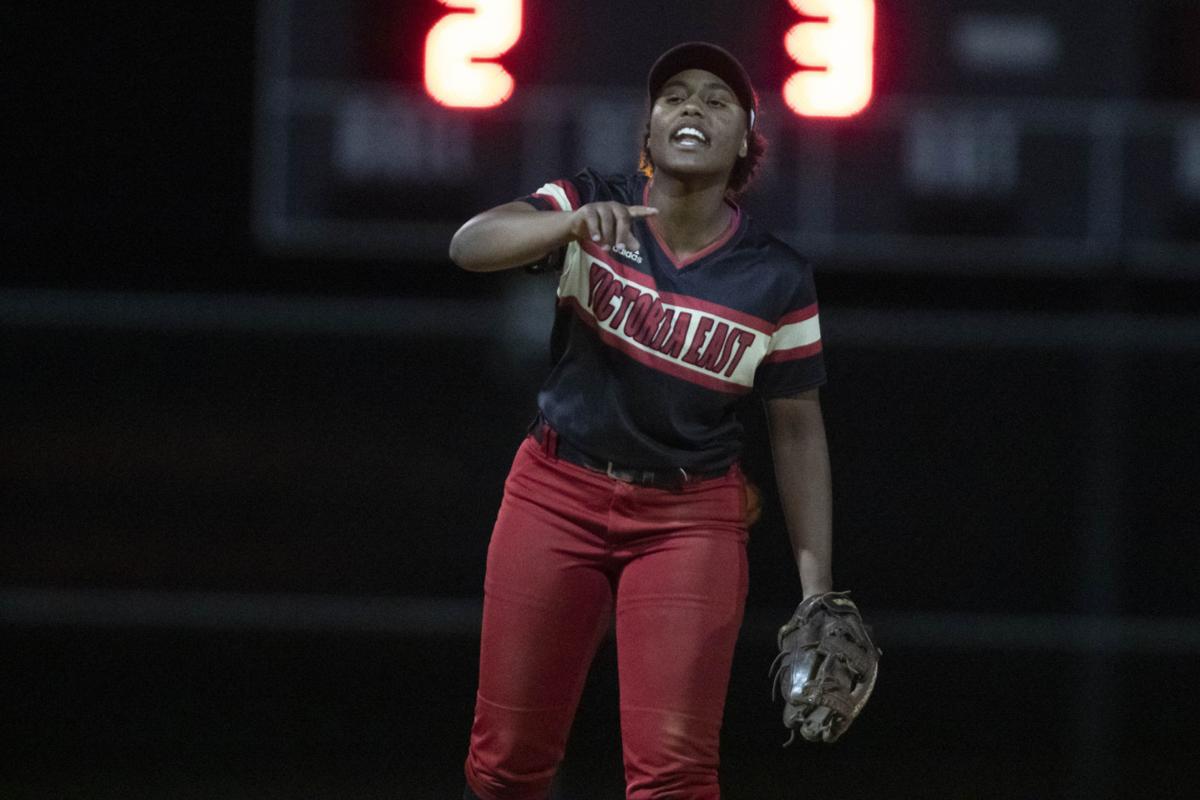 {p class=”p1”}Victoria East shortstop A’Nasia Wallace talks to her teammates during Tuesday’s District 30-5A game against Calhoun at the Victoria Youth Sports Complex.{/p}

Calhoun’s Amri Gaona takes a running stance at first base in a game against Victoria East at Victoria Youth Sports Complex.

{p class=”p1”}Victoria East shortstop A’Nasia Wallace talks to her teammates during Tuesday’s District 30-5A game against Calhoun at the Victoria Youth Sports Complex.{/p}

Tournaments are early stages in a season for a team to figure out which players will bring the most to success to any one team. The chance to play one in your backyard makes it that more convenient.

With playoff contenders from the Crossroads and the Coastal Bend descending upon the Victoria Youth Sports Complex, Victoria East will have stout competition as the Lady Titans try to find a winning lineup.

“Hopefully we can figure out what our best nine out there in a lineup are,” said East head coach Melissa Buck. “Offensively, still trying to feel our way around where some people fit, who fits, who doesn’t. I wouldn’t say we’ve had a whole lot of repeated success in that area even though we tried several things last week.”

As East fields a young pitching staff, the Lady Titans’ offense is expected to carry the team.

East showed power against Corpus Christi Veterans Memorial on Tuesday as the Lady Titans led 4-0 after the first inning but lost 12-6 to the district rival.

Now the goal is to sustain that power. The tournament gives East a chance to find that winning lineup without the risk of a loss counting on its record.

“The nice part is we get to stay home, we don’t have to travel,” Buck said. “It’s a lot of traveling going back and forth three days in a row.”

Victoria St. Joseph, Calhoun, Beeville and El Campo are the other area teams competing this weekend.

St. Joseph and Calhoun are viewing the tournament in a similar way to East as both teams are fielding young squads looking for experience.

“We’re old but young because I had a lot of juniors last year that were first time varsity players and that season got cut shorts,” said Calhoun head coach Daniel Castillo. “You can notice how nervous they get before a game, but once they start playing, once the game starts, they seem to be doing okay.”

St. Joseph came from behind to defeat Industrial 5-4 in its opening game of the season and head coach George Clay is hoping the Lady Flyers can continue to progress in each game.

“I learned that my team’s got a lot of fight,” Clay said. “We were able to come out with a win because they never gave up. They don’t get down on themselves. They know what they can do and I think we’re going to be a team to contend with anybody in our area.”

Victoria West notably will not be attending as the Warriors are competing in the Weimar Tournament this weekend.

Other teams competing include District 29-5A’s Flour Bluff, CC Moody and CC Carroll, the latter having defeated No. 3 Gregory-Portland 15-1 on Tuesday.

CC John Paul II, Sinton and Rockport-Fulton, the No. 1 team in Class 4A by the Texas Girls Coaches Association, round out the Coastal Bend schools

Overall, the matchups give the Crossroads teams a chance to compete against perennial playoff contenders and see where they need to improve before getting into the thicket of district play.

“The good thing about tournaments is we’re always playing games,” Castillo said. “Not being able to play our first week cause of the weather, tournaments always help you out cause you get to play a lot more games and you get to see what other players can do.”