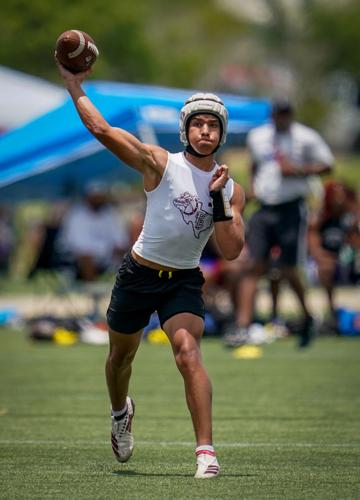 Quarterback Fidel Venegas, of Flatonia, delivers a pass to one of his receivers against Palmer High School in College Station on June 24, 2021. 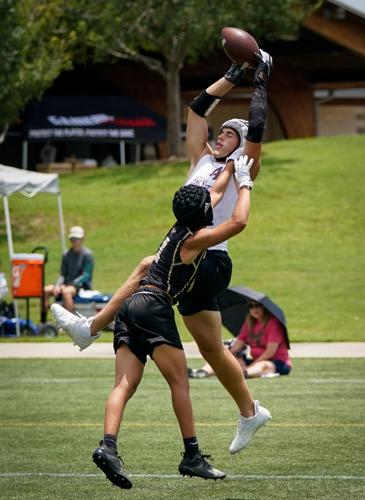 Wide receiver Holden Kloesel of Flatonia lept high in the air to catch one of his two of his touchdown catches against Palmer High School on June 24, 2021. 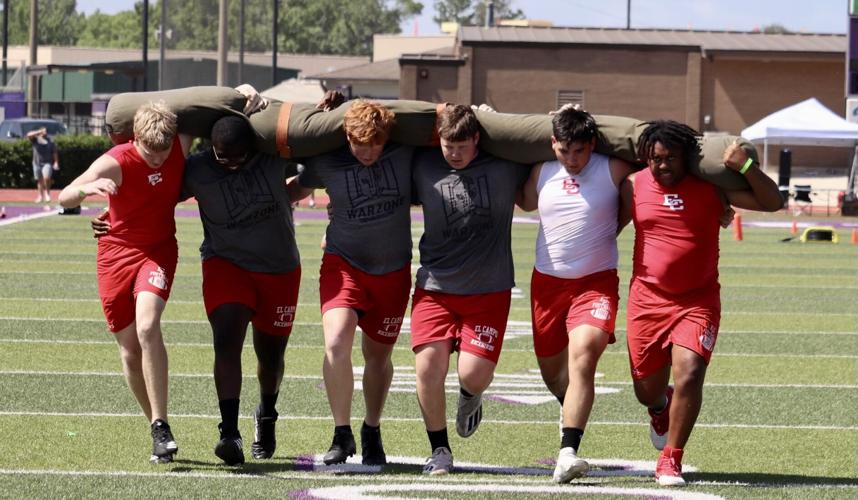 El Campo linemen compete in the worm carry during the Willis LineMAN Challenge. El Campo will attempt to defend its Division II state title at the State LineMAN Challenge set for Saturday at Hardin-Simmons University in Abilene.

Quarterback Fidel Venegas, of Flatonia, delivers a pass to one of his receivers against Palmer High School in College Station on June 24, 2021.

Wide receiver Holden Kloesel of Flatonia lept high in the air to catch one of his two of his touchdown catches against Palmer High School on June 24, 2021.

El Campo linemen compete in the worm carry during the Willis LineMAN Challenge. El Campo will attempt to defend its Division II state title at the State LineMAN Challenge set for Saturday at Hardin-Simmons University in Abilene.

Goliad bases its offense out of the slot-T, but the Tigers also utilize the shotgun and want to be able to throw the ball.

Goliad coach Kevin Salazar is convinced playing 7on7 gives his team a head start heading into the fall.

“We’re going to have a new quarterback this year,” Salazar said. “We feel like we’re going to do some things offensively to get the ball down the field. This helps build the chemistry between our quarterback coming in and some of our receivers, tight ends and running backs.”

Goliad is one of five area teams that will compete in the 7on7 state tournament scheduled for Thursday and Friday at Veterans Park and Athletic Complex in College Station.

Area teams eliminated in first round at state tournament

COLLEGE STATION — Tycen Williams was about to start eighth grade the last time Cuero played in the state 7on7 tournament.

“The main thing is for our kids to compete,” said Tidehaven coach David Lucio. “They get to see kids from throughout the state. We want them to have fun because we want them to strive to get back. This is our third year in a row and the kids know it’s a fun trip. It’s almost like if you work hard enough and you do good enough, you get to go to Disney World.”

Robert Jones enters his third season as head coach at Bay City and he hopes the success the Blackcats have had in 7on7 will speed up the rebuilding process.

“Even though there’s not any contact, the kids are getting out there and throwing the ball around and learning the coverages and kids playing together increases that family atmosphere,” Jones said. “That’s a big thing when we’re trying to build a program and get the kids involved all summer. We had a successful track season and have done well in 7on7 (23-4). We hope it gets the kids to believe and get the kids to buy into what we’re trying to do.”

Quarterbacks have four seconds to throw the football in 7on7 and don’t have to worry about a defensive rush.

“It gives our quarterback the opportunity to read a defense,” said Flatonia coach Chris Freytag, whose team is making its third consecutive appearance at the state tournament. “Regardless of whether you have a big defensive end coming at you or you know he’s not coming at you because it’s 7on7, you still have to read the secondary and understand where the ball needs to go.”

Perhaps the biggest benefit of 7on7 is the opportunity for the players to stay with each other throughout the summer.

“The biggest thing to me is that the kids get to compete together,” said Ganado coach Josh Ervin. “Some of them are playing select baseball and they’re going out playing baseball with kids from down the road. It’s Ganado. It’s just us.”

“The biggest thing we preach to our kids is getting out and competing,” Salazar said. “They’re getting in our system and just being out and being active, but doing it as a team and kind of building that bond with their teammates. It will allow them to compete against some other great teams around the state. Hopefully, this will get them excited as we go to the summer and get ready for two-a-days.”

Each team will play three games in pool play Thursday beginning at 1 p.m. before playing at least one single-elimination game Friday.

El Campo will attempt to defend its Division II State LineMAN Challenge title Saturday at Shelton Stadium on the campus of Hardin-Simmons University in Abilene.

The challenge includes competition in 11 events ranging from a forward tire throw, to bench press to a tug of war.

EL CAMPO — A group of El Campo players will board a bus Thursday headed to College Station.

Tidehaven has also qualified for the state competition.

“It’s a good mixture of the different skills that it takes to be successful. The things that go into being a good lineman — good feet, good strength, good speed, good agility along with competitiveness. It measures those things.”

El Campo's Owens won over during visit to Louisville

Rueben Owens didn't know much about Louisville before taking his official visit over the weekend. The El Campo senior was won over after the visit and is now committed to play for the Cardinals.