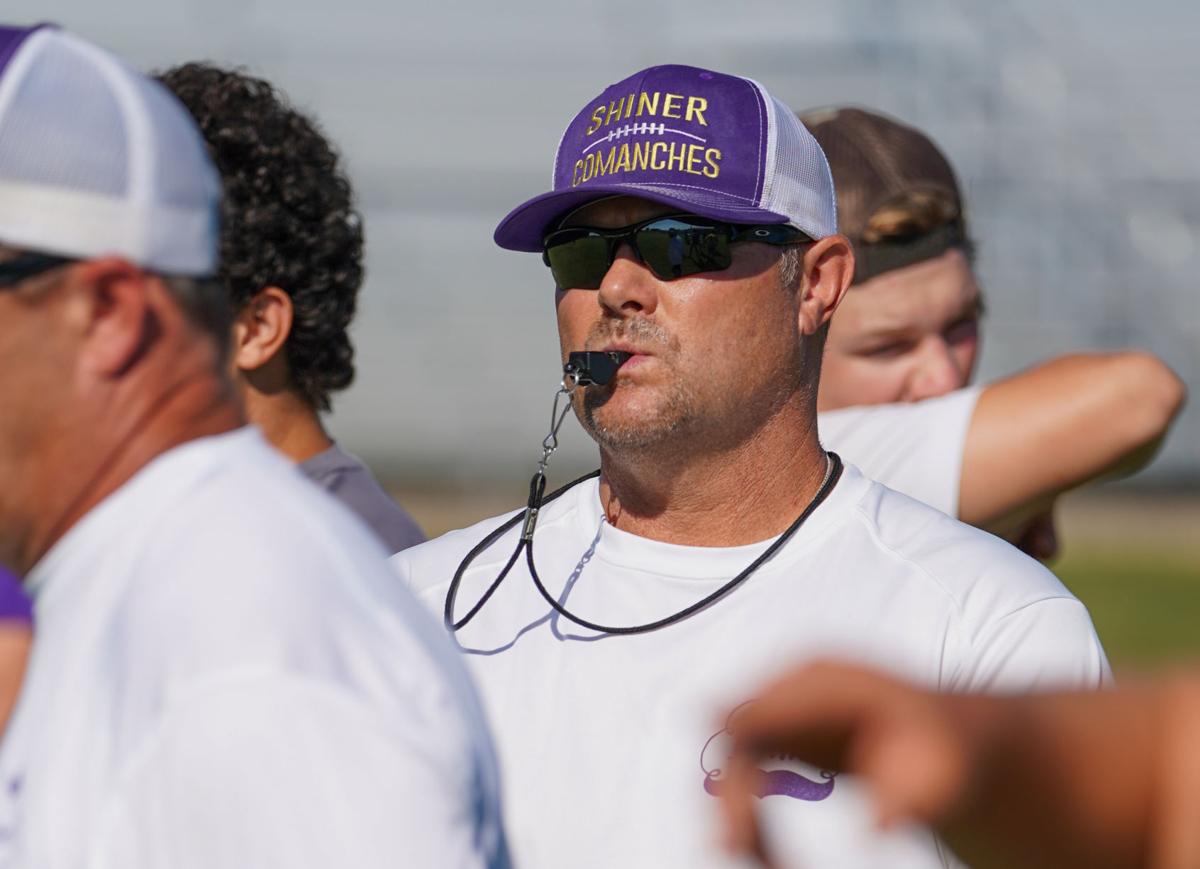 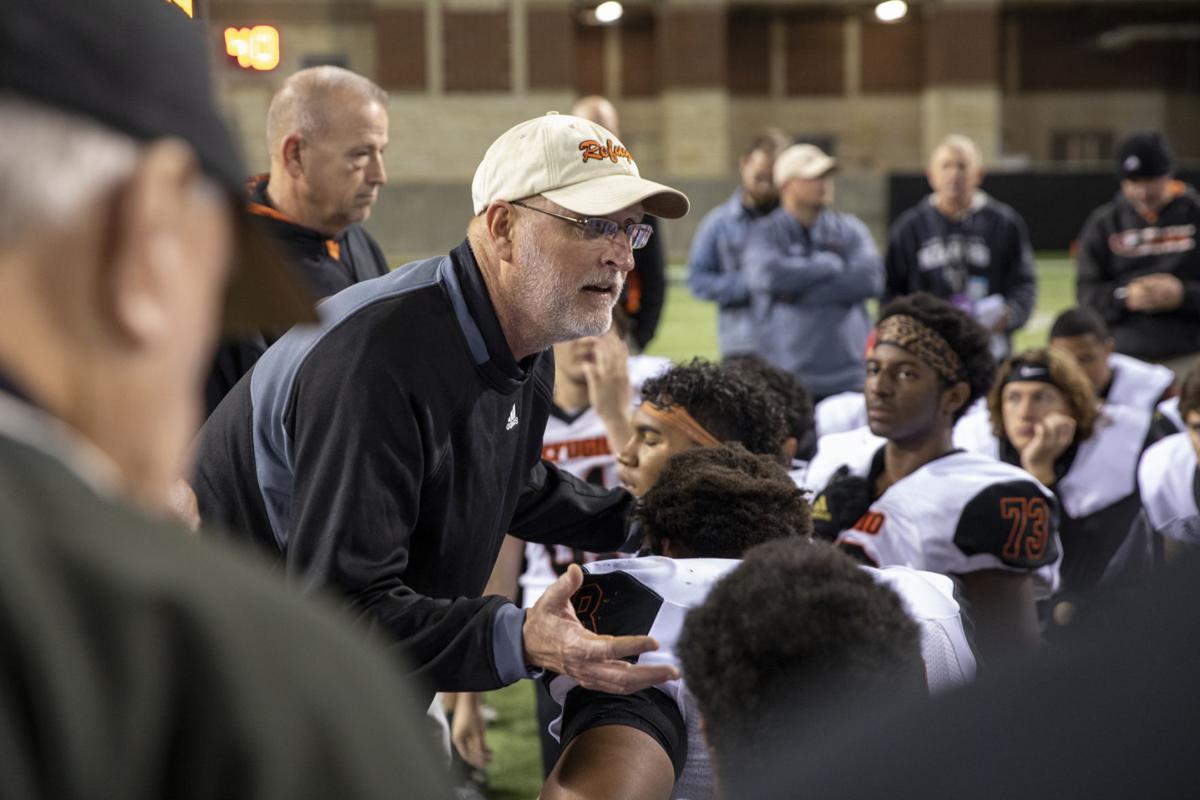 Refugio head coach Jason Herring talks to the Bobcats after winning the Class 2A, Division I semifinal against San Augustine at the Berry Center. 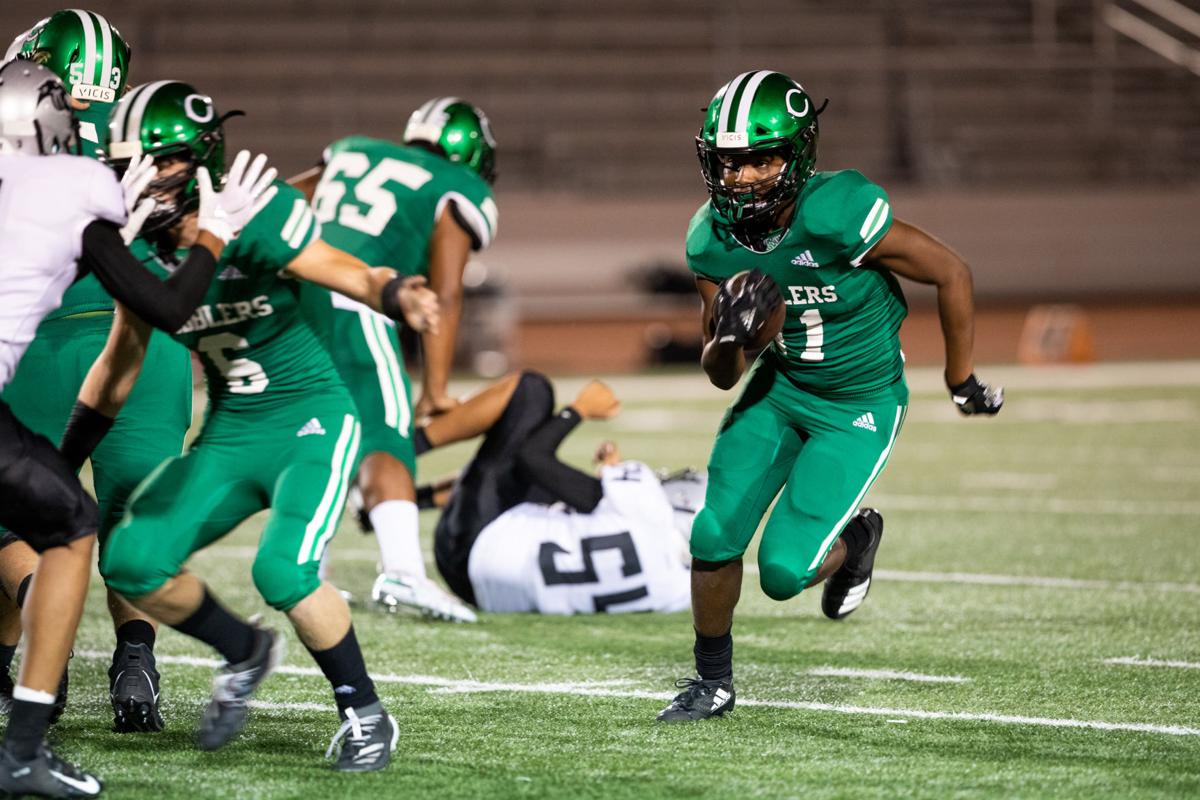 Cuero running back Tycen Williams runs down field during a District 13-4A, Division II game against Eastside Memorial at Gobbler Stadium. 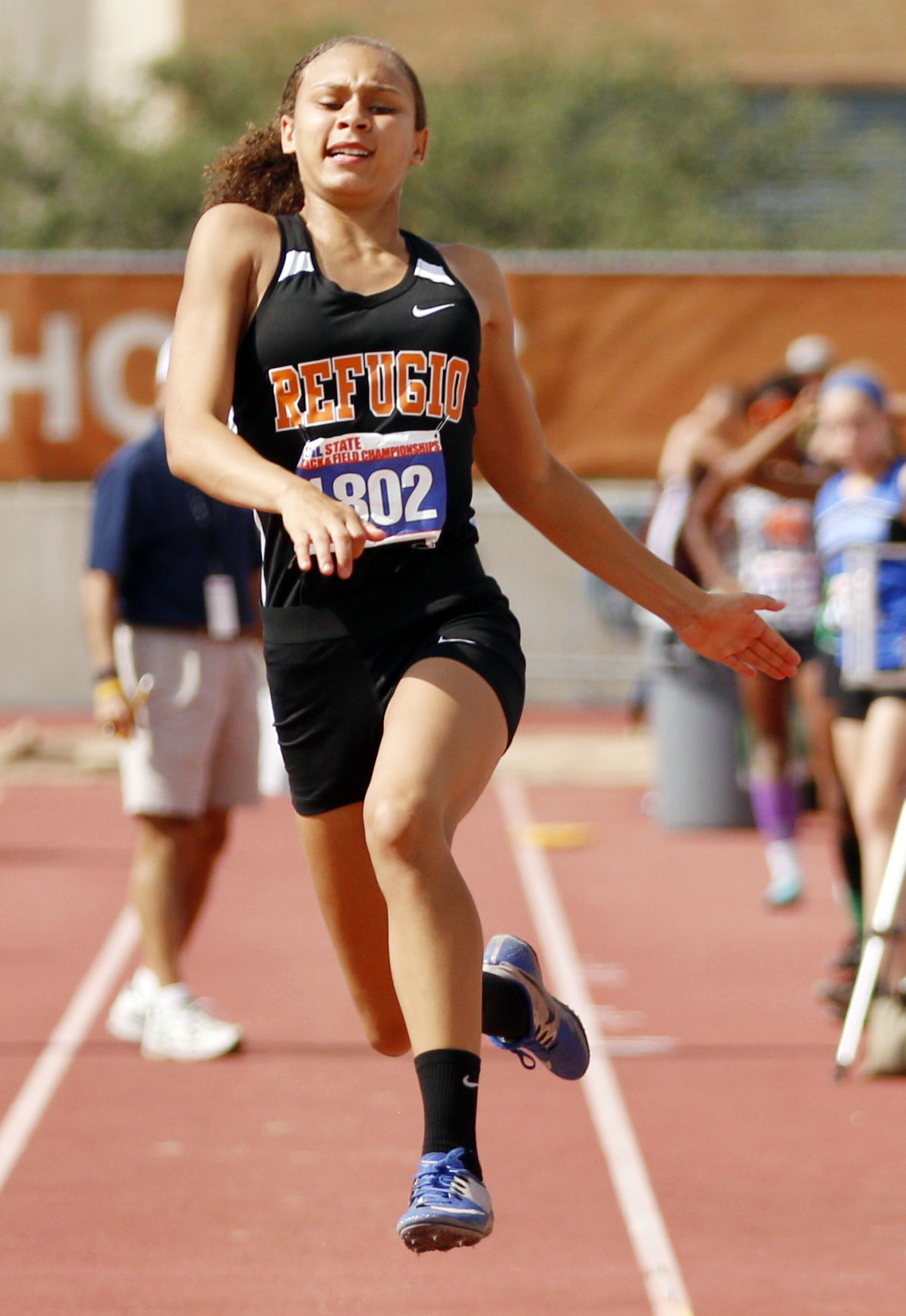 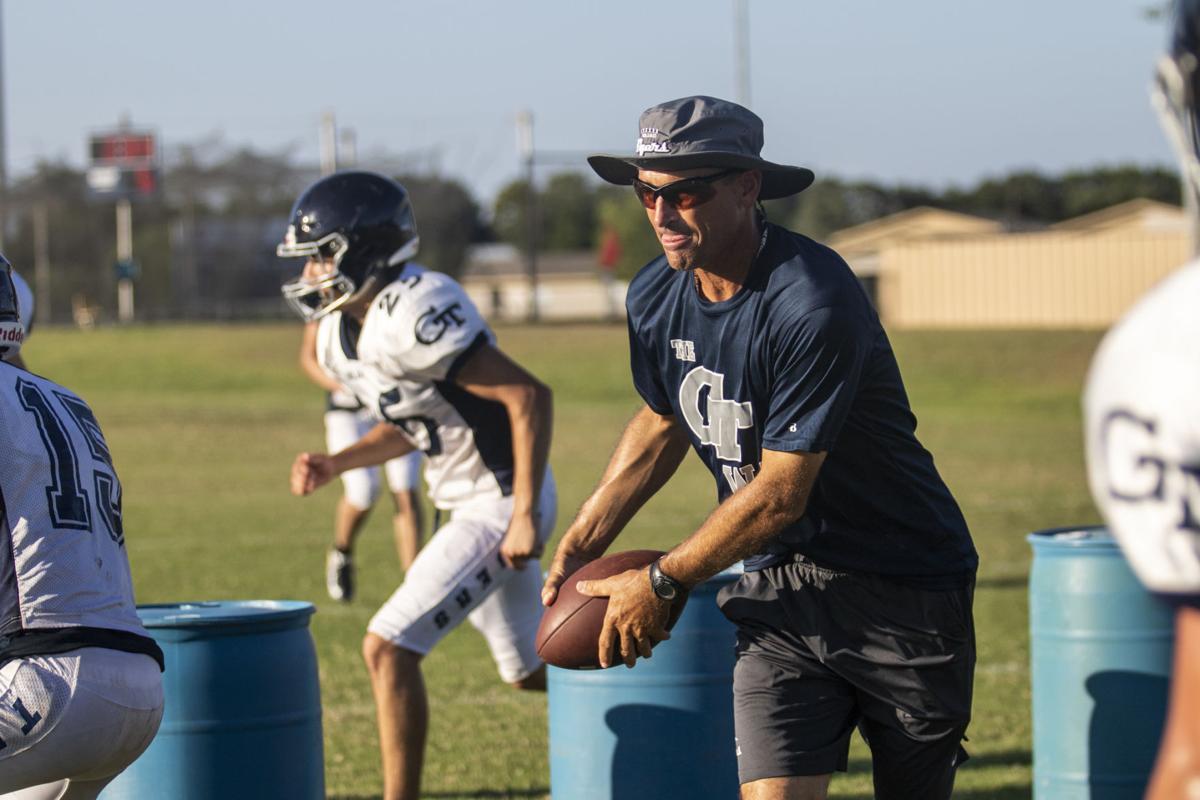 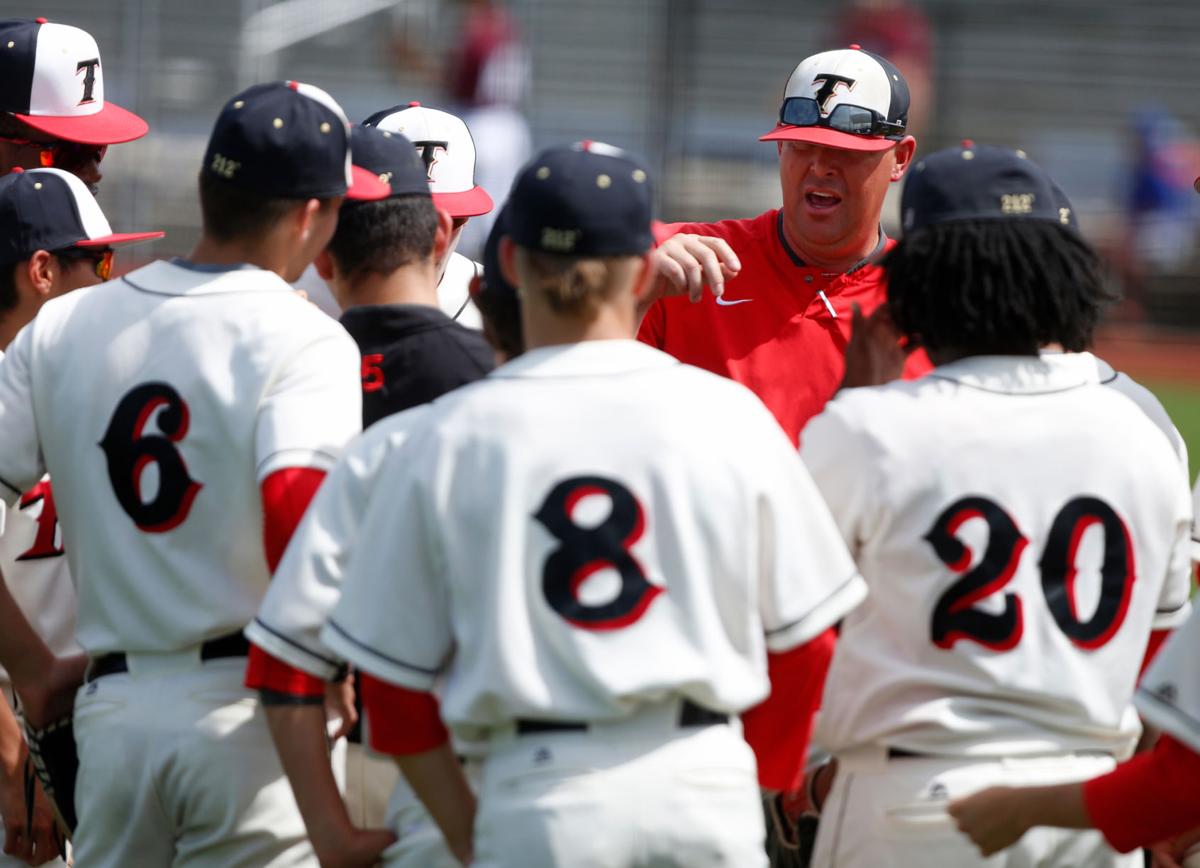 Wes Kolle, Victoria East’s head baseball coach, talks to his players during a huddle at the game against Sinton during the first day of the VISD Tournament at Riverside Stadium. The UIL released a statement Friday announcing modifications in its plans for the resumption of activities.

Refugio head coach Jason Herring talks to the Bobcats after winning the Class 2A, Division I semifinal against San Augustine at the Berry Center.

Cuero running back Tycen Williams runs down field during a District 13-4A, Division II game against Eastside Memorial at Gobbler Stadium.

Wes Kolle, Victoria East’s head baseball coach, talks to his players during a huddle at the game against Sinton during the first day of the VISD Tournament at Riverside Stadium. The UIL released a statement Friday announcing modifications in its plans for the resumption of activities.

Shiner’s Daniel Boedeker coaches football and baseball in addition to his duties as athletic director.

Boedeker has directed a number of his athletes in summer strength and conditioning drills, and some are playing on baseball or softball travel teams.

Boedeker understands the upcoming seasons are very much in limbo as the COVID-19 pandemic lingers.

Boedeker expects the UIL to do its best to come up with a plan to have athletics resume in the upcoming school year.

Boedeker believes the UIL is likely waiting on the Texas Education Agency’s mandate for schools before making any decisions.

But he has heard that some coaches have asked the UIL and TAPPS to consider switching seasons for fall and spring sports.

If that were to occur, football would be played in the spring, and sports such as track and field, baseball and softball would be held in the fall.

“I think there’s good and bad to the whole deal,” Boedeker said. “The good being baseball and those things are non-contact and are going on right now throughout the summer. Football is more of a contact sport so it allows you a little more time, but at the same time for smaller schools like us it would be very difficult kind of going from baseball in the fall, to then basketball and then football.

“We have kids who do all three and with the acclamation periods we’re required to do in football,” he continued, “and your basketball players in the playoffs may miss a few games and wouldn’t be able to practice, so I don’t know how that would work.”

The idea of flipping seasons is obviously weighted toward football, which produces the lion’s share of revenue.

Most spring sports coaches are not exactly enamored with the idea.

“I don’t think that would work,” said Goliad girls track and field coach Stacy Zamzow. “Track’s a spring sport and not to run in the cold. That’s why we have big track meets in May. The state meet would have to be in December and that’s not made for track, that’s football season.”

“If we’re 100 percent going to get to play it, then yes,” added Victoria East baseball coach Wes Kolle. “But I don’t want flip the season and we’re not back in school and we’re not a full go and then we’re waiting until spring and they go with football and we’re looking at possibly two seasons down the drain.”

Another possibility is the UIL delaying the start of athletics in the hope the number of people contracting the virus decreases.

“I see that being a really good possibility if things don’t get better in the next few weeks,” Boedeker said. “There are a lot of unanswered questions out there and we’re all waiting to see what would be the best for the kids.”

The UIL has already taken steps for the possibility of games being played with no fans in the stands, by proposing to allow live broadcasts of Friday night games for the 2020 season.

The UIL would most likely make other rule changes if the football season is delayed, including the five-day no practice rule for the holiday break.

“You would have to allow some things you haven’t been able to do in the past,” Boedeker said, “It would be kind of like the things they did this summer – they gave us more time with the skills development that’s just for one year, but it would have to be something they look at.”

“Baseball, softball and track are a lot easier to social distance than football and basketball,” he said. “I just want us to have all of our seasons. If there’s any way possible we can play all of our seasons, even if they’re all shortened, that’s what I want to do.”

The UIL shut down athletics in March until allowing summer strength and conditioning to begin June 8.

But some programs have had to suspend strength and conditioning after players, coaches or other school employees tested positive for the virus.

“We have to kind of control this thing so there’s not such an overload on the hospitals when people do get this, especially the elderly,” Zamzow said. “With everything opening up, we kind of knew this was going to happen. I just think sooner or later, we’re going to have to get back to some kind of normalcy understanding that the virus isn’t going anywhere.”

Athletics’ place in the current equation remains very much an unknown.

“I just hope we can somehow have a little sense of normalcy,” Herring said. “If it’s your senior year and it’s canceled, you’re done. I know as coaches and community members we want it bad. But at least we get to come back. You know seniors don’t ever get to run that last year of track or play that last year of baseball. I feel so sorry for all those kids.”