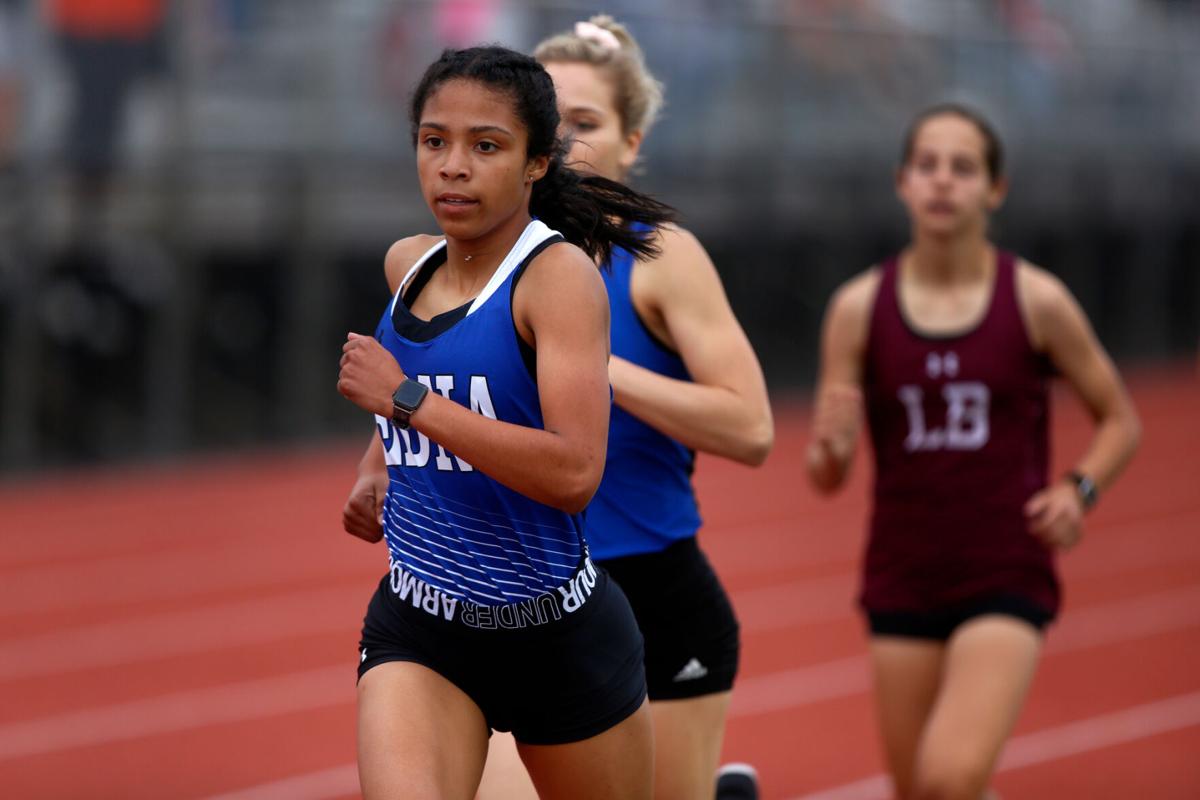 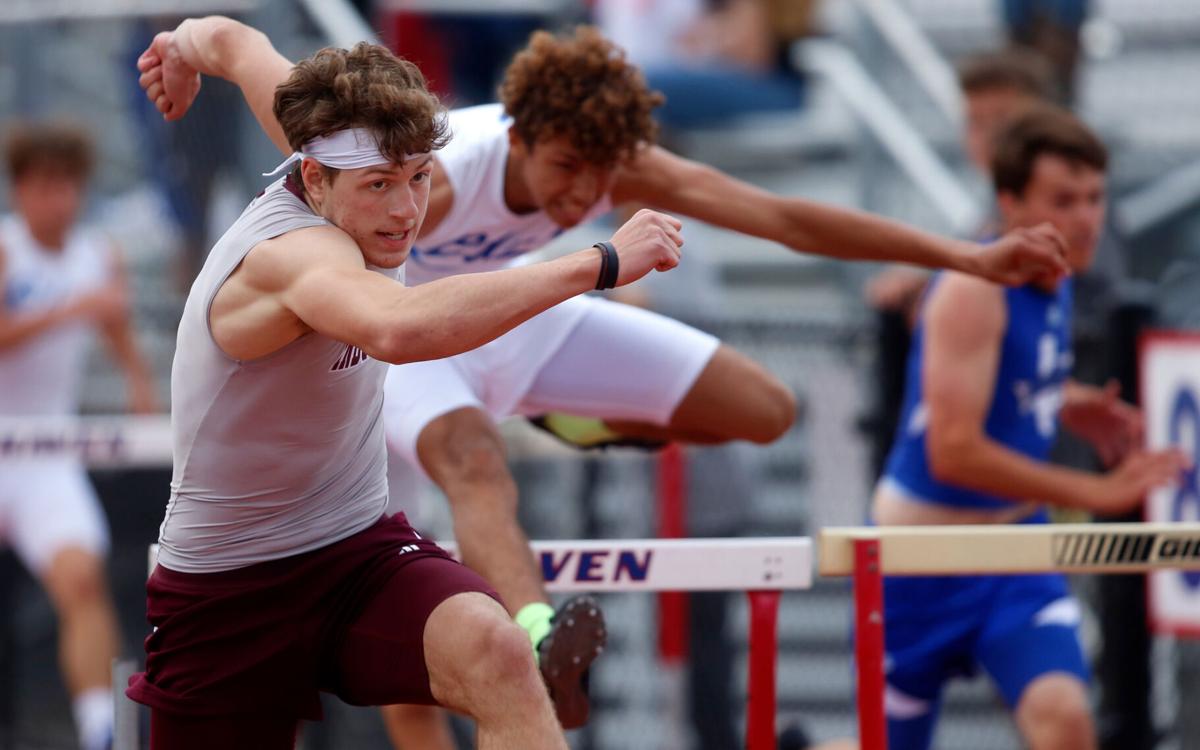 Industrial’s Jackson Fluitt speeds toward the finish during Wednesday’s District 28-3A Track and Field Meet at Tidehaven High School in Elmaton. Fluitt finished second in the 110-meter hurdles. 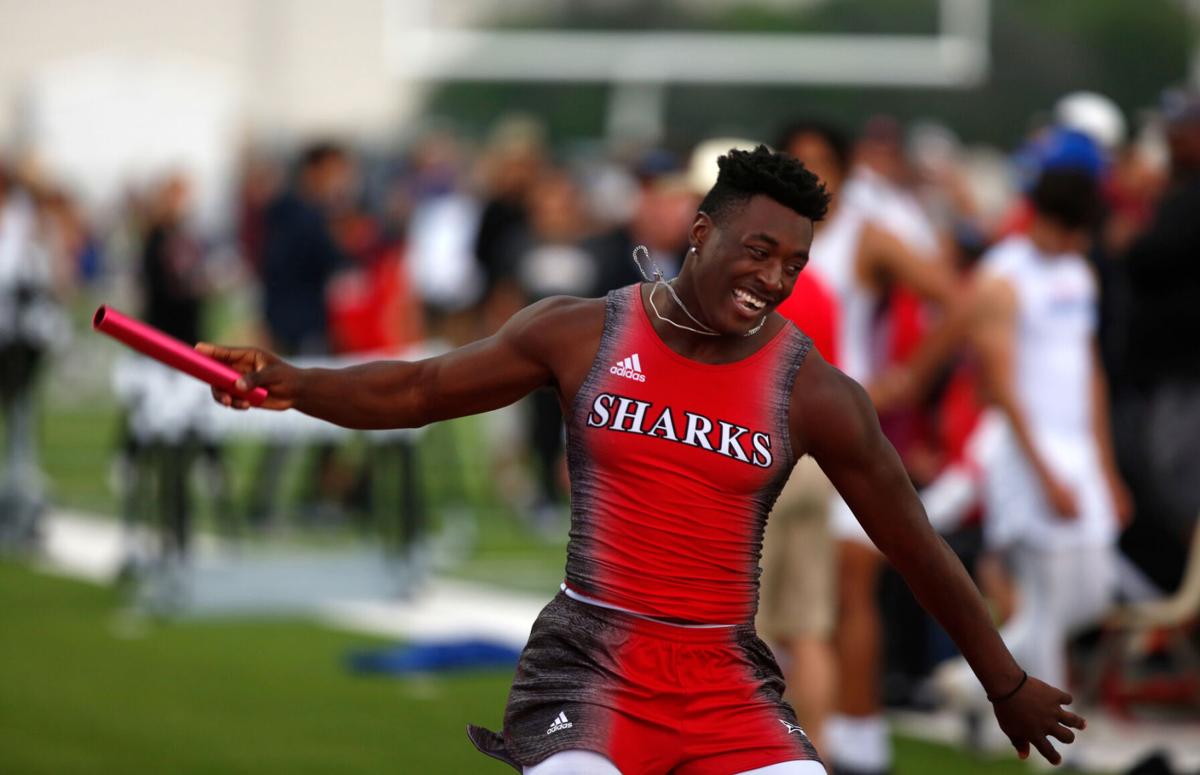 Industrial’s Jackson Fluitt speeds toward the finish during Wednesday’s District 28-3A Track and Field Meet at Tidehaven High School in Elmaton. Fluitt finished second in the 110-meter hurdles.

EL MATON — Kila Rodas has been a member of the Edna track and field team for three seasons and knows all about the streak.

The Cowgirls came into this week’s District 28-3A meet looking to win their sixth straight district championship.

The streak began in 2015 and was interrupted last year by the COVID-19 pandemic.

“We had to keep the streak going,” said Rodas, a junior. “We had to get six.”

Rodas did her part by winning the 200- and 400-meter dashes, and the 800-meter run to help Edna claim the title with 159 points Wednesday at Delvin Taska Stadium.

Yoakum was second with 144.5 points, and Industrial was third with 140 points.

“The streak was really important,” said Edna coach Ashley Myers. “When the streak started, I was a senior in high school, so to get it as a first-year head coach that legacy in Edna it was awesome to continue.”

Edna’s Kila Rodas @KilaRodas won the 200, 400 and 800 at the District 28-3A meet and helped the Cowgirls win their sixth consecutive district title. pic.twitter.com/ha43YU6kW9

Rodas contributed 30 points with the rare triple that has become her staple.

“The last meet I ran in the 4 by 100 relay instead of the 800,” she said. “I knew I was running this for district, but not running it in that amount of time made it hard today. But I’ve been doing it all season now, and that makes it pretty much the routine.”

Edna’s Shelby Keith wins the 100-meter dash at the District 28-3A meet. pic.twitter.com/wnPhwr95Gy

Myers was pleased with performance of her entire team.

“I couldn’t ask for anything better,” she said. “I told them to just relax and focus on themselves. They came out and executed exactly as we planned.”

Industrial has the numbers

Industrial used its overall depth to win the boys team title with 157 points.

Palacios was second with 124 points, and Yoakum was third with 109.

Industrial’s Marvin Campbell wins the 110-meter hurdles at the District 28-3A meet. pic.twitter.com/5x3n91Tfi1

“We’ve got a lot of depth particularly for a 3A high school,” said Industrial coach Bill McCabe. “We have three kids in every event.”

The Cobras did well in the field events, relays, middle distance and distance events.

Industrial’s Kaleb Figirova and the Cobras won the District 28-3A track and field championship. pic.twitter.com/ee9RytNHpe

Industrial added a district title to the ones it won in football and basketball.

“We always wanted to win district in football, baseball, basketball and track,” Figirova said. “We just wanted to do the whole thing – tennis, golf, all of it. It’s been on our bucket list since the beginning of the year.”

New to the game

Yoakum’s Cavan Smith had not run varsity track before this season.

But he’s adapted quickly, as he showed by winning the 100-meter dash and running a leg on the winning 400 relay.

Yoakum’s Cavan Smith ⁦@cavansmith10⁩ won the 100-meter dash in a time of 10.93 seconds at the District 28-3A meet. pic.twitter.com/t8ZcjIfPoT

The race was so close it took the judges some time to figure out the places.

“I mean Jonathon (Brooks, who finished fifth) was running with me so I knew I had to go fast,” Smith said. “I actually got a good start. I knew I had won.”