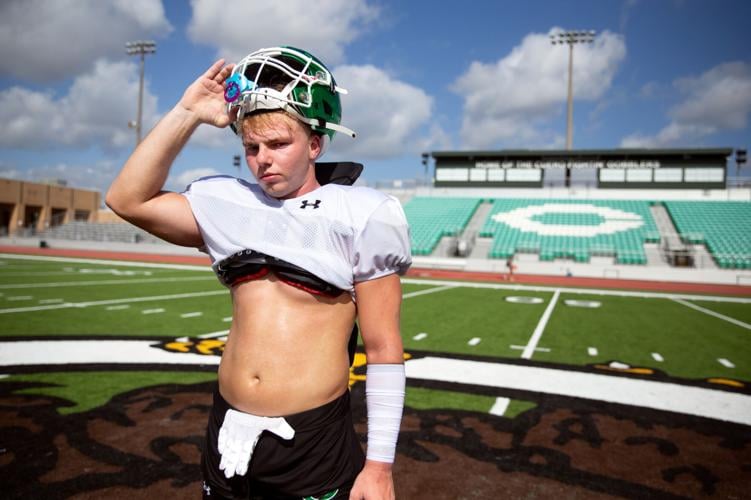 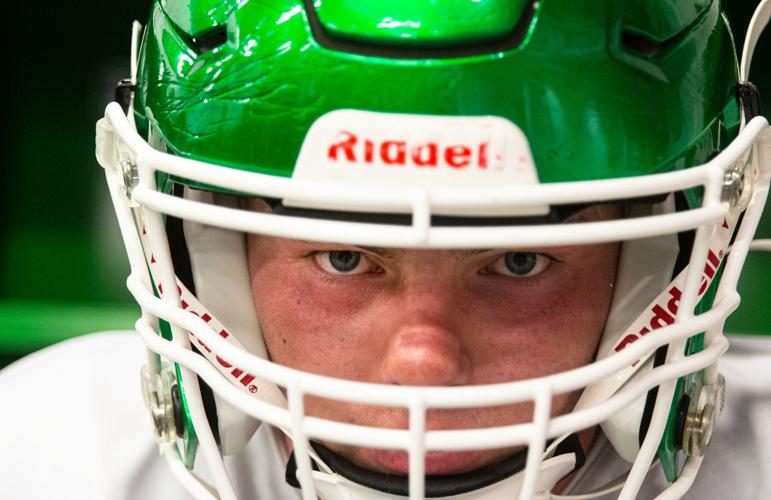 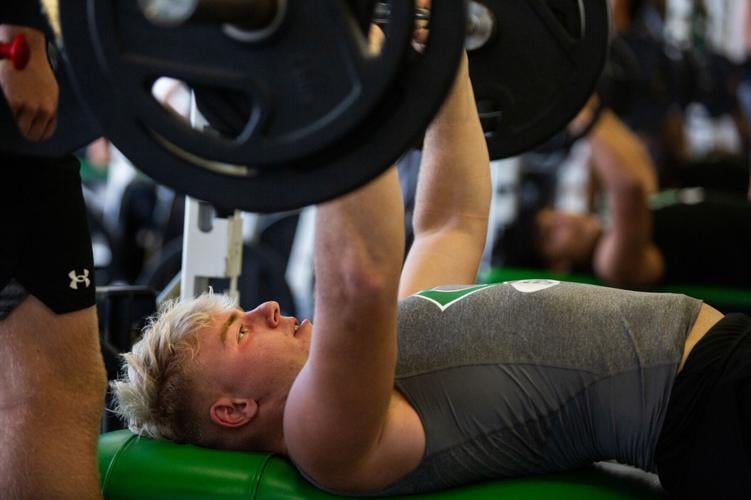 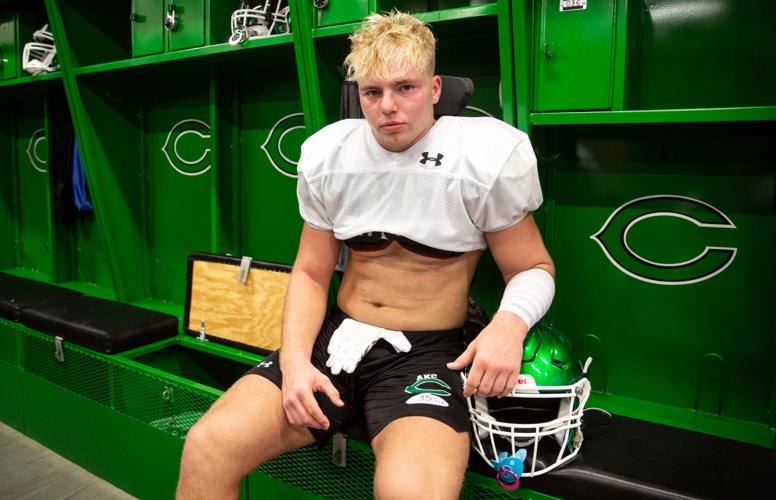 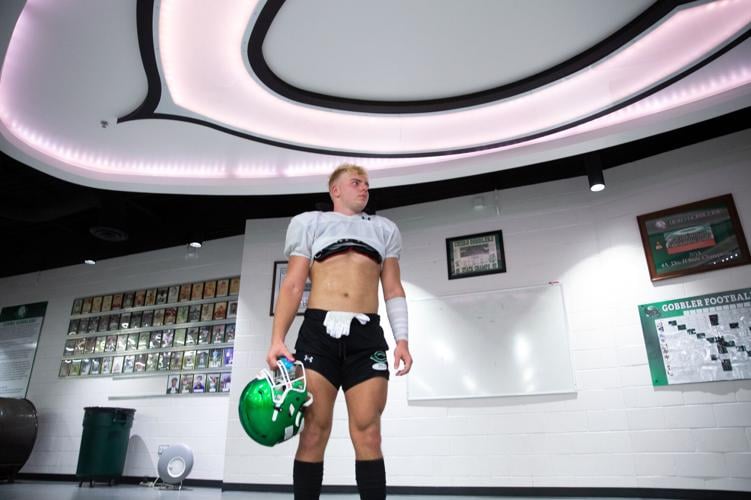 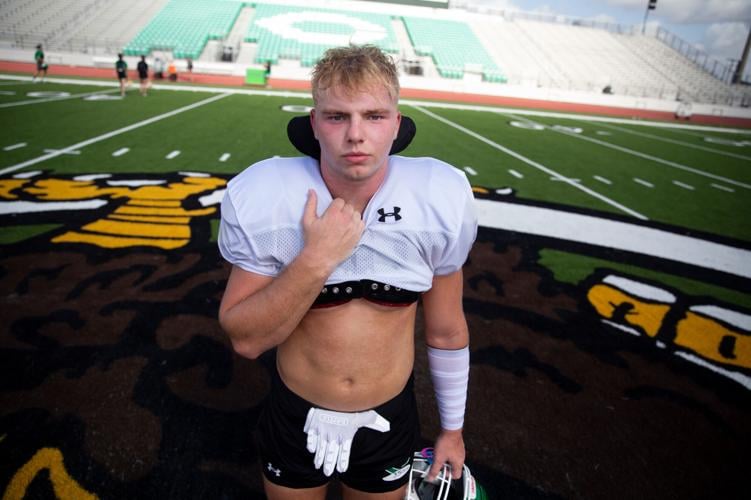 CUERO — Sean Burks has changed his jersey number from 20 to 4 this season.

But that’s not the only difference Cuero opponents will notice about Burks.

The 6-foot Burks will play his senior season at 205 pounds after earning first-team all-state and all-area honors at linebacker at 180 pounds last season.

“You’ve got to eat a lot,” Burks joked when asked how he put on the weight.

The truth is Burks spent much of the summer working out on his own and at strength and conditioning drills, in the weight room and attending college camps.

“I got a lot stronger,” he said, “I’m still fast. I’m faster than I was. We’ve been working hard at conditioning.”

Burks led a Cuero defense that limited opponents to less than two touchdowns a game during the regular season, and spurred a drive to the Class 4A, Division II state semifinals.

“Sean’s a high-motor kid,” said first-year Cuero coach Jerod Fikac. “He’s got a nose for the football all the time. He’s going to be where he’s supposed to be all the time. He’s one of those guys you know when you put him out there you’re going to get everything you got out of him. He leads by his work ethic. He has the respect of his teammates. They see the work that he puts in and that helps him continue to be a great player.”

Fikac began installing his offensive system when he moved to Cuero from Georgetown East View in March.

But Fikac retained defensive coordinator Michael Blank so the Gobblers, who return eight defensive starters, aren’t likely to make many changes on that side of the ball.

“The thing that Sean is really good at is he’s really technical,” Blank said. “He’s a guy who is in the film room all the time with me. The technical play got him where he’s at right now. He’s always been really good. He’s kind of had that ‘it’ factor where he can get to the ball and tackles well.”

Burks led the Gobblers with 275 tackles last season, including 83 solo tackles. He also forced four fumbles and had six sacks.

“It’s a great defense,” Burks said. “I’m in love with it. It’s great. Our outside linebackers just turn everything into the inside and we make plays and tackles.”

Burks moved from outside to inside linebacker as a sophomore, and his familiarity with the defense has been a major factor in his improvement.

Burks also understands the expectations of playing at Cuero. The Gobblers lost in the bi-district round his sophomore year before making their semifinal run last season.

“It’s been a privilege to be able to wear the Cuero Gobblers stuff and the logos,” he said. “Being here with a good team — obviously, we’ve had coaching changes — but every coach who has come in here has been great.”

Cuero enters the season ranked No. 6 in the state poll, but will face a challenge from a non-district schedule that includes El Campo, Navarro, Yoakum, Calallen and Beeville, who all made the playoffs last season.

“We are in the same defense,” Burks said. “We have a lot of people back. We have a lot more people joining and it’s going to be great.”

Burks earned offers from Arkansas-Monticello, Hendrix College and Southwestern Assemblies of God over the summer and more are likely to come.

But Burks’ biggest priority is making his final season at Cuero as memorable as possible.

“It’s really about the team,” he said. “I accomplished a lot last year. This year, it’s just whatever we need to do to win is what we’re going to do.”

Podcast: The Grid — E1: Football is back!

The AdvoSports team of Mike Forman, Jeremiah Sosa and Sam Fowler preview #txhsfb in Victoria and beyond, and look at teams primed to make deep…