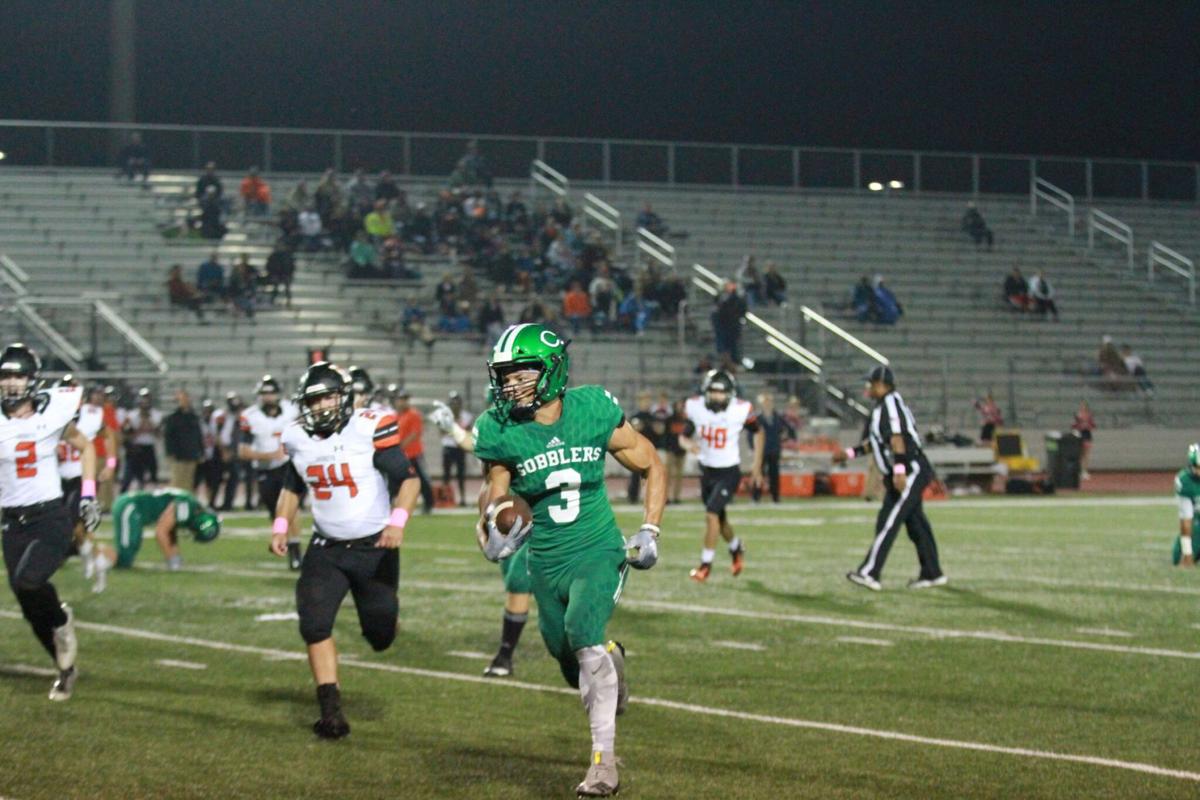 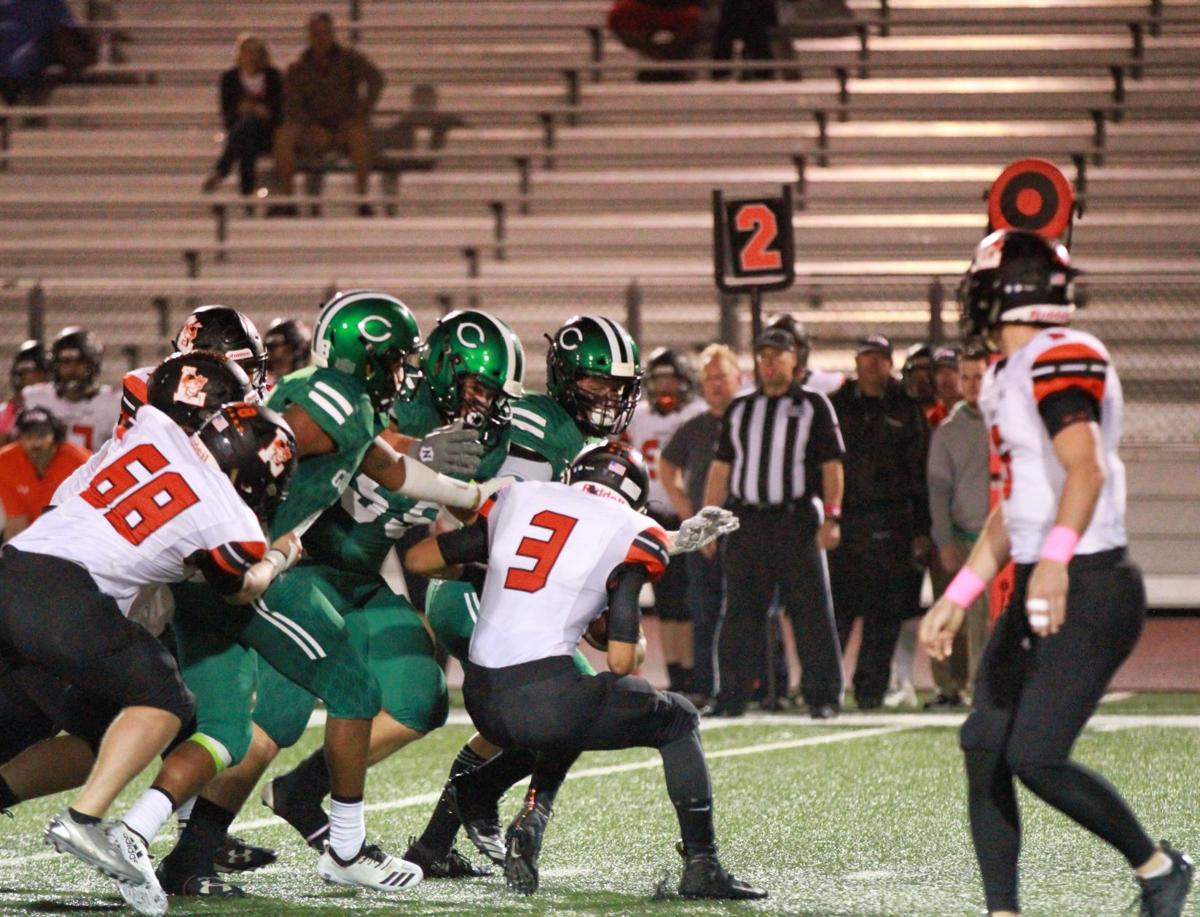 Cuero's defense makes a stop against Llano on Friday night at Gobbler Stadium. 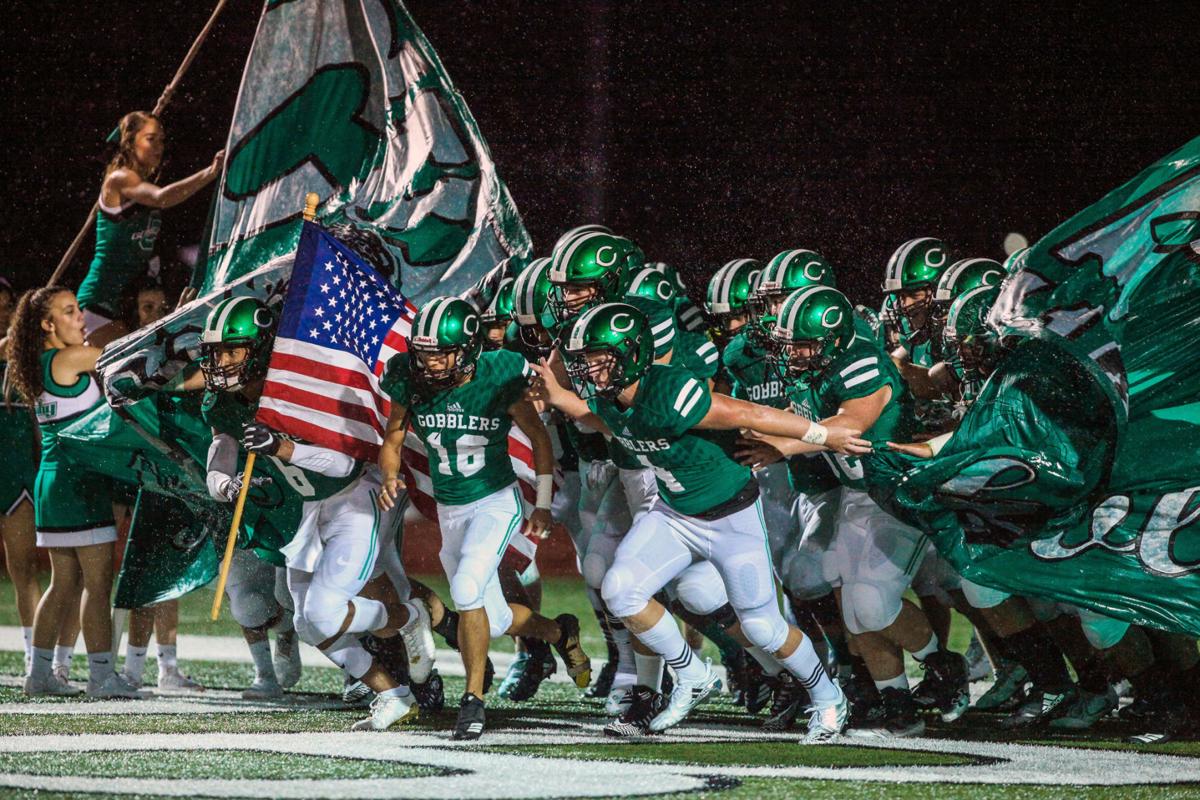 Cuero’s Trey Moore leads the Gobblers onto the field at Gobbler Stadium.

Cuero's defense makes a stop against Llano on Friday night at Gobbler Stadium.

Cuero’s Trey Moore leads the Gobblers onto the field at Gobbler Stadium.

CUERO – Jordan Whittington missed the first five games of his senior season with an injury.

But Whittington hasn’t needed long to make his presence felt.

Whittington accounted for 217 all-purpose yards and scored three touchdowns – all in the first half – in his second game back to lead Cuero to a 55-16 District 13-4A, Division II win over Llano on Friday night at Gobbler Stadium.

“I feel like I’m back into it,” Whittington said. “I still feel like I’m not 100 percent back where I should be, just skill-wise. I’m not hurting anymore. It’s just getting in condition, and I’m not cutting as much.”

“He’s a really dynamic player,” Cuero coach Travis Reeve said of Whittington. “He made some huge plays in really all phases of the game tonight. He had a great game.”

Reeve was pleased with No. 5 Cuero’s overall performance as it improved to 6-1 overall and 2-0 in district.

“I thought the way we played tonight reflected how we practiced this week,” he said. “We were at a new level tonight. I’m really proud of our kids and how they came out and took care of business.”

Keiran Grant scored on runs of 3 and 27 yards, Chance Albrecht added touchdown runs of 10 and 2 yards and Barta threw a 15-yard touchdown pass to Devin Whittington, who had four receptions for 52 yards.

“The team – I felt like tonight we clicked,” Jordan Whittington said. “We can only go up from here. This was a great week of practice. It was the best Wednesday we’ve had since I’ve been here. The energy we’ve got – it’s a new little defensive run-out now.”

“It really didn’t start today,” said defensive end Justin Ficklen. “It actually started this week Monday. We came out here and had the best week of practice we’ve had all year. Honestly, it’s one of the best practices I’ve been a part of all four years. We came out here and had an edge about us – the cold weather, I think, brought something out in us. We showed up and played like that all week.”

The Yellow Jackets had 40 yards of offense through three quarters and settled for a 22-yard field goal by Diego Miguel after Kaleb Dodson intercepted a pass and returned it to the Cuero 3-yard line.

Cuero on the field at Gobbler Stadium. pic.twitter.com/5sGdajPsLk

Jordan Whittington has played on varsity since his freshman year but believes this year’s team has the ability to surpass what the others have accomplished.

“We worry about the team we play that week,” he said. “But we’re not playing to beat (Austin) Eastside Memorial or beat Wimberley. We’re playing to solidify our thing so people will know this is what we’ve got coming. If we keep practicing and preparing how we’re doing, I think we’ve got it.”