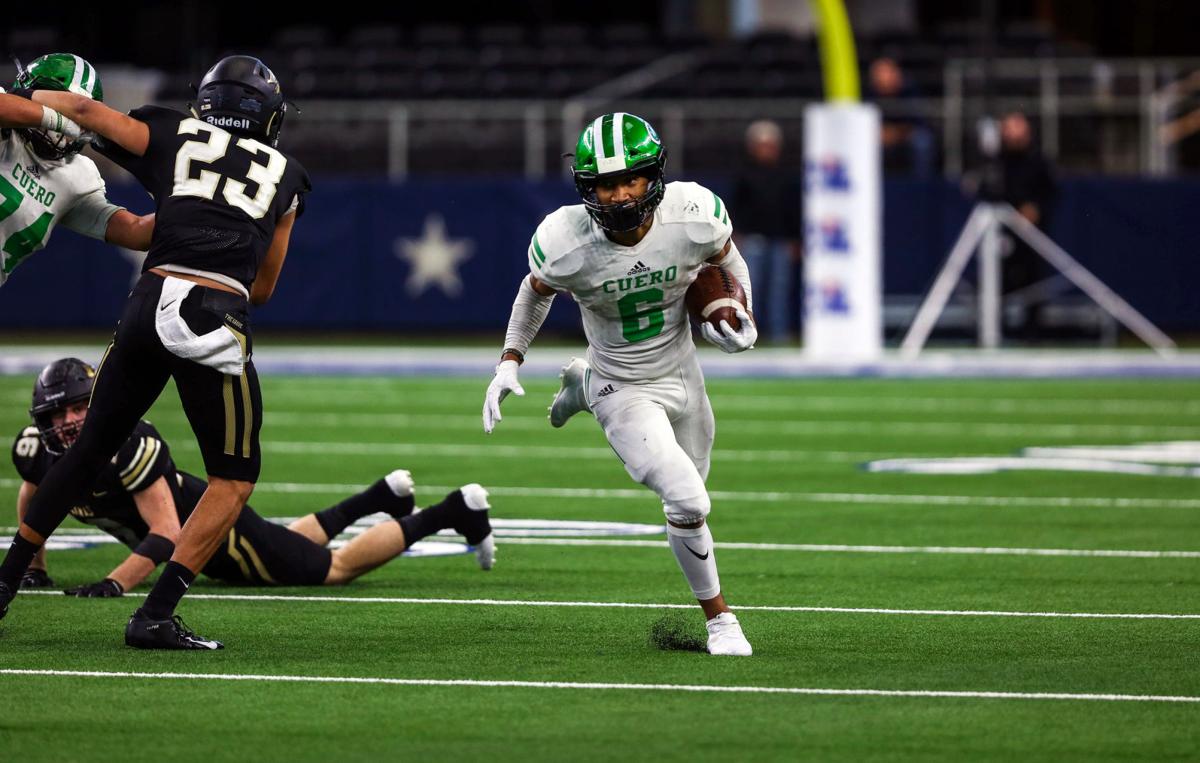 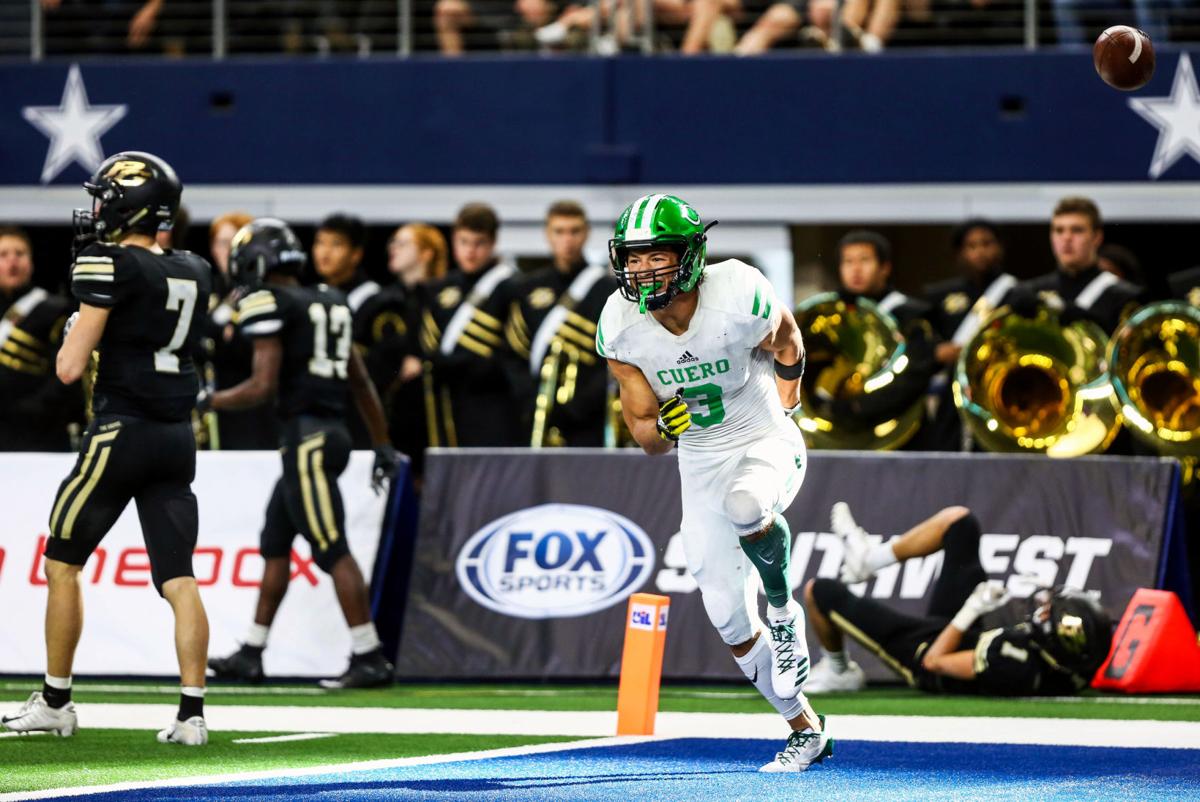 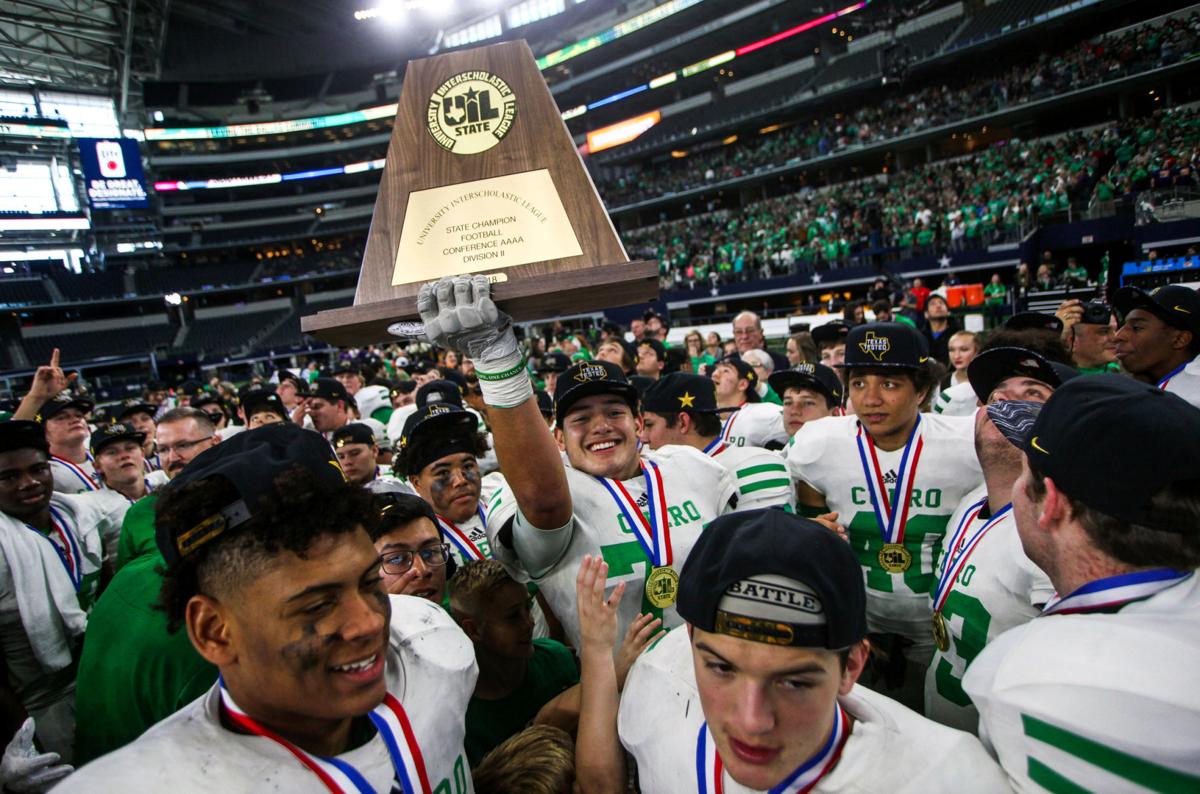 ARLINGTON – When Cuero senior Keiran Grant looked up and saw his teammates celebrating their Class 4A, Division II state championship, he had to take a moment to gather his thoughts.

The only problem was he couldn’t.

“I was speechless,” Grant said. “To be able to win this with all of my brothers after everything we’ve been through was special. We wanted to win for Trey’s (Moore) mom and the rest of our community.”

Grant and the rest of Cuero’s senior class couldn’t have scripted a better finish to their high school careers.

A career filled with injuries, playoff heartbreak and other mishaps had finally been put to rest.

Twenty-two seniors were finally crowned state champions after the Gobblers captured a 40-28 state title win over Pleasant Grove on Friday at AT&T Stadium.

It was Cuero’s first state title since 1987.

“We talked about kicking the door down, and that’s what we did,” said Cuero senior Caden Jander. “We kicked a 31-year-old door down.”

The Cuero Gobblers are UIL Class 4A, Division II state champions for the first time since 1987. pic.twitter.com/04JvDkPevz

“This senior class is a great group of guys,” Grant added. “To be able to play and bond with them this season was a great opportunity. We were all ecstatic and happy for each other. It’s sad that it’s our last go-round, but we’re still going to bond and be brothers.”

Because of injuries, Grant missed two games during the regular season and was sidelined in the second half in the area round of the playoffs.

“It means a lot to me because I had to stay mentally strong,” said Grant, who had seven carries for 44 yards against the Hawks. “It’s not about getting knocked down but about getting back up. Taking all those hits and coming out of the game after being injured says a lot. Coach (Shawn) Alvarez told me I needed to be a warrior, and I believed in what he said.”

Cuero coach Travis Reeve watched Grant and Jordan Whittington develop since they were freshmen on varsity.

For Reeve, seeing his senior class finish as state champions was only fitting.

“For them to be able to go out this way is a testament to all the hard work they put in,” Reeve said. “I couldn’t be happier for them. They are going to be a senior class that is going to be remembered for a lifetime in Cuero.”

“Keiran and Jordan started as freshmen, and they have been telling me, ‘Coach, we are going to win one before we leave,’” Reeve added. “These guys have done things in an uncommon way in a lot of areas in their life. They deserve this.”

Whittington was the difference in Friday’s state final win over Pleasant Grove.

The future Texas Longhorn turned his high school swan song into a game that will be remembered for years to come.

His record-breaking night earned him the game’s most valuable player on offense and defense.

“We’re blessed as a team, and we fought to the end,” Whittington said. “We had to come out and make something happen. The seniors on this team mean everything to me. We have been playing since seventh grade, and I’m glad we were able to get it our senior year.”

Jander will celebrate the Gobblers’ state championship for weeks to come.

But winning it with his senior class is something he’ll cherish for the rest of his life.

“It’s a great feeling to do it with these guys,” Jander said. “Our group of seniors is amazing, and I couldn’t ask for a better senior class to be a part of. I’m so happy we went out like this.”

The Gobblers will have holes to fill with the departure of 22 seniors, but Whittington believes they have what it takes to make another run.

“They know what they have to do to get to state,” Whittington said. “Hopefully they can come out and do it again.”

ARLINGTON – Among a sea of green, Suzanne Banda stood up from her seat and shook a green bottle in each hand, the contents rocking about loudly.