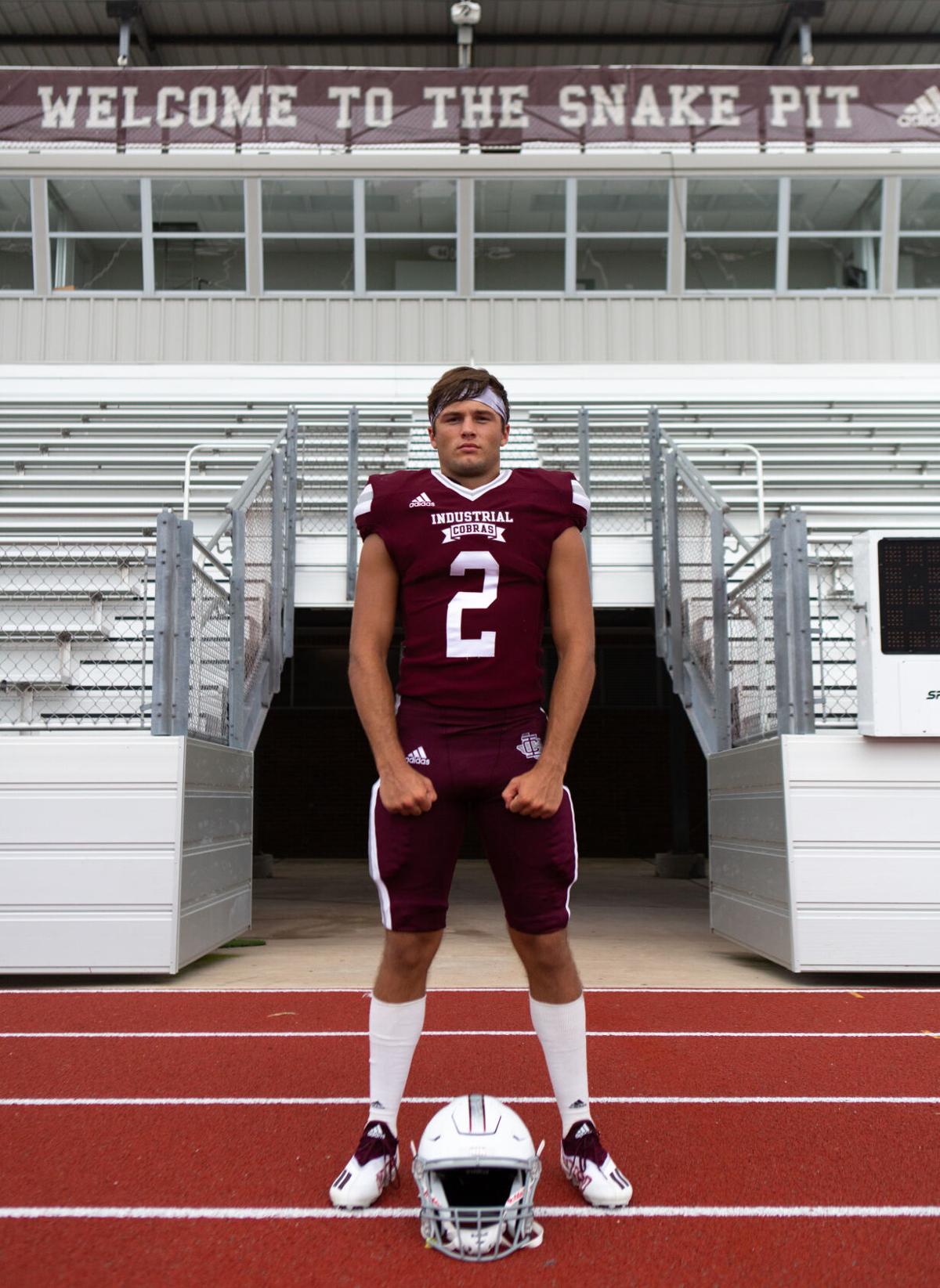 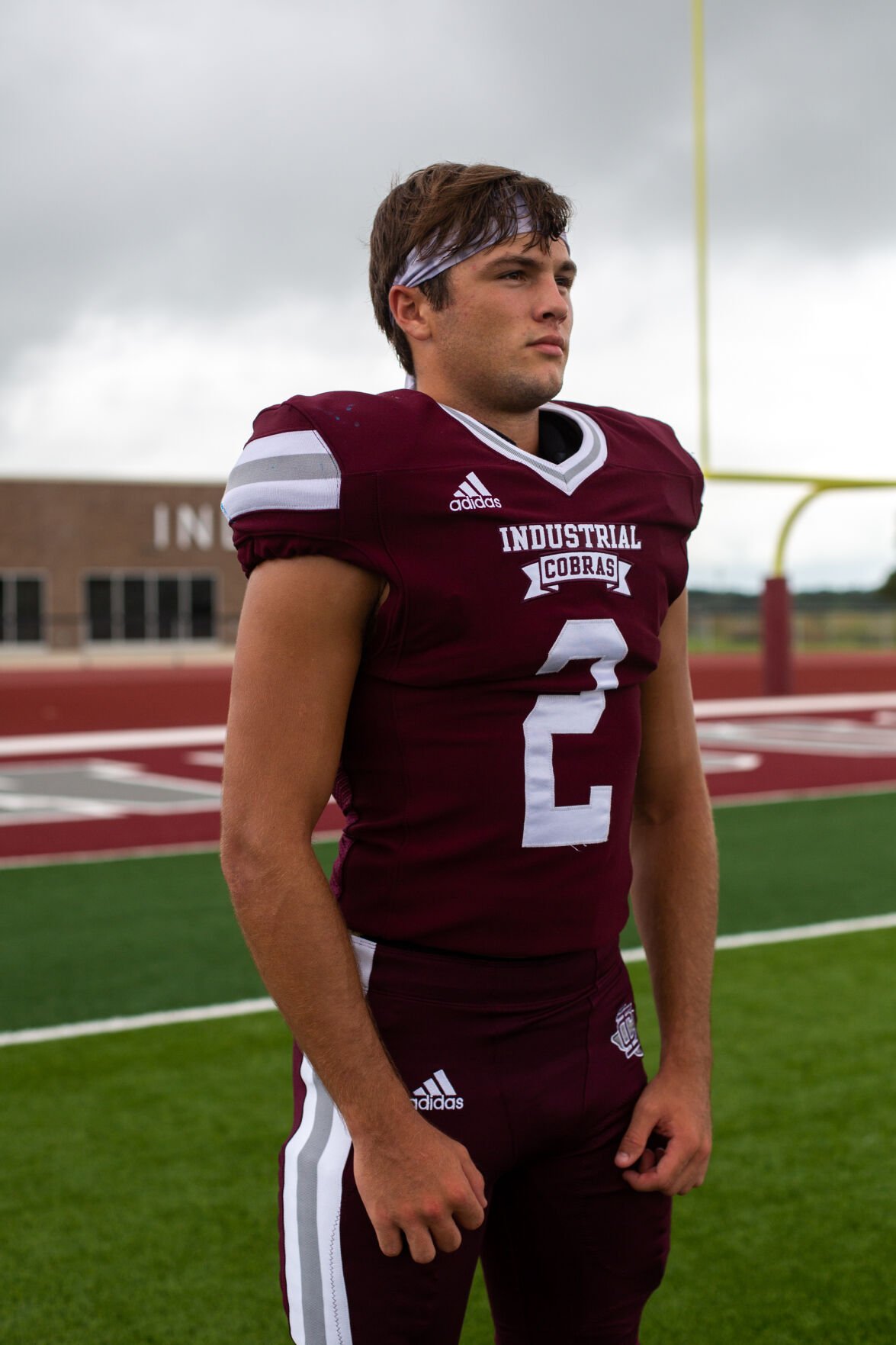 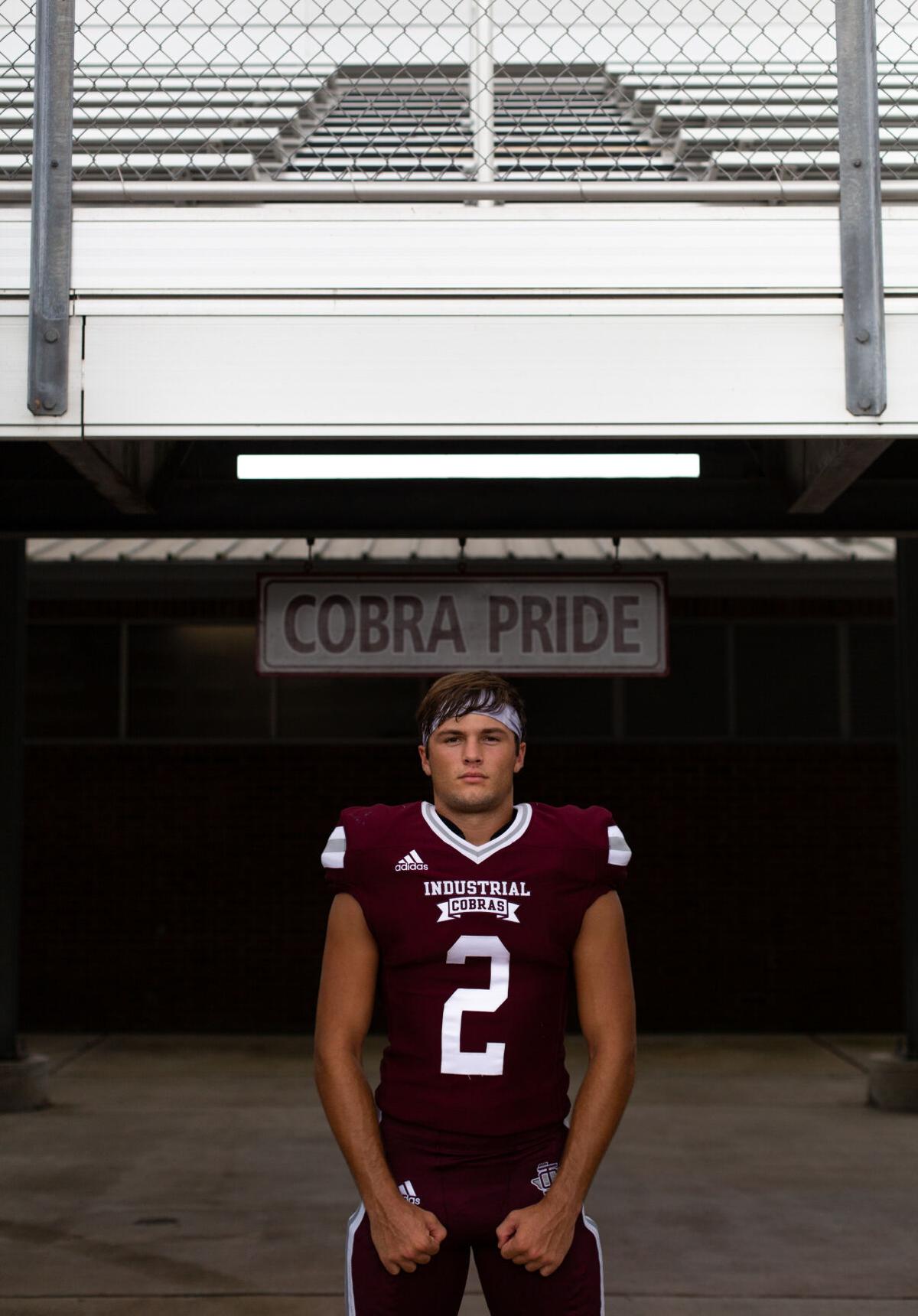 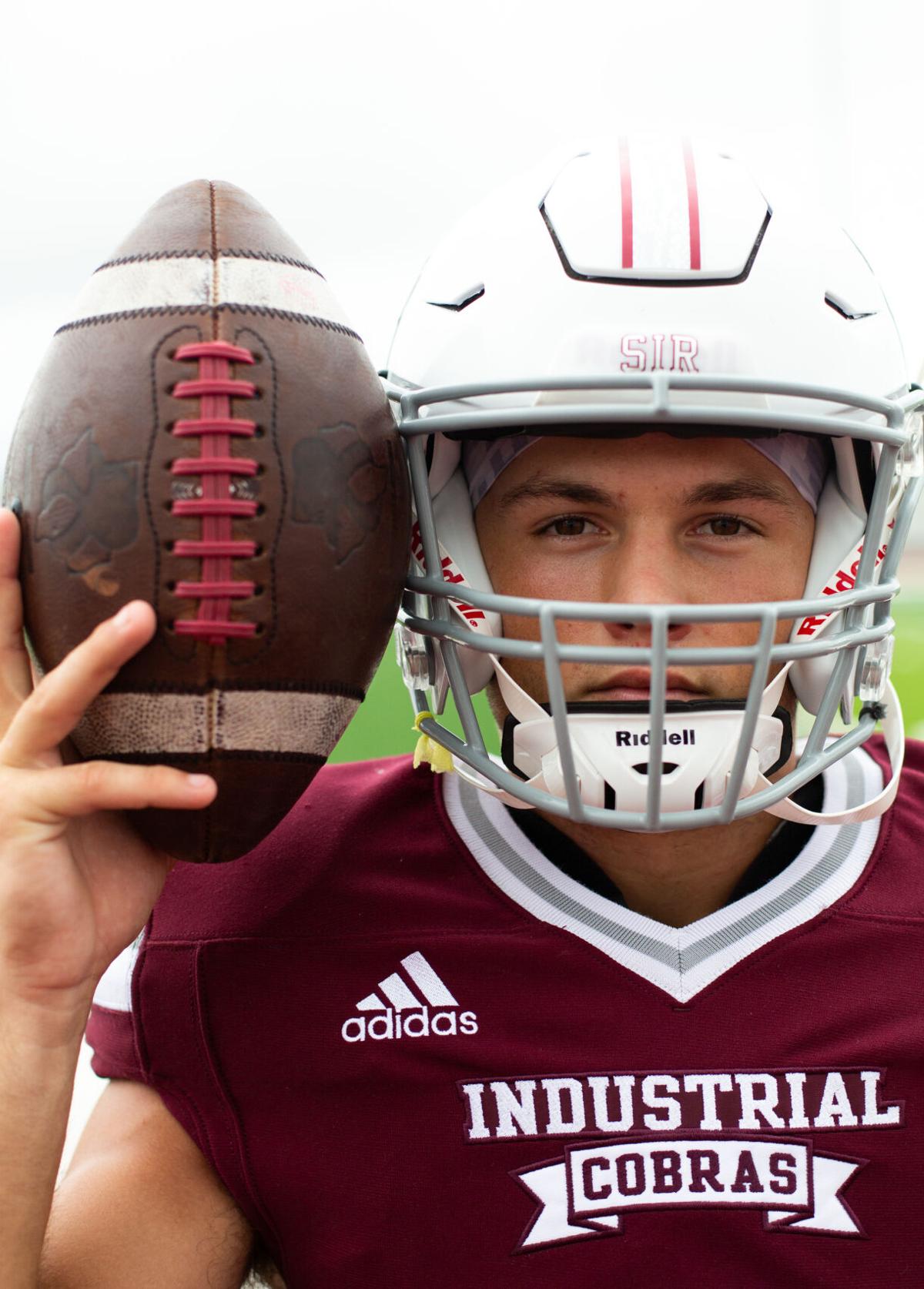 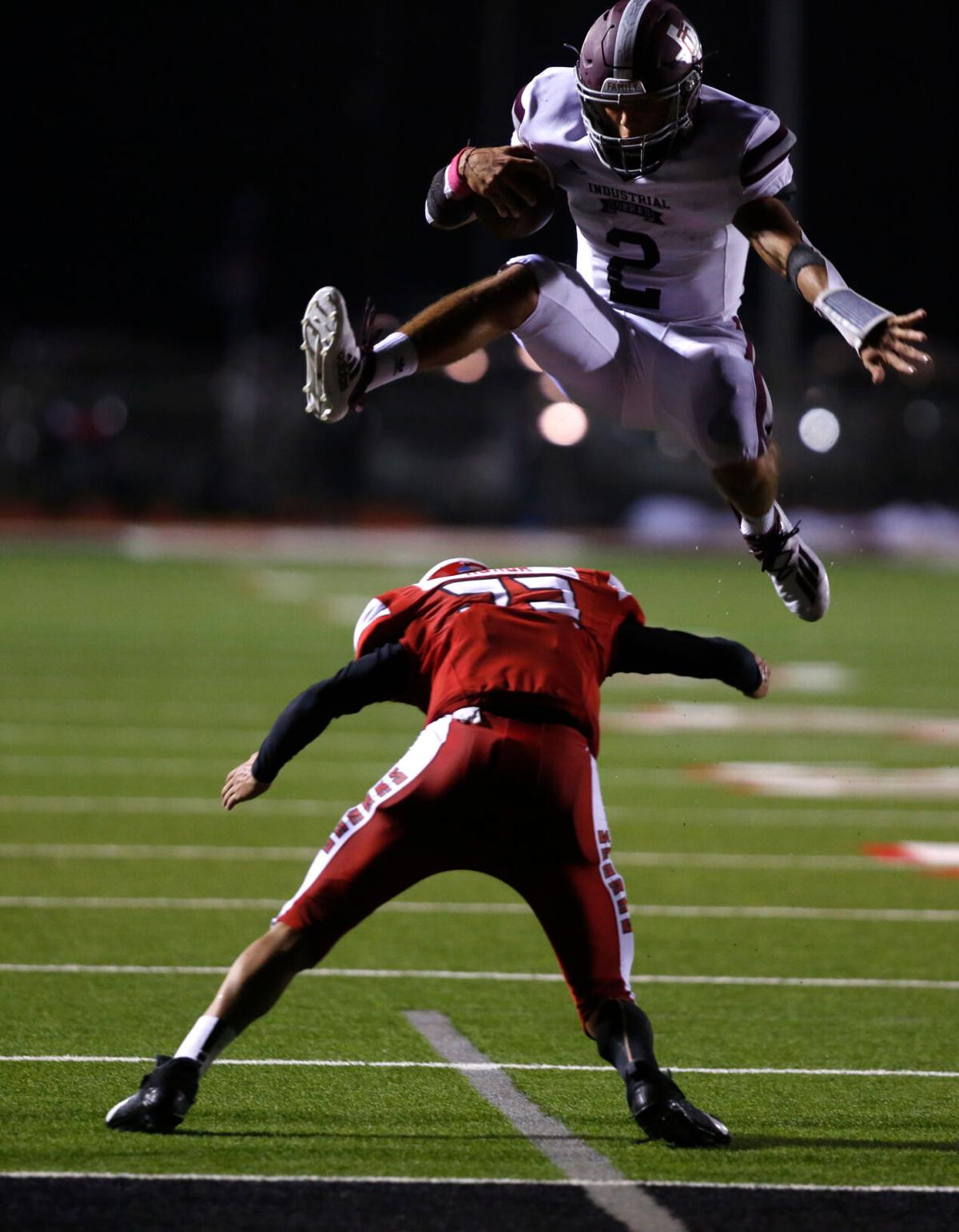 Industrial’s Matthew Davis jumps over a defender during a District 15-3A, Division I game against Palacios at Palacios. 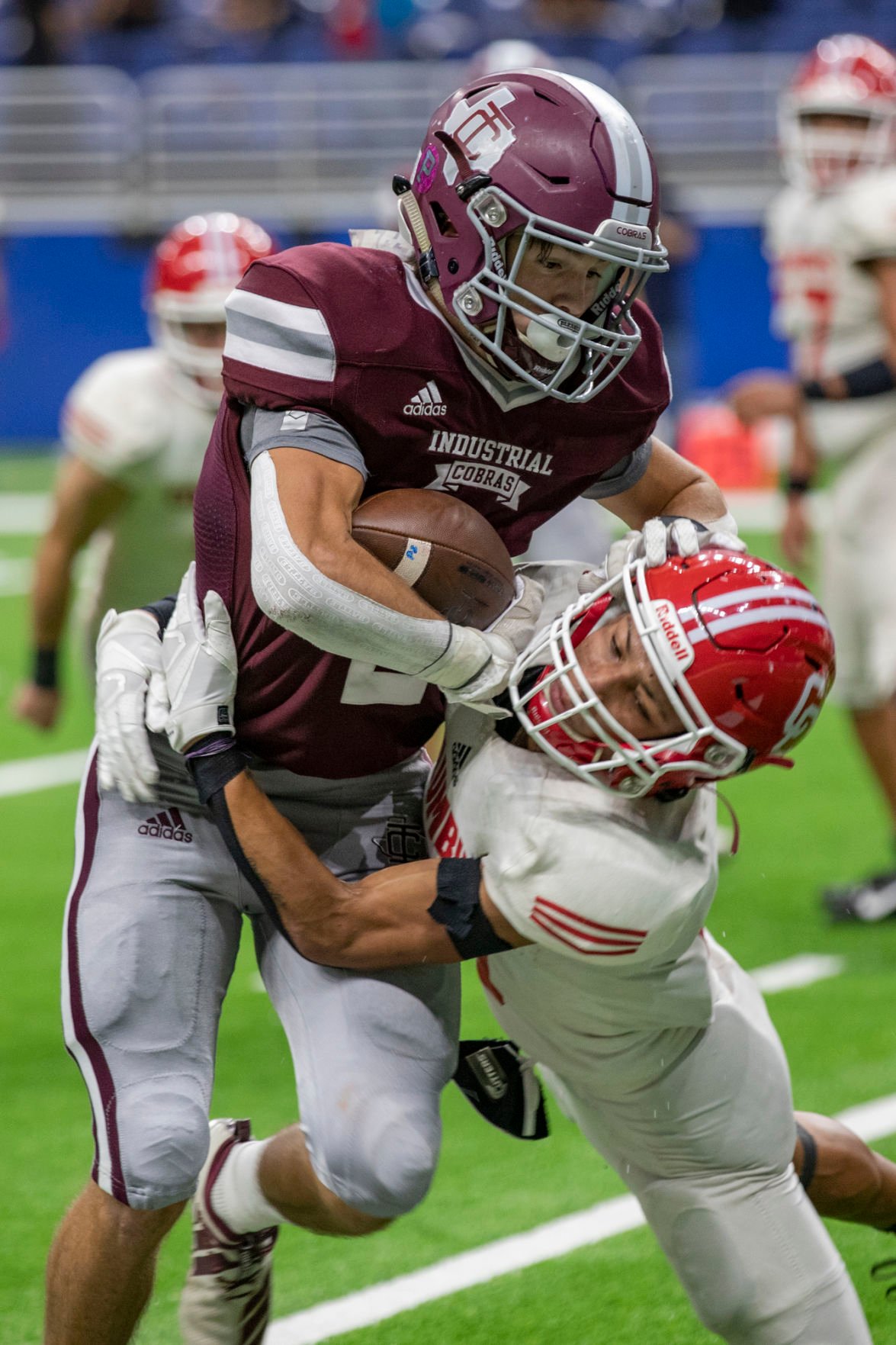 Industrial’s Matthew Davis is tackled by Columbus’ Kaycon Wilson during a Class 3A, Division I regional round at the Alamodome in San Antonio. 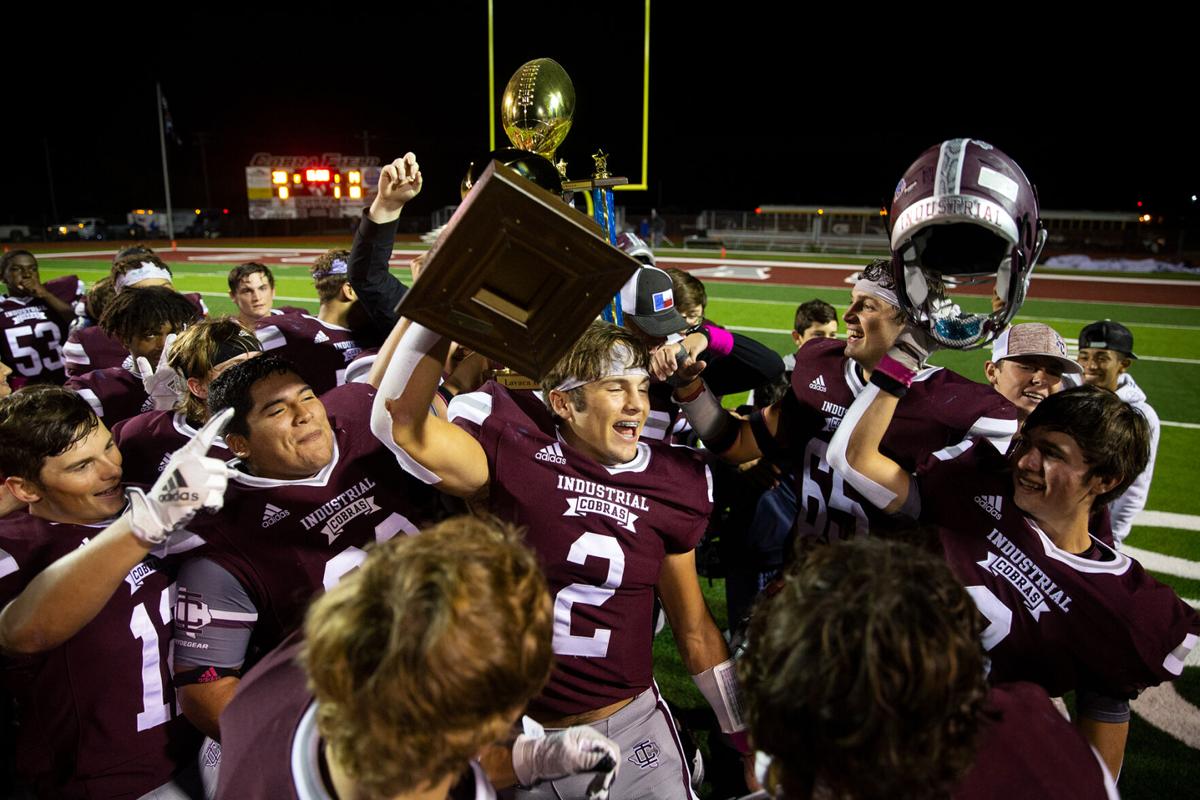 Industrial’s Matthew Davis raises up the trophy after the Cobras defeated Edna 38-14 during a District 15-3A, Division I game at Cobra Field in Vanderbilt. 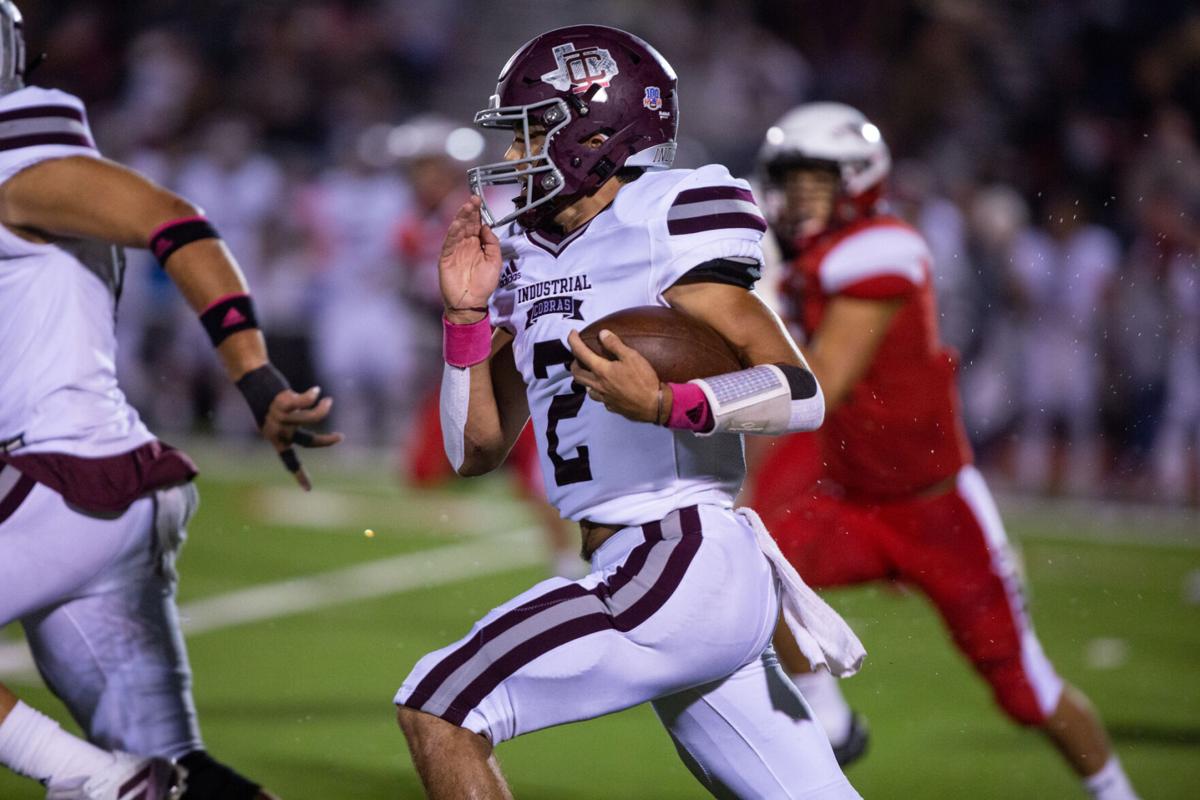 Industrial’s Matthew Davis runs for a touchdown during a District 15-3A, Division I game against Palacios at Palacios.

Industrial’s Matthew Davis jumps over a defender during a District 15-3A, Division I game against Palacios at Palacios.

Industrial’s Matthew Davis is tackled by Columbus’ Kaycon Wilson during a Class 3A, Division I regional round at the Alamodome in San Antonio.

Industrial’s Matthew Davis raises up the trophy after the Cobras defeated Edna 38-14 during a District 15-3A, Division I game at Cobra Field in Vanderbilt.

Industrial’s Matthew Davis runs for a touchdown during a District 15-3A, Division I game against Palacios at Palacios.

VANDERBILT — When Matthew Davis moved from Mississippi to Vanderbilt as a child, he was never impressed by the Industrial football team.

The Cobras had a losing record all through Davis’ junior high years. That all changed when Jamie Dixon was named head coach in 2018.

“When he showed up here, I was like, ‘Everybody’s having fun, this is what everybody wants to be doing,’” Davis said. “And from there, we’ve all just had our heads picked up a lot more than what we used to do.”

Dixon’s arrival sparked a resurgence for the Cobras that’s resulted in three-straight playoff appearances, consecutive district titles and back-to-back Class 3A, Division I regional round appearances.

Along the way, Dixon quickly identified Davis as a weapon for the Cobras offense. First as a running back, inside receiver, punt returner athlete as a sophomore, then as a quarterback his junior year.

“If you look at my history on the offensive side of the ball, I’m going to try to put our best athlete at quarterback,” Dixon said. “That’s what we’ve done and Matthew’s done a good job and his game at quarterback has just evolved as he’s gotten older.”

Davis and Dixon formed a close relationship as Davis found time outside of practice to come to the school and better learn the Cobras offense.

As a sophomore, Davis scored 17 total touchdowns while helping the Cobras to their first district title in 10 years.

As a junior, Davis was named District 15-3A, Division I MVP after throwing for 1,925 yards and 22 touchdowns, while also rushing for 1,241 yards and 21 scores. Ironic given Davis initially didn’t want the job.

“I didn’t want to do it because I had so much fun as a wide receiver, running back my sophomore year,” Davis said. “So me and coach Dixon fought about it for a while. But whenever we started getting into it, I was like, ‘Man, this is a lot of fun actually.’ I had the ball in my hand every snap, not just some snaps, and I’m able to kind of control what I want to do with it whenever I have that opportunity.”

Davis has accepted the leadership responsibilities that come with the position and has worked to expand the offense for running back Clay Martin and wide receiver Clearence Hosey.

“He has a really good arm. He can get it to wherever he needs it,” Hosey said. “During summer workouts we came up here to run routes after we got done working out so we could come out here and already be on the same page.”

After going 11-2 in consecutive seasons, Davis has seen what every win means to the Vanderbilt community.

But after close losses to Columbus and Lago Vista in the regional round, Industrial has sights on breaking into the Region IV final and beyond.

“There’s been about three plays in the last two years where that ball just didn’t bounce the Cobra way,” Dixon said. “Two years ago, we lost to Columbus by six. This past year, we lost in the third round by four. It’s not like we have far to go, we’re there. We’re going to get over that hump and I’m excited.”

Industrial begins the season ranked No. 6 in the Class 3A, Division I preseason poll.

With 15 starters returning, Davis is focused on earning that ranking, rather than resting on past accomplishments.

“You can do two things, you can keep your head and think, ‘Oh you know we’re there, it’s given to us’ or you can just throw it away and say we got to earn it,” Davis said. “That’s what that’s what we’re trying to put into our minds. We need to make sure that we earn that spot and earn what Dave Campbell’s listed us as.”

The following are the offensive stats for Industrial's Matthew Davis.