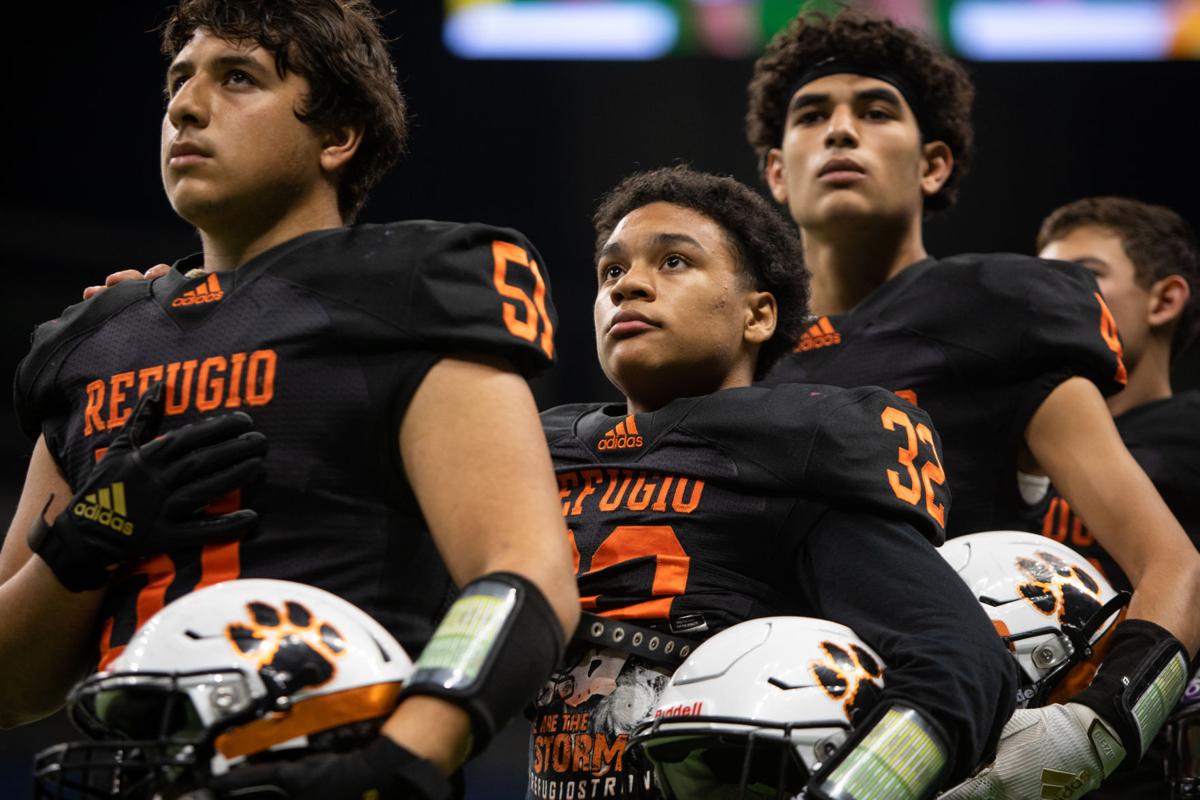 Refugio’s Eziyah Bland (32) stands for the national anthem with teammates Nathan Marsh (51) and Allen Perez (4) before the Class 2A, Division I quarterfinal against Holland at the Alamodome in San Antonio. 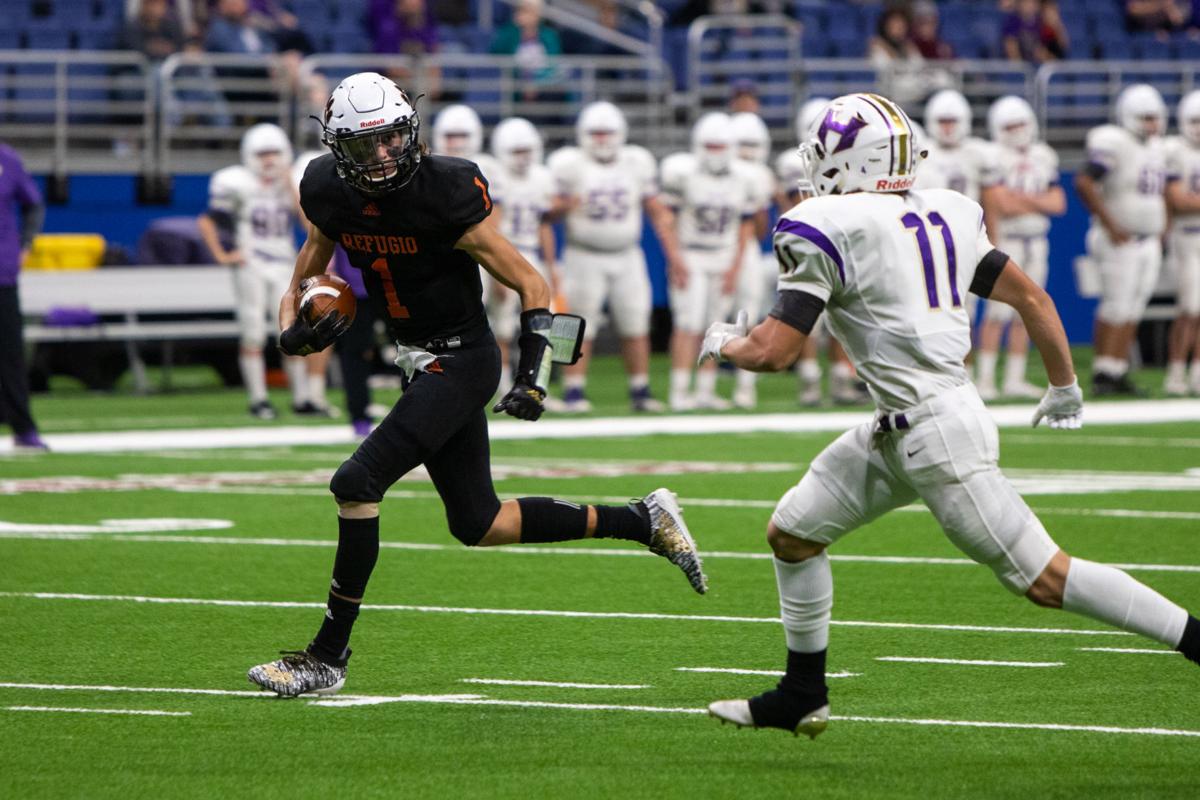 Refugio’s Jordan Kelley runs past Holland defender Ayden Tomasek during the Class 2A, Division I quarterfinal against Holland at the Alamodome in San Antonio.

Refugio’s Eziyah Bland (32) stands for the national anthem with teammates Nathan Marsh (51) and Allen Perez (4) before the Class 2A, Division I quarterfinal against Holland at the Alamodome in San Antonio.

Refugio’s Jordan Kelley runs past Holland defender Ayden Tomasek during the Class 2A, Division I quarterfinal against Holland at the Alamodome in San Antonio.

REFUGIO — Refugio scored four touchdowns in the first quarter of its 49-12 Class 2A, Division I quarterfinal win over Holland.

The Bobcats (14-0) were not only efficient on offense to start the game they were also dominating on defense.

Refugio’s Jordan Kelley recovered a fumble on the first play from scrimmage, and the Bobcats allowed only one first down the first four times Holland had the ball.

“I thought the other night was our most complete game of the season,” said Refugio coach Jason Herring. “We made it look easy, but I’m telling you Holland can play. We played unbelievably well on offense and executed the game plan. But what I was most fired up about was the defense because that quarterback had run over everybody and thrown the ball real well.”

Refugio’s defense has been consistent throughout the season.

The Bobcats have yielded an average of 14 points a game, and less than nine points a game excluding the shootouts with Mart and Shiner, heading into Thursday’s semifinal game against San Augustine (14-0) at FCU Stadium in Cypress.

“It’s just everybody doing their job,” said linebacker Zavien Wills. “We’re making sure that we get it done.”

The Bobcats made the decision to move from an odd to an even front in the summer, primarily to make up for the absence of dominating defensive linemen like Trace Mascorro and Armoni Brown.

“In the past, we had the kids with the body size and we could play the way we play up front,” said defensive coordinator Eli Boxell. “In the summertime, we kind of got together and our defense kind of picked us in terms of personnel we had coming back.”

Boxell gives credit to his players for the smooth transition.

“Anytime you have a leader like Ysidro Mascorro coming back at linebacker, he’s the quarterback to our defense and gets us lined up right,” Boxell said. “He’s a big difference maker and a lot of young kids have stepped up. We’re pleasantly surprised with our defensive line they’ve done a good job of playing with good pad level. Of course, our linebacker corps those three guys are doing a great job for us in terms of fitting right and doing a good job for us.”

The Bobcats have a plus-nine turnover ratio and more importantly, have done a better job of limiting big plays, which have hurt them in the past.

“We just keep our head on and take every play like it’s the last one,” said linebacker Javon Williams. “You have to listen to the coaches. They tell you where it’s going to happen and just listen to them and you’ll get there.”

Refugio knows it will face a challenge from San Augustine, which has the athleticism to match Mart and Shiner.

“We pride ourselves in flying to the football,” Boxell said. “There’s no question these guys are athletic, probably the most athletic team we’ve played all year. They have a ton of speed and are big up front. We’re going to have to play with good pad level up front, we’ve got to take good angles, and we’ve got to tackle well.”

Class 2A, Division I Semifinal

ARLINGTON — Austin Ochoa has thought about winning a state championship since he returned to Refugio two years ago.