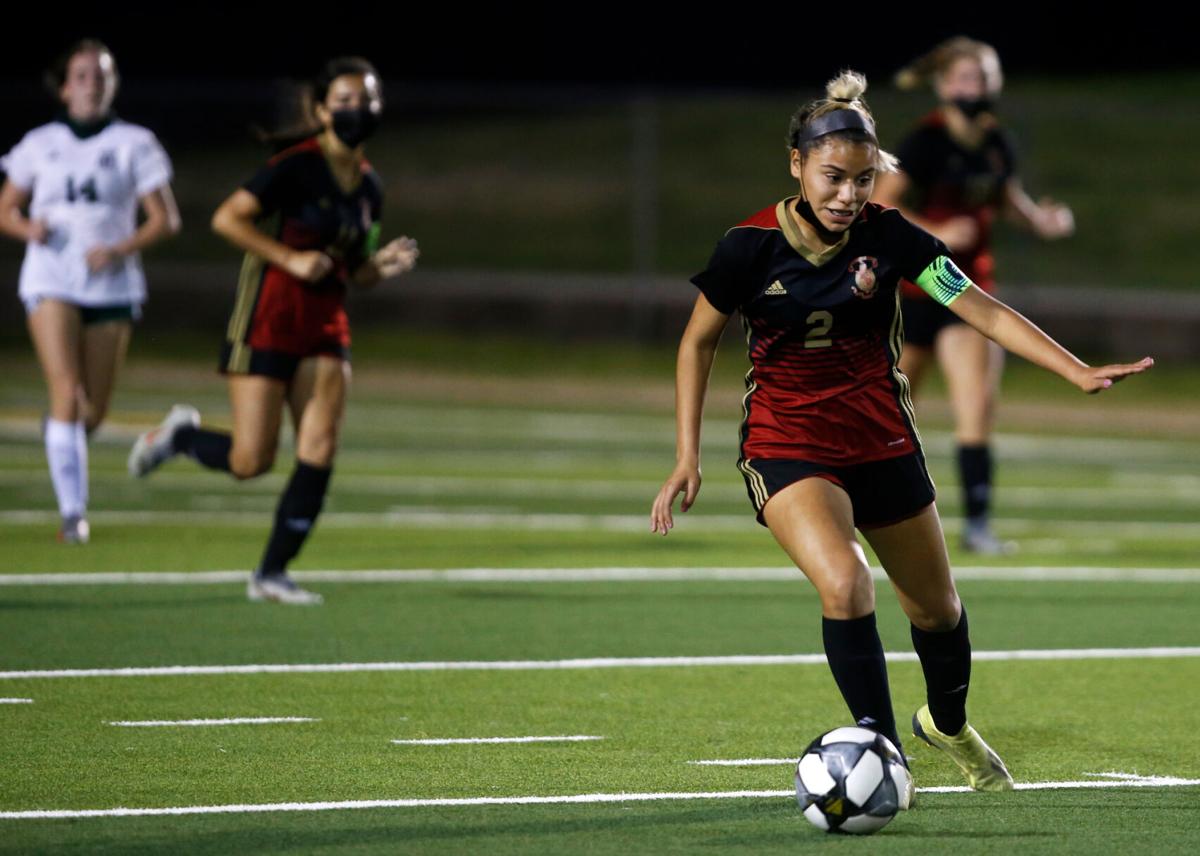 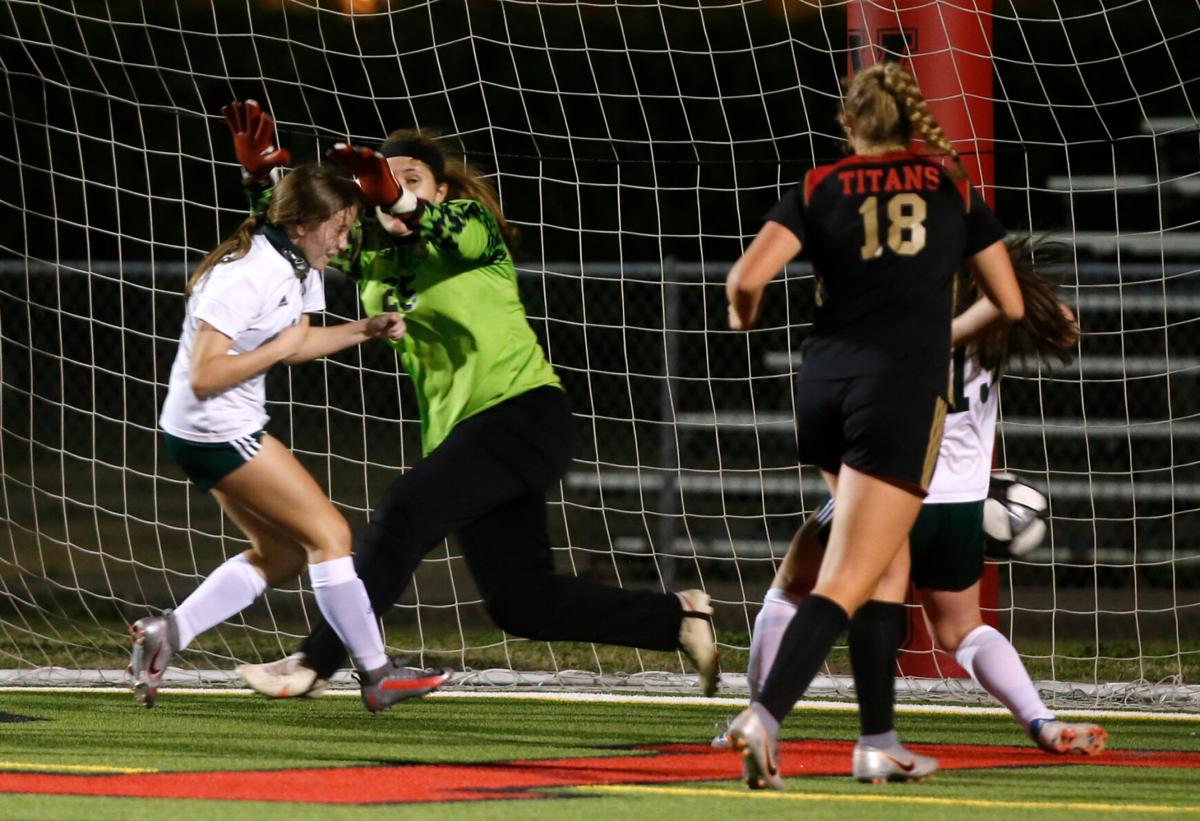 The ball slips past Victoria East’s goalie Emma Seiler for a goal against East during Tuesday’s District 29-51 game against Corpus Christi King at Victoria Memorial Stadium. 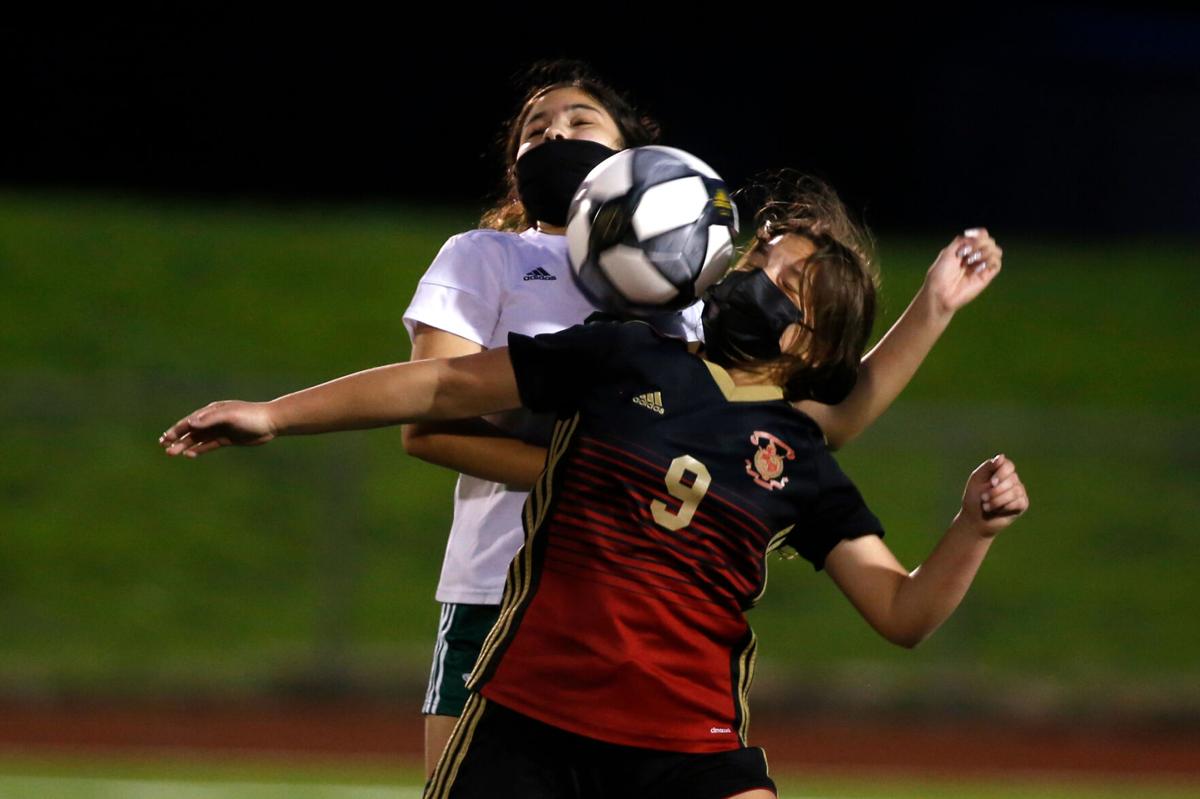 The ball slips past Victoria East’s goalie Emma Seiler for a goal against East during Tuesday’s District 29-51 game against Corpus Christi King at Victoria Memorial Stadium.

It took a late run from senior midfielder Kirsten Ysaguirre for East to secure a point in its District 29-5A opener against Corpus Christi King.

Despite taking the early lead and facing a King team with only 10 players, the Lady Titans fell behind and trailed 3-1 with 10 minutes to play.

But Ysaguirre found a hole in the Lady Mustangs’ defense and went on a 50-yard run and scored in the 78th minute of the game to preserve a 3-3 tie in the district opener.

“It was crazy,” Ysaguirre said. “We all knew that we wanted to keep putting 100%, and we definitely all were. I was happy that we were able to come together as a team and get that goal that we were all working so hard for.”

The game was scoreless at halftime but King had been the aggressor throughout the first.

East (1-5-1) found an opportunity in the second half as King’s Maddie Strasheim received a yellow card setting up a free kick that senior midfielder Isabella Martinez sent into the back of the net, giving East a 1-0 lead at the 48th minute of play.

Strasheim received her second yellow card minutes later, leaving King with only 10 players with 25 minutes left in the game.

“They came in, and we got a little bit of a slow start,” said East head coach Misty Boenig. “It was the first district game for a lot of them. We got that first goal, and we relaxed a little bit, and King came back.”

Despite being down a man, King continued to push the ball.

King equalized after Seiler mishandled a free kick and allowed Reese Maughan to head the ball in the 59th minute.

One minute later, Jordan Rodriguez pushed past East’s defense and scored to put the Lady Mustangs on top.

“I think some of our passes weren’t connecting, but eventually we were able to get it together and come back,” Martinez said. “We still came together as a team and did the best we could and finished strong.”

Maughan scored again after some poor communication by the Lady Titans’ defense and put King up 3-1 with 11 minutes to play.

Sensing urgency, East started pressing up field and found the holes in King’s defense. Two free kicks were easily saved by the King goalkeeper, but freshman forward Caroline Breaux cut into the deficit with a goal off a Ysaguirre assist with five minutes remaining.

The Lady Titans continued to press, and that pressure resulted in Ysaguirre’s goal as East stole a point in the dying minutes.

“I think the biggest thing we’re gonna take out of this is the fact we can fight,” Boenig said. “I think that comeback shows the fire these young ladies have and how much they want it and that the heart is there. If we just get a few more opportunities at practice, those connections are going to occur.”