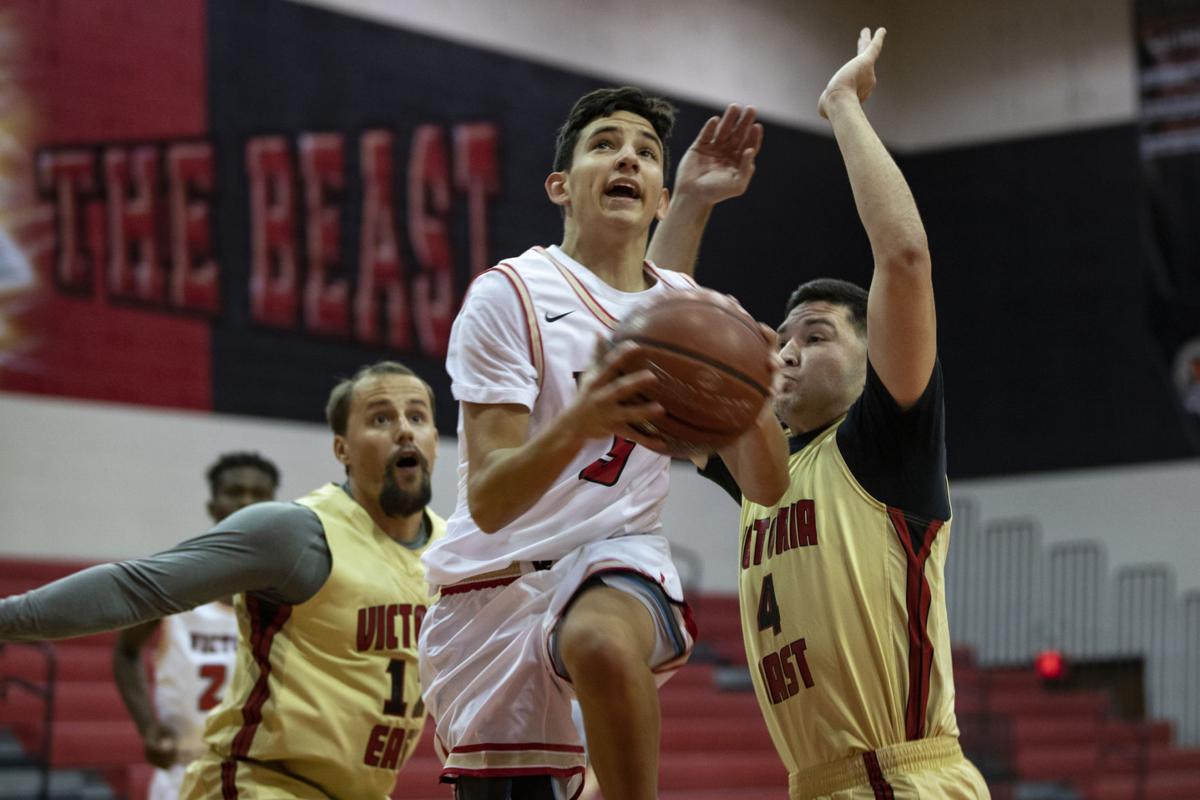 Andrew Alexander goes in for a layup against his older brother, Austin Alexander, during the Victoria East alumni basketball game on Tuesday night. 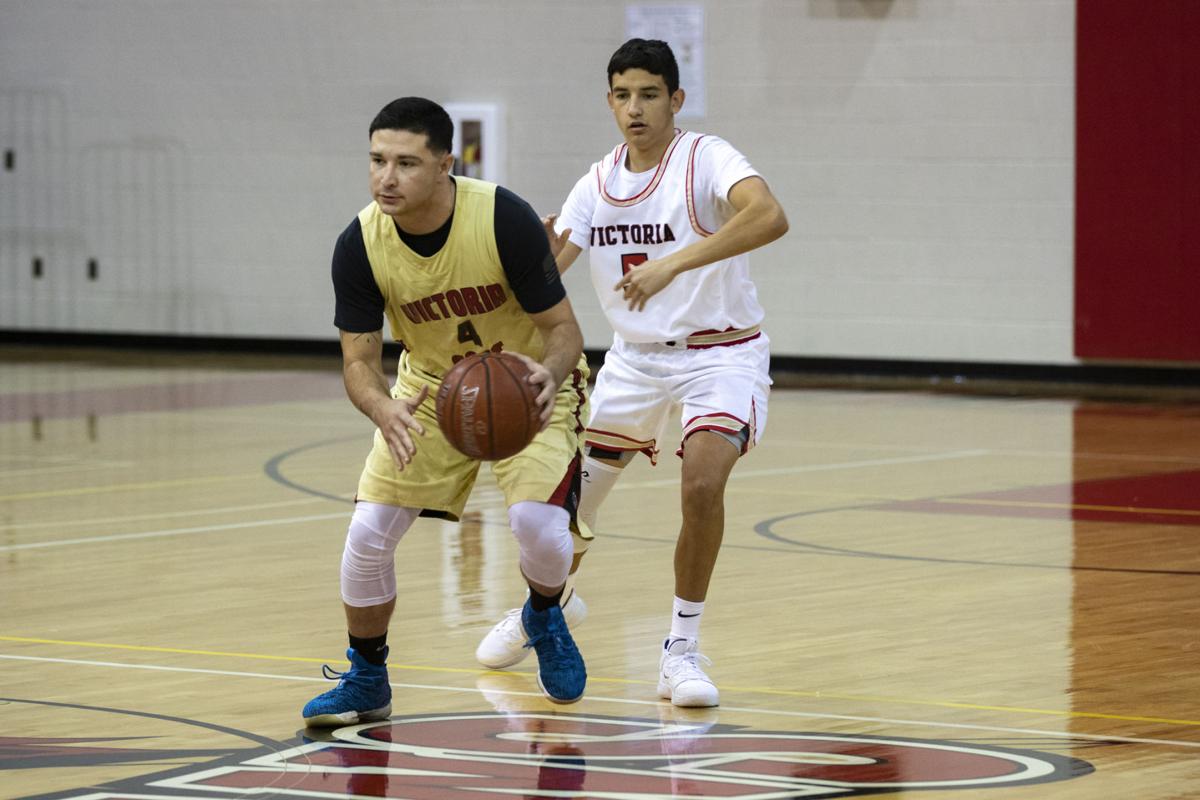 Austin Alexander dribbles the ball while his younger brother, Andrew Alexander guards him during the Victoria East alumni basketball game on Tuesday night. 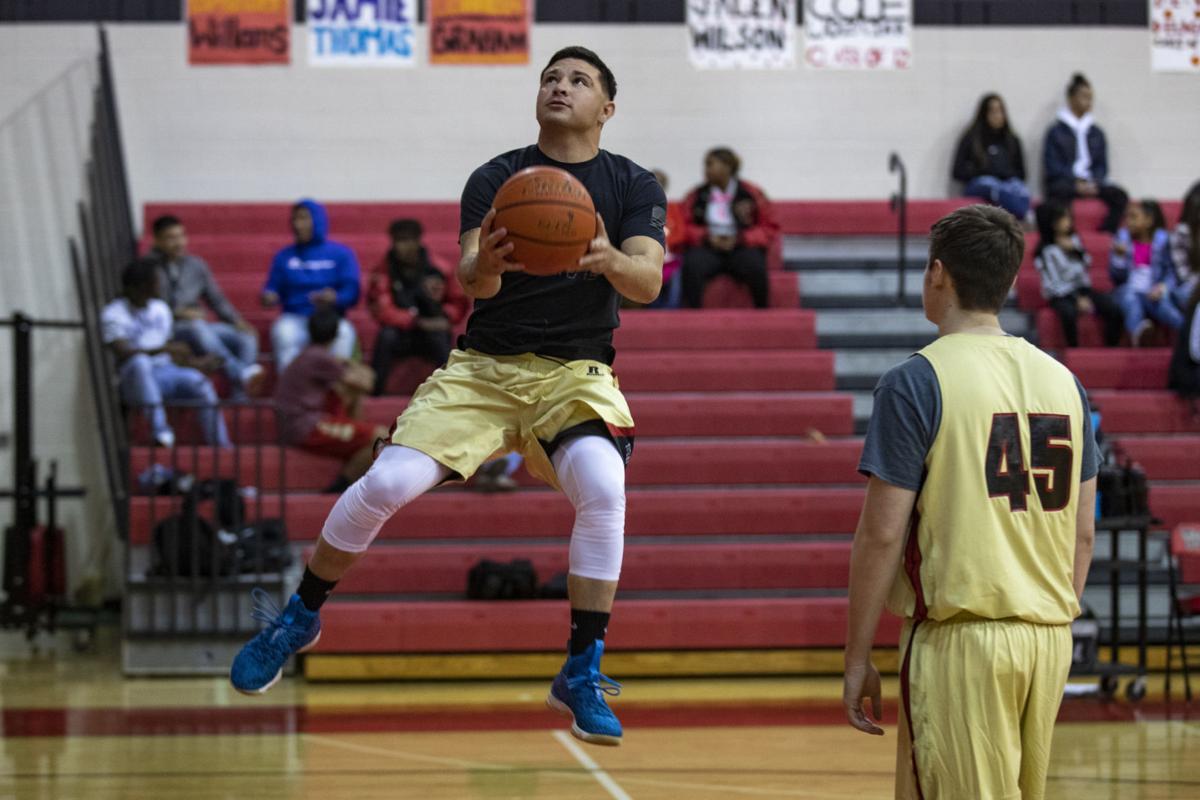 Austin Alexander jumps before shooting a basket during warmups before the Victoria East alumni basketball game on Tuesday night.

Andrew Alexander goes in for a layup against his older brother, Austin Alexander, during the Victoria East alumni basketball game on Tuesday night.

Austin Alexander dribbles the ball while his younger brother, Andrew Alexander guards him during the Victoria East alumni basketball game on Tuesday night.

Austin Alexander jumps before shooting a basket during warmups before the Victoria East alumni basketball game on Tuesday night.

Tuesday seemed like an ordinary day for Victoria East senior Andrew Alexander. Wake up, get dressed and go to school.

However, things quickly went from normal to emotional when he arrived at the East gym for the first Victoria East alumni basketball game Tuesday night.

Alexander got the surprise of his life when his brother, Austin Alexander, was waiting for him, dressed up and ready to play.

Austin, who graduated from East in 2014, was back home after serving in the Marine Corps. He was previously with the Combat Logistics Regiment 25, headquartered in Camp Lejuene, N.C.

“We had a lot of battles growing up,” Andrew Alexander said. “To finally play each other at our peaks is something we’ve been longing for.”

Austin Alexander always made sure to be by his brother’s side growing up.

From basketball practices to cheering him on during games, he and Andrew Alexander were inseparable.

“He always told me to never give up,” Andrew Alexander said. “No matter what, he always wanted me to do my best.”

The East varsity team edged the alumni with a 74-72 win Tuesday night.

Branden Williams finished with 22 points to lead the alumni.

“It’s been crazy seeing him develop,” Austin Alexander said. “With me being in the Marines, I missed a lot of his games, and every time I come home, I see a drastic change in his maturity. It’s great to play against him and his hard work.”

“We try to preach a family atmosphere with the program here at East,” added East coach John Howie. “Having an opportunity for his brother come back and share this experience in the alumni game is something they’re going to remember the rest of their lives.”

The Titans will have familiar faces on the court this season. Andrew Alexander, Nydric Dean, Ethan Farias, Daemien Robles and Ethan White are all returners.

Marquis Kuykendall, Brady Parker, Jaren Wilson, Sam Arce, Ed Clay, Terrence Terrell and Jayden Kueker will look to help East make it back to the playoffs for the first time since 2016.

Clay and Wilson return after spending their junior seasons at St. Joseph.

The Titans open the season Friday against Van Vleck on the road.

The team’s home opener is set for next Tuesday against Bay City.

“I want them to always play their hardest,” said East graduate Cole Wozniak, who advanced to the regional semifinals with the Titans in 2011. “You never know what game is going to be your last, so no matter who is in front of you, go out there and play your hardest.”

“They’re a talented team and they’re young,” Austin Alexander added. “It took a lot coming into a new district, but I think they have matured.”