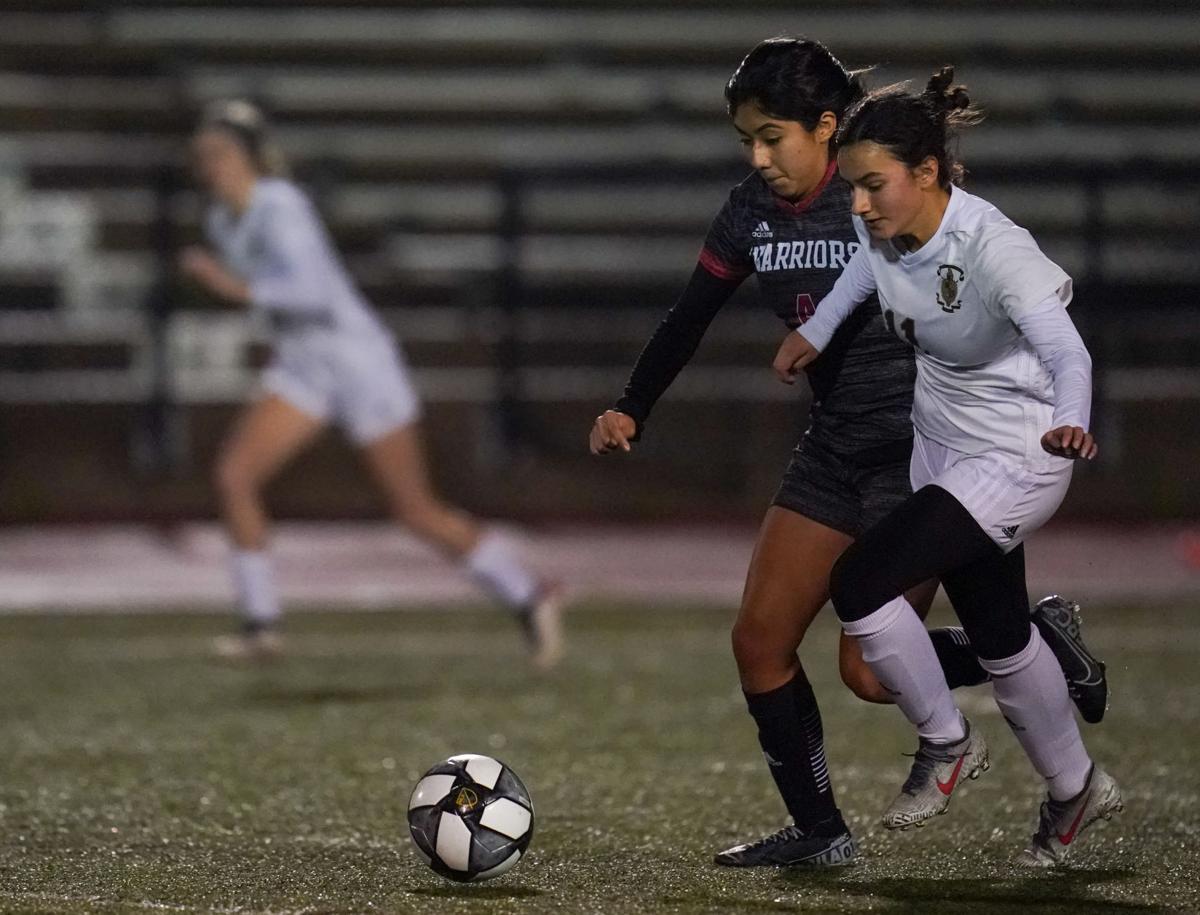 Victoria West’s Camila Salazar and Victoria East’s Kirsten Ysaguirre fight for control of the ball in the first half of Tuesday’s District 30-5A game at Memorial Stadium. 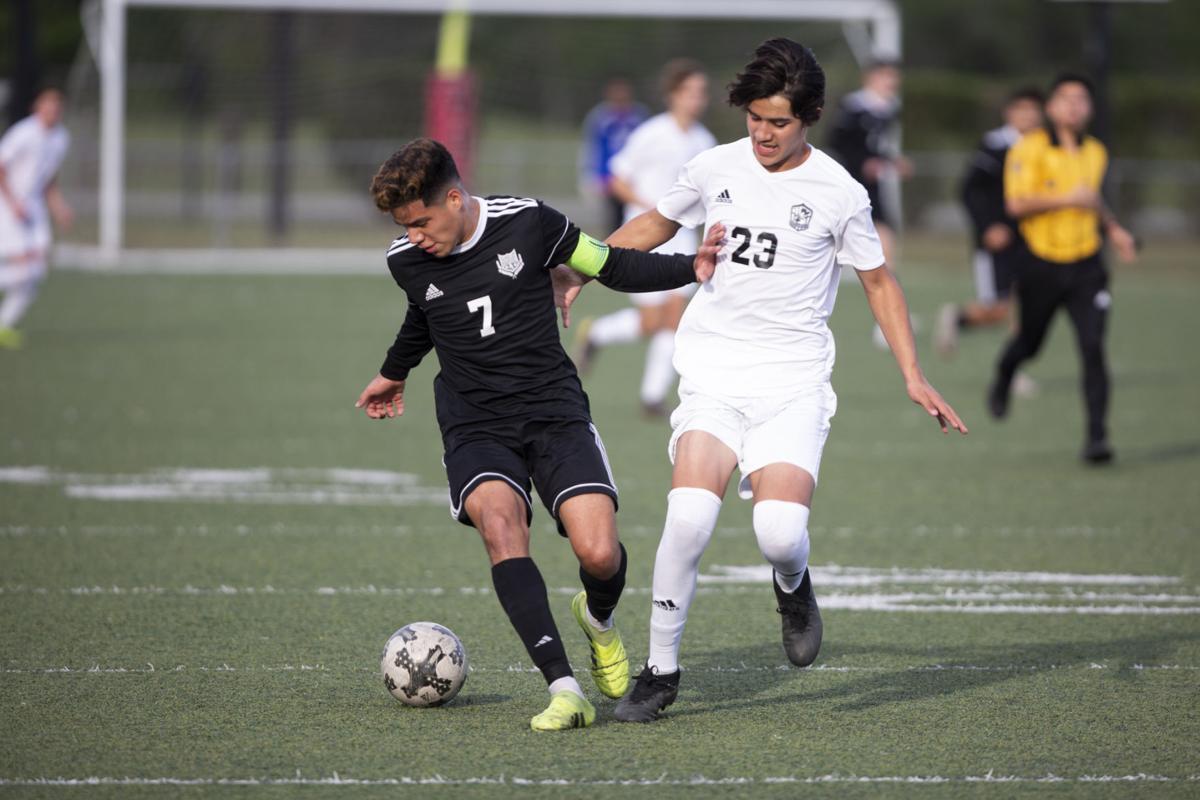 Victoria West’s Camila Salazar and Victoria East’s Kirsten Ysaguirre fight for control of the ball in the first half of Tuesday’s District 30-5A game at Memorial Stadium.

Like so many teams across the country, the Victoria East Lady Titans soccer was gearing up for another deep playoff run when the COVID-19 pandemic stopped the UIL soccer playoffs and all athletic competitions last March.

After making the regional tournament the year before, a group of four year varsity starters had their high school careers abruptly ended.

“They had been the stronghold of our program for the previous three years,” said East head coach Misty Boenig. “Then their senior year to have it canceled, devastating.”

After being named District 30-5A Coach of the Year last season, Boenig will be coaching a much younger squad in 2021.

East had 13 players named to the All-District team and will have to replace the majority of them. Among those lost include three-time District MVP Kyleigh Spree-Kolos.

“They’ve got big shoes to fill,” Boenig said. “Titans soccer is something that these kids have grown up watching and now they get to play, it’s their turn.”

The early practice sessions have contained many team building exercises as Boenig tries to figure out what type of squad she has.

East returns eight players from last year’s squad and these early practices and scrimmages have created opportunities for the younger players to make connections with those seniors.

For now, the Lady Titans are excited to be getting to practice again for the first time in nine months.

“It is the part of the day that we all look forward to,” Boenig said. “We will wear masks all we have to as long as you don’t take this away from us because this is the place where the kids can finally be themselves again. It’s about finding and building new friendships, creating that Titan family atmosphere.”

Warriors healthy and ready to make a run

The Victoria West girls narrowly missed out on a playoff appearance last season amid a slew of late season injuries.

The Lady Warriors have five seniors this season but return a group with a lot of varsity experience.

“Having the same girls back has helped us and we keep building and getting stronger,” said Victoria West head coach Courtney Stoltenberg. “I think one of the most important things in soccer is learning how to play with your team, that’s why you see some of these teams that have grown up together are so good. We are finally getting a taste of what that’s like and it’s refreshing.”

West has started the season 3-0-1 and have focused on a quick counter attacking style this year with the speed they have on the front line.

“It’s great to see the attackers go after it the way they have been,” Stoltenberg said. “They’ve been aggressive and much less passive than we have been in the past. It’s exactly what we’ve wanted to see.”

“We had a lot of injuries last season, but these girls have come back and looked better than ever,” Stoltenberg said. “We got them into practice and you could tell they had been doing what they needed to and working out during the break and that was so good to see. We just have to keep that building on into the season.”

District 29-5A will include Flour Bluff and Veterans Memorial, but Stoltenberg has high expectations for the Warriors.

“I want to win at least one game in playoffs,” Stoltenberg said. “As a coach I haven’t done it yet but I think we can get there. I definitely believe this team has the talent but we have to take care of business and go out hard, ready to go and play every game.”

When the pandemic hit, the Titans soccer team believed it was playing its best soccer of the season.

East had locked up what would have been its third straight playoff appearance with six straight wins, including a 3-1 win against West in the regular season finale.

“They were frustrated,” said East head coach Josh Chaput. “Playoffs would’ve been tough but I felt like this team could’ve gone to the third round at least. I think they fired up this group this year.”

East has the benefit that it returns core members of its squad that will provide senior to leadership to the offensive and defense areas of the game.

Joe Aguirre was named District 30-5A MVP season after scoring 16 goals and 10 assists and will be playing his fourth year on varsity.

Goalkeeper Xavier Moore was named district Goalkeeper MVP after anchoring a defense that only allowed seven goals during district play and produced 12 shutouts.

“They know what it takes to win at a high level, they know the things they’ve got to get done on and off the field,” Chaput said. “It’s something they’ve been used to because they had leadership before them and they want to keep the tradition of East soccer going and continue to try to make playoffs and fight for a district title.”

For now the players are enjoying getting back to practice and having some normalcy after not being able to practice together for nine months.

When the season starts, the goal is to start where they left off, playing high level playoff-ready soccer.

“I feel like we still got a lot of work to do to get back to where we were, but overall this team is resilient,” Chaput said. “A lot of young guys are going to step up and play. They’re going to do whatever it takes to get the W and to move forward.”

After ending a four-year playoff drought in 2019 the Warriors were unable to make back-to-back appearances, finishing sixth in district and on the outside looking in for playoffs.

The Warriors return seven lettermen and have nine seniors on the team, but despite that, head coach Hazael Avila said it is a young team overall returning to the field.

“We do have freshmen and sophomores playing at quite a few positions,” Avila said. “But the team has progressed in practice and got that chemistry that we’ve been looking for. It’s a learning game and we just have to keep getting better.”

Avila is in his second year as head coach of the Warriors and is hoping that the team will come together. The team has started 3-1-1 in non-district play.

“I’m excited for the potential of this team,” Avila said. “We still have to figure ourselves out an improve on possessing the ball, but from what I’ve seen in the preseason it’s been encouraging although there’s still a lot of work to do.”

“The seniors have done a great job of just setting the tone and the biggest difference they’ve helped make is actually in the classroom,” Avila said. “When we went virtual there were some younger guys that struggled with some grades and the seniors really took charge and let them know that they needed to get things done in the classroom as well.”

West will have all it can handle in a District 29-5A that includes Four Bluff, Gregory-Portland and a strong Victoria East team returning.

“This district is going to be a real challenge,” Avila said. “But we want that challenge. It’s going to make us better and push us to be a better team every step of the way, and if we get to the playoffs it will prepare us for whoever we would play and that’s the goal is to get to that point and see how far we can go.”