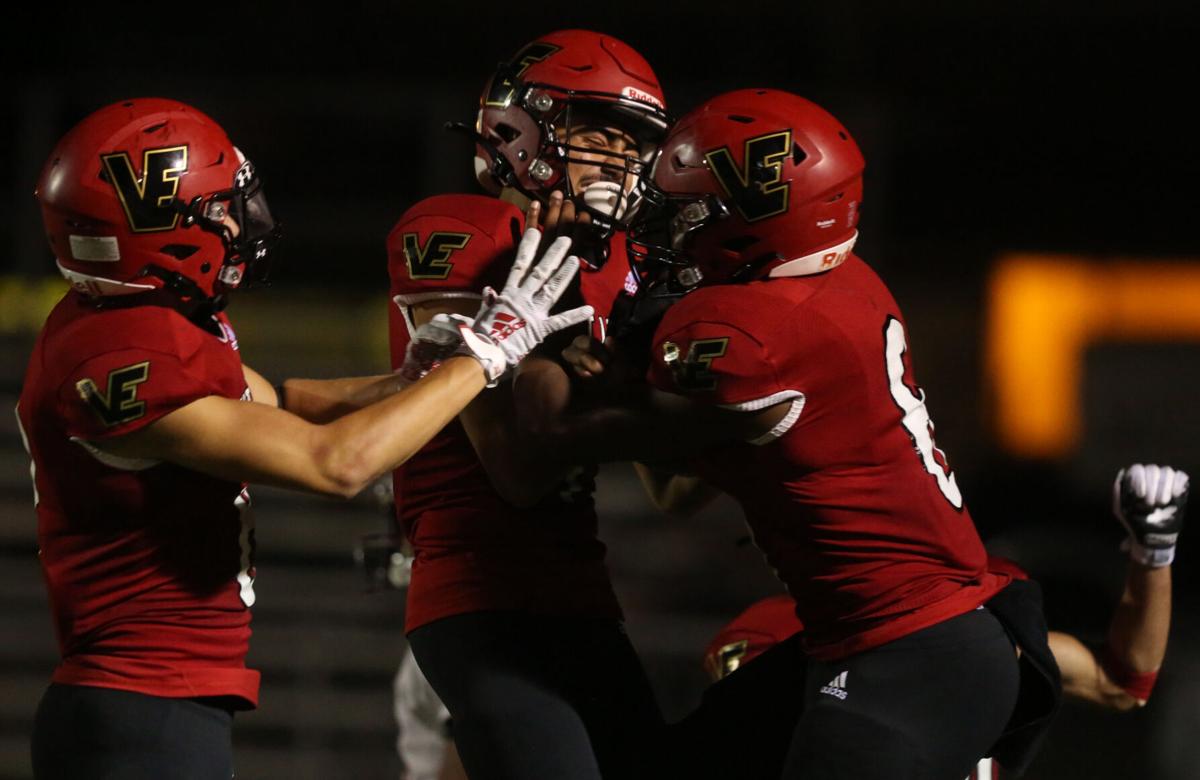 Victoria East’s TJ Vargas, middle, celebrates with his team after catching a touchdown in the fourth quarter during a District 15-5A, Division I game against Flour Bluff at Memorial Stadium on Sept. 24. 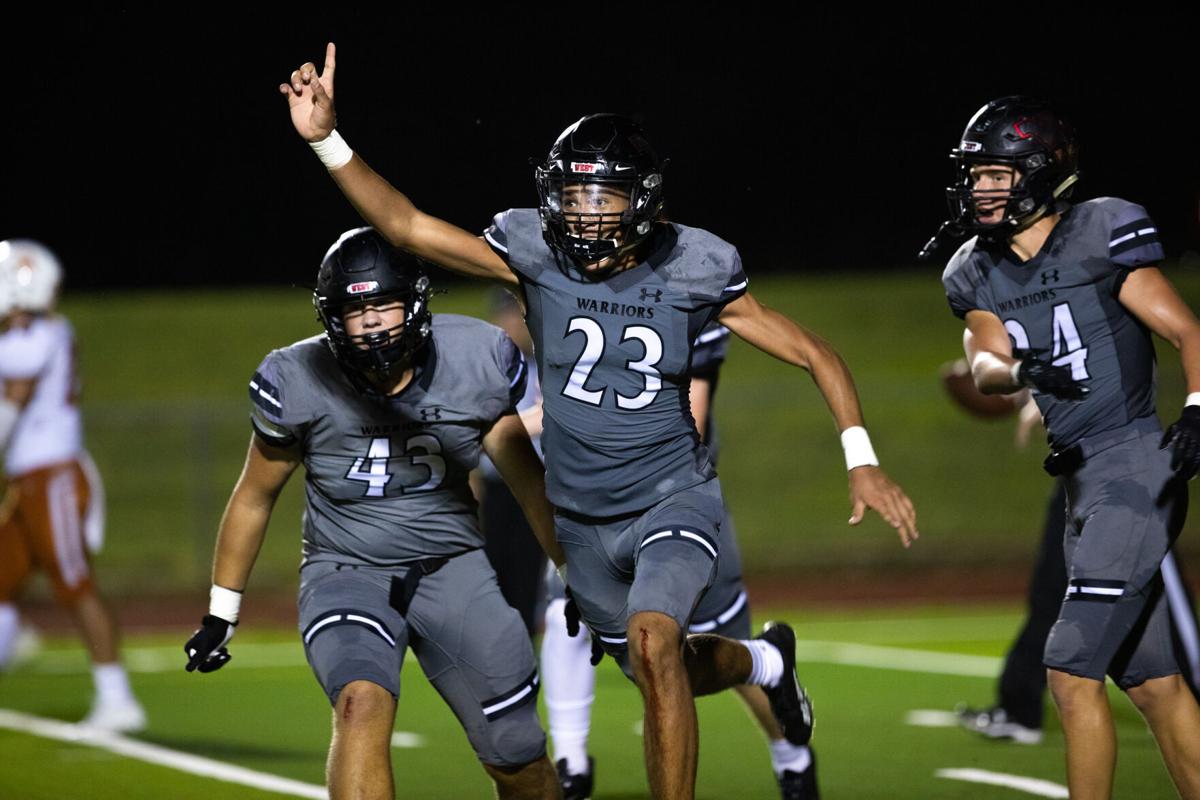 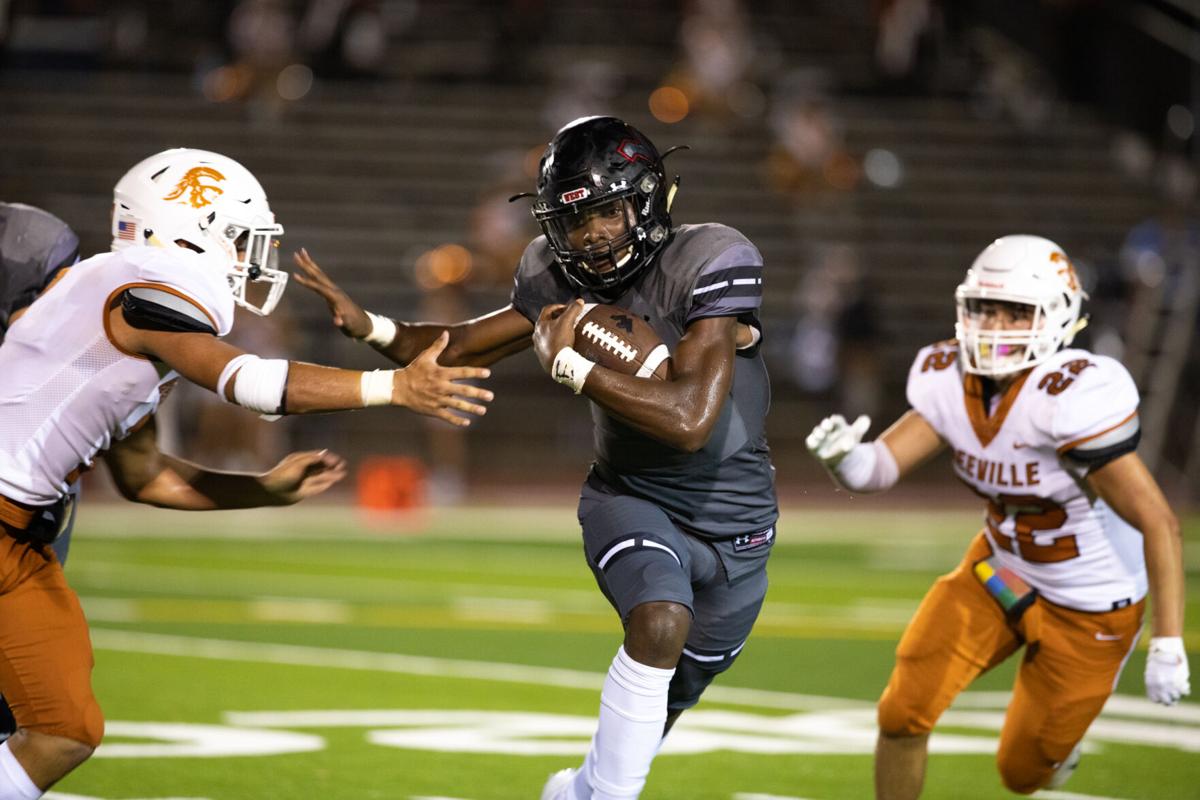 Victoria West’s Dion Green runs past Trojan defenders during a football game against Beeville at Memorial Stadium on Sept. 3. 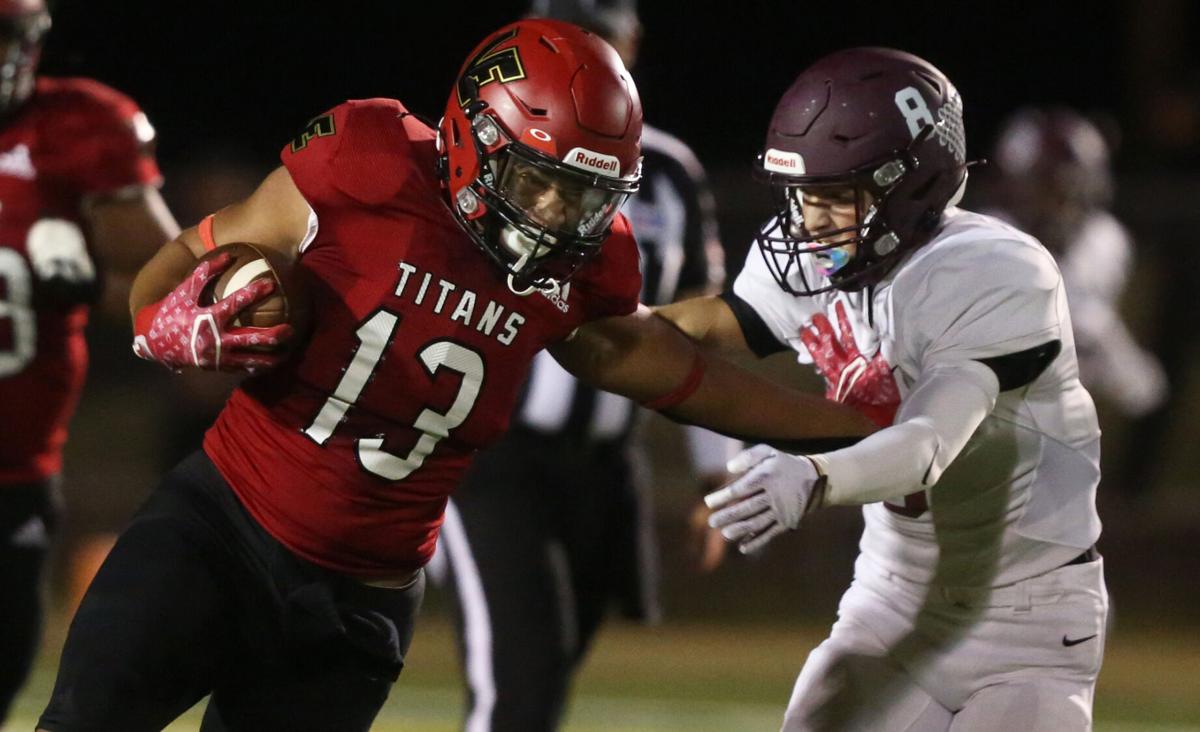 Victoria East’s Terrance Terrell pushes a defender away during a District 15-5A, Division I game against Flour Bluff at Memorial Stadium on Sept. 24.

Victoria East’s TJ Vargas, middle, celebrates with his team after catching a touchdown in the fourth quarter during a District 15-5A, Division I game against Flour Bluff at Memorial Stadium on Sept. 24.

Victoria West’s Dion Green runs past Trojan defenders during a football game against Beeville at Memorial Stadium on Sept. 3.

Victoria East’s Terrance Terrell pushes a defender away during a District 15-5A, Division I game against Flour Bluff at Memorial Stadium on Sept. 24.

Victoria East and Victoria West will meet at Memorial Stadium on Friday night for the 12th installment of the Battle for the Boot.

While always a chance at bragging rights for either side, a win or loss in the crosstown rivalry game is huge for momentum as both teams look to stay alive in the District 15-5A, Division I playoff race.

East and West both had bounce back wins last week with the Titans upsetting Flour Bluff 30-28 and the Warriors dominating Corpus Christi King 61-21.

West is the home team this season and won last year’s matchup 50-20 but will have to replace several players.

After posting 478 yards of offense against King, the Warriors (2-2, 1-1) feel their offense is back on track. They also know they have to keep that same focus with East (3-2, 2-1) flying high following an upset win.

“The team did a great job staying focused,” said West coach Courtney Boyce. “They had something to prove after the bye week. They were eager to get out on the field. King did some good things and our team responded in all three phases.”

The Warriors have had some growing pains offensively. Senior running backs Dion Green and Kibreante Williams have the responsibility to shepherd the offense after losing key skill position players to graduation.

Williams rushed for a team-high 154 yards and two touchdowns in the win over King. Green has carried the ball 59 times for 482 yards and seven touchdowns this year to set the pace for West.

Their leadership is vital to success against East on Friday night.

“It’s a big tribute to being able to help our teammates out, like the sophomores,” Williams said. “It allows us to come out here and do what we have to do.”

West held the Mustangs to 77 yards passing and intercepted four passes. King finished with 334 yards of total offense and mustered seven points in the first half.

The Warriors want to set the tone defensively when they meet their crosstown rivals.

“It’s a big thing,” said West senior defensive lineman Araqua Franklin. “We try to go 1-0 every play. We just communicate and listen, and do what coach tells us.”

East won against Flour Bluff despite head coach Roland Gonzalez and offensive coordinator Jeff Hurta both being out with COVID-19.

Hurta has returned to the team but Gonzalez was still described as day-to-day at the time of this article.

East leads the series 7-4 all-time and junior quarterback Jadon Williams is looking for a revenge game.

Williams started against West in 2020 but was benched midgame and lost his starting job for the rest of the year. Now he’s leading a Titans offense averaging 36 points a game.

Williams has thrown 12 touchdown passes on the year, including four to wide receivers Terrance Terrell and TJ Vargas each.

“We’re super excited,” Terrell said, a senior. “We know a lot of those guys, we know a lot of things that are going on, a lot of barking going on. I think we have everything we need to win this game and get over there and beat him.”

In addition to its passing attack, East has found a rhythm in the run game in the form of Williams (616 yards, 4 TDs) and Ja Carrien Giles (368 yards, 3 TDs).

The key for the Titans is limiting the penalties and creating turnovers on the defensive end.

Despite giving up 13 penalties, East’s defense created turnovers and got a stop in the win over Flour Bluff. The Titans will need to do the same against the Warriors.

“Everyone knows what they need to do to help the team,” said East senior defensive lineman Zak Mendieta. “It’s just another game. That’s all we got to think about it as another game. We’ve just got to play our hearts out, do what we can.”