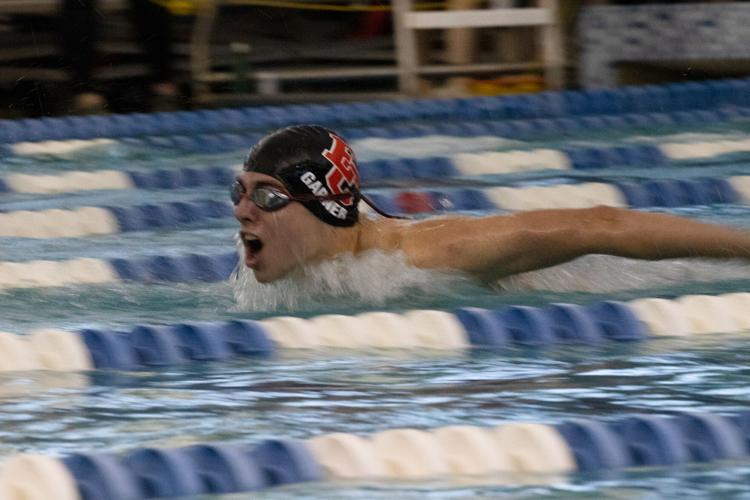 El Campo’s Zane Garner swims in the boys 100-yard butterfly at the District 27-5A swimming and diving meet at the Victoria Independent School District Aquatics Center on Jan. 20. 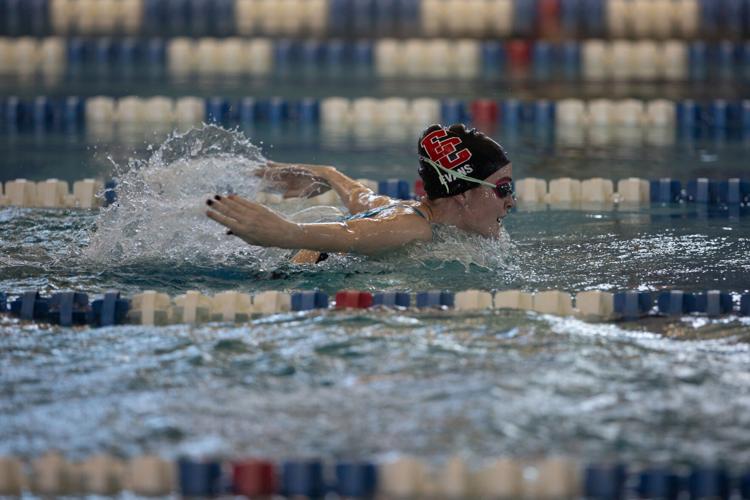 El Campo's Rachel Evans swims the girls 200 yard individual medley during the District 29-5A Swim Meet at the VISD Aquatic Center on Jan. 22, 2021.

El Campo’s Zane Garner swims in the boys 100-yard butterfly at the District 27-5A swimming and diving meet at the Victoria Independent School District Aquatics Center on Jan. 20.

El Campo's Rachel Evans swims the girls 200 yard individual medley during the District 29-5A Swim Meet at the VISD Aquatic Center on Jan. 22, 2021.

Garner has committed to swim at the University of Texas-Permian Basin, while Evans has no plans to continue competitive swimming.

But Evans and Garner are hoping to complete their high school swimming careers at the state meet.

“I’m hoping to win state in the butterfly and backstroke,” Garner said.

“Last year, we were so close,” Evans said. “It was such a bummer to be like a second away. This year, I really want to get it.”

El Campo’s chances of getting to the state meet and making an impact have improved considerably since the UIL introduced a Class 4A in the sport this season.

The Ricebirds and Ladybirds no longer have to compete against Class 5A schools as they have in the past.

El Campo opened its season with a tri-meet against Victoria East and Victoria West on Tuesday at the VISD Aquatics Center.

The Ladybirds come into the season ranked No. 3 in the Texas Interscholastic Swimming Coaches Association Class 4A poll, and the Ricebirds are ranked No. 5.

“It is a big change,” said El Campo coach Kelly Garner. “The stakes are a lot higher starting out. The kids are more excited. They know that during the season it’s not going to make that much difference, but when we get to district and regional, they’re going to do a lot better and be a lot more competitive.”

Zane Garner earned a callup to the state meet last season after finishing fourth in the 100-yard backstroke at the regional meet.

He placed 22nd in the event, but has no doubt he can improve on that finish this season.

“I think there was one 4A swimmer ahead of me,” Zane Garner said. ”I guess I’m a lot more motivated. I have a chance to do something really good at state.”

Evans was part of the El Campo 200-yard medley and 200-yard freestyle relay teams that just missed getting called up to the state meet.

“I do feel like we have a better chance. I really do,” Evans said. “The boys are so awesome at what they do. You look at the girls and go ‘Wow’ they can do all of that. It’s special.”

Zane Garner finished first in the 100 butterfly and 100 backstroke, swam a leg on the winning 200 freestyle relay and a leg on the 200 medley relay that placed second during Tuesday’s tri-meet.

Evans swam a leg on the winning 200 medley and 200 freestyle relays and finished second in the 50 and 100 freestyle.

“The boys, I wish I had more numbers,” Kelly Garner said. “We’ll have to wait until after football and see what happens. The girls, I believe, are going to do well. I believe as a whole they’ll finish really well. “

Victoria West and Victoria East were swimming in their second meet of the season, after competing in Corpus Christi on Saturday.

West junior Shelby Travis continued the progress she made last season at the tri-meet.

Following are team results from Tuesday’s tri-meet at the VISD Aquatics Center.

Zane Garner made swimming for UT-Permian Basin a reality Tuesday by signing a letter of intent in the El Campo meeting room.