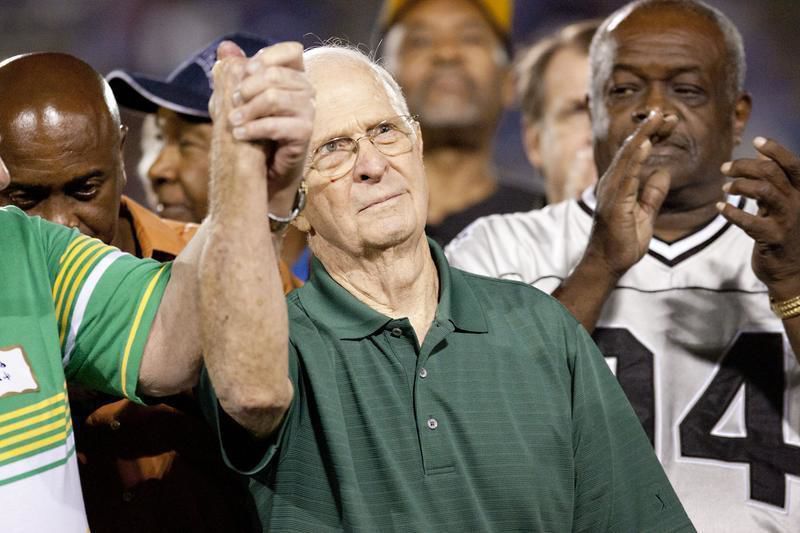 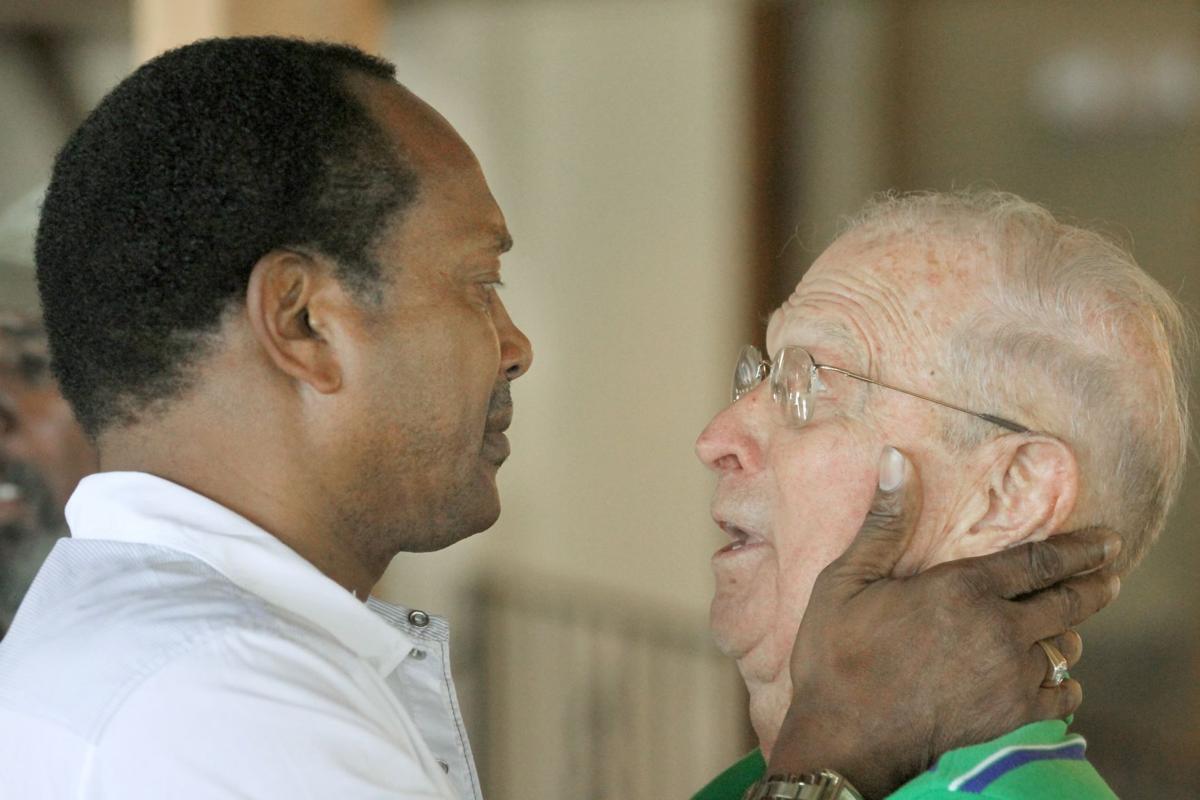 Larry Whittington, a Cuero Gobbler football player from the 1970 team, was overwhelmed with emotion after seeing his high school coach Buster Gilbreth at a reunion of players from the 70s at the Venue in Cuero.

Larry Whittington, a Cuero Gobbler football player from the 1970 team, was overwhelmed with emotion after seeing his high school coach Buster Gilbreth at a reunion of players from the 70s at the Venue in Cuero.

Buster Gilbreth wasn’t able to celebrate Cuero’s fourth state championship in person so he did the next best thing.

Gilbreth picked up the phone and called his former players to share his feelings with them.

“It brought back a lot of memories,” Gilbreth said. “They were real good memories for me. I was just on the phone talking to everybody I knew and wishing them congratulations. It was very nice. It was just watching the past and the future and all that. It was just an enjoyable thing for me.”

Gilbreth laid the foundation for Cuero’s football success during his 10 years as head coach.

Gilbreth, 88, watched on television from his Austin residence as Cuero defeated Pleasant Grove 40-28 in the Class 4A, Division II final at AT&T Stadium in Arlington.

“It was a thrill,” he said. “I only had to leave the room one time. I got a little nervous so I went out, but I came back in. I had to walk a little bit.”

Gilbreth couldn’t help but notice how much the game has changed since he retired from coaching over three decades ago with an overall record of 224-92-3.

“They’re deep snapping it,” Gilbreth said. “They’re snapping it straight back to the quarterback when we used to take it from the center. It’s a little more wide open than we were. I guess you would call it, we were 3 yards and a cloud of dust and now they’re not 3 yards, it’s 50 yards. They still do a good job. It’s a faster game.”

Gilbreth got a chance to meet Cuero coach Travis Reeve earlier this year when he toured the school’s new facilities.

“I knew his daddy some,” Gilbreth said of former Cuero coach Mark Reeve. “I don’t get to see him that much but I did get to talk with him that day and he’s a nice man and a good coach.”

But he was visited by former Cuero players Henry Sheppard, Victor Mathis, Quincey and Arthur Whittington and others.

“It was very nice,” Gilbreth said. “A bunch of them came over to see me. I wanted to go to the one they played in Austin. I was afraid to jinx them.”

Gilbreth was especially impressed watching Jordan Whittington, who set a state finals record by rushing for 334 yards and five touchdowns.

Whittington also caught a touchdown pass, led the team in tackles and was named the offensive and defensive player of the game.

Gilbreth coached members of Whittington’s family, including his father, Quincey, and uncles, Arthur and Larry.

“A lot of it reminded me of them,” Gilbreth said. “I think Jordan’s probably a little faster. Jordan and Quincey, they are a lot alike. Of course, that was the Whittingtons running. You know Arthur was right there too. Jordan is a fine back. He’s a good team man.”

One of Gilbreth’s first calls after the game was to Quincey Whittington.

“I called Quincey and congratulated him and jumped on him a little bit,” Gilbreth joked. “I do that all the time.”

Gilbreth admits he doesn’t get to watch football as often as he used to, but he keeps up with Cuero as much as possible.

“He’ll be up there. I think it’s good,” Gilbreth said. “I know he’s coming up here early. He just needs to forget about all that high school stuff and keep his head screwed on good and he’ll do it. I think he’ll do it. Arthur and them will advise him.”

Following are coaches who have led Cuero to the state final.