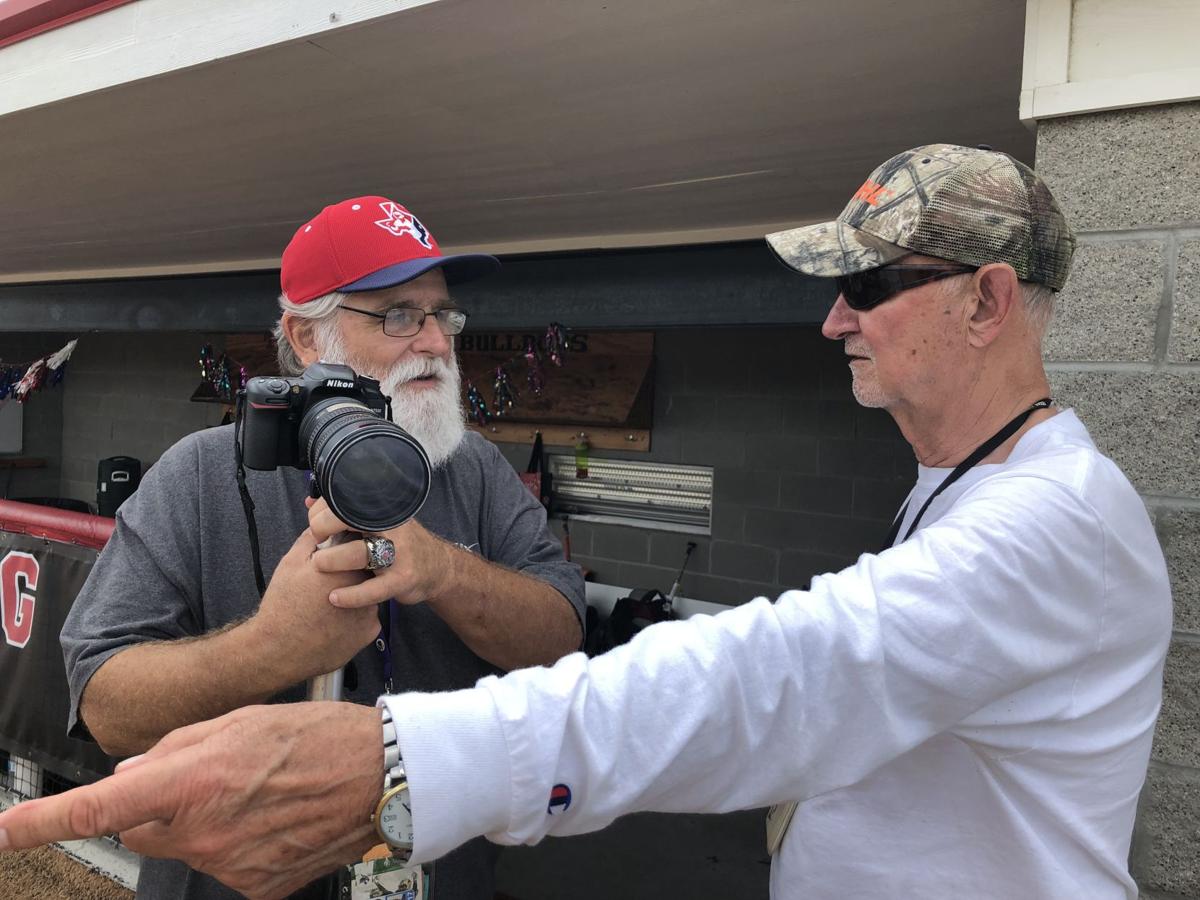 Dean Kibler, left, talks with Chuck Grafe outside the dugout before Game 1 of the 2019 Class 3A regional semifinals between Hallettsville and Santa Gertrudis Academy at the Three Rivers softball field. 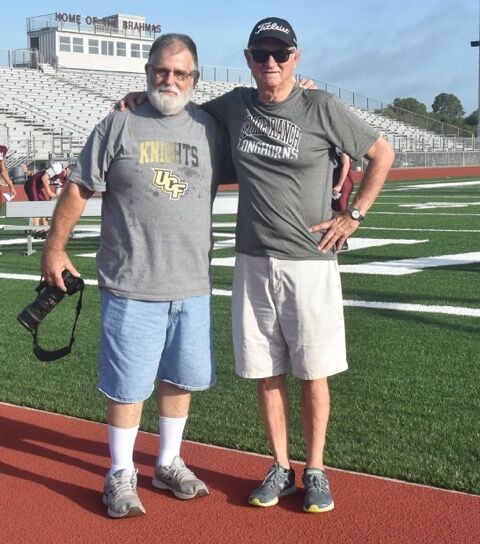 Dean Kibler, left and Chuck Grafe, pose for a photo at Brahma Memorial Stadium in Hallettsville. 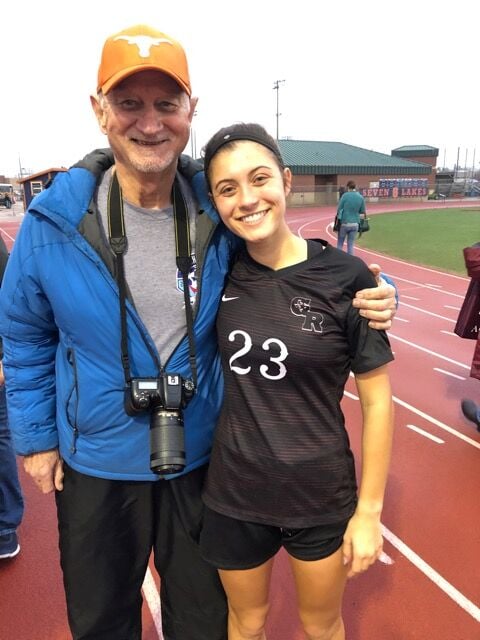 Dean Kibler, left, talks with Chuck Grafe outside the dugout before Game 1 of the 2019 Class 3A regional semifinals between Hallettsville and Santa Gertrudis Academy at the Three Rivers softball field.

Dean Kibler, left and Chuck Grafe, pose for a photo at Brahma Memorial Stadium in Hallettsville.

The pair have covered sports in the community for over 50 years.

If you’ve ever watched a game there, chances are you’ve seen a man with a perfectly groomed beard walking around with a camera or another gentlemen sitting in the dugout with a scorebook and a pair of reading glasses.

Grafe, 73, is the sports editor of the Hallettsville Tribune-Herald, and he’s held that role since 1986 when he retired from the Southern Pacific Railroad Company.

Kibler, 70, has been the team photographer for Hallettsville since 1999, where he met Grafe for the first time.

“He’s always been there to help me out of a jam,” Grafe said. “Dean is a friend to those who have no friends.”

“Chuck is a walking sports encyclopedia from Hallettsville,” Kibler added. “He can tell you anything that’s happened sports wise. It amazes me how he remembers everything.”

Grafe grew up in Hallettsville and graduated from Sacred Heart in 1965. His interest in sports writing began in high school when he wrote for the school paper and played on the football, basketball, baseball and track teams.

He was an all-district selection in basketball, a hurdler in track and played tight end in football. As Grafe would say, ‘We called it “end” back then.’”

“It was every kids dream to play football back then,” Grafe said. “Playing sports and getting together with coaches is why I like doing what I do. Coaches used to give me keys to the gym so I could get their scorebooks.”

He’s also served as an adjutant in Hallettsville for 22 years.

During his college days, Grafe read the Houston Post every Sunday.

Naturally, he skipped straight to the sports section.

When he was 10, his mother bought him Street and Smith Football Magazines, and he listened to Southwest Conference football games on the radio every Saturday since he didn’t have a television.

“Back in my day, they used to tell us kids weren’t going to amount to anything,” Grafe said. “But in my opinion, the kids today are a lot smarter. I like being around them and getting to know them. A lot of good kids go through Hallettsville.”

Kibler lives in Goliad and commutes 65 miles to take photos for Hallettsville sports teams. He’s also the team photographer for the Victoria Generals during the summer.

Kibler grew up in St. Louis, Mo., and served in the Navy, where he met his wife, Sylvia.

Little did he know, that’s where his passion for sports photography would begin.

“In Boling, I would shoot pictures from the sidelines for fun during games,” Kibler said. “I would just mess around with the cameras, but when I got to Goliad, I started with the newspaper there (The Texan Express). They asked me if I would shoot a game and I got one good shot.”

Kibler moved to Goliad in 1985, but began shooting Hallettsville athletics in 1999 when former Goliad coach Kyle Taylor left to become the football coach of the Brahmas.

Taylor wanted Kibler to be his team photographer and the rest is history.

Rain or shine, Kibler makes it his priority to capture every moment of Hallettsville athletics.

He even posts his photo galleries on Facebook so athletes and parents can save the photos for free.

“It’s been nice,” Kibler said. “They have a lot of good people in Hallettsville. They treat me really good, and it’s been nice to do this. It’s comfortable and it’s a friendly atmosphere. I’ve made some really good friends here.”

Grafe and Kibler could share a lifetime of stories from over the years, but both admitted there’s a few moments that stand out more than the rest.

For Grafe, covering Hallettsville vs. Van Vleck at El Campo’s Ricebird Stadium in 1973 was his standout moment as a sports writer.

It was the first game he covered for the Hallettsville Tribune-Herald.

“I used to type my stories on a typewriter and stick them under the door at the office,” Grafe said. “The coaches would even give me game film after the game to help me write my story.”

For Kibler, watching the Hallettsville baseball team win the state championship in 2013, photographing the softball team at three state tournaments and capturing the boys and girls basketball teams compete for a state title are moments he’ll never forget.

“When the boys won the state championship in 2013, I was in the press photography area and things were happening quick,” Kibler said. “Being able to be there for that, watching the softball team and basketball teams have so much success will always stand out to me.”

But both have no plans of slowing down.

Sports have been less frequent because of the COVID-19 pandemic, but the pair stay busy by spending time with family.

Grafe makes sure to keep an eye on his granddaughters Riley and Reagan Grafe. Riley was a four-year starter and four-year all-district selection on the soccer team at Richmond George Ranch High School.

Reagan will be a junior at George Ranch and will play volleyball and soccer. She’s also a member of the school’s FFA program.

Kibler keeps busy by photographing the Generals and staying in touch with his grandson, Cameron Reyes, in Florida.

“I’ll keep doing this as long as I can,” Grafe said. “I still feel good, but it’s a day-to-day thing for me. I always told my kids, ‘If you wake up everyday and you don’t want to go to work, you have the wrong job.’ There might have been a few days when I didn’t want to go, but I always did. I love this job.”

“They’ll have to carry me off the field,” Kibler added. “I might as well die out there than somewhere else. I don’t plan on quitting anytime soon unless they run me out. I can’t explain it... It’s my passion to do this and Hallettsville gives me the opportunity to do it.”