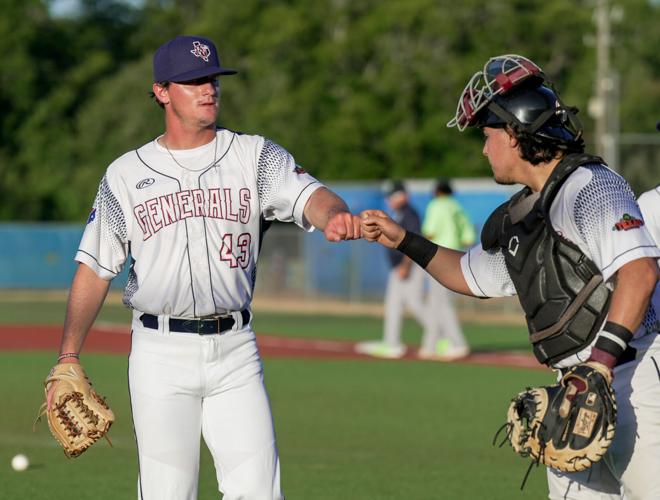 Victoria’s Colson Geisler is congratulated after getting the final out of the first inning by his teammates. 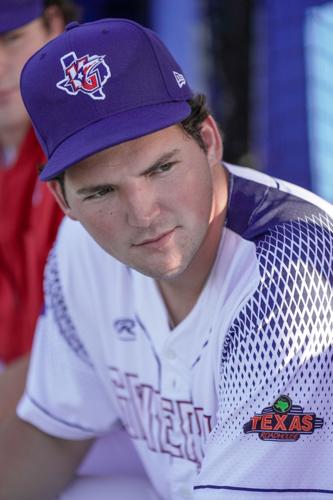 Victoria's Jared Barta, of Cuero, looks at the action on the field as one of the few area native players for Victoria this summer. 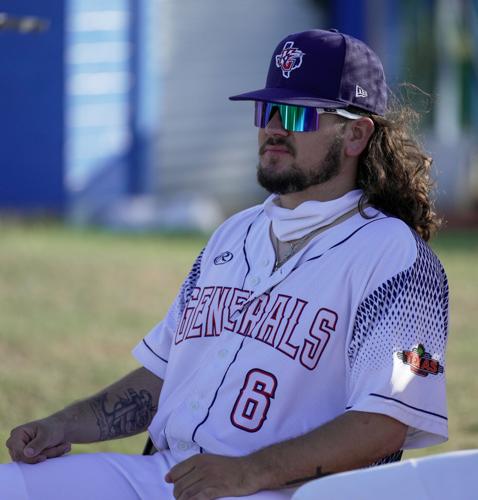 Victoria's Caleb Cude, of Port Lavaca, is a pitcher for the Victoria Generals this summer. 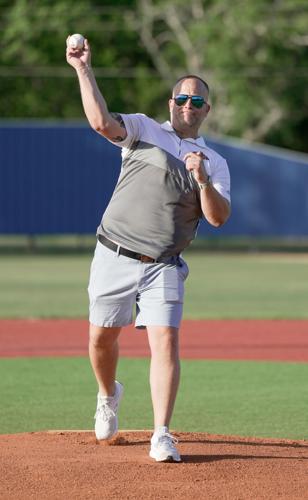 Alban Lunsford, the managing partner of Victoria’s Texas Roadhouse restaurant, was given the honor of throwing out the first pitch of the season for the Generals. 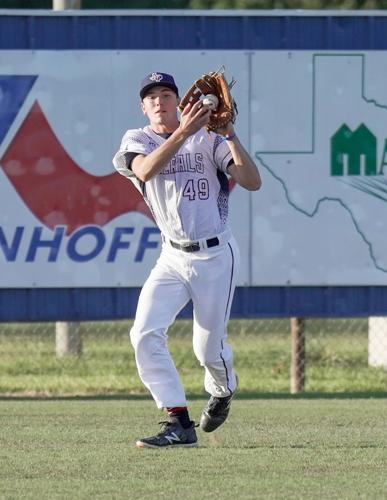 Left fielder Jace Russell, of Victoria, made the second out of the first inning in left field when he caught a fly ball. 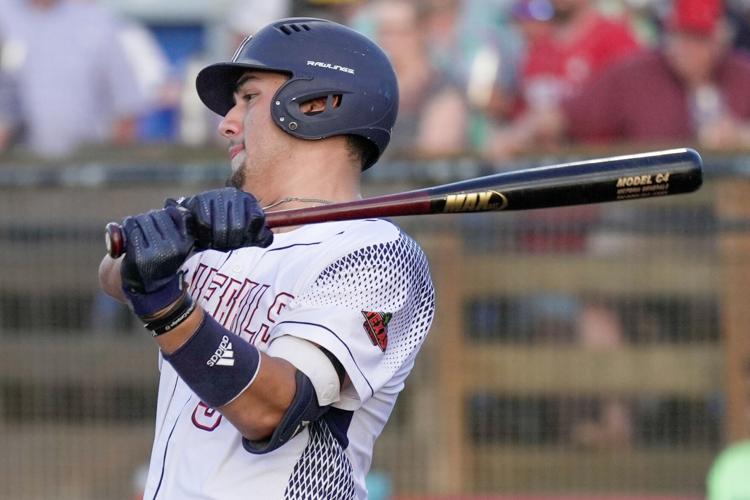 Victoria's Austin Ochoa grounded out to shortstop for his first at bat for the Victoria Generals this season. The Refugio native is back for his second season playing for the Generals.

Victoria’s Colson Geisler is congratulated after getting the final out of the first inning by his teammates.

Victoria's Jared Barta, of Cuero, looks at the action on the field as one of the few area native players for Victoria this summer.

Left fielder Jace Russell, of Victoria, made the second out of the first inning in left field when he caught a fly ball.

A large crowd greeted the Victoria Generals at Riverside Stadium on Tuesday night for their Texas Collegiate League season opener against the Seguin River Monsters.

The Generals began their 14th season with a following that has remained loyal through the years.

“I feel like it has gotten better every year except for 2020 when a lot was messed up not only here but in the world,” said Generals head coach Michael Oros, who is in his eighth season as head coach. “I feel like the community is embracing us more and word is getting out. If you don’t know it is, people are starting to try it out and see and become a part of it.”

Luis Martinez from Texas A&M-Kingsville took the mound for the Generals, who redesigned the party deck before the season.

The Generals continued their in-game promotions, and the beer batter is back again this season.

The Generals have recruited players from across the country, and many return for a second or third year.

“It’s just the atmosphere that these fans bring to every game,” said first baseman Chase Sanguinetti, who played for the Generals last season. “There’s really nothing like it. I’ve played baseball all over the country, and this is definitely my favorite place to play at.”

Austin Ochoa, a Refugio graduate, is back with the Generals for the second consecutive summer.

Ochoa, who played at UTSA and will transfer to the University of Texas-Tyler in the fall, has no hesitation about making the drive from Refugio to play for the Generals.

Dean Kibler resides in Goliad, but has been taking pictures for the team since 2011, when Yoakum’s Ryan Wagner and Hallettsville’s Shorty Cook coached the team.

“This is my summer vacation,” said Kibler, who posts pictures on his Facebook page for the players.

Oros attributes the players’ willingness to return for a second or third season to the reception they receive from the community.

“I tell our players that this city is just small enough where everyone knows who you are and what you do,” Oros said, “but big enough that it has everything you need in terms of lifestyle and things to make you better.”

The Generals continue their homestand Wednesday night against the Brazos Valley Bombers.

The Seguin River Monsters made their Texas Collegiate League debut a successful one.

The River Monsters scored four runs in the first inning and went on to an 8-3 season-opening win over the Generals.

The large crowd had hardly settled into their seats before the River Monsters had four hits and batted around in the first inning.

Seguin starting pitcher Matthew Johnson did not allow a hit and had six strikeouts in his five innings of work.

The Generals used six pitchers, who combined to yield 16 hits.

The Generals had only four hits, including a two-run home run by Cole Turney, who also hit an RBI double.