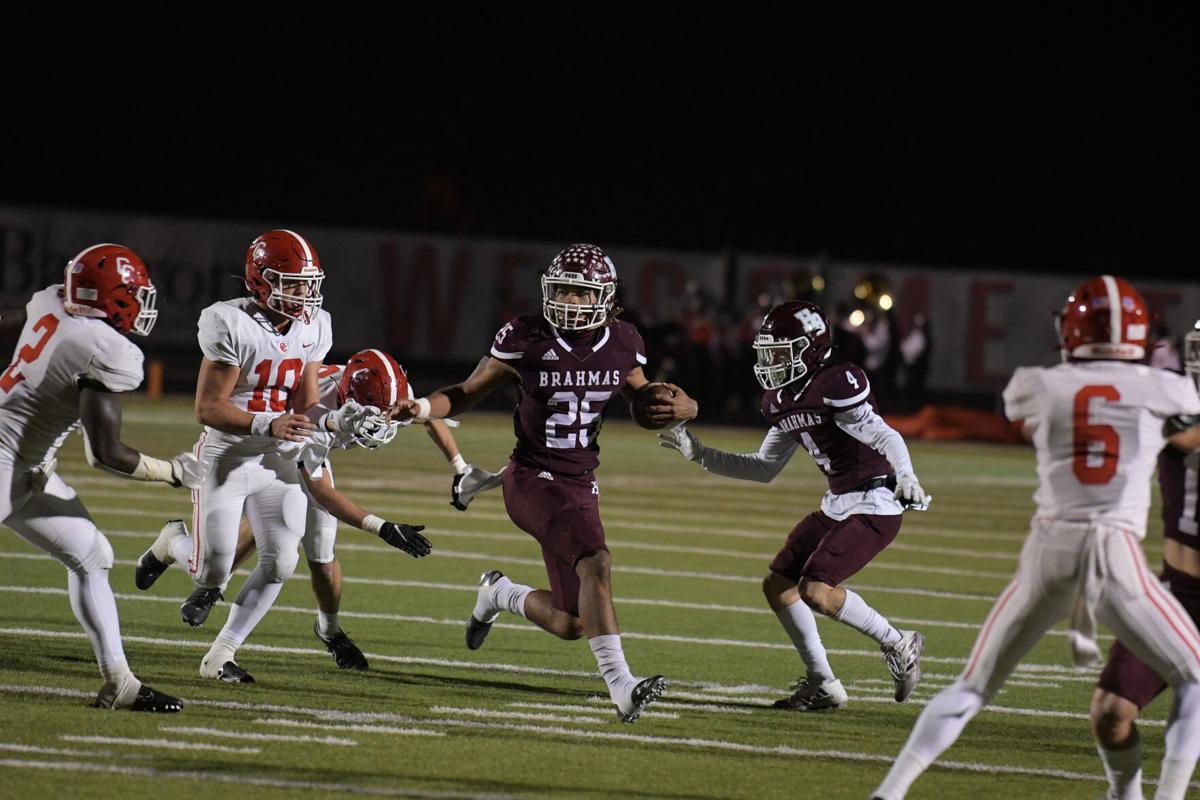 Jonathon Brooks looks for a hole in the Columbus defense during a Class 3A, Division I at Bastrop Memorial Stadium. 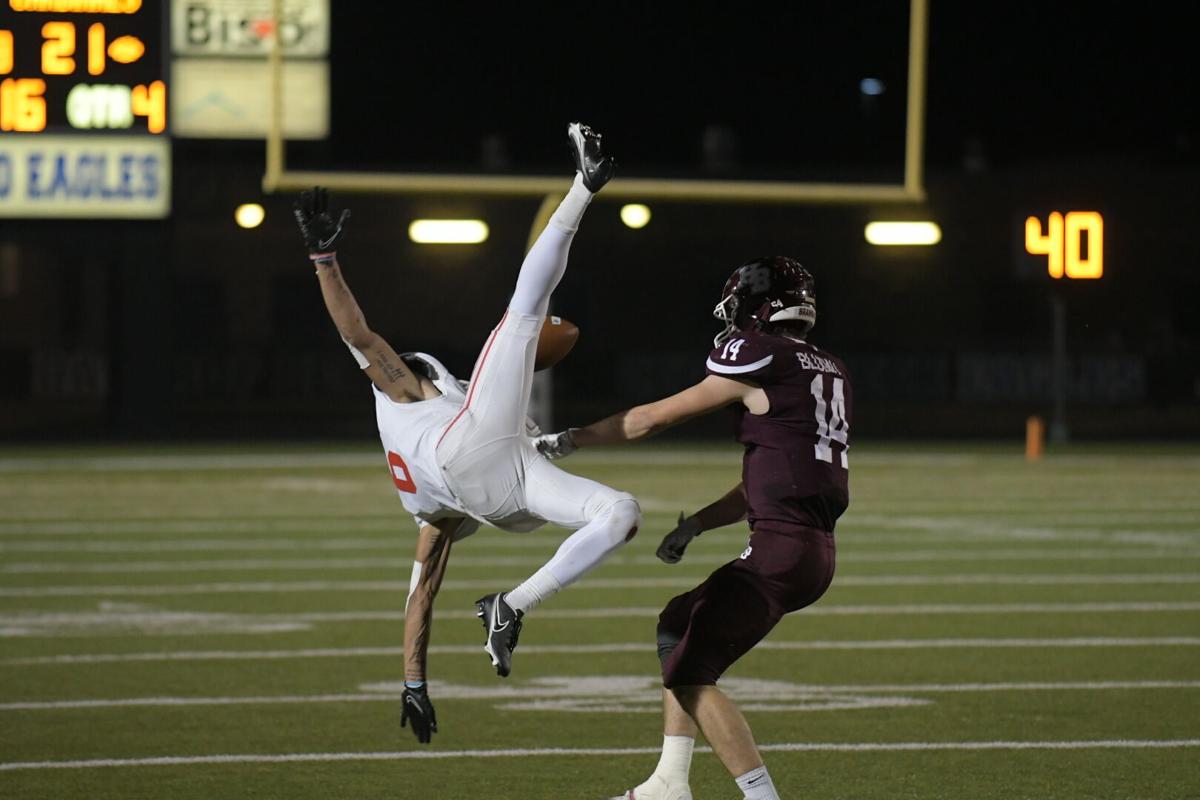 Hallettsville’s Luke Bludau breaks up a pass intended for Columbus’s Kaycon Wilson during a Class 3A, Division I at Bastrop Memorial Stadium. 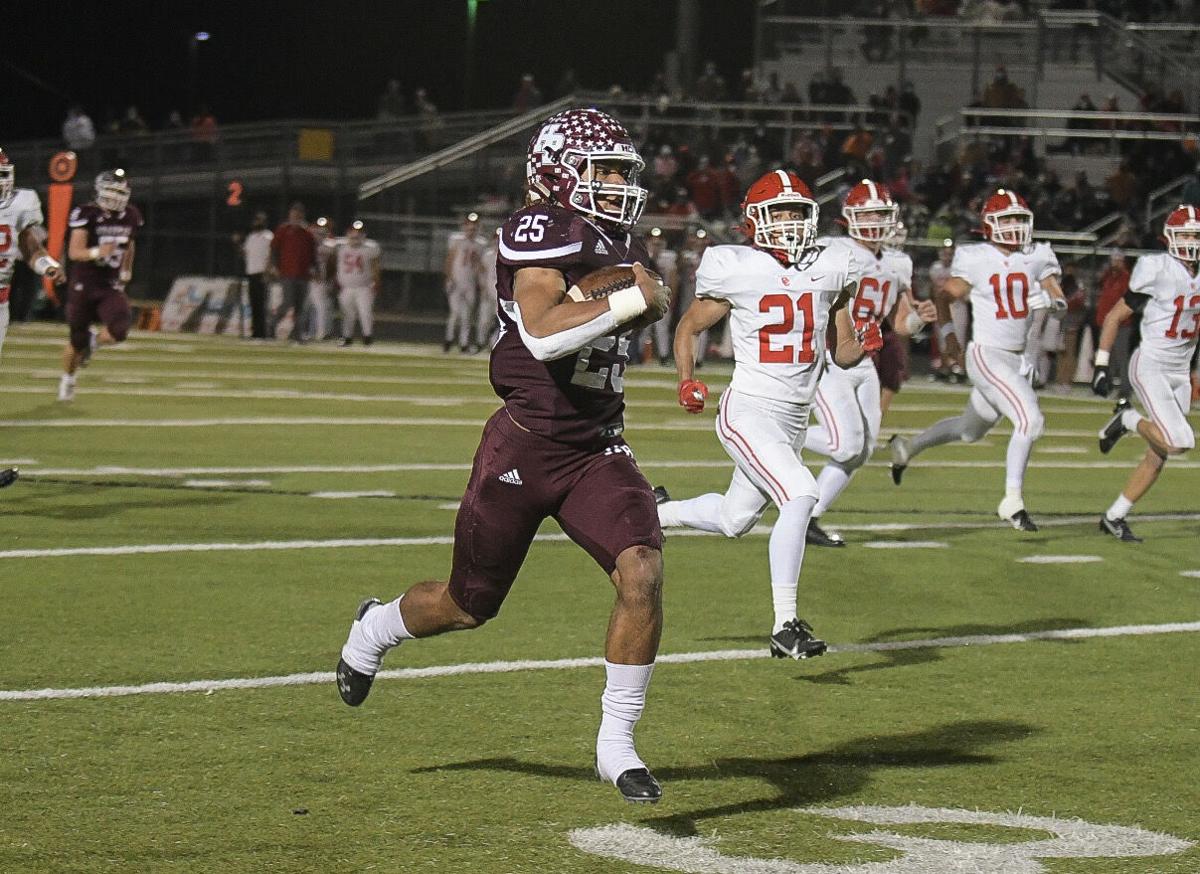 Hallettsville’s Jonathon Brooks runs past Columbus defenders during a Class 3A, Division I quarterfinal game at Bastrop Memorial Stadium.

Jonathon Brooks looks for a hole in the Columbus defense during a Class 3A, Division I at Bastrop Memorial Stadium.

Hallettsville’s Luke Bludau breaks up a pass intended for Columbus’s Kaycon Wilson during a Class 3A, Division I at Bastrop Memorial Stadium.

Hallettsville’s Jonathon Brooks runs past Columbus defenders during a Class 3A, Division I quarterfinal game at Bastrop Memorial Stadium.

BASTROP — It was a matchup of standout running backs in the Class 3A, Division I quarterfinals for the second straight year, but it was Hallettsville that erased the demons of its past.

Senior running backs Jonathon Brooks and Kion Hurd were on display for Hallettsville and Columbus, respectively, but it took a missed field goal near the end of regulation to seal the 23-21 victory for the Brahmas.

Hallettsville avenged last year’s 45-25 playoff loss to Columbus and advanced to the state semifinals for the first time since 1976.

“Sometimes you need a little bit of luck here and there. Things have to fall in place,” said Hallettsville head coach Tommy Psencik. “It’s neat to see kids grit it out like that for 48 minutes. That game definitely could’ve gone either way, but we’re thankful it went in our favor.”

Brooks finished the night with 26 carries for 192 yards and one rushing touchdown.

The one touchdown came at the end of the first quarter, as he broke free for a 76-yard score to tie the game at 7 as time expired.

But Brooks’ play of the game came in the fourth quarter on special teams.

With Hallettsville having cut the deficit to four points, Brooks caught a punt at the Columbus 46-yard line and burst through a hole for what proved to be the game-winning touchdown.

“This win means everything,” Brooks said. “It’s our first time as a community in 40 years going to the fifth round. I’ve got to do what I’ve got to do to help the team get to where we need to be.”

Unlike the past two games between these schools — Hallettsville beat Columbus 45-14 in district play — neither team was able to run away with the game.

Columbus’ game plan was obvious from the start, drain the clock and keep the Hallettsville offense on the sideline.

Hurd was used massively throughout the game, finishing with 41 carries for 180 yards and two rushing touchdowns.

The Cardinals’ offense fed him the ball, following the plan of maintaining possession and burning clock. Hurd’s second touchdown came in the third quarter and put the Cardinals up by 11 — the largest lead of the game.

The touchdown capped off a drive where Columbus went 99 yards in three plays, highlighted by quarterback Ty Thomas’ 87-yard pass to Ryan Barnes.

Barnes seemed destined for the end zone, but Brooks chased him down for the touchdown-saving tackle.

“Columbus has a great ball club, and they did some things to us that we didn’t expect up front,” Psencik said. “(Hurd) is a great running back, and their offensive line is a great line. My hat’s off to Columbus, but our kids showed grit in the second half.”

Hurd’s touchdown put the Brahmas in a must-score situation. They marched to the Columbus 11-yard line before quarterback Trace Patek delivered with an 11-yard touchdown pass to Deven Wood on fourth and goal.

Sixty-six seconds later and the Brahmas found themselves with their first lead of the game, thanks to Brooks’ punt return touchdown.

“We worked together as a team,” Brooks said. “We were down. We battled back and came out with the win.”

Even so, the Cardinals had over nine-minutes of game time to work with and went on another long drive. Knowing they had a reliable kicker, a game-winning, walk-off field goal was a possibility.

“I was right by my teammate (Deven Wood), and he said they were going to make it,” Brooks said. “I looked at him, and I said ‘Please don’t make it.’ When he missed it, it didn’t feel real.”

Hallettsville moves on to play Llano in the semifinals. Date and venue are to be determined.