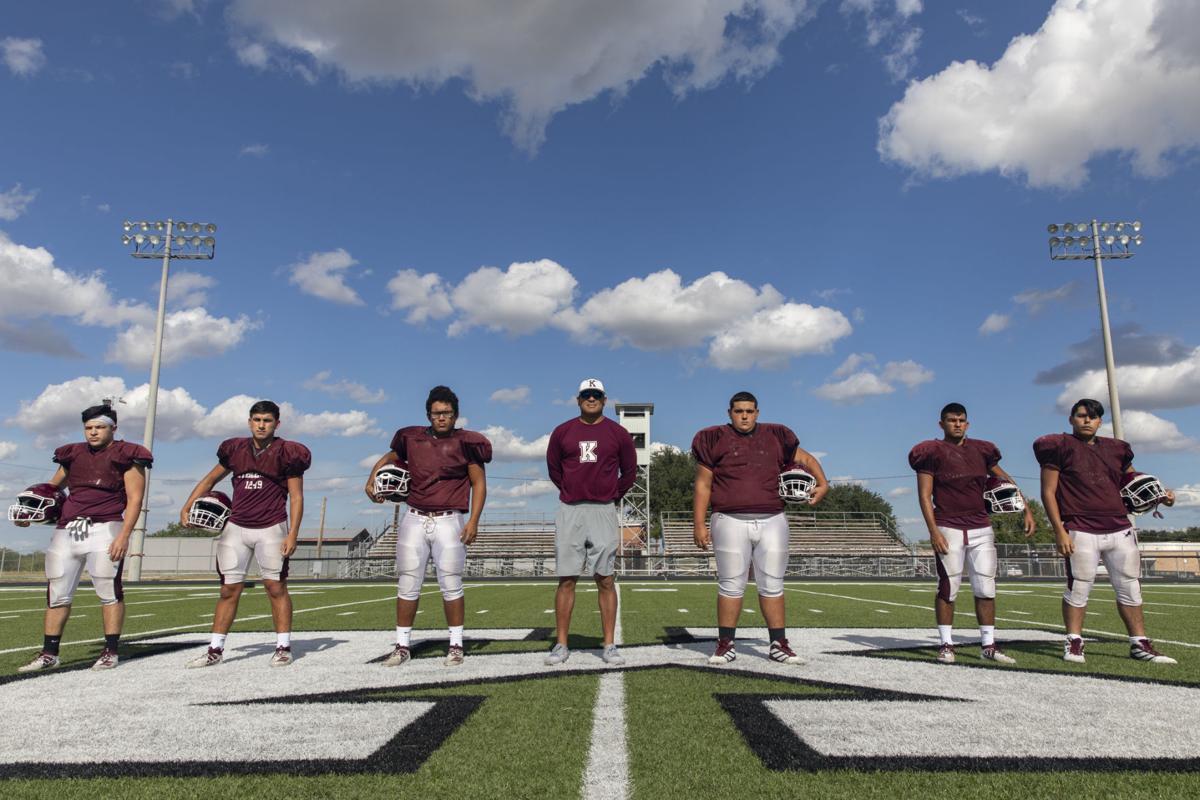 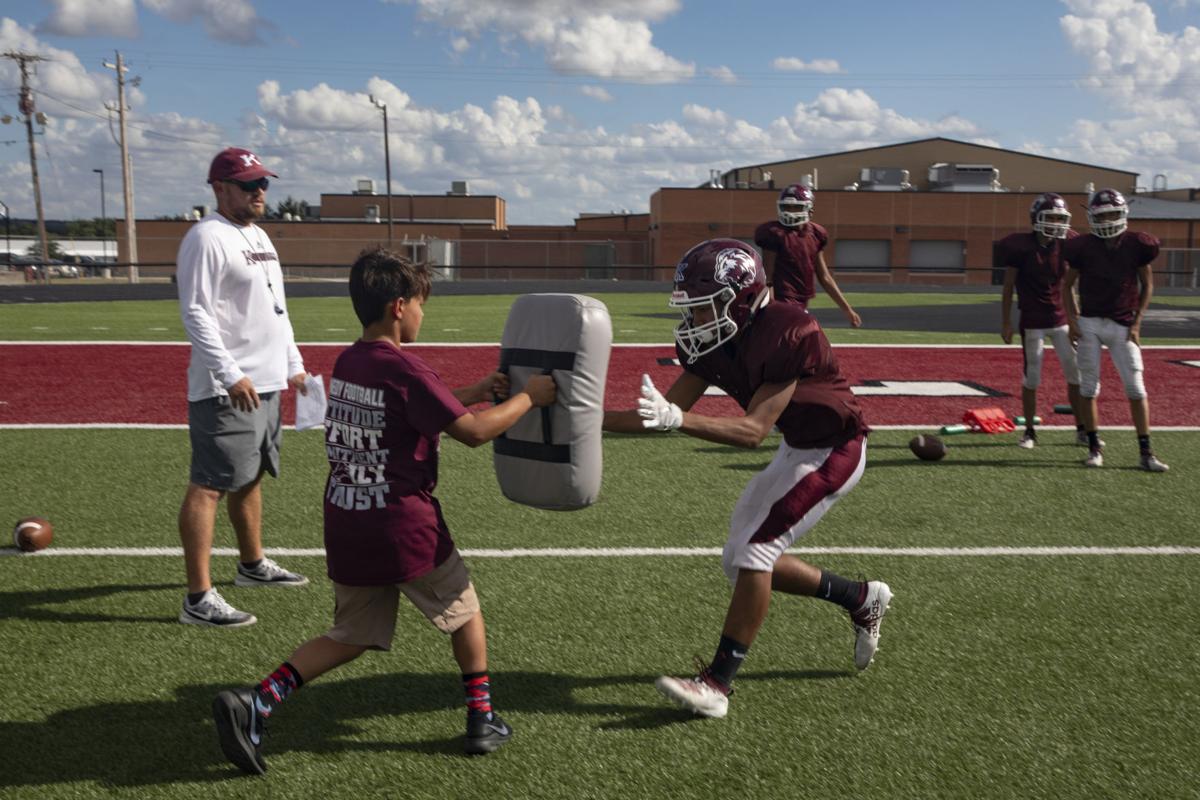 Ty Villanueva runs toward Kain Jurgajtis, (11), and coach Dustin White during practice on Monday at Lion Stadium in Kennedy. 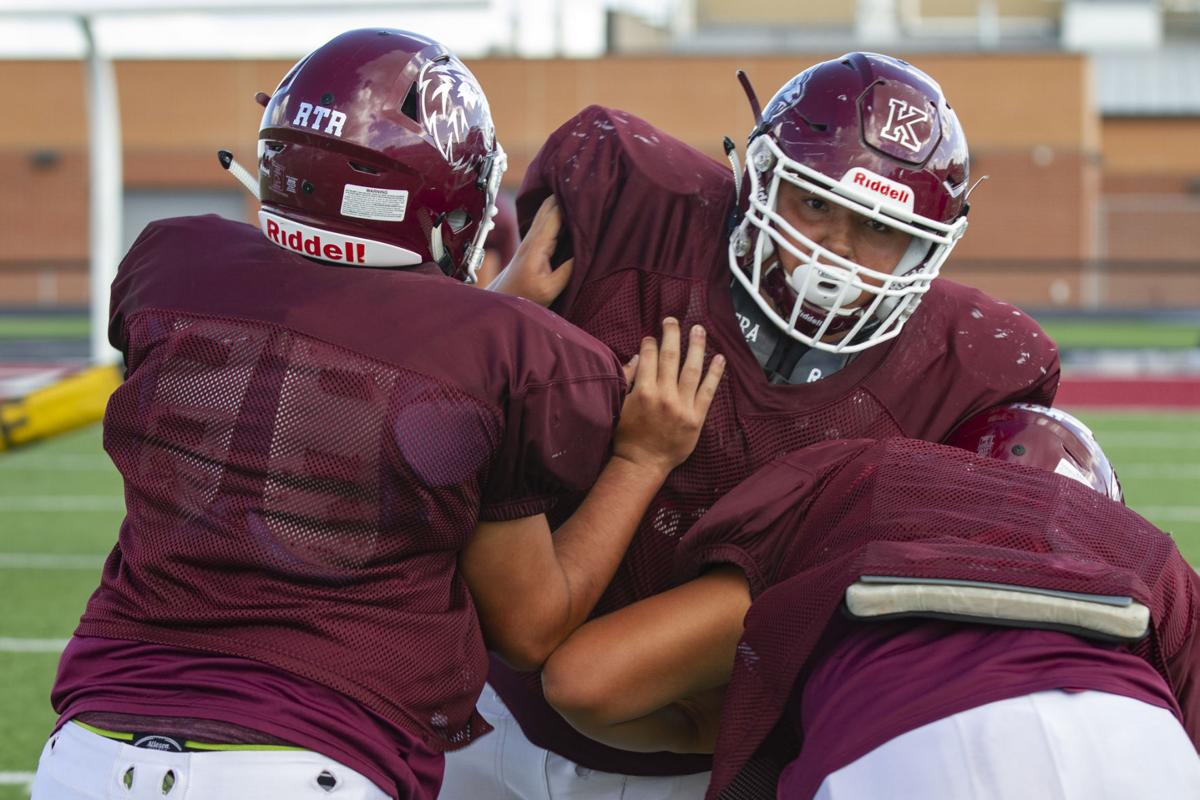 Justin Cownell works on drills during practice on Monday at Lion Stadium in Kennedy.

Ty Villanueva runs toward Kain Jurgajtis, (11), and coach Dustin White during practice on Monday at Lion Stadium in Kennedy.

Justin Cownell works on drills during practice on Monday at Lion Stadium in Kennedy.

KENEDY – Senior Justin Connell did something Friday he hadn’t done since his freshman year of high school.

Connell got to celebrate a win with his Kenedy teammates.

“It was a good feeling,” Connell said. “To win, it’s been such a long time. It was an amazing feeling.”

Kenedy ended a 28-game losing streak with a win over Louie. pic.twitter.com/DrBPYHYbNm

“There have been a lot of tough times,” said senior Oscar Hinojosa. “We fought through it, but it’s been hard just losing. It was good to finally come out with a win.”

The players give much of the credit to first-year head coach Shawn Alvarez.

Alvarez, who grew up in George West, was familiar with Kenedy and put together a staff that includes former Cuero assistant Cameron Murrah.

“Coming from Cuero under coach Reeve, he’s very structured,” Alvarez said. “I learned a lot in a short amount of time. I came in with high expectations – not necessarily football oriented; it was more like a program thing.

The players were tired of losing and embraced the changes instituted by Alvarez and his staff.

Kenedy senior Justin Connell on his first win since his freshman season. pic.twitter.com/kxJFpZeCYX

“It’s been very hard for us,” Connell said. “We’ve been pushing and pushing. Coach Alvarez said mainly just trust us and we’ll trust you and we’re going to change this program.”

Alvarez was determined to keep the focus off the past and was encouraged by what he saw in the Lions’ season-opening loss to Karnes City.

“We tried to stay away from that,” he said. “We haven’t really focused on it at all. But we do have weekly themes. The theme last week was trusting the process. We felt like something we weren’t doing was playing the entire game and we did that against Karnes City and good things came out of that game. We said, ‘Hey let’s trust it,’ and we were able to do that against Louise.”

Kenedy will travel to Pettus on Friday with a chance to win consecutive games for the first time since 2014.

“The team is ready,” Hinojosa said. “We got our first win. We’ll build off of this. We have to stay humble and get our next win.”

Another win would be gratifying for the Lions, but they have bigger goals.

“We talk about being here and being on time every day and they’re doing that,” Alvarez said. “Our film study Saturday morning was outstanding as far as attendance and concentration. Owning up to what we did wrong and what we did right and how we can build off of it. Let’s focus on having an edge and getting better.”

Michael Waldie got his first win at Gonzales. The Apaches defeated Austin Crockett 14-0.

Coaches may send cumulative season statistics for the Advocate's area leaders. Statistics including rushing, passing, receiving, scoring and interceptions should be sent to mforman@vicad.com.