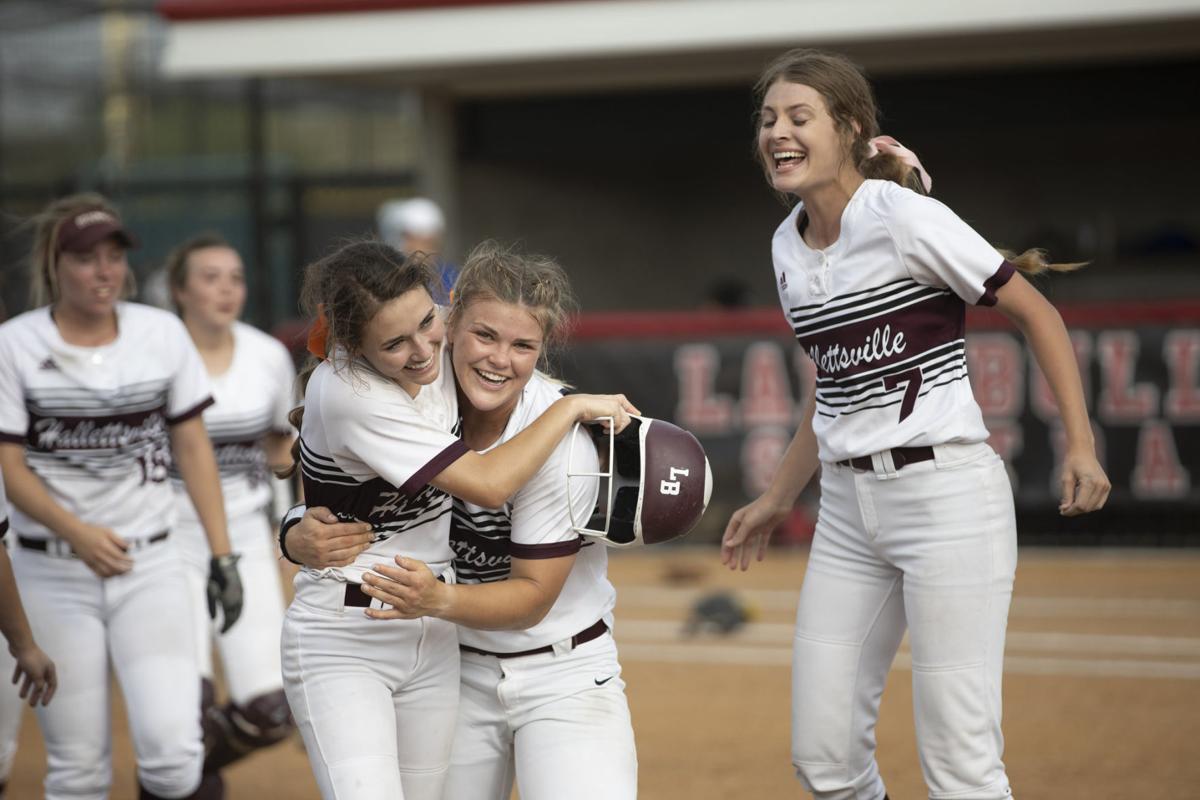 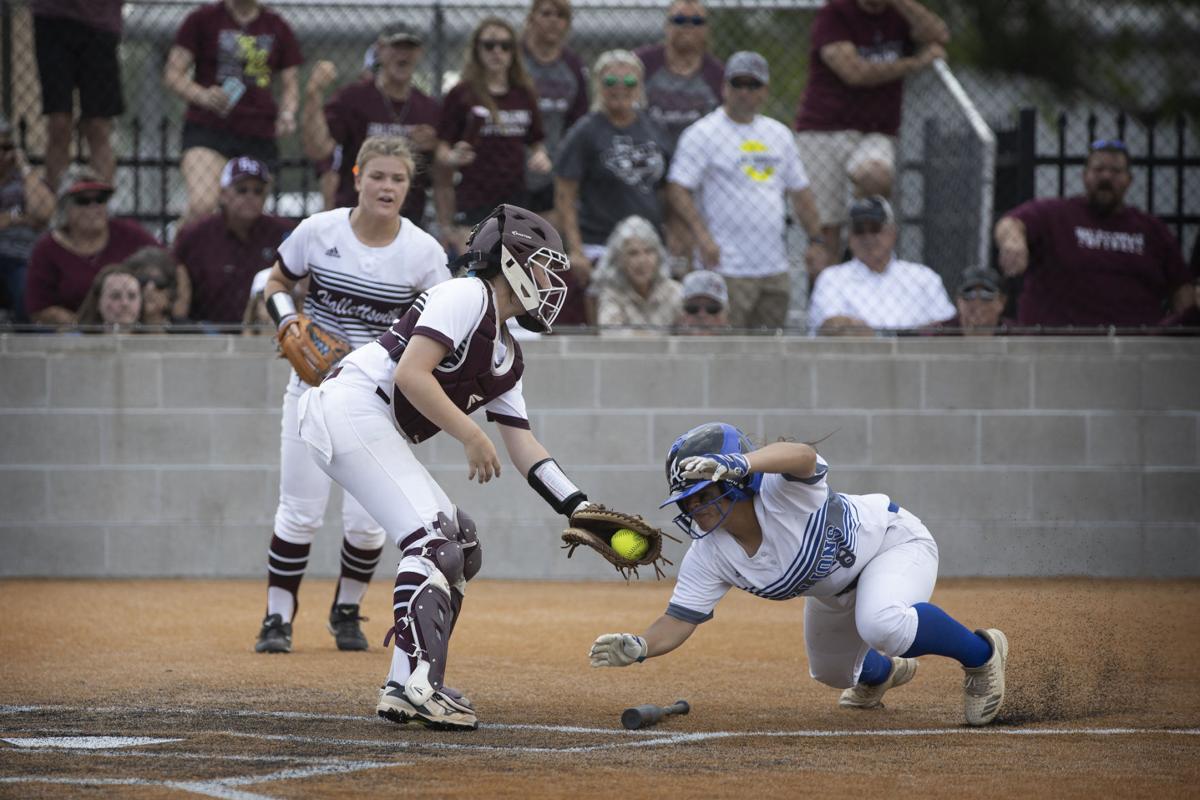 Hallettsville catcher Julie Michalcik tags out Santa Gertrudis's Yadira Lopez during Game 3 of the Class 3A regional semifinals on Saturday at Three Rivers High School. The Lady Brahmas extended their season with back to back wins.

Hallettsville catcher Julie Michalcik tags out Santa Gertrudis's Yadira Lopez during Game 3 of the Class 3A regional semifinals on Saturday at Three Rivers High School. The Lady Brahmas extended their season with back to back wins.

THREE RIVERS – Hallettsville’s Rylee Trlicek couldn’t have asked for a better birthday present and Kenzi Lange couldn’t have scripted a better day at the plate against Santa Gertrudis Academy on Saturday.

Trlicek, who was celebrating her 19th birthday, pitched through 14 innings and Lange finished with five total hits, including two home runs in Game 2, the game-tying two-run single and the game-winning RBI single in Game 3 to give Hallettsville a 9-8 regional semifinal win in eight innings over the Lady Lions at Three Rivers High School.

The win improved No. 1 Hallettsville to 33-1 on the season and sent the Lady Brahmas to the Region IV-3A final for the first time since 2016 to play Banquete, a 6-5 winner over Schulenburg.

“It means so much,” Lange said. “The last three years have been really rough, but every year we take it and try to make things better. We were finally able to do it.”

No. 3 Santa Gertrudis Academy (32-3) continued to walk Trlicek in the series, but Lange didn’t mind.

“Honestly, it kind of lit me up,” Lange said. “It’s great they walked Rylee because I get a runner on base, but it fueled my fire. I’m a small girl and I’m not going to hit a lot of home runs, but it was a great feeling to get hits when they walked her.”

Here’s Kenzi Lange after Hallettsville defeated Santa Gertrudis Academy in Game 3. Lange had the game-tying two-run single in the 6th and the game-winning RBI single in the 8th. @kenzilange @hbteams pic.twitter.com/8XN7vCPlOY

Lange made the Lady Lions pay by hitting her two home runs to lift the Lady Brahmas to a 15-0 win in Game 2.

Lange’s heroics in Game 3 gave Hallettsville its first series win over the Lady Lions since 2015.

“I wasn’t looking to do much,” Lange said. “I wanted to do whatever I could to get on base so the girls behind me could bring me in. It’s great when you have a good day at the plate.”

Trlicek pitched both games for Hallettsville and finished with five shutout innings in Game 2 and four strikeouts in Game 3 to keep the Lady Brahmas in the game.

Trlicek said wining the series was the best birthday present ever.

“It’s awesome,” Trlicek said. “We made it to the regional finals my freshman year, and to do it again as a senior is a great feeling – especially against a really good team. They’re an awesome opponent to play, and they give us competition that’s only going to help us.”

The Lady Brahmas finished with 22 hits in the final two games of the series, which included a two-run home run by Emma Grahmann in the first inning of Game 3.

It was Grahmann’s fifth home run of the season.

“It’s amazing because we all want it this year,” Grahmann said. “Last year we had nerves, but this year we were a lot more confident. They were a good opponent, and it’s a big stepping stone to get past.”

Hallettsville sophomore Emma Grahmann connected on a two-run home run, her fifth of the season, in the first inning of Game 3. Here’s her take on the series win. @Emma_Grahmann @hbteams pic.twitter.com/65QR8be3eK

Hallettsville’s offense erupted for nine runs in the sixth inning to seal Game 2.

Hannah Bludau and Courtney Woytek each had two RBIs in the inning.

Game 3 came down to the wire after both teams exchanged runs late.

The Lady Lions overcame Hallettsville’s 4-0 lead by scoring two runs in the third inning and three in the sixth to take the lead.

But Trlicek settled down to keep things close, and Lange did the rest to secure the series win.

“To get over this hump, words can’t describe it,” said Hallettsville coach Mike Mikeska. “I told the girls to push them to three and see what happens. They responded, and they played their hearts out.”

Mikeska said the team will celebrate its win this weekend but will quickly turn its attention to the Lady Bulldogs when they meet with a chance to advance to the UIL Class 3A state tournament.

“It’s been a while since we’ve been here,” Mikeska said. “We’ll see what happens, but right now, we’re going to enjoy this one. It was an awesome display, and these girls battled and battled. This is good softball.”

Kenzi Lange @kenzilange sends Hallettsville to the Region IV-3A final to play Banquete. Lady Brahmas finally get past Santa Gertrudis Academy for the first time since 2015 with a 9-8 win in eight innings. @TXPrepSoftball @hbteams pic.twitter.com/JJKCyXqXOB