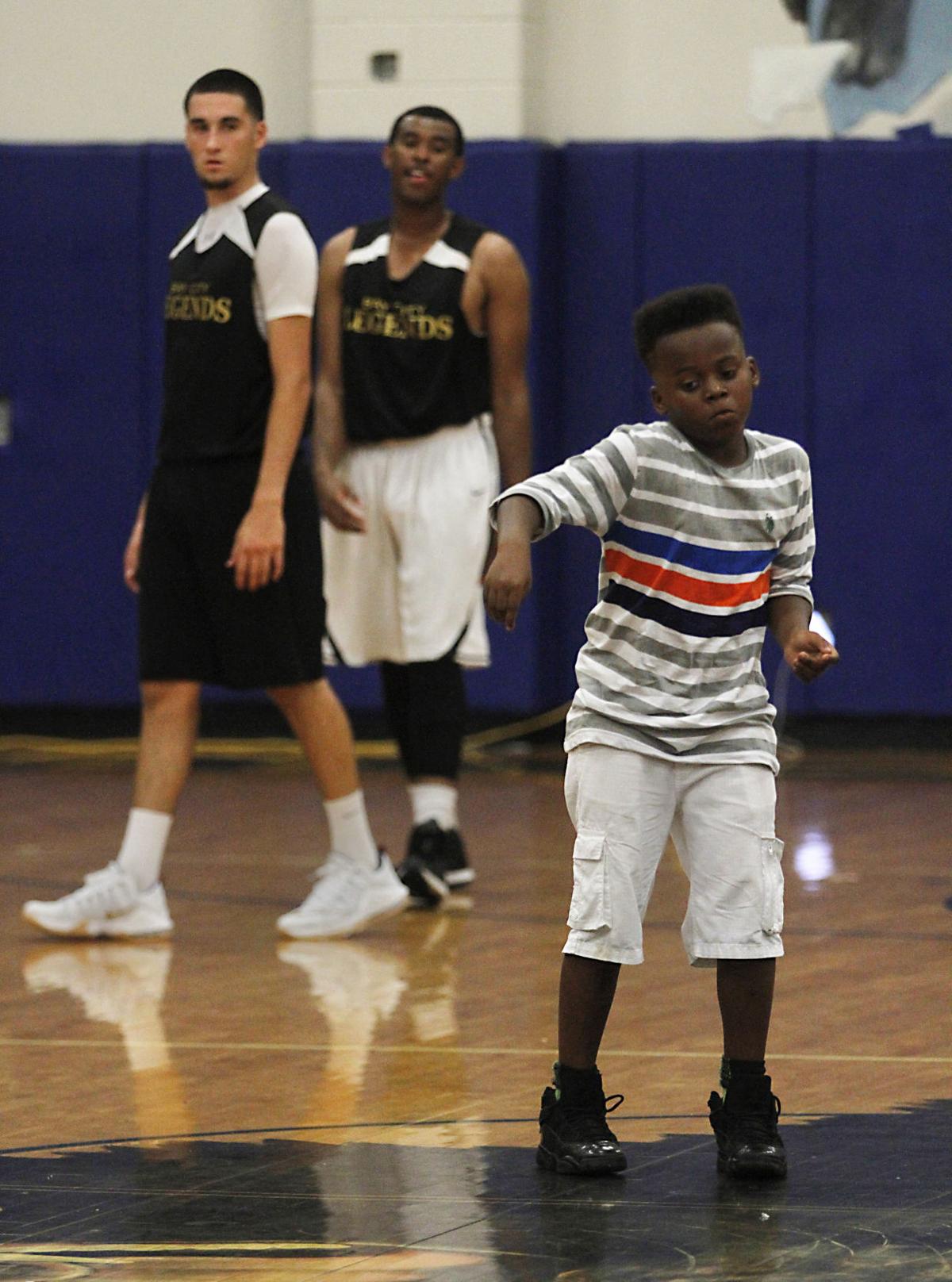 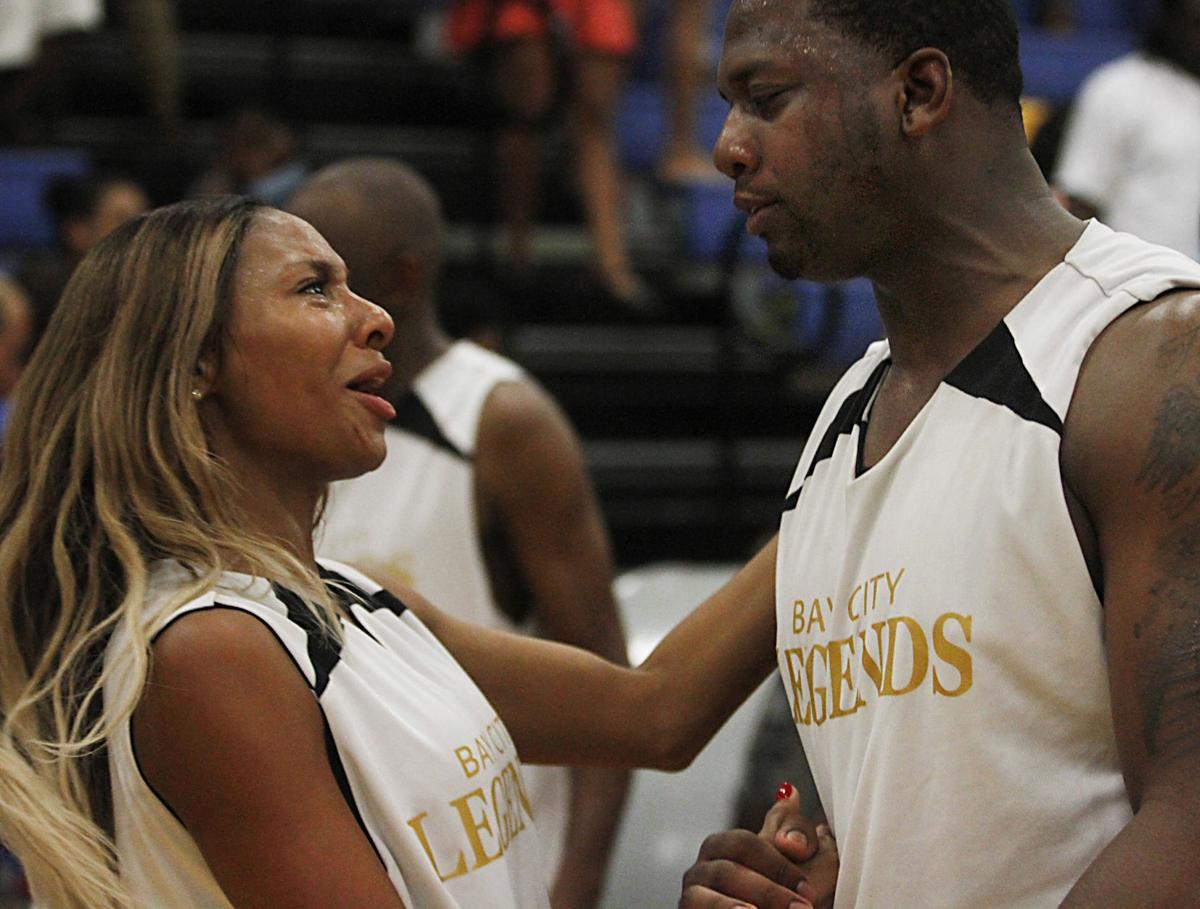 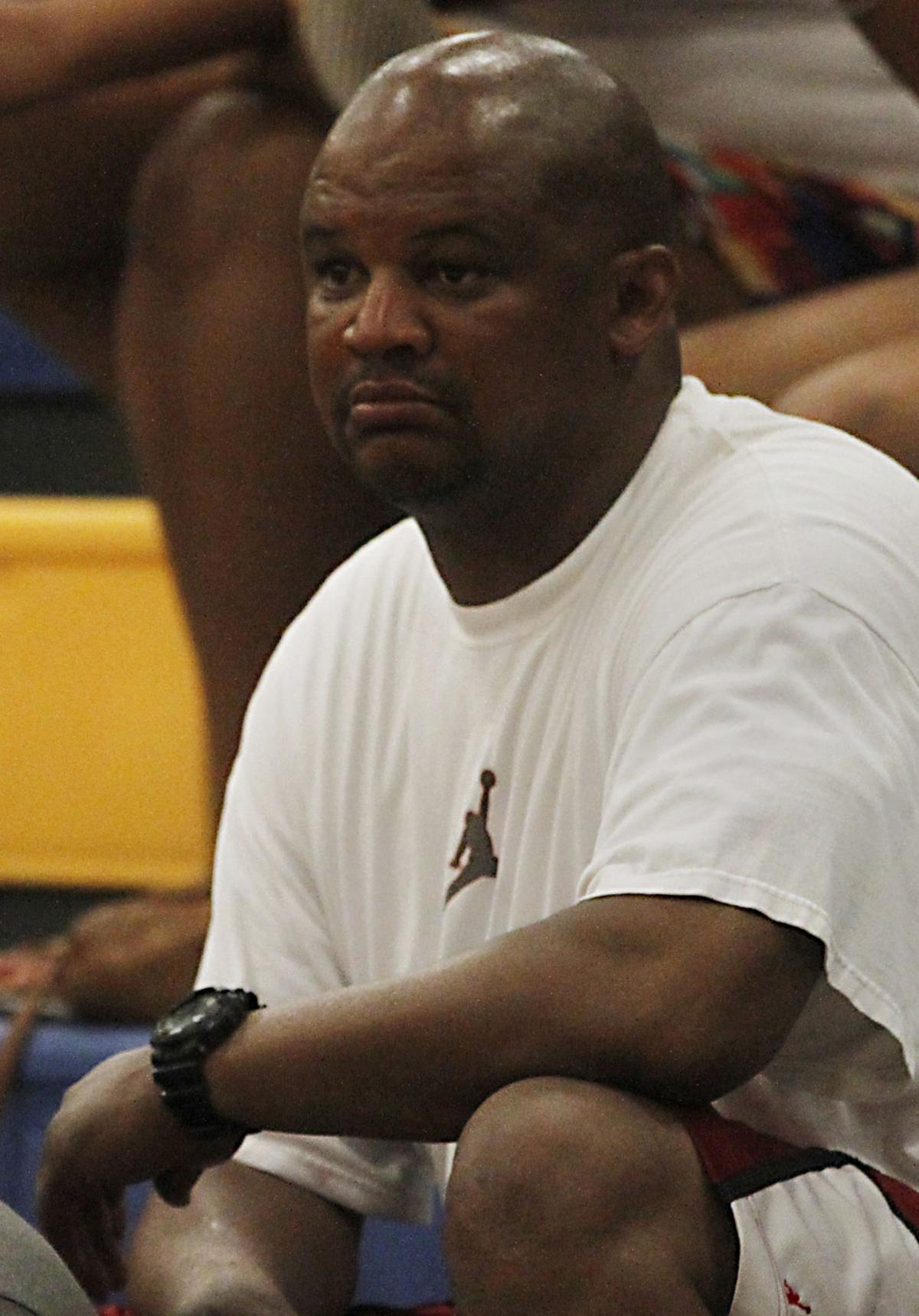 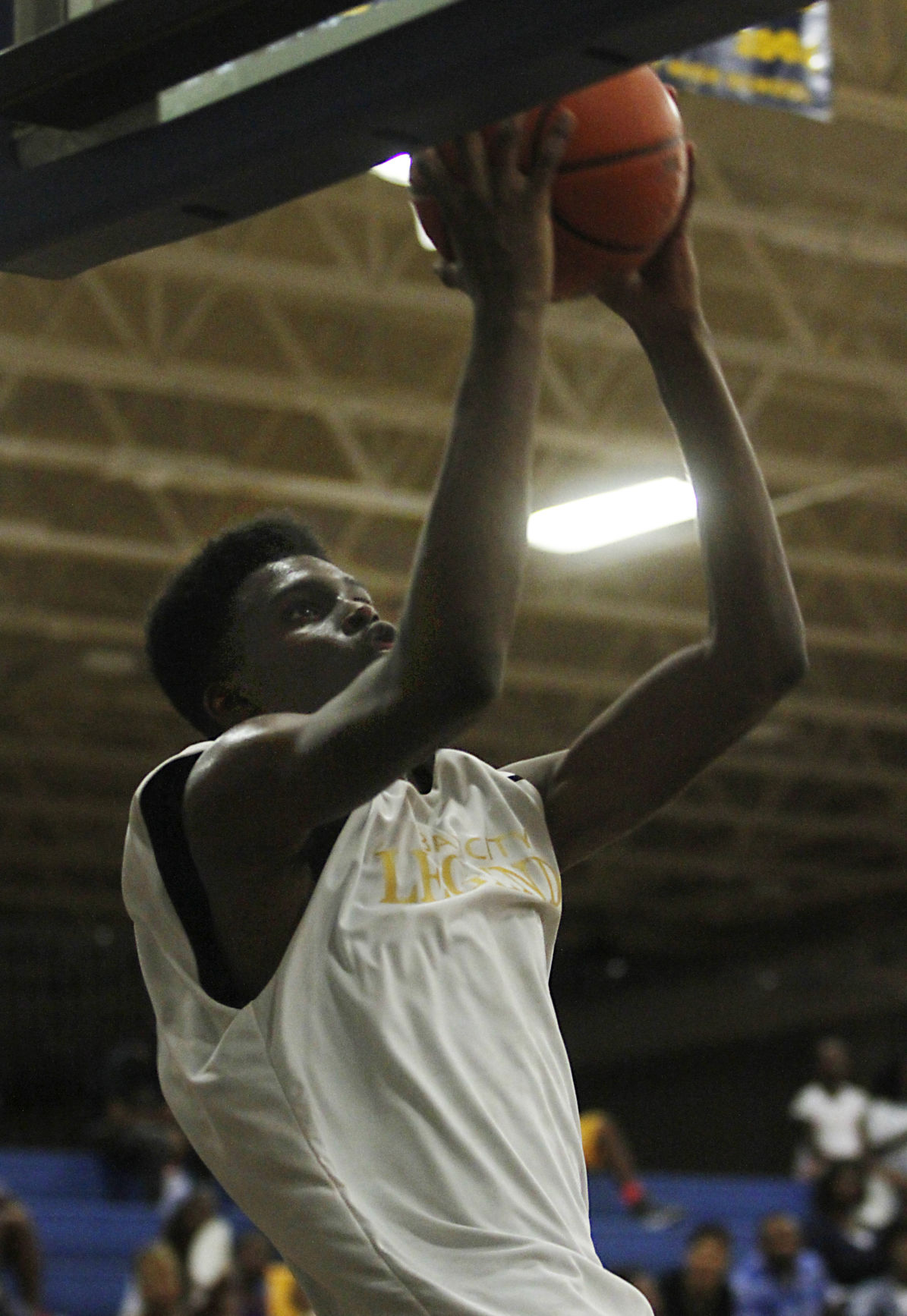 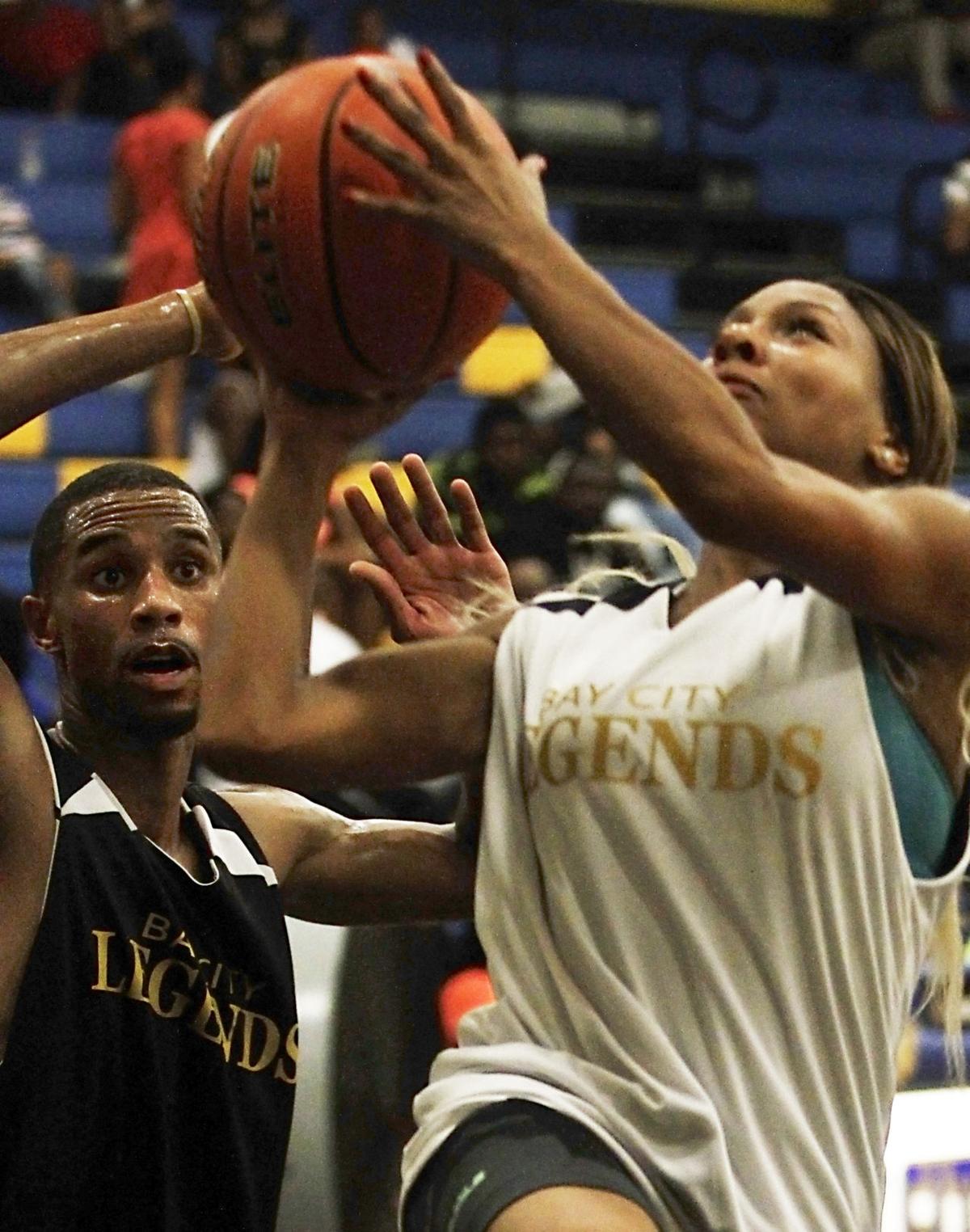 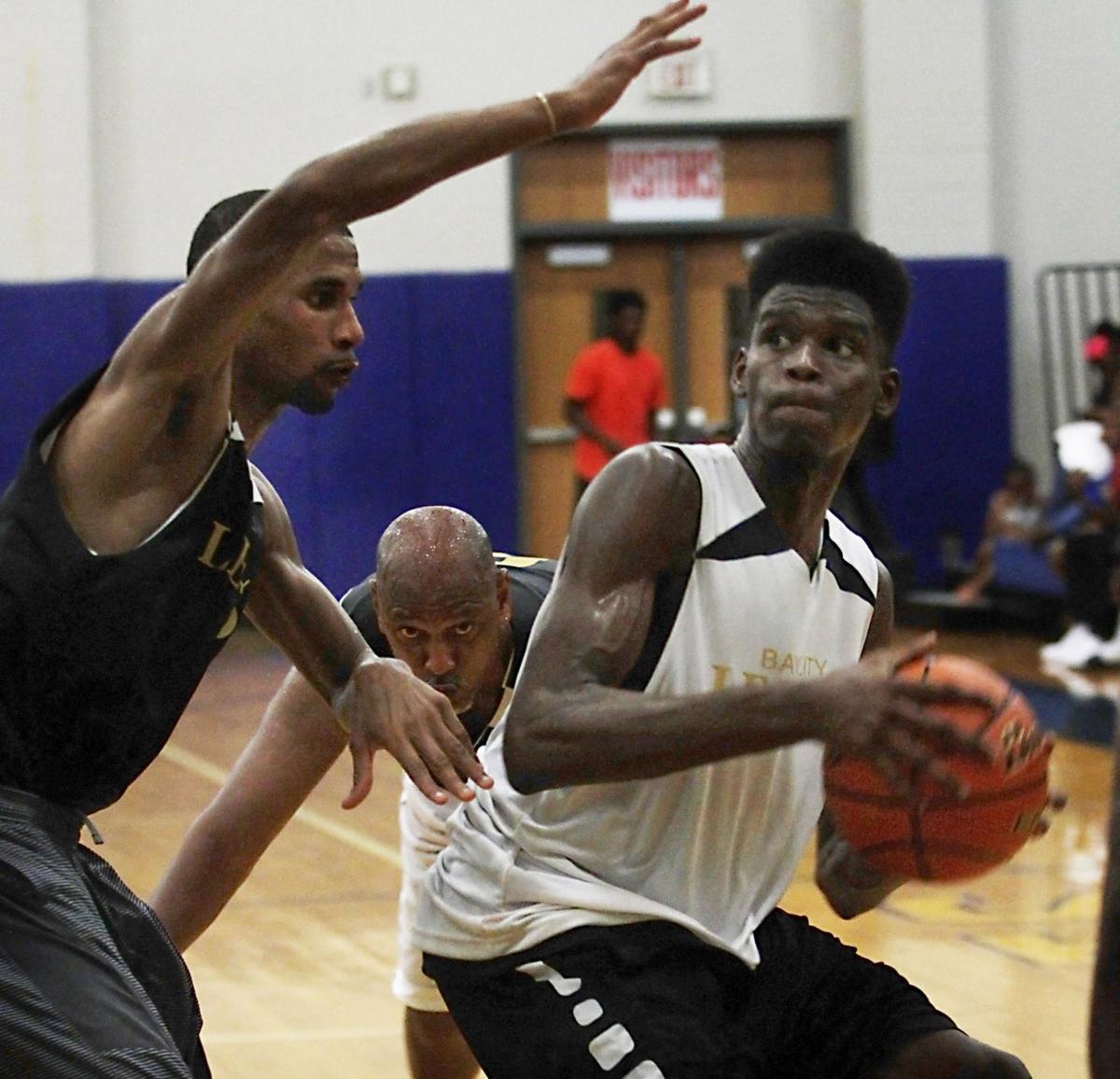 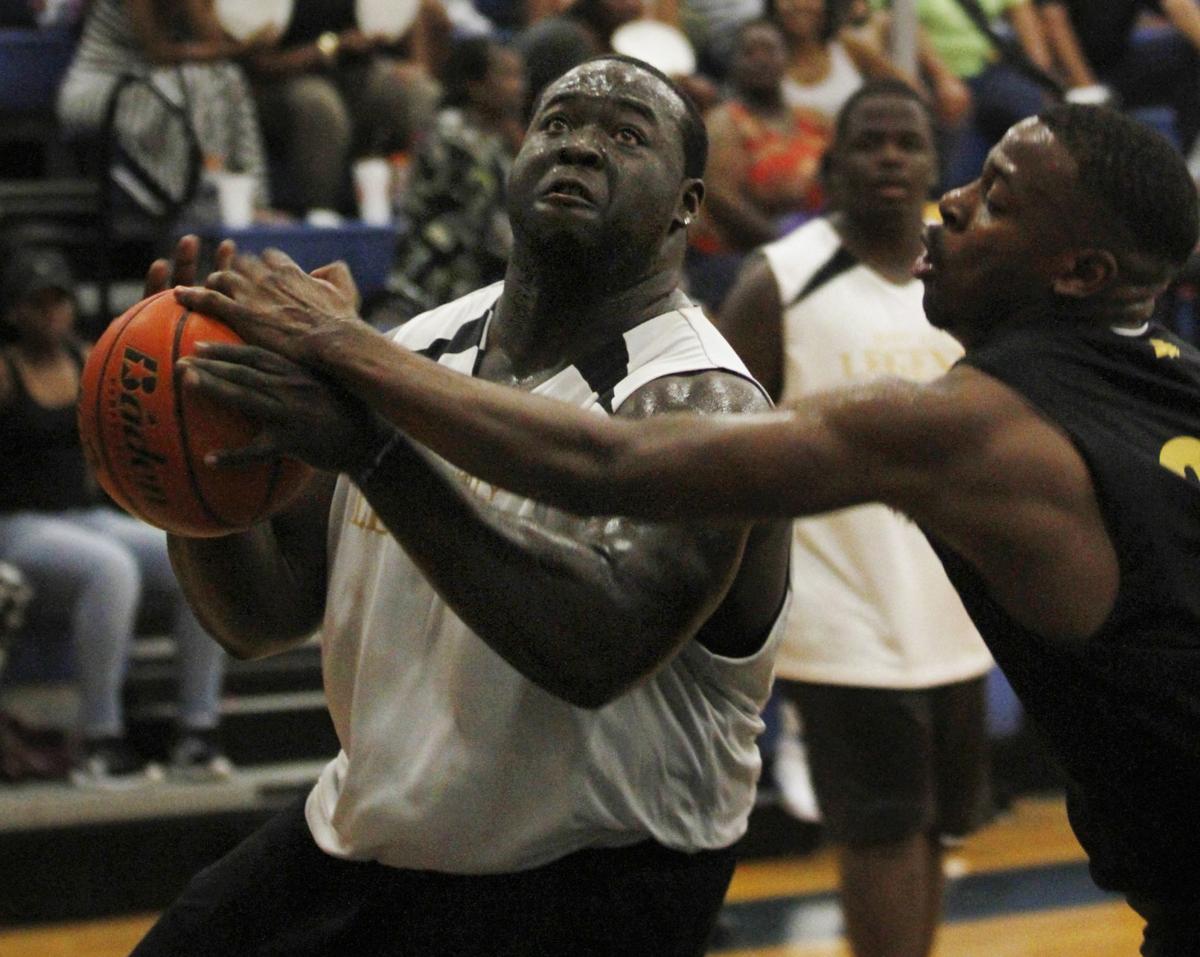 Mike Smith, left, struggles with Tevin Battle, right, for control over the ball during the Bay City Alumni Basketball game at the Bay City High School Gym on Saturday, June 20, 2015. The game raised over $3,000.

Mike Smith, left, struggles with Tevin Battle, right, for control over the ball during the Bay City Alumni Basketball game at the Bay City High School Gym on Saturday, June 20, 2015. The game raised over $3,000.

But Smith wasn't about to get on the court for the Bay City Legends basketball game.

"I just watch my son," Smith said of Nicholas Smith, a sophomore in high school in Louisville, where LaBradford resides.

Player played basketball at Baylor and professionally in Europe and in the WNBA.

She put together the game in an effort to help rekindle the school's once-powerful athletic program.

Smith - known as "Moose" by his Bay City classmates - was a sophomore when the Blackcats won the 1984-85 state basketball championship.

He played at Louisville and was a first-round pick of the Washington Bullets in 1991.

He played four seasons in the NBA before playing in Europe.

But he is best remembered for the game he had against Jordan.

"It was just one of those nights," Smith said. "I got into a zone. It just so happened it was against Chicago."

Smith gives much of the credit for his success in basketball to former Bay City coach Eddie Nelson.

"He knew how to get the best out of you," Smith said. "He knew how to push you. That was instilled in all of us and helped us when we left high school."

The feeling was mutual for the players, including Carolyn Harris, a 2001 graduate who played for Sherby Wilkerson and was the lone female to play in the game.

The Black team, led by MVP and 2014 graduate Joshua Perez, captured a 57-46 win over the White team.

The paid crowd of 430 helped provide a college scholarship, and benefited the Women's Crisis Center and the Shannon Austin Medical Fund.

The biggest beneficiary could be the Bay City athletic program, which has struggled in recent years.

Shaun Rutherford graduated in 2008. He played football at Texas State and professionally in Europe.

Rutherford went to work Monday as the director of sports performance at Athletic Republic in New Braunfels, but keeps in touch with his alma mater.

"I spoke with coach Florez at the Andrew Smith Jr. Football Camp and I was telling him that Bay City really needs something like this to lift up these younger kids and show them what Bay City is all about," Rutherford said of new athletic director and head football coach Lupe Florez. "To get back on the winning track in all sports."

Ivan Pettit graduated in 1982 and played basketball at Rice.

He enjoyed matching up against the younger players.

"This is absolutely incredible," said Pettit, who works for Walmart in addition to owning a coffee business in Houston. "I did it for the fans and the people who were there for us. I want the kids to have something to look forward to. This should get things back going and people coming out to the games, including myself. I need to come back more."

Stephen Woods graduated in 1996 and played at SMU.

He is currently the head basketball coach at Aldine MacArthur and enjoyed getting together with his former teammates.

"This is fun," Woods said. "Seeing the guys I haven't seen in years. The camaraderie and doing something for the community. Showing them what came through Bay City. We had a lot of winning teams. We need to bring that back to this community."

Player hopes to makes the event an annual affair.

She plans to begin working on next year's game when she returns from her upcoming season in Poland.

"For it to be that hot in the gym and everybody stayed, I'm more than pleased," she said. "We've already heard from people who want to play next year."

DaMarcus Griggs is glad he made the trip from Angleton, where he works a juvenile supervision officer.

Griggs played football at Texas State after graduating from Bay City in 2006 and wants others from his alma mater to have the same opportunity.

"I think this is definitely what we need," Griggs said. "You not only have former players - it brings the whole community out as well. It will be a good thing. Hopefully, we'll get this thing started back to Bay City ball, which it was known for before."

Mike Forman is a sports writer for the Victoria Advocate. Contact him at 361-580-6588 or mforman@vicad.com.

Legends of a lifetime