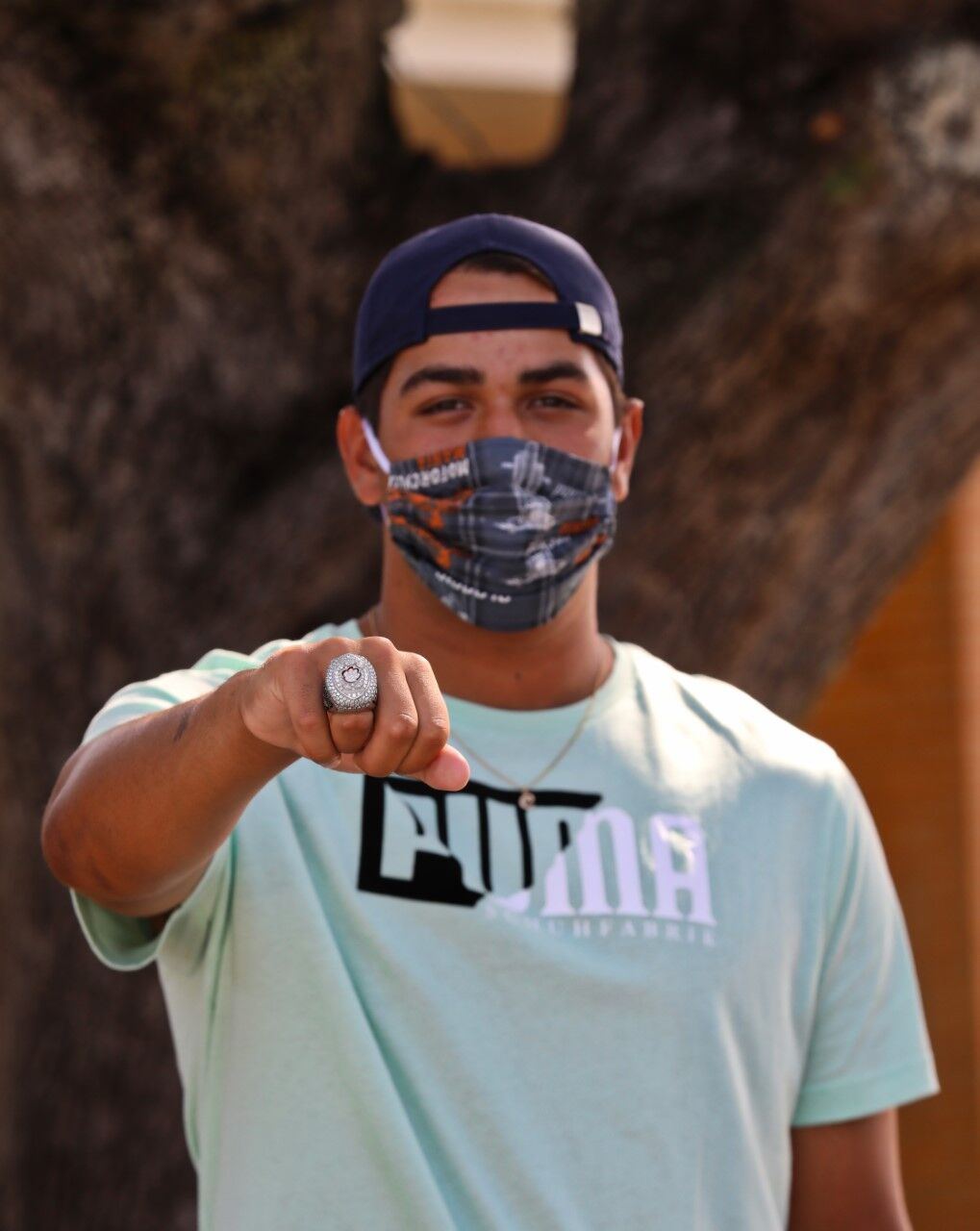 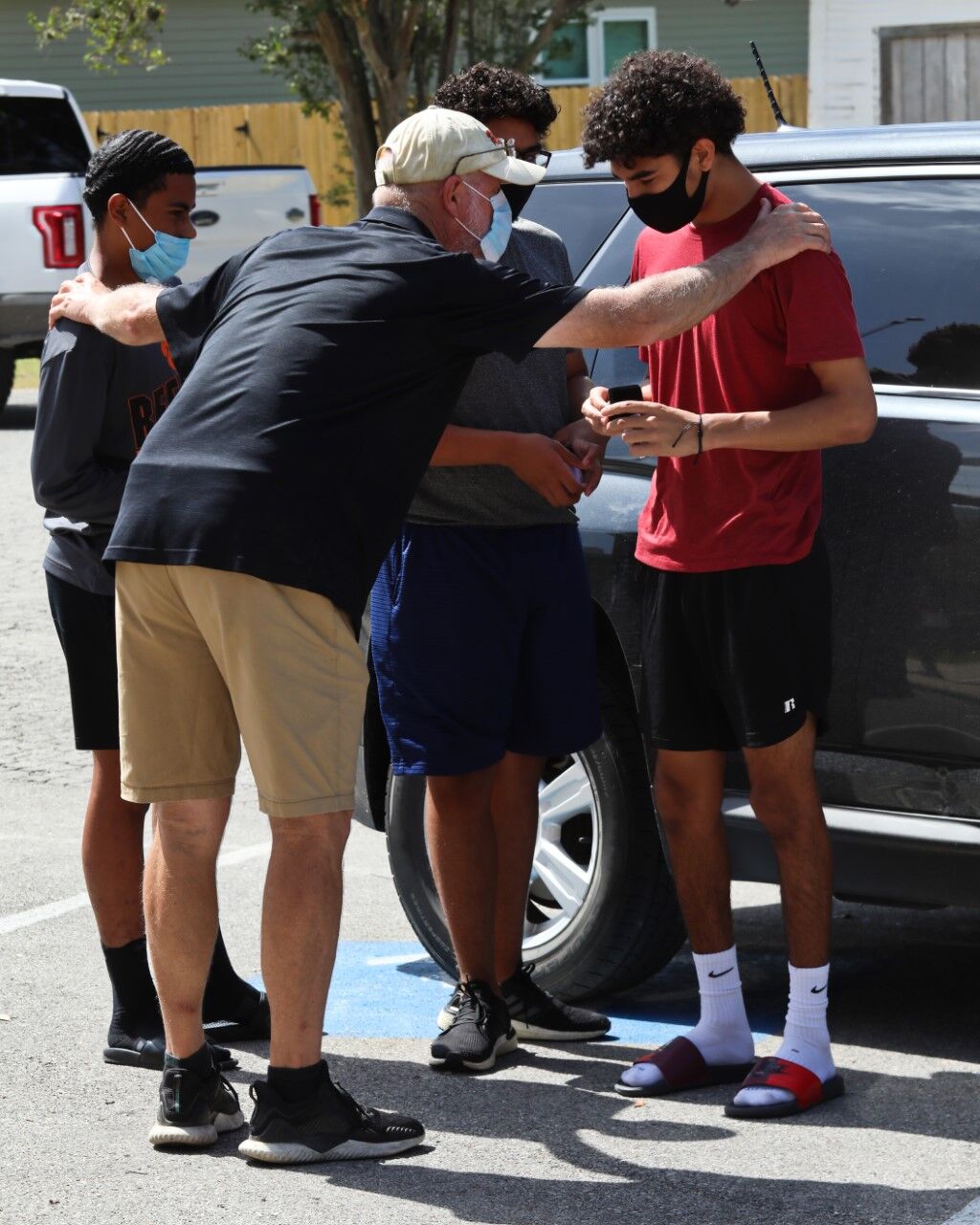 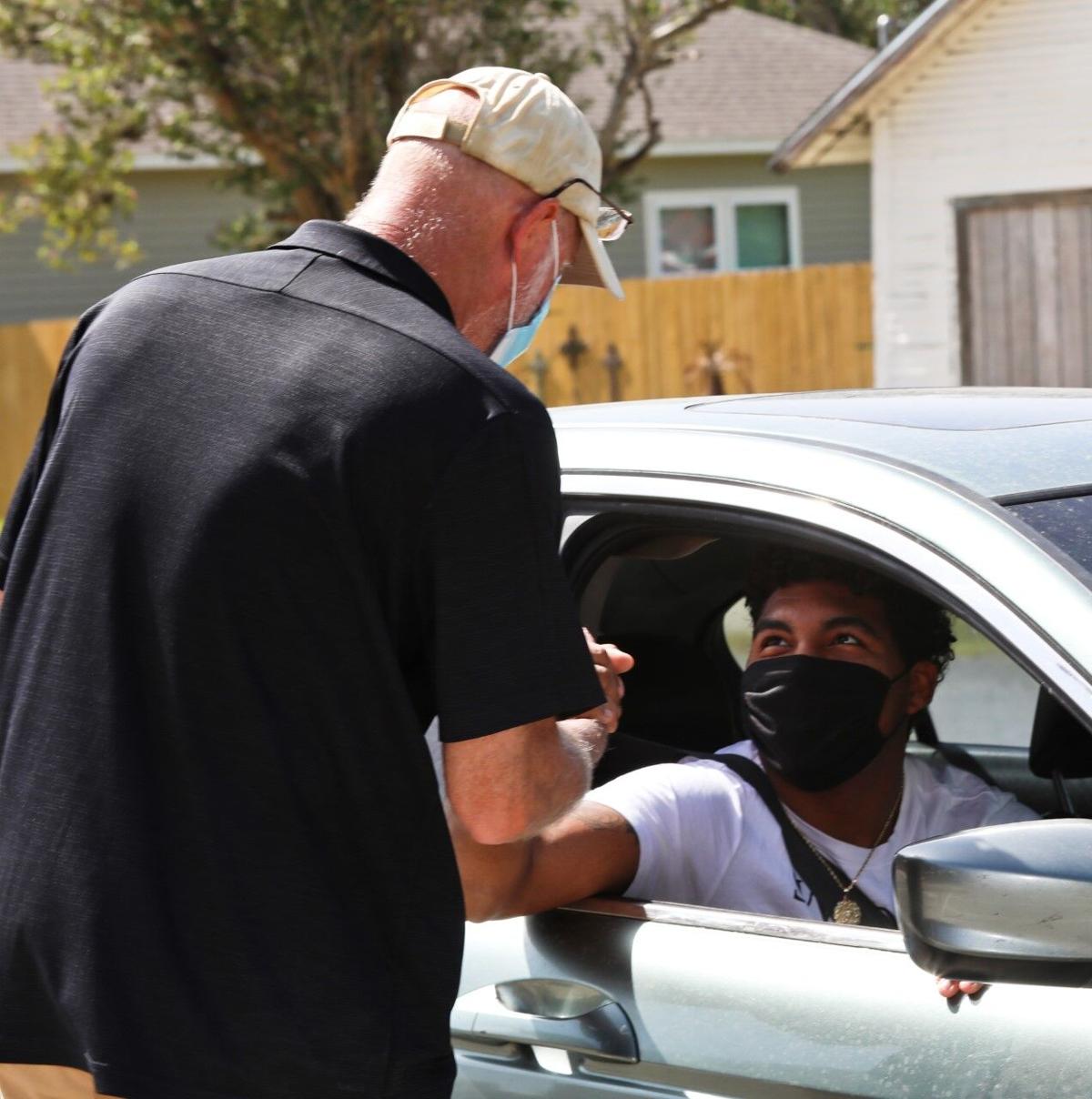 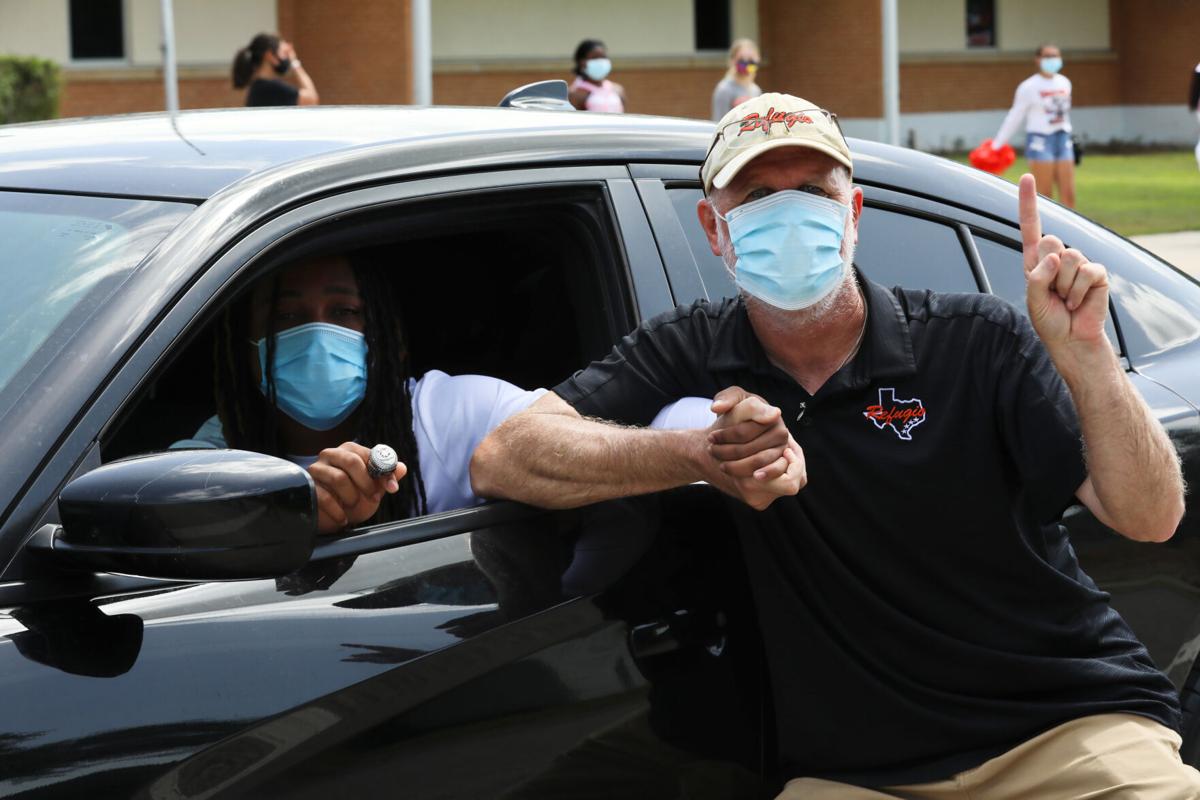 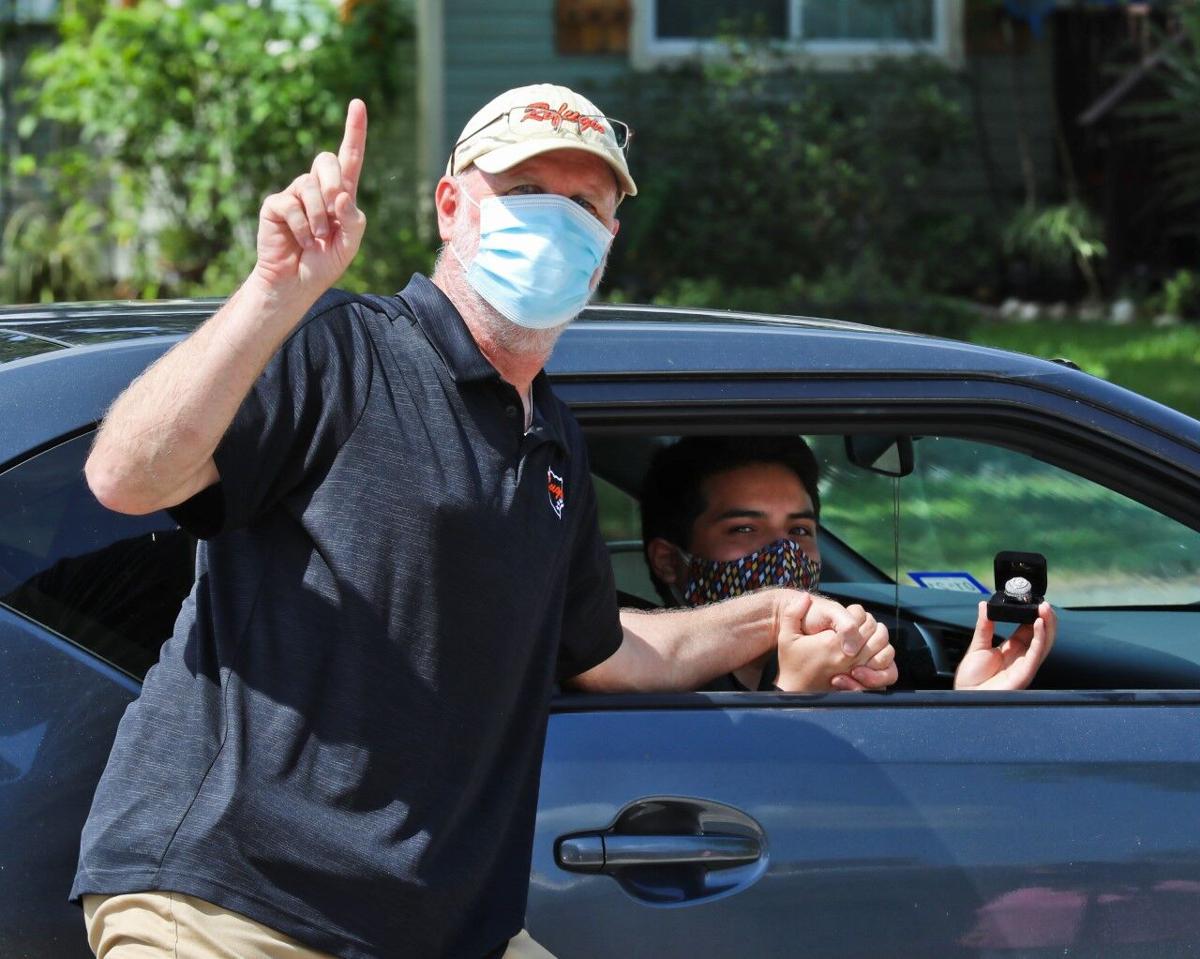 REFUGIO – Refugio coach Jason Herring envisioned standing in the high school gym sometime in March or April greeting each of his players and presenting them with their state championship ring.

Instead, Herring and his assistant coaches were out in front of the high school on a brutally hot Saturday morning in July waiting for players to drive by and pick up their ring.

“This is the weirdest ring ceremony I’ve ever had,” Herring said.

But Herring and his staff weren’t about to let the COVID-19 pandemic spoil a 16-0 season that ended at AT&T Stadium in Arlington with a Class 2A, Division I state championship.

“With the COVID, our whole world has kind of changed, so it’s part of it and it doesn’t take away from it,” Herring said. “It was so good to see the kids, even though it was a window drop off. I was able to tell them how much I love them and how much I appreciate them for winning the ring. Mostly I got to hand them the ring and see their response, which is why I do these things.”

Quarterback Austin Ochoa was one of the first to claim his ring. Ochoa was the offensive MVP of the Bobcats’ 28-7 win over Post in the state final and will play baseball at UTSA in the upcoming season.

Refugio had to overcome its share of adversity to bring home the school’s fifth state championship.

The Bobcats trailed by 22 points before rallying to defeat Class 2A, Division II champion Mart in the regular season, and overcame deficits in four of their six playoff games.

“We never gave up no matter what the score was, how bad we were playing we just continued to fight,” said lineman Thomas Keyes. “We regrouped at halftime of every single game and we said, ‘We are not going to lose this game.’ It meant that much to us. We weren’t going to lose.”

“It was something special for sure,” added running back/linebacker Ysidro Mascorro. “We weren’t the biggest team – we were nowhere near as big as my freshman year. Honestly, we just never gave up. You could tell from the crazy games we had. But that’s what made this season great. No one put their head down.”

Herring credits the hard work the coaching staff put in, and the players’ willingness to do whatever they were asked to achieve success.

“That’s what makes this so special,” he said. “This bunch of kids on paper may not have wowed people and may not have won the eye test. Honestly, when you include character, heart, work ethic and coachability, and all of that, it’s probably the best team I’ve ever coached. This team just refused to lose.”

“Those things are so hard to win and we’ve been so blessed to win three in nine seasons,” he said. “Even when I opened up the box this morning and saw my ring, it still kind of stunned me.

“I’m mostly happy for the kids, No. 1, my coaches, No. 2, and the community, that we could bring home something that special for the kids that nobody can ever take away from them.”

Herring has no idea what’s in store for the 2020 season, but hopes the Bobcats have the opportunity to defend their title.

“I don’t know the decision, but I feel certain that we’re probably going to delay at least a month and it probably means we’re going to miss preseason and maybe just get district and the playoffs,” he said. “But if we get any football at all, we’ll be thrilled. I just want to play some. After what happened in the spring, I don’t want any kid to have a season taken away. Even if it’s a baby season in some shape or form.”