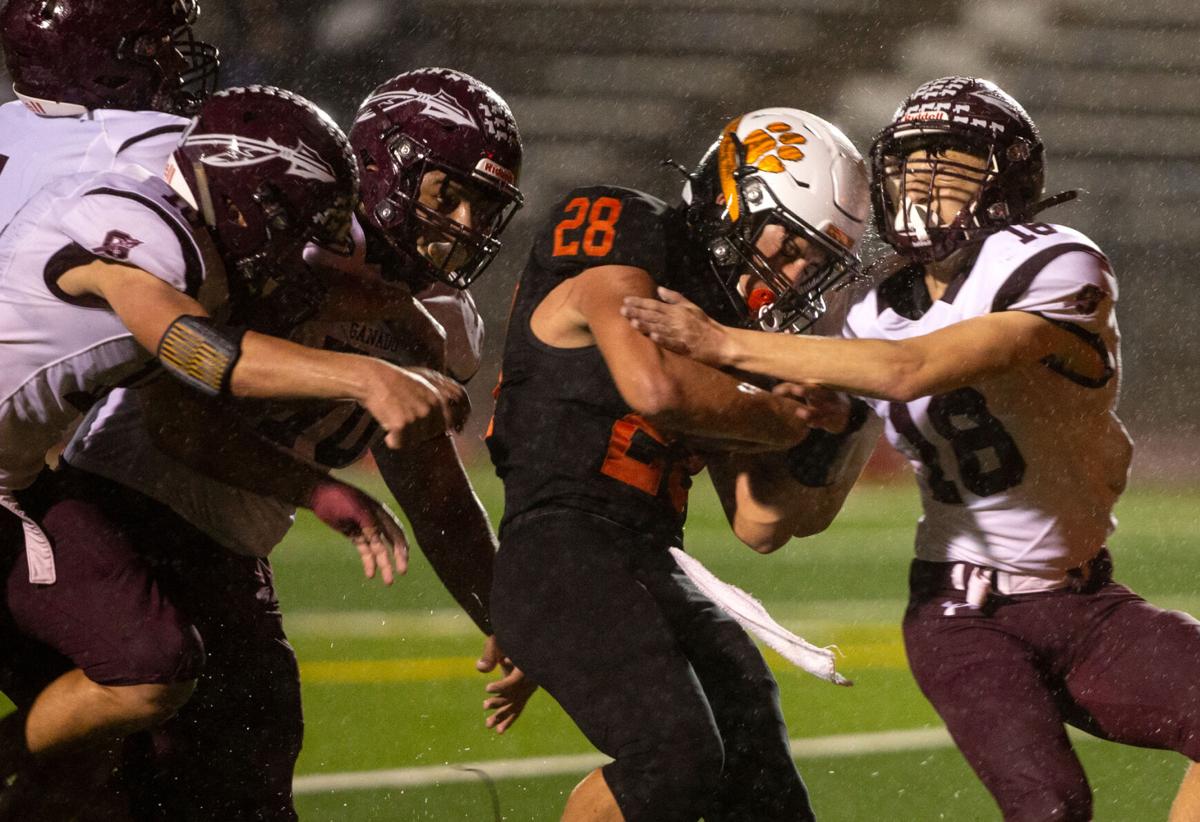 Refugio’s Lukas Meza is held up by a couple of defenders while running the ball during Friday’s Class 2A, Division I regional matchup against Ganado at Victoria Memorial Stadium. 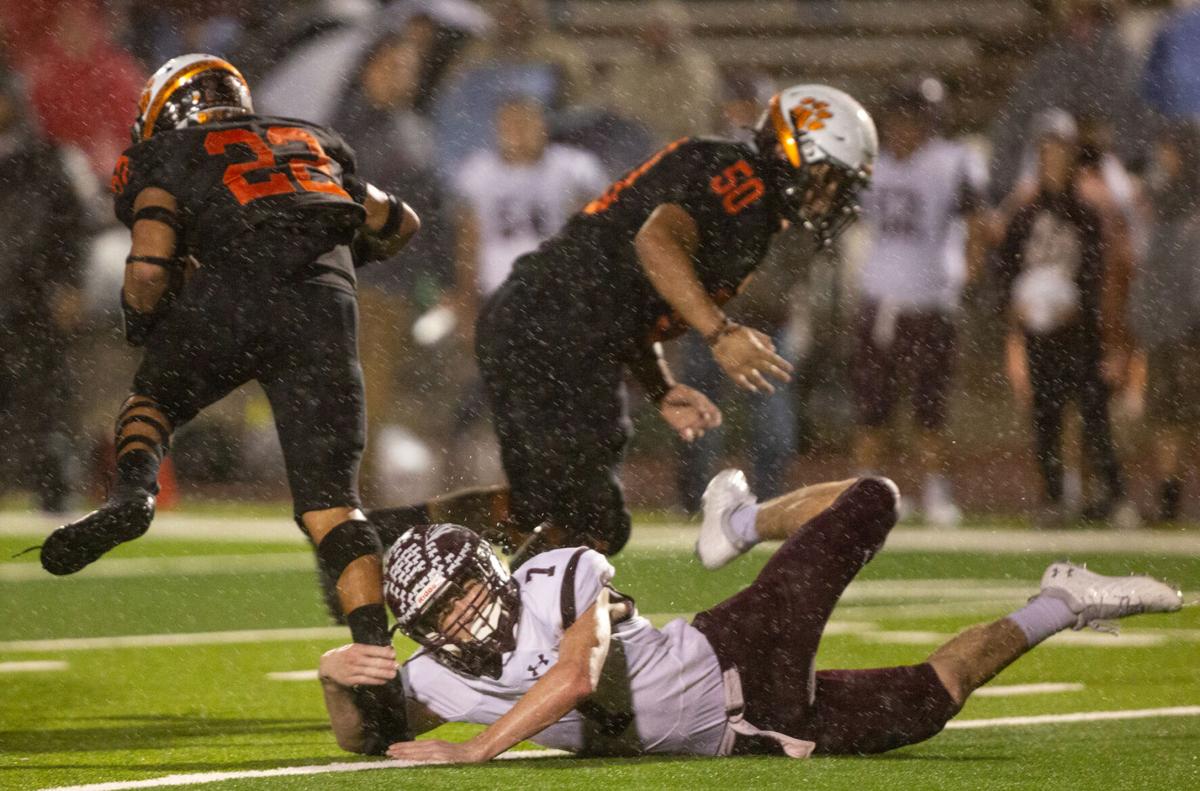 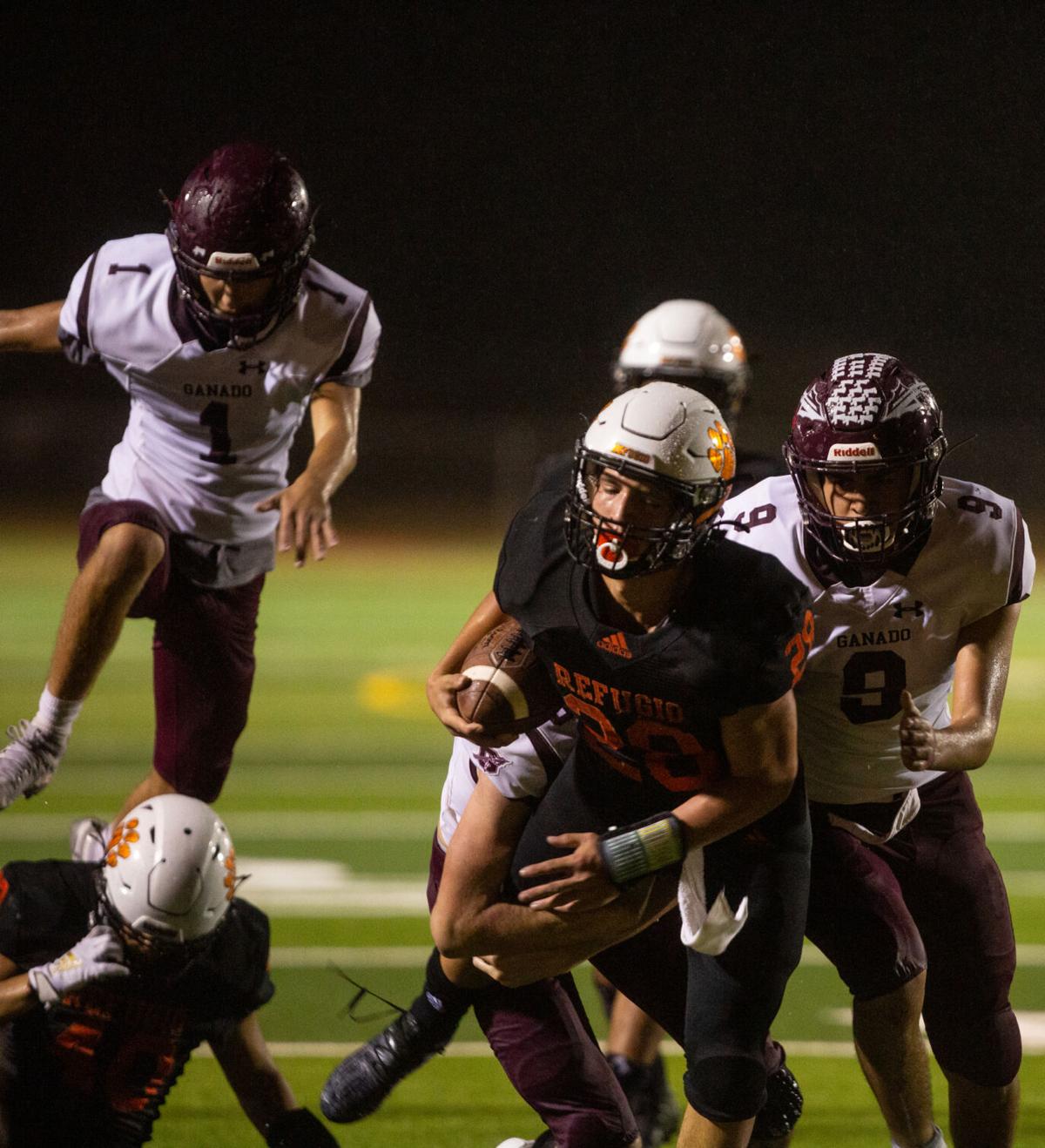 Refugio's Lukas Meza runs the ball during Friday's Class 2A, Division I regional matchup against Ganado at Victoria Memorial Stadium.

Refugio’s Lukas Meza is held up by a couple of defenders while running the ball during Friday’s Class 2A, Division I regional matchup against Ganado at Victoria Memorial Stadium.

Refugio's Lukas Meza runs the ball during Friday's Class 2A, Division I regional matchup against Ganado at Victoria Memorial Stadium.

Refugio had no control over the weather.

But the Bobcats did have a say in how they dealt with the conditions.

“It was rough,” said sophomore running back Eziyah Bland. “But we had to fight through it. Coach (Jason) Herring was telling us all week about the conditions. He was saying that we’ll pull up in any condition and play.”

Refugio overcame a one-hour and 17-minute lightning delay and went on to a 54-2 Class 2A, Division I regional playoff win over Ganado in a constant rain Friday night at Memorial Stadium.

The Bobcats improved to 11-0 and moved into the quarterfinals against Shiner, a 56-0 winner over Mason on Friday night.

Refugio turned to its running game, rushing for 384 yards and producing 23 of its 25 first downs on the ground.

“Our offensive line was perfect,” said Bland, who scored on runs of 30 and 11 yards and returned the opening kickoff of the second half 62 yards for a touchdown. “They were pinpoint on everything. I was congratulating them, and they were congratulating me on every run.”

“I think we did pretty well,” said junior offensive lineman Michael Rocha. “It was a little slippery, but overall we had good pad level. We fired off the ball and we did our job.”

“I’m real pleased up front,” Herring added. “Back in the Freer game around 3-4 weeks ago, I felt like our offensive line was kind of gelling, and that’s why I hated to have those 21 days off. I saw it last week when we knocked the rust off, and tonight we started from scratch.”

Ganado managed only 77 yards of offense and turned the ball over three times, including a 7-yard interception return for a touchdown by Zavien Wills.

“I just saw Nathan (Meza) going in,” Wills said of the interception. “As soon as the ball came out of his hands, I was like ‘I know I’ve got this.’”

Ganado (6-5) endured a blow on its final possession of the first quarter when starting quarterback Kyle Bures-Guerrero suffered a foot injury and was unable to return to the game.

The Indians’ lone score came when Josiah Sterling picked up an errant extra-point snap and returned it for two points.

“They’re very good at what they do,” said Ganado coach Brent Bennett. “Coach Herring’s had that program rolling for a while. I’m very impressed with what they put on the field tonight.”

Refugio threw only five passes, including a flea-flicker for a 56-yard touchdown from Caleb Hesseltine to Kelley.

But the Bobcats were content to run the ball and rely on their defense.

“The defense has been playing great all-year long,” Herring said. “They’ve been lights out all-year long. I thought our offensive line played its best game of the year and our all our running backs ran the ball well. I’m real pleased.”