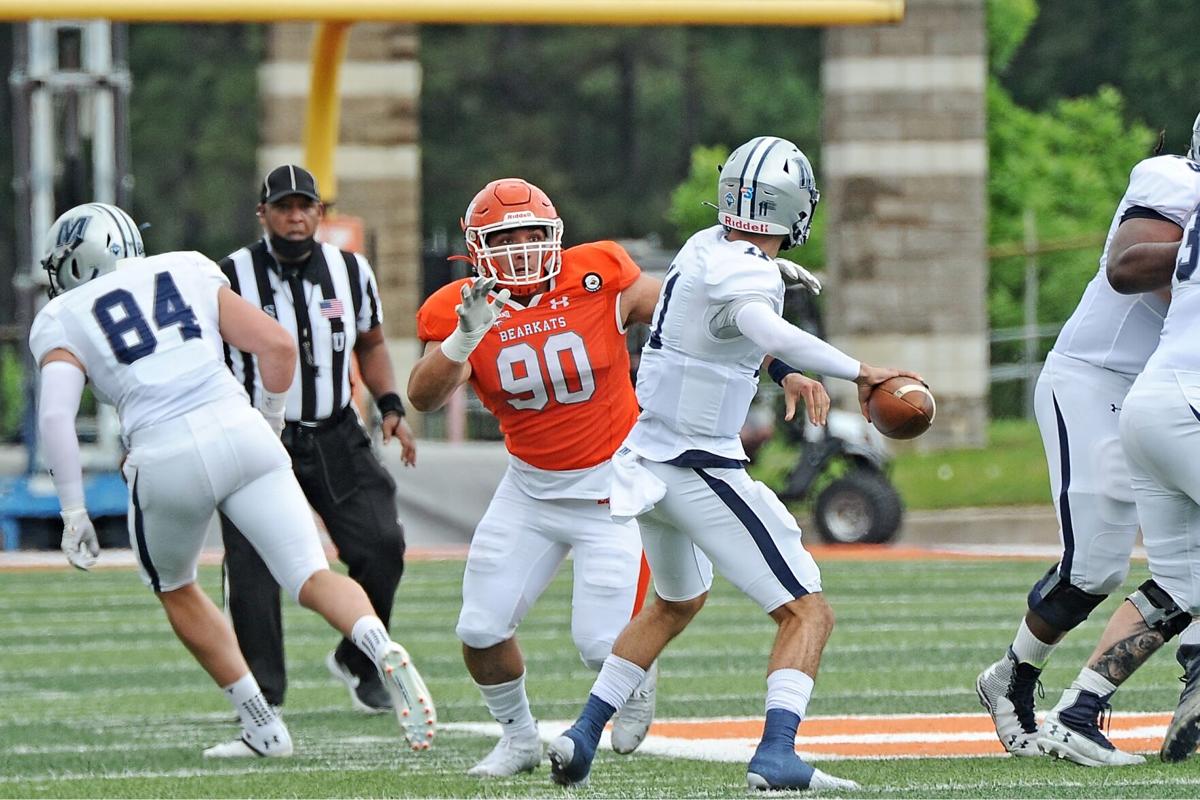 Trace Mascorro pressures Monmouth's quarterback during a first round playoff game in Huntsville. 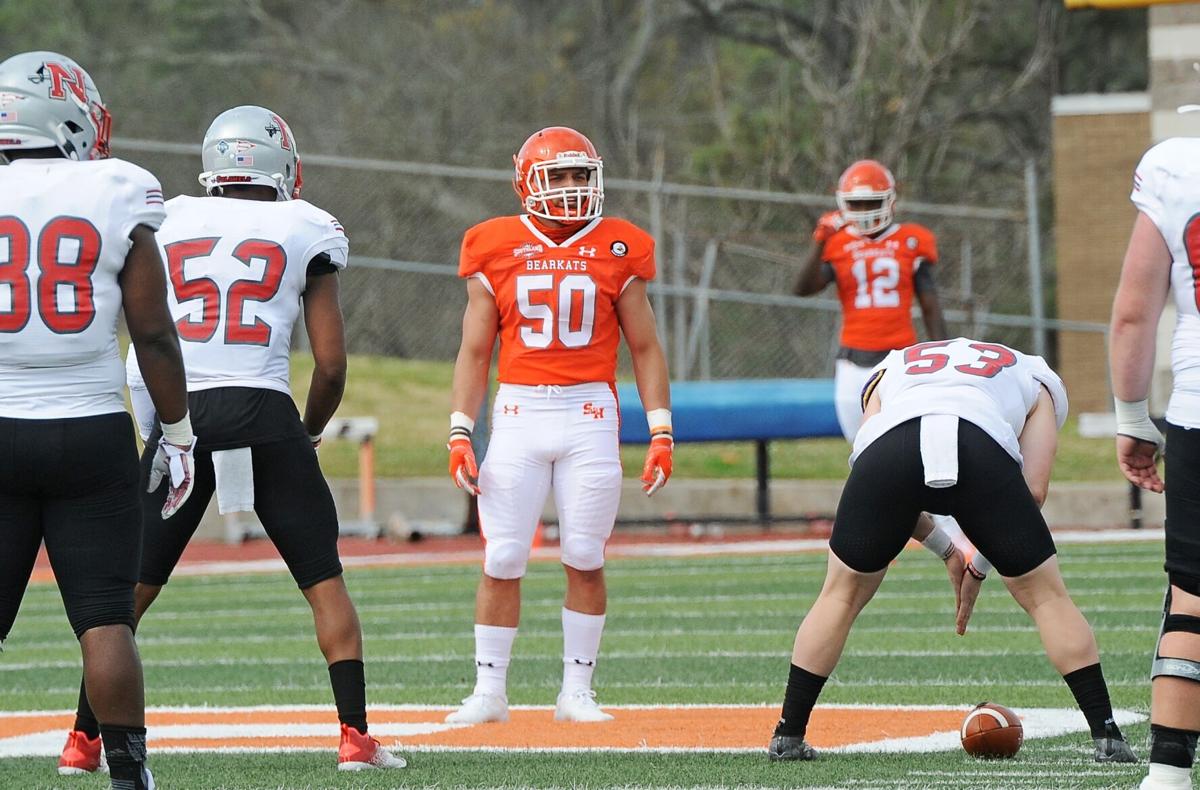 Left: Ysidro Mascorro lines up during a game against Nichols State in Huntsville. Right: Trace Mascorro closes in on James Madison’s Cole Johnson during an FCS semifinal game in Huntsville. 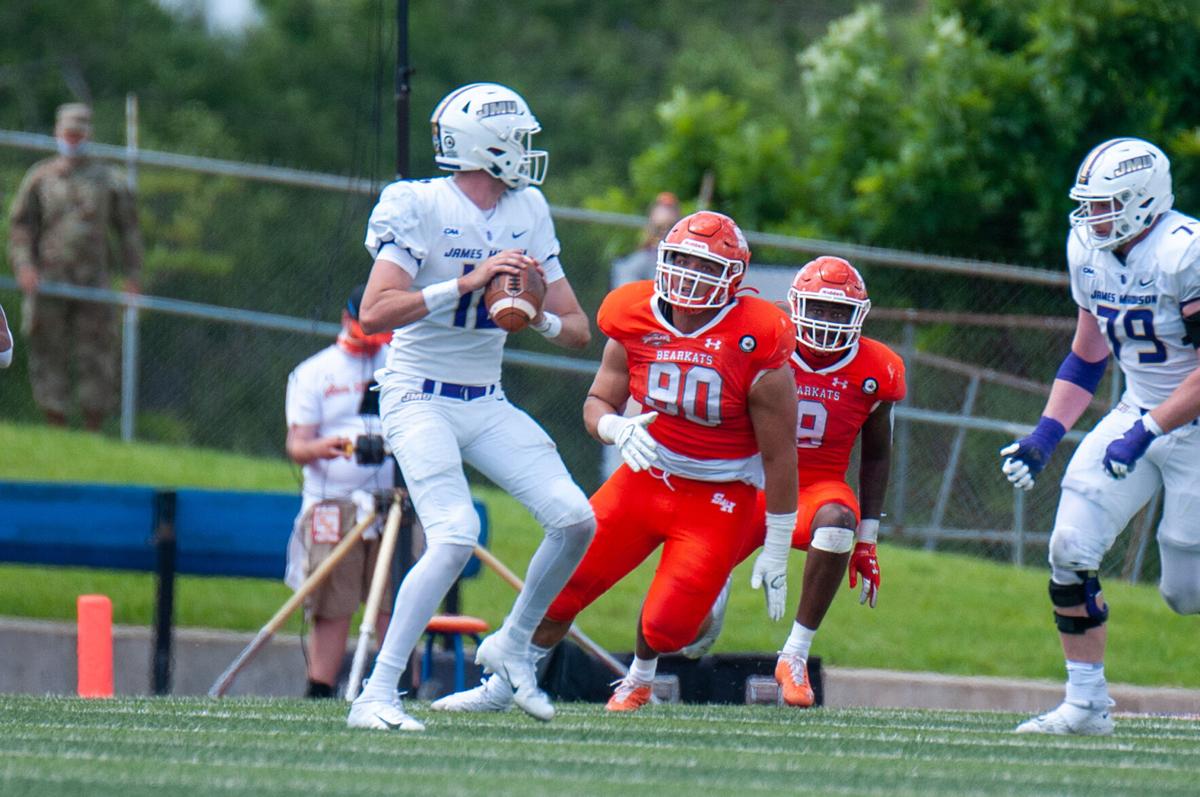 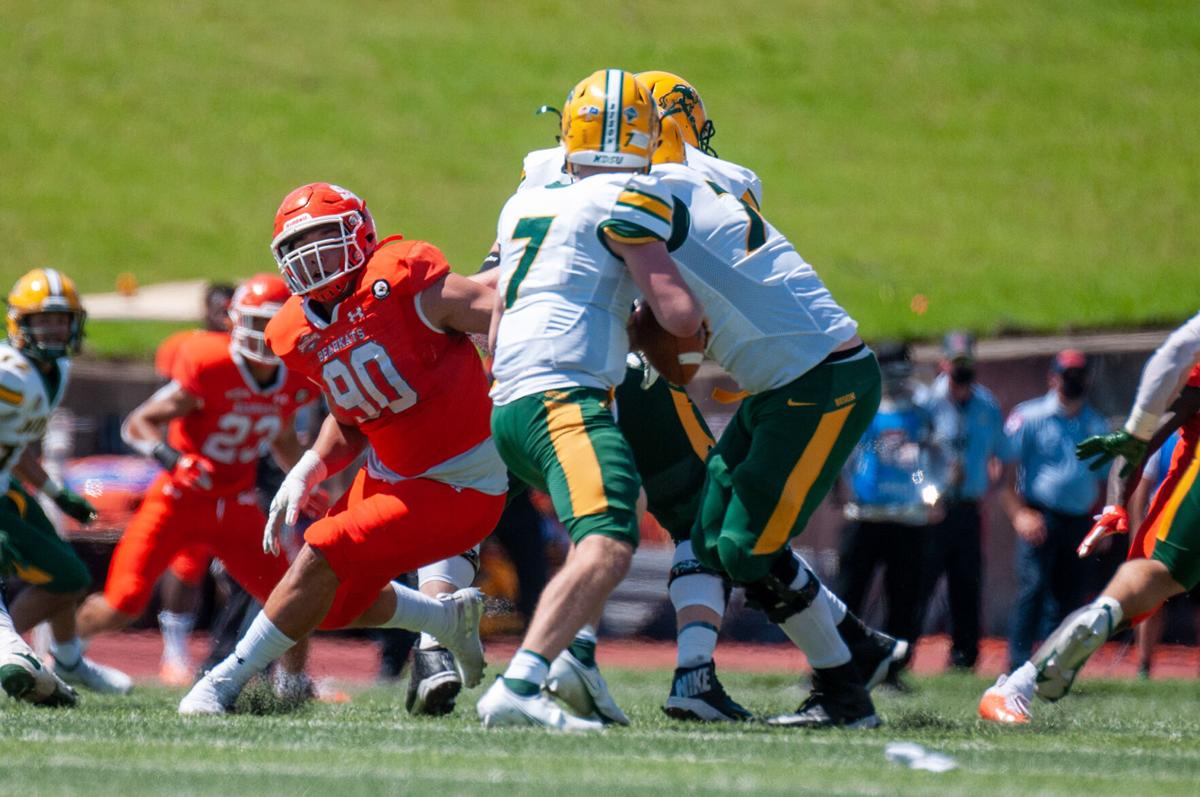 Trace Mascorro fights through a blocker during an FCS Quarterfinal game against North Dakota State. 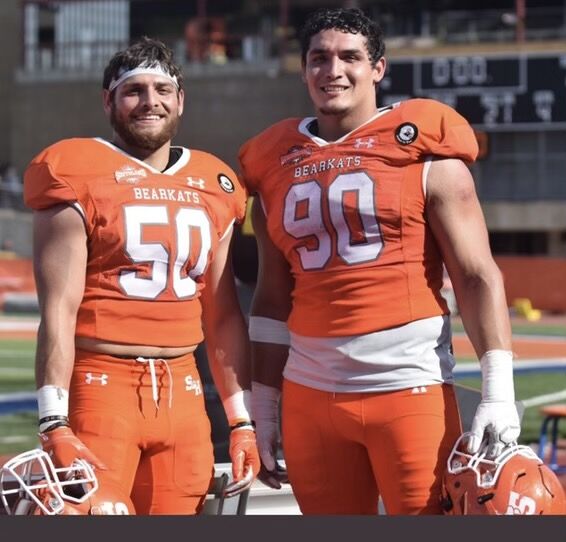 Trace and Ysidro Mascorro pose together before a game

Trace Mascorro pressures Monmouth's quarterback during a first round playoff game in Huntsville.

Left: Ysidro Mascorro lines up during a game against Nichols State in Huntsville. Right: Trace Mascorro closes in on James Madison’s Cole Johnson during an FCS semifinal game in Huntsville.

Trace Mascorro fights through a blocker during an FCS Quarterfinal game against North Dakota State.

Trace and Ysidro Mascorro pose together before a game

REFUGIO — Ysidro Mascorro was watching from the sideline as Sam Houston drove down the field late in the fourth quarter at Toyota Stadium in Frisco.

The Bearkats trailed South Dakota State 21-17 and the FCS national championship hung in the balance.

“It was unreal,” Mascorro said. “I remember one of my teammates talking to me and like, ‘Are you praying?’ I was like, ‘Yup.’ I was watching and praying. When he (Eric Schmid) dotted it between those two defenders...touchdown. Once that happened and they started tossing it around, I was like, ‘that’s game.’ Our defense just swarms to the ball and once that started to happen it was relief.”

The Mascorros won a state championship as teammates at Refugio in 2016.

“It’s a much bigger stage,” Trace said. “But on both stages they are very difficult to win. In their own category, they were great.”

Trace’s road from Refugio to Huntsville went through El Paso, where he played two seasons for UTEP, starting his first game on the defensive line as a true freshman at Oklahoma and recording two tackles.

Mascorro transferred after his sophomore season so he could pursue a criminal justice major at Sam Houston, but he is thankful for the two years he spent with the Miners.

“My defensive line coach at UTEP is a small dude,” said the 6-foot-1, 250-pound Mascorro. “He kind of taught me to play with leverage. He told me those big guys don’t like when these small guys get underneath them. He taught me how to play and use leverage.”

Ysidro was hoping for another chance to play with his brother, but wasn’t certain it would become a reality until Sam Houston offered after the Bobcats won the 2019 state championship.

“When the linebacker coach hit me up, there was still no offer,” said Ysidro, who plays at 5-11, 210 pounds . “I went on a visit, and thought, ‘I like this place. It’s where I want to be and Trace is here.’ When they offered, that made it great for the family. That was pretty cool. That was one of the main reasons I picked Sam.”

The Mascorros credit the coaching staff at Refugio for their ability to make the adjustment from the high school to the college level.

Trace started on the defensive line and Ysidro saw playing time at linebacker and on the kickoff team and punt return team.

“Hearing it from all the coaches at Refugio, they said it would be a job and that’s what it turned out to be, was a job,” Trace said. “They pay for your school and they expect you to do some for them also. I think playing at Refugio helped us to be coachable. There’s a reason we didn’t get redshirted our freshman year. We’re coachable. We do what the coaches tell us to do and we get some playing time.”

Neither Mascorro was certain they would be able to play at all this season because of the COVID-19 pandemic, which was extremely disappointing for Trace.

“During spring, we found out they weren’t going to play (in the fall),” Trace said. “It kind of hurt knowing that was going to be my last year and not knowing if we were going to get another year of eligibility or not.”

The Bearkats had practiced for over a year when they found out they were going to be able to play in the spring. But there were other obstacles to overcome when practice began.

“This season has been a lot different,” Trace said. “Our locker room and whole coaching facility were getting torn down and demolished and getting built up. We didn’t have a locker room. The winter storm hit right before fall began. It was like Pee-Wee. We were walking from our cars, helmet and shoulder pads in hand, sitting in the stadium getting dressed and then practicing. It was pretty weird.”

Ysidro was also adjusting to the college level and learning a new system.

“One of the hardest things for me was learning the terminology of how things changed because in Refugio a lot of the stuff we do is man,” he said. “I had to learn zones and the speed of the game. The tempo and how hard you have to play. It wasn’t the same. It was a big step up.”

The Mascorros had to adjust to the competition, but the expectations were much the same at Sam Houston as they were at Refugio.

“When I got there, the talk was about winning the conference and then winning a natty,” Ysidro said. “That was the goal. It’s like in Refugio, it’s state or bust. There it was winning it all. That was one of the main reasons I chose Sam is what they talked about was winning and going far.”

The Bearkats won all six of their conference games and captured playoff wins over Monmouth, North Dakota State and James Madison to reach the final.

The championship game provided obstacles of its own, including a lengthy weather delay.

“We knew it was going to rain,” Trace said. “The thing that was on everybody’s mind is this is a run-heavy team and this is to their advantage. We got out there and it was 7-7 by the time that little delay hit. We figured we had a pretty good shot because it was going to stop raining, and we’ve faced so much adversity this season.”

Trace had three tackles and two quarterback hurries and Ysidro had one tackle in the championship game.

But the most rewarding moment was being able to celebrate together and with their parents, Michelle and Richard.

“I was hoping for a chance,” said Trace, who has already earned his degree and is working on a double major. “I didn’t know if we were going to get a chance or not, but we did and it’s kind of special. In that one year we played together at Refugio, we got a state championship. With this magical spring ball season, we got another year to play with each other and won a national championship.”

“It’s crazy,” Ysidro said. “I tell Trace all the time, ‘Like, dude, it’s like the whole nation. Like everyone.’ I think it’s still a shock to me. It’s cool to win state. It’s awesome to win a state championship. When you hear the whole nation and the gauntlet we had to go through in the playoffs, that’s pretty cool.”

The Mascorro brothers will get another chance to play together in the fall since the spring season did not count toward their eligibility.

They will return to Huntsville when Sam Houston begins conditioning drills later this month.

“It’s not much time at all,” said Trace Mascorro, who had arthroscopic surgery on his knee after the season. “Fortunately, we did not have too many major injuries.”