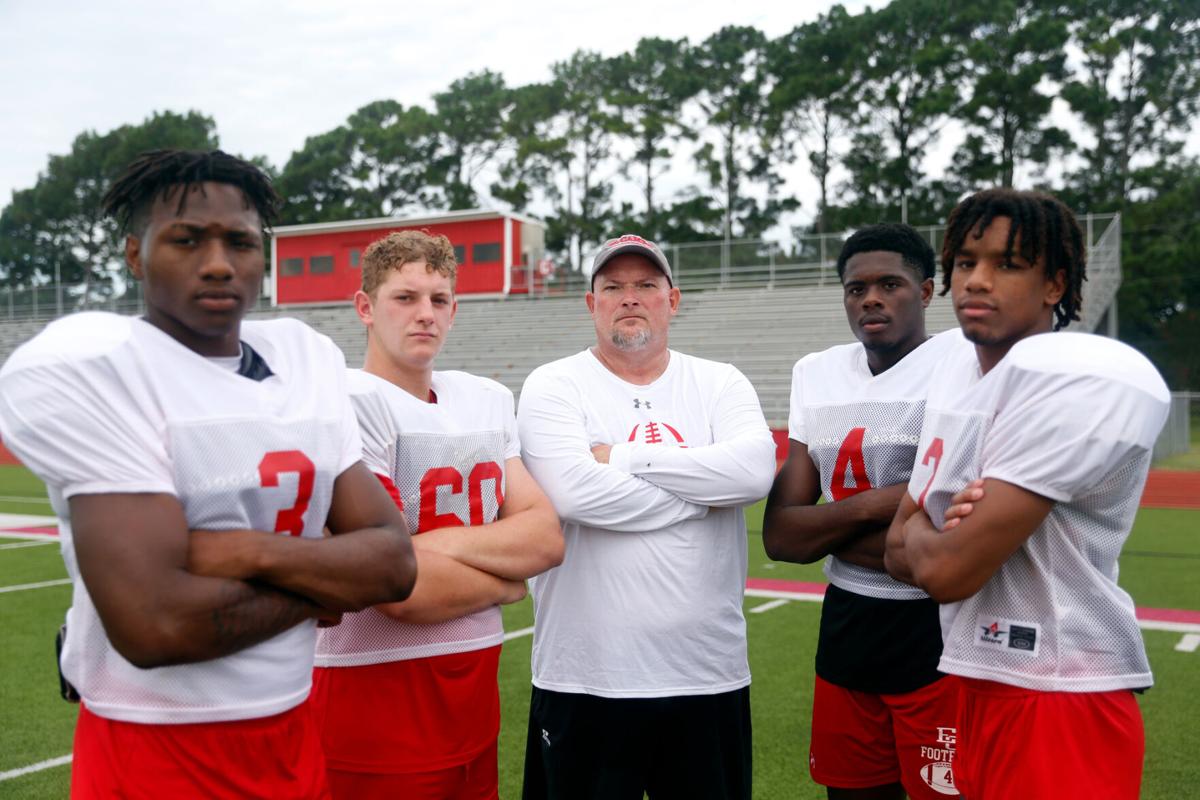 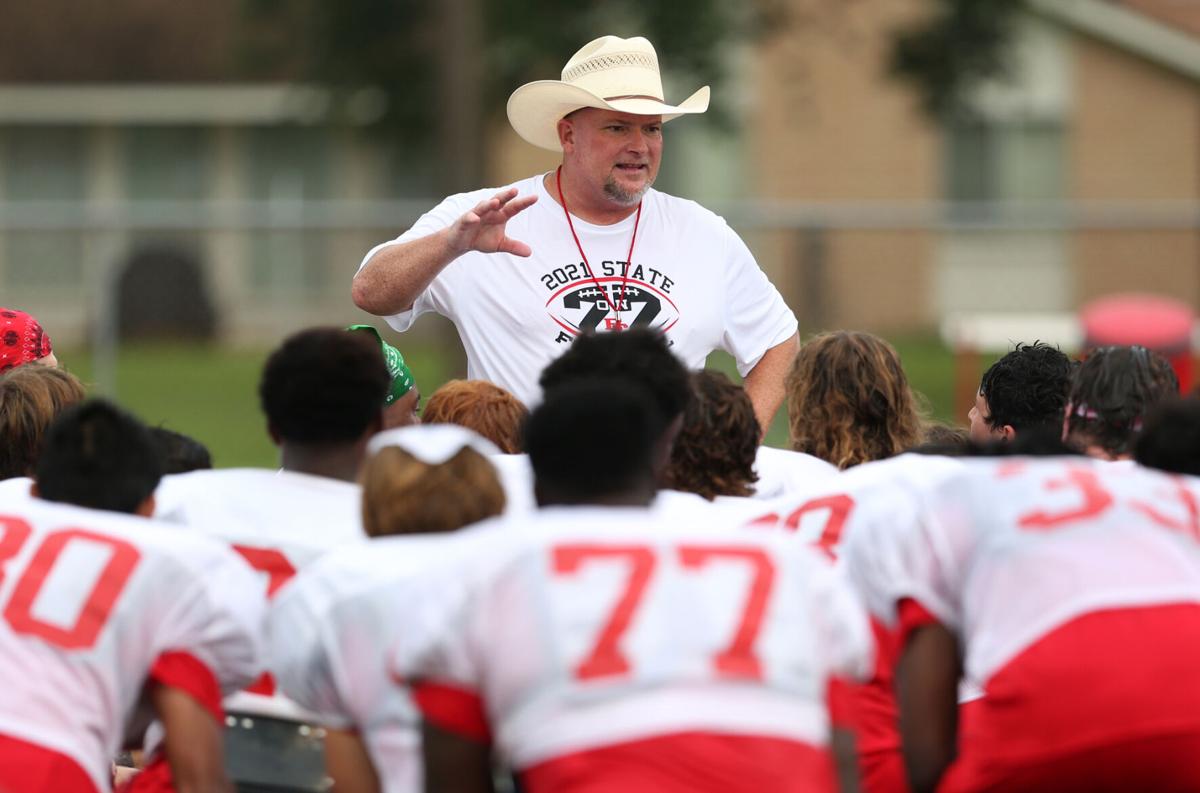 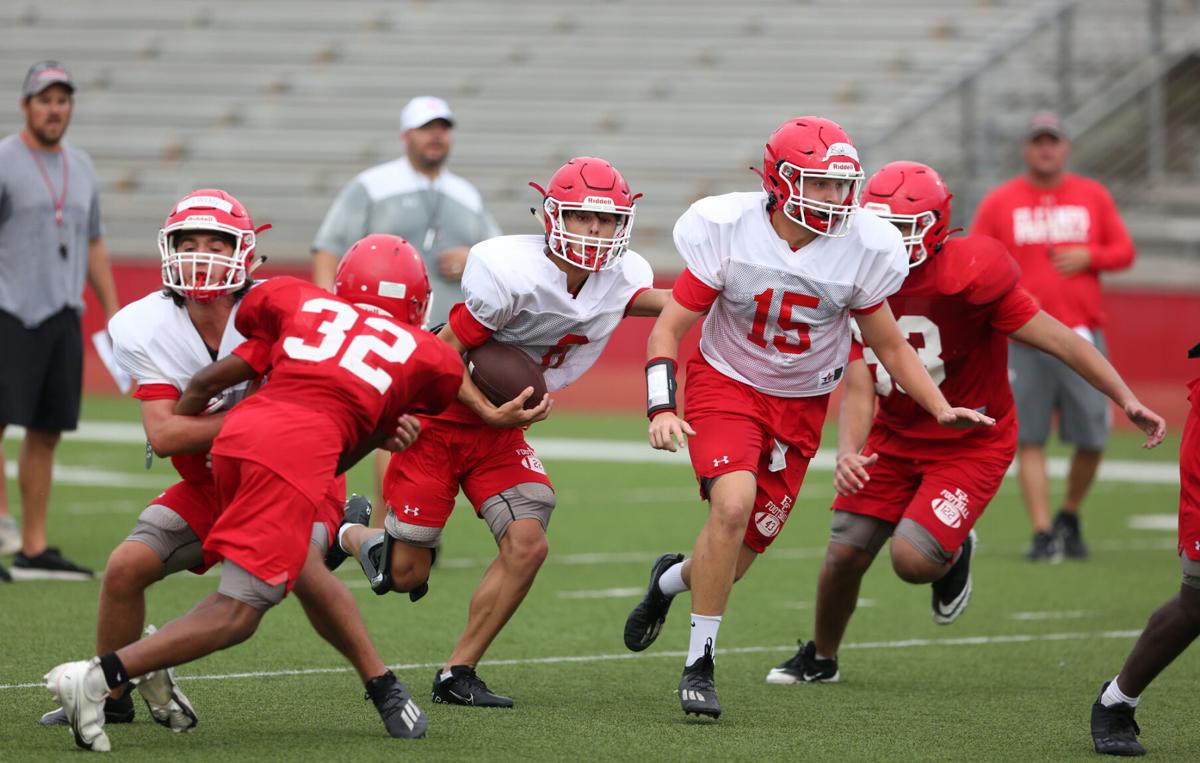 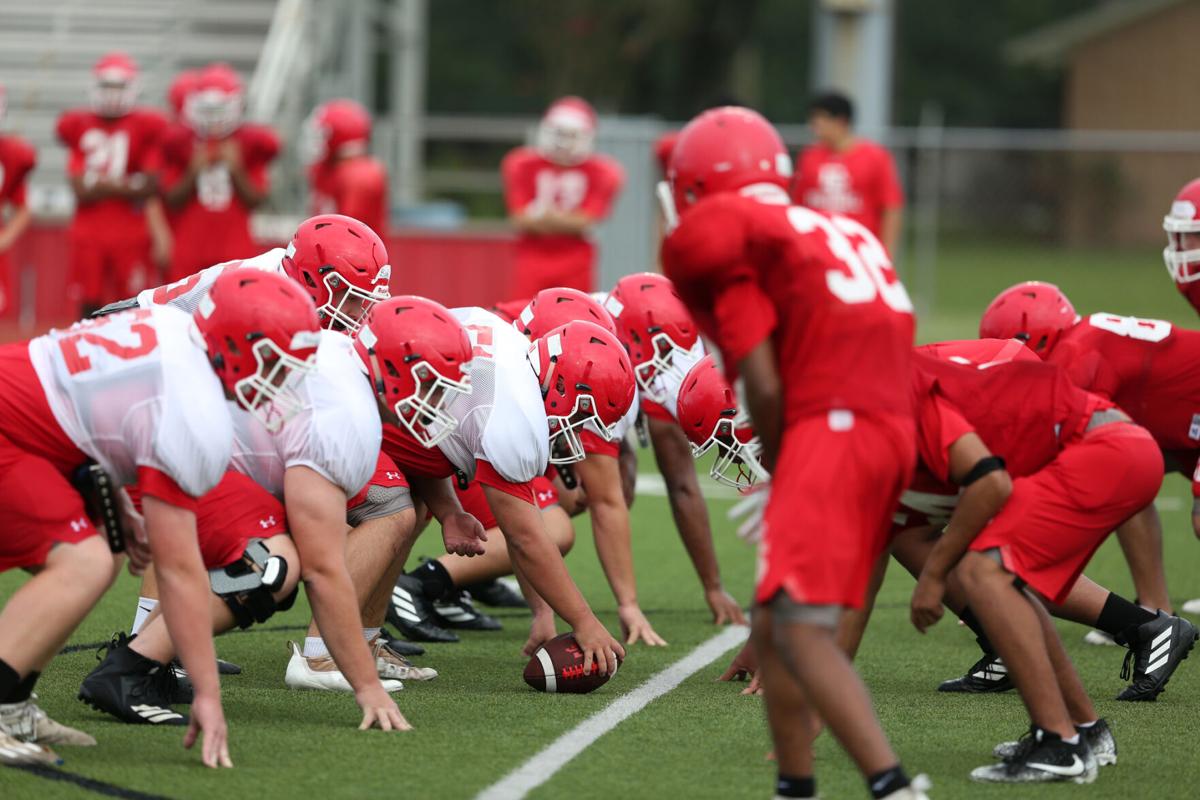 The Ricebirds scrimmage during practice on Friday, Aug. 6, 2021 at Ricebird Stadium. 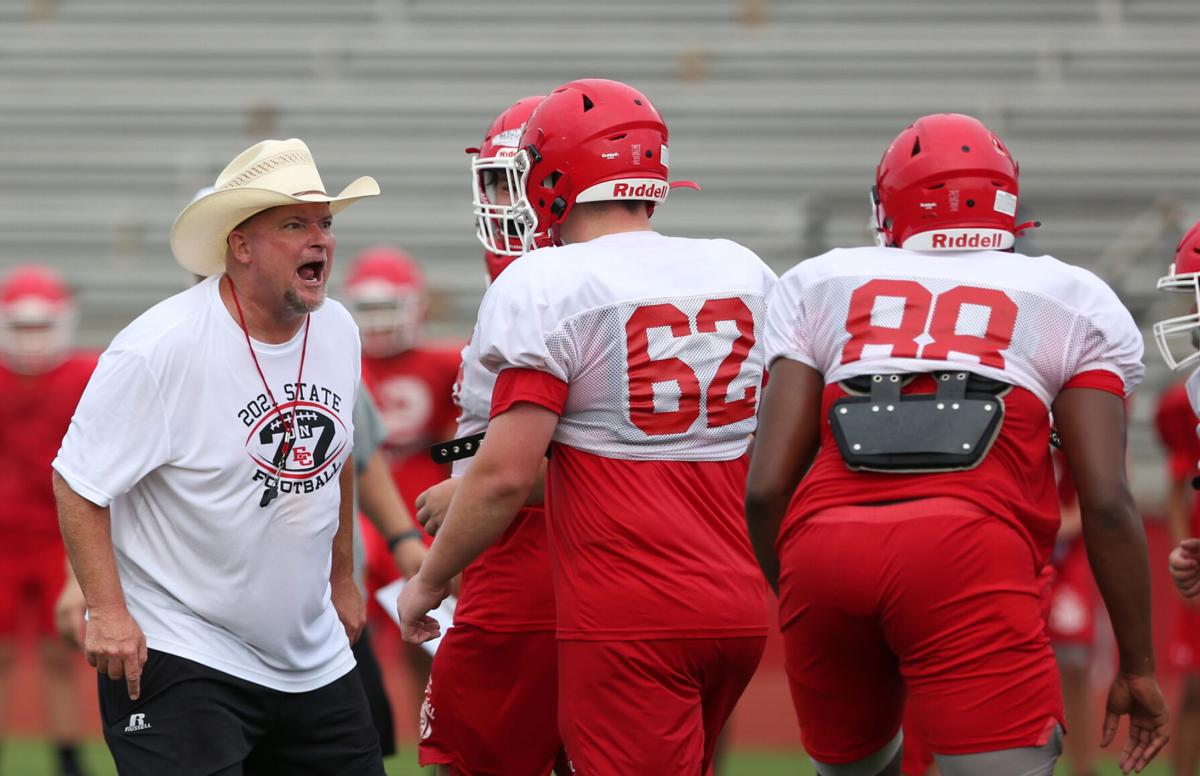 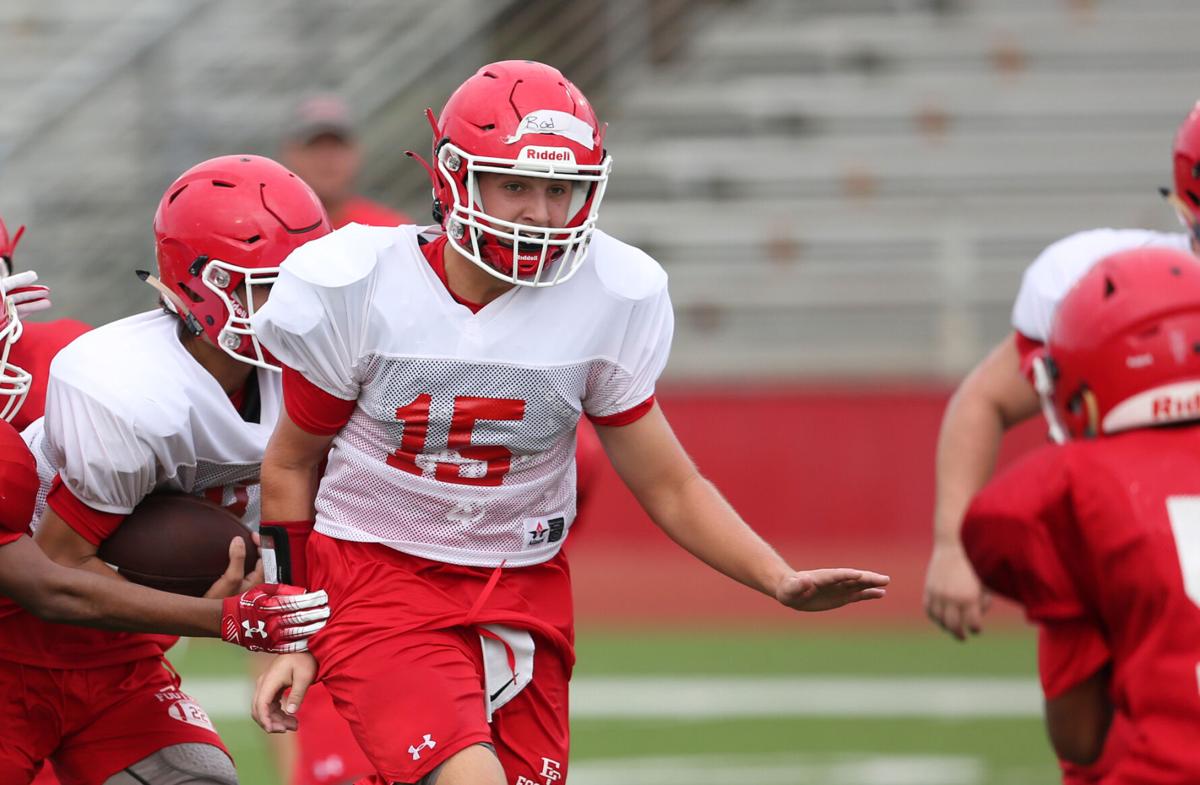 El Campo's Brock Rod prepares to block to protect the ball carrier during practice on Friday, Aug. 6, 2021 at Ricebird Stadium.

The Ricebirds scrimmage during practice on Friday, Aug. 6, 2021 at Ricebird Stadium.

El Campo's Brock Rod prepares to block to protect the ball carrier during practice on Friday, Aug. 6, 2021 at Ricebird Stadium.

EL CAMPO — El Campo will go into the season with a talented and experienced offensive line.

Many of the linemen have played together since they were freshmen, and the Ricebirds won the state lineman challenge during the summer.

But head coach Chad Worrell and his staff have made sure the linemen are far from satisfied.

Worrell and his staff have worked hard to help the Ricebirds reach every bit of their potential since he left Brock and took over in El Campo in February.

“We’re going to coach every play,” Worrell said. “I tell the kids there have been very few plays in my 27 years when I have seen a perfect play. There have been a few. There’s not very many, and that’s what we’re in search of.

“We’re in search of everybody doing their job with the most effort every play,” he continued. “Fundamentally sound, taking the right steps, reading the right blocks and taking the man on the correct way and everything being perfect. That’s what we’re trying to get those kids to understand to get to where we’re doing that consistently.”

Worrell won a state championship in Brock in 2015 and feels the Ricebirds, who come into the season ranked No. 4 in the Class 4A, Division I state poll, have the ability to make a run at a title.

El Campo is no stranger to success, but has not advanced past the third round of the playoffs since making the school’s second state final appearance in 2012.

“Everybody has to buy in,” Worrell said. “Everything from the school board, administration, the teachers, the coaches and also the players and parents in the community. Everybody has to be pulling in one direction. When that happens, special things happen.”

Worrell had been through El Campo twice — he ate dinner at the Greek Bros. Oyster Bar & Grill — before taking the job in February.

He was in the stands at what was then Cowboys Stadium in Arlington when the Ricebirds lost to Stephenville in the 2012 state final.

“I knew it was a community with a lot of pride,” Worrell said. “There was kind of a centralized focus on the schools. That’s always a very attractive thing for a coach to come into where it’s a one high school town and everything centers around that school. There’s a lot of pride in the community about being Ricebirds.”

The biggest change the players have noticed since Worrell and his staff have arrived is in the tone and demeanor of practice.

“Practice has more intensity,” said running back Rueben Owens, who comes into the season as one of the nation’s top recruits with multiple Division I offers. “We’ve been working way harder. It seems a lot different. Everyone is here at practice. There is more intensity. Everyone is working harder.”

Worrell made it clear during the offseason that no position was guaranteed and the players would have to perform to get on the field.

“The kids are getting it,” he said. “We have to practice at a different level and a different pace to prepare for those games. We try to put a lot of pressure on our kids in practice to where when they get to games, it’s easy. That’s kind of our goal. We’ve got work to do, but the kids are responding. It’s a learning process. It’s just about setting that bar and not looking ahead and taking it one step at a time.”

The players are anxious to take what they’ve done in practice and put it to the test on Friday nights.

“At first, our fans are not going to notice much of a difference because we’re getting into the whole full effort,” Dorotik said. “Eventually, they’re going to see everyone putting in their full effort every play and they might see some new faces on the starting lineup.”

“I feel like we’ve got to work harder and practice harder if we want to get to where we want to be,” Owens added. “Everyone has got to show up, everyone has to play hard and give their all.”

El Campo playoff finishes during the past decade.