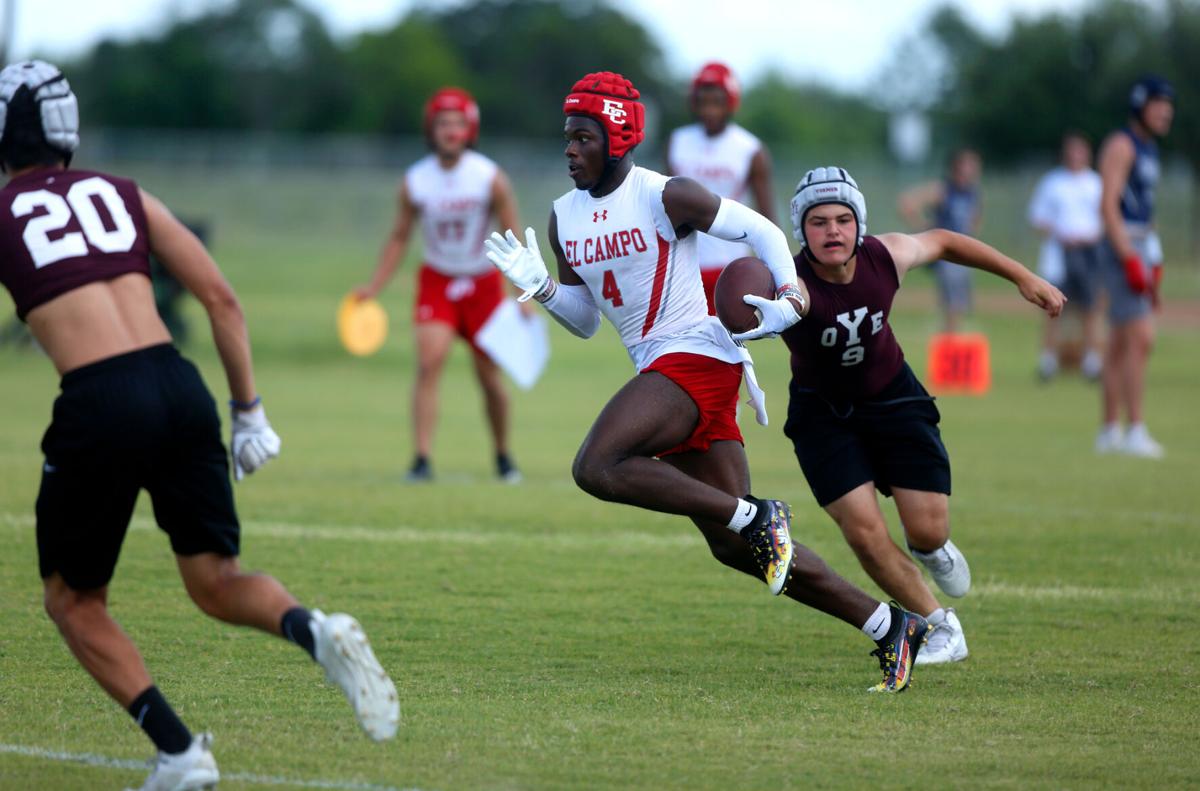 El Campo’s Rueben Owens runs toward the end zone during Friday’s 7on7 state qualifying tournament against Cameron in Cuero. 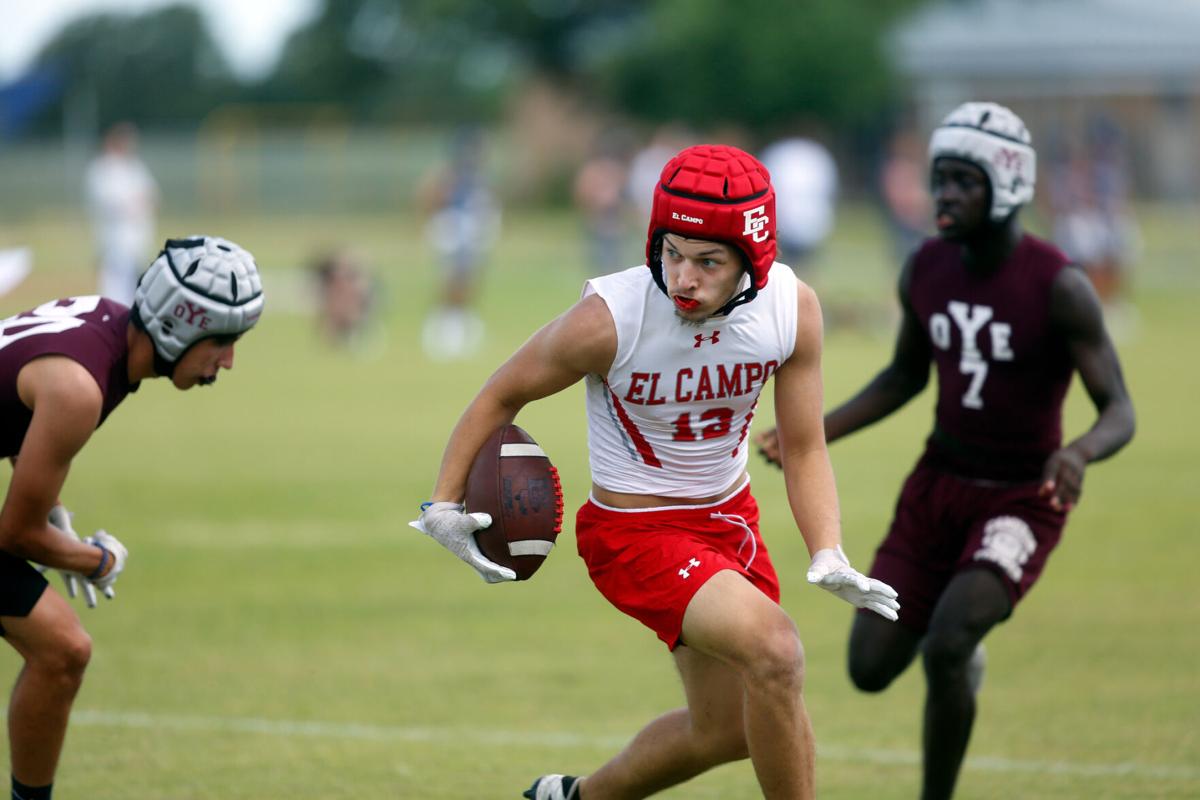 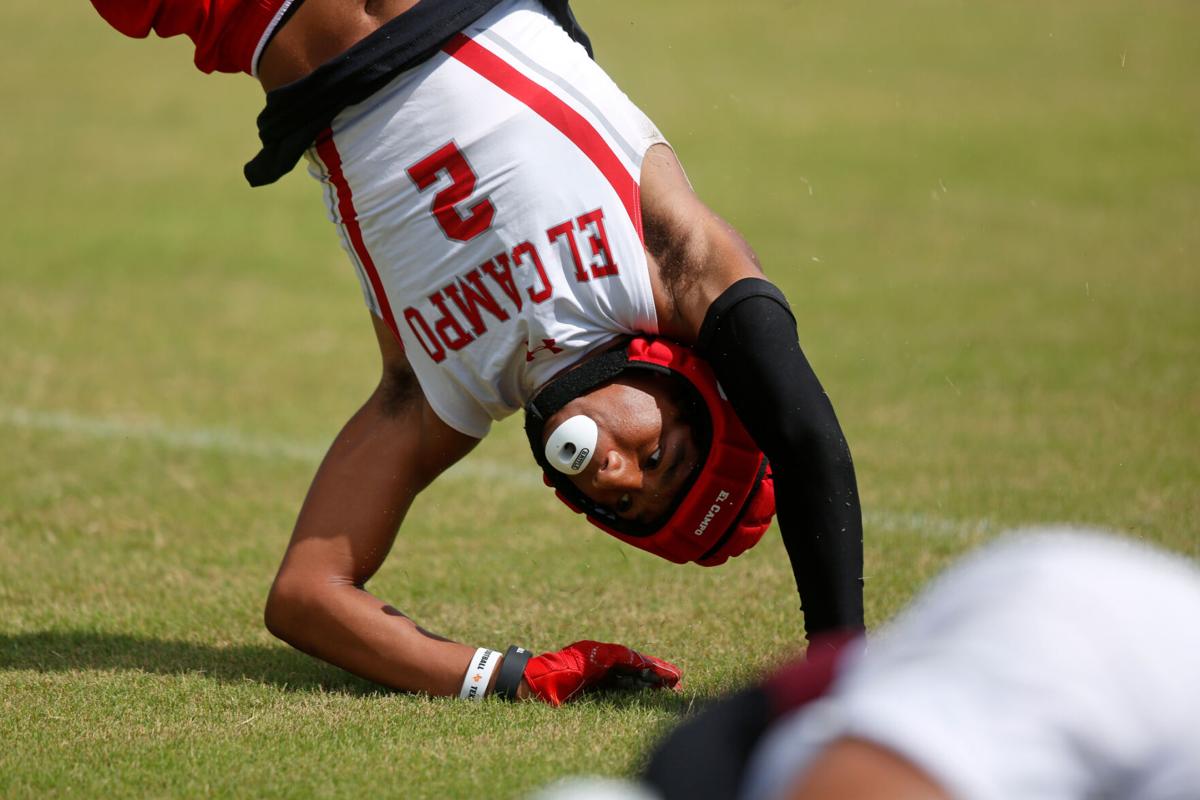 El Campo’s De’Koreyus Ward flips after running into a defender during Friday’s 7on7 state qualifying tournament against Cameron in Cuero. 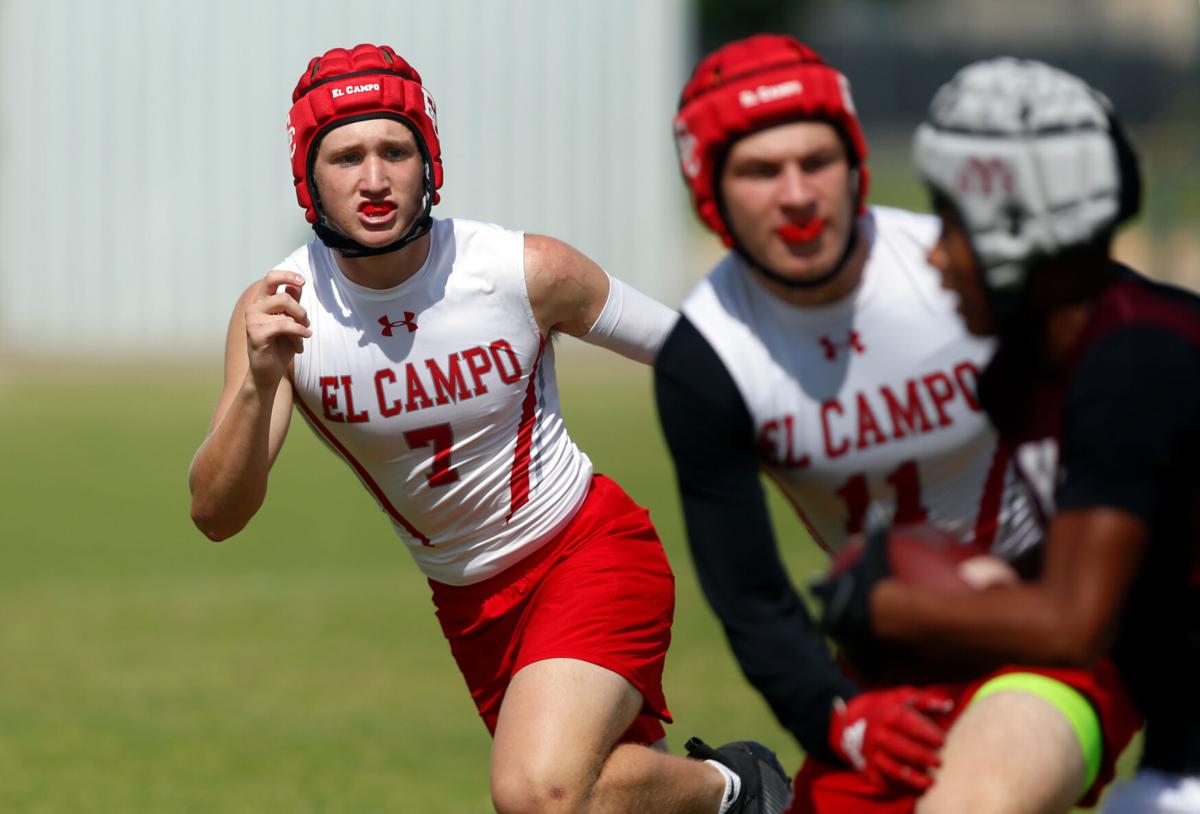 El Campo's Reed Jung chases after the ball carrier during Friday's 7-on-7 state qualifying tournament against Cameron in Cuero.

El Campo’s Rueben Owens runs toward the end zone during Friday’s 7on7 state qualifying tournament against Cameron in Cuero.

El Campo’s De’Koreyus Ward flips after running into a defender during Friday’s 7on7 state qualifying tournament against Cameron in Cuero.

El Campo's Reed Jung chases after the ball carrier during Friday's 7-on-7 state qualifying tournament against Cameron in Cuero.

EL CAMPO — A group of El Campo players will board a bus Thursday headed to College Station.

Another group of Ricebirds will board a bus Friday for a trip to Abilene.

But regardless of the destination, the Ricebirds have the same thought in mind.

“I think we’re going to learn a lot about the state environment,” said senior Jack Dorotik. “We’ll also get a chance to see better competition.”

El Campo will make its first appearance at the state 7on7 tournament since 2018 on Thursday at Veterans Park in College Station.

The Ricebirds will also compete in the state lineman challenge Saturday at Hardin-Simmons University’s Shelton Stadium in Abilene.

El Campo’s ⁦@Ricky_Ricebird⁩ Hal Erwin ⁦@HalErwin1⁩ and the Ricebirds ⁦@RicebirdsFB⁩ play at the state 7on7 tournament in College Station. pic.twitter.com/GhPzhshlFJ

El Campo went 19-0 in 7on7 games, but will face a challenge at the state tournament in a pool with defending Class 4A, Division II champion Carthage, Melissa and Whitney.

“If you want to play with the best, you’ve got to be able to beat the best,” said first-year El Campo coach Chad Worrell. “We don’t shy away from that competition. We know we’ve got probably the toughest pool. We’re definitely going to be thrown into the fire, but it’s good for our kids to get out there and compete with some of the best kids in the state.”

The work the Ricebirds have done this summer has helped them feel more comfortable in Worrell’s offense.

“The coaches coming in are bringing something new that our opponents haven’t seen,” said senior Carson Whittington. “We have a lot of new formations, new plays, new pass combinations. I think in the little we practiced, they’ve all been incorporated in those practices.”

El Campo’s line will be an experienced unit led by two three-year starters. The Ricebirds qualified for state by winning the War Zone Lineman Challenge in Spring.

“It’s just everybody working as a unit and being one part and working as a team,” said senior Kerry North. “We’ve been working hard during the offseason getting bigger and stronger. We’ve gotten more explosive as we’ve got more drills in. We should get better as the year goes on.”

The Ricebirds will go into the season ranked No. 4 in the state Class 4A, Division I poll.

Worrell knows there’s no guarantee this summer’s success will carry over into the season, but is encouraged by what he’s witnessed.

“What it does mean is you have your kids out working out and competing,” he said. “It shows you’re good enough to compete against other schools. Our kids have been competing and had a great month of June and we’ve had a great turnout for summer conditioning. They’ve got to spend a lot of time competing with each other. That says we have some kids with talent that are willing to go out and work hard.”

Each team will play three games in pool play Thursday before playing at least one single-elimination game Friday.