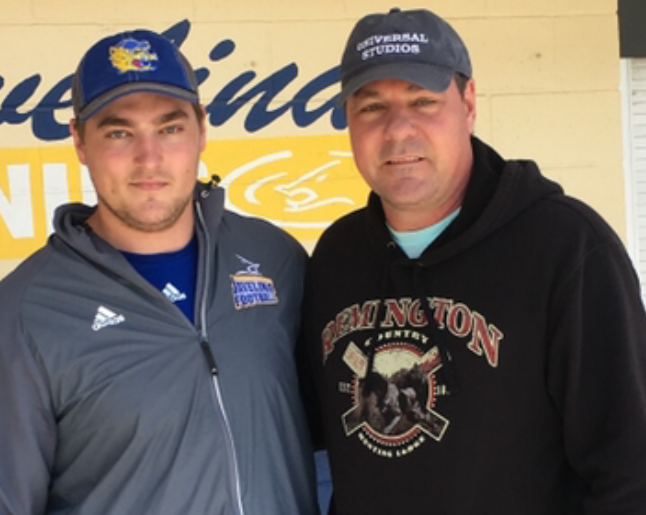 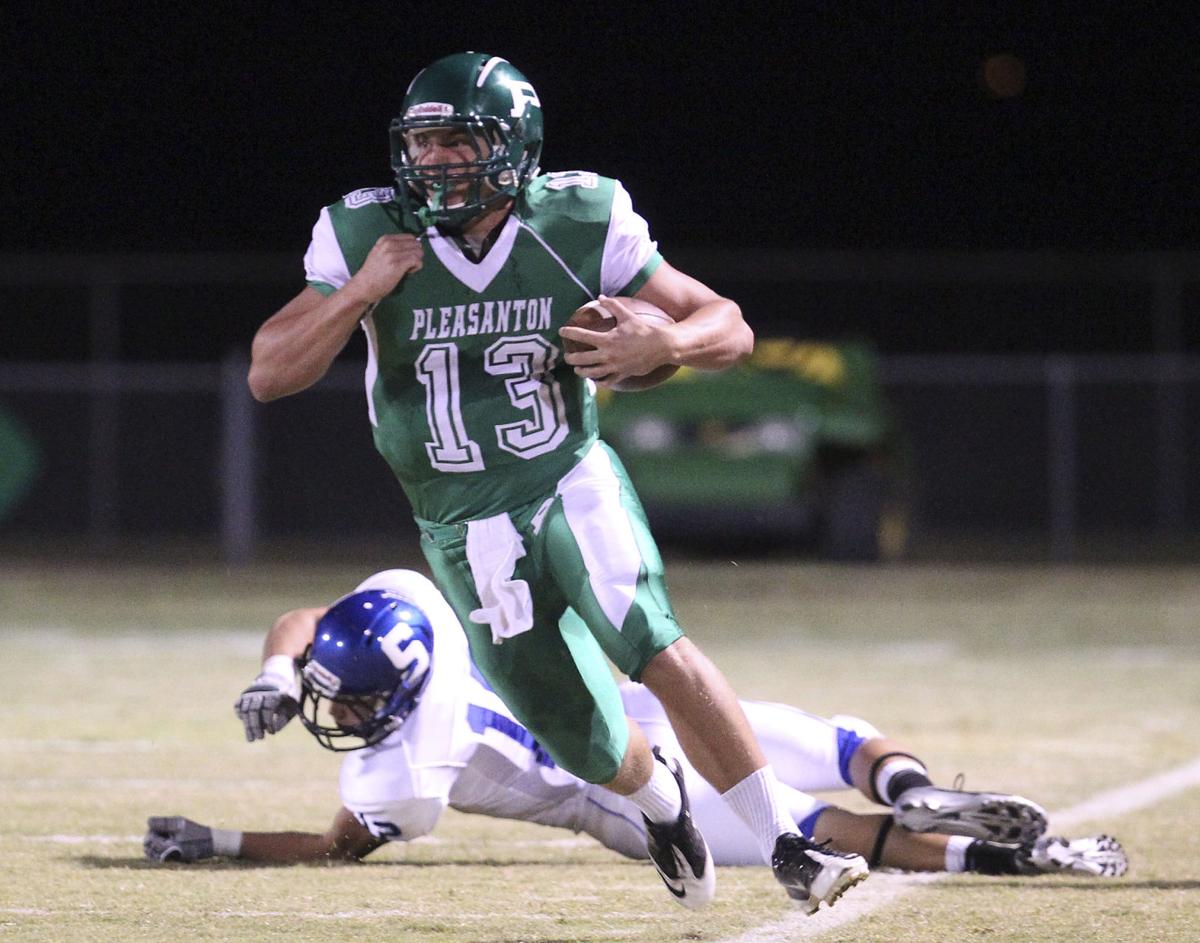 Former Pleasanton quarterback Luke Walters runs past Somerset’s Zachary Wiseman during a game in Pleasanton on Nov. 2, 2012. Walters was named the offensive coordinator at Victoria East in May. 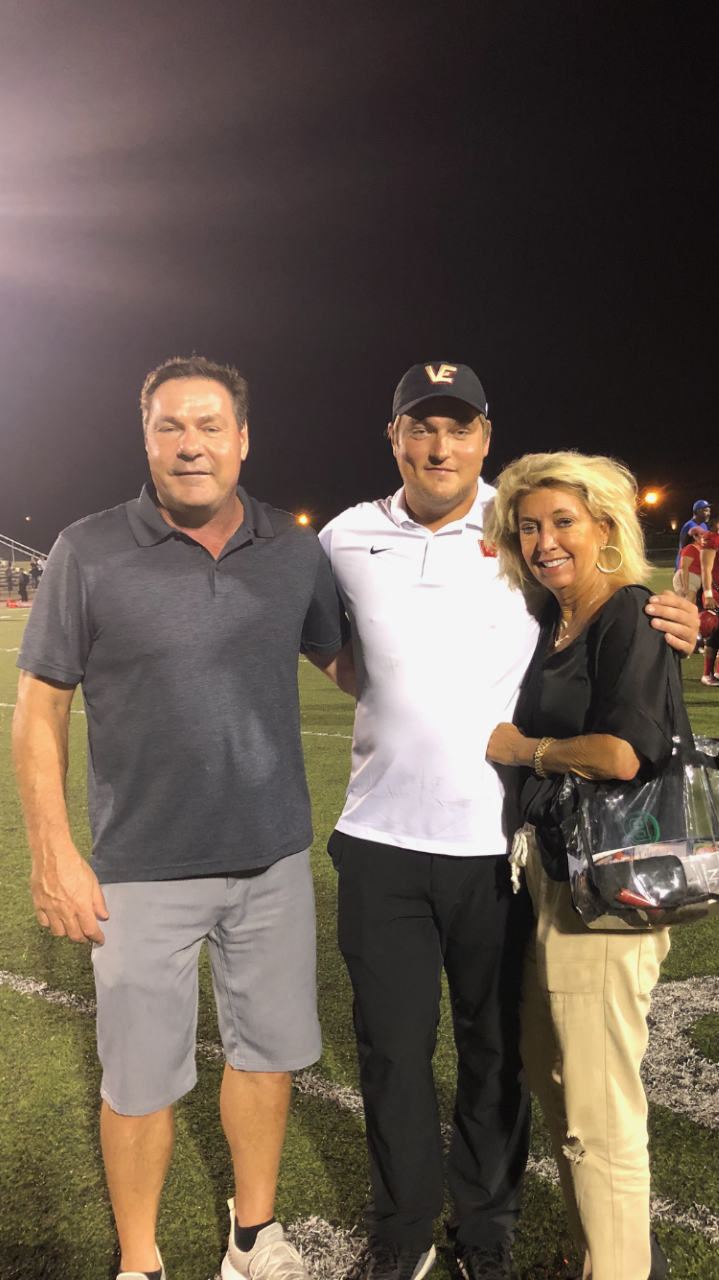 Luke Walters, middle, shares a moment with his father, Keith Walters and mother, Laura Walters after a Victoria East football game at Memorial Stadium in 2019. 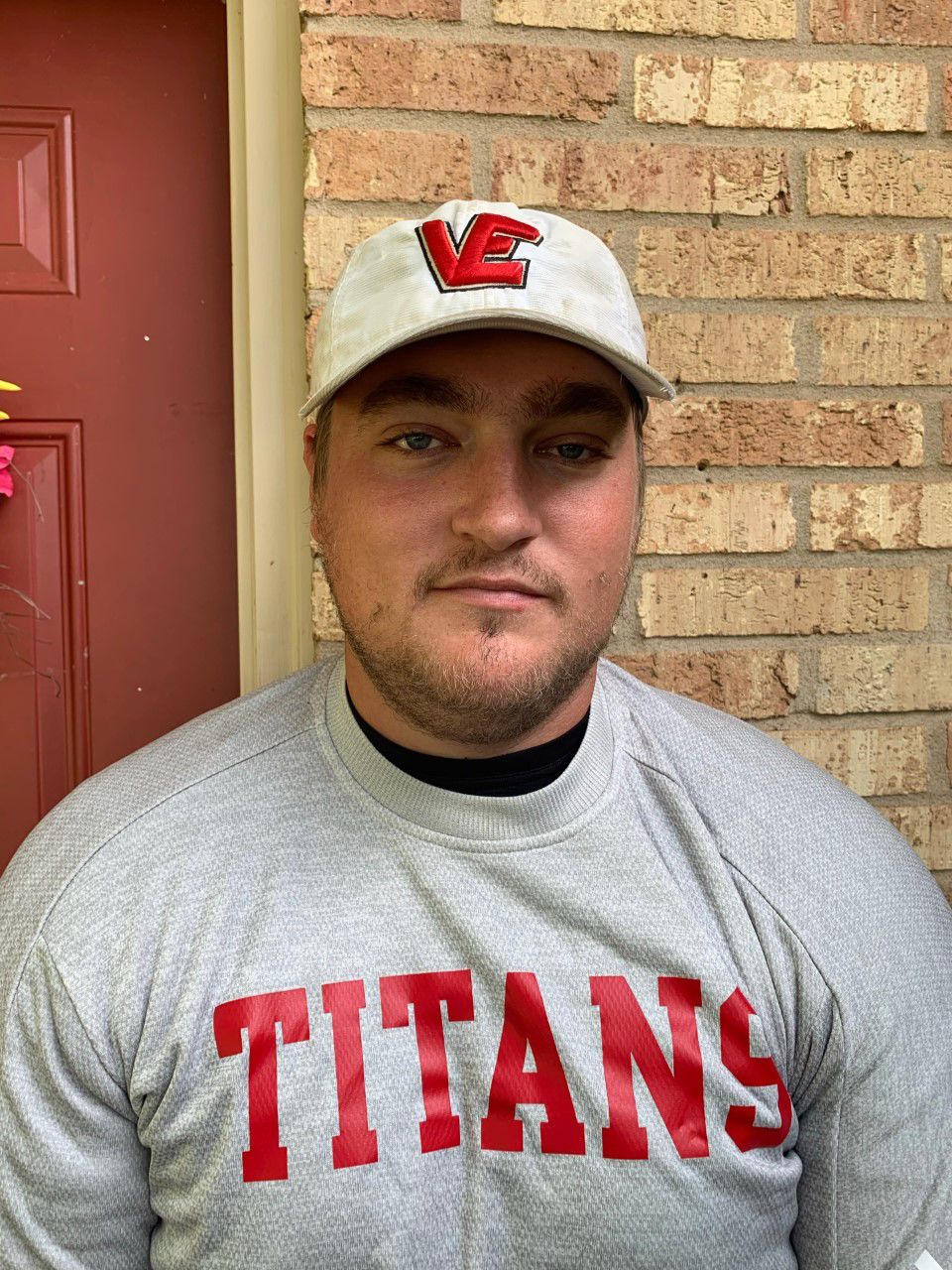 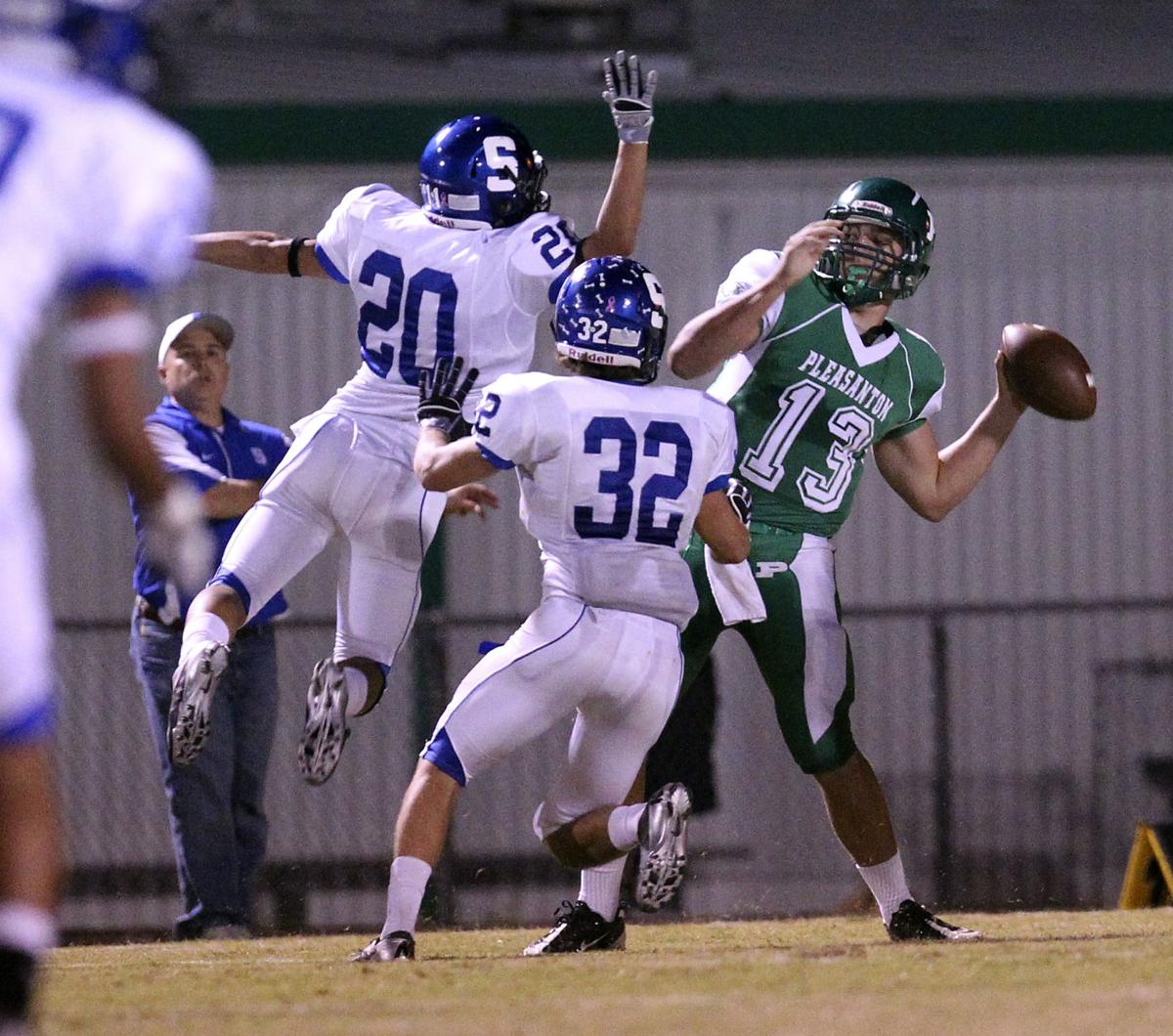 Former Pleasanton quarterback Luke Walters looks to pass, while Somerset’s Chris Vasquez (20) and Michael Brinkman (32) defend during a game in Pleasanton on Nov. 2, 2012.

Former Pleasanton quarterback Luke Walters runs past Somerset’s Zachary Wiseman during a game in Pleasanton on Nov. 2, 2012. Walters was named the offensive coordinator at Victoria East in May.

Luke Walters, middle, shares a moment with his father, Keith Walters and mother, Laura Walters after a Victoria East football game at Memorial Stadium in 2019.

Former Pleasanton quarterback Luke Walters looks to pass, while Somerset’s Chris Vasquez (20) and Michael Brinkman (32) defend during a game in Pleasanton on Nov. 2, 2012.

Luke Walters can’t remember a football memory without his dad in it.

He also played football at Baylor and started at linebacker from 1981-1982.

But his dad’s most lasting legacy – and the one he’s most appreciative of – is the impression he’s left on him.

“My dad was finished coaching by the time I was born, but it’s one of the things that inspired me,” Luke said. “It was always in his blood. In coaching, you have mentors, and he’s always been mine through coaching and playing. He’s always been there every step of the way.”

Keith stopped coaching in 1994 to spend more time with his family, and when Luke turned 9, he was ready to follow his father’s path.

Even before Luke was born in 1994, Keith was already paving the way to set his son up for success.

“I feel like Luke and I have had a real close relationship,” Keith said. “We’ve always been able to relate about a lot of the same things. He took a love to football and sports in fourth grade, and I had the satisfaction of getting to coach him for two years in youth football. He got an understanding about the game and what the players need to expect.”

Luke was named offensive coordinator at Victoria East in May after the departure of Trenady Offerman.

He coached the wide receivers at East last year in his first season with the team.

“It’s a blessing,” Luke said. “I’m very fortunate, and it’s a great opportunity to be here at East. I’m thankful for all the people who have helped me out and all the coaches. I’m thankful for coach (Roland) Gonzalez putting faith in me with the offense this year.”

Luke Walters is the new offensive coordinator at Victoria East. Walters, 25, is the youngest OC in the school’s 10-year history. @lwalters13 @VEHSTitans pic.twitter.com/W8EmS5F6Mg

Luke began his football career as a tight end, and moved to the quarterback position his freshman year of high school.

He was the starting quarterback at Pleasanton from 2009-2012, and was a first-team all-district selection his junior and senior year.

He passed for 2,683 yards with 35 touchdowns, along with 152 rushing yards as a senior, and remains the career leader in passing yards, attempts and touchdowns for the Eagles.

Luke signed with Texas A&M Commerce after his senior season.

Like his father, he became a coaching assistant at Baylor and was named the wide receivers coach at Texas A&M University-Kingsville under Daren Wilkinson in 2018 before transitioning to East.

“My dad was the first one I called and he was excited for me,” Luke said. “He’s always been there for me. He’s always sacrificed his passion for our family, and I’ve always appreciated that.”

Keith currently lives in Pleasanton and is the president of Pogue Argi Partners in Kenedy.

He never missed watching his son play in high school, and things didn’t change when he became a coach.

“It’s been exciting to watch him and I know he takes it very seriously,” Keith said. “He wants to be successful, and I always told him ‘when you’re able to do work that you love, it makes it easy.’ That’s the key. Coaching is like being a preacher. You have to be born to do it.”

Luke hopes to help lead the Titans back to the playoffs for the first time since 2018.

He feels coaching the players last season will benefit him as he begins his first season overseeing the offense.

“It helped a lot,” Luke said. “The hardest thing coming in was familiarizing myself with the kids before camp. This year, going in and overseeing the whole offense and being around the workouts, has allowed me to get to know the kids so much more.”

VISD recently suspended all summer strength and conditioning camps until July 13 because of the recent spread of COVID-19.

But the Titans still expect to begin the season Aug. 28 against Columbia.

“The one thing that I’ve seen is that our kids are able to make the adjustments by social distancing and following protocol” Luke said. “These kids want to have a season, but our No. 1 concern is their health and safety.”

Luke turned 25 in December, but Keith feels the experience he’s gained over the years has prepared him for this moment.

He is the youngest offensive coordinator in Victoria East’s 10-year history.

“He had some really good opportunities at a young age,” Keith said. “When he went to Baylor and Kingsville, he gained experience and now he’s coaching at the high school level in Victoria. He’s taking the steps you have to go through to make yourself a better coach.

“I told him to work as hard as he can and be smart,” he added. “Don’t make a square fit into a round hole. Make it work, and the rest will take care of it itself.”