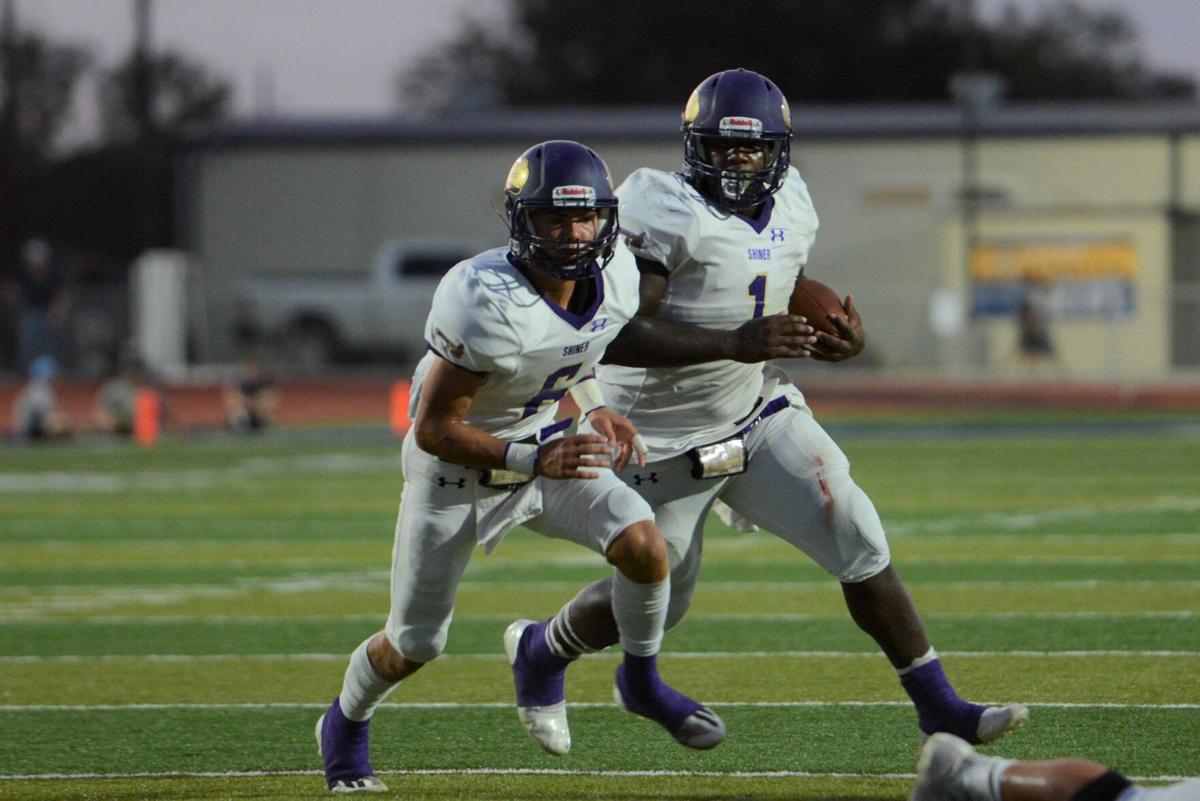 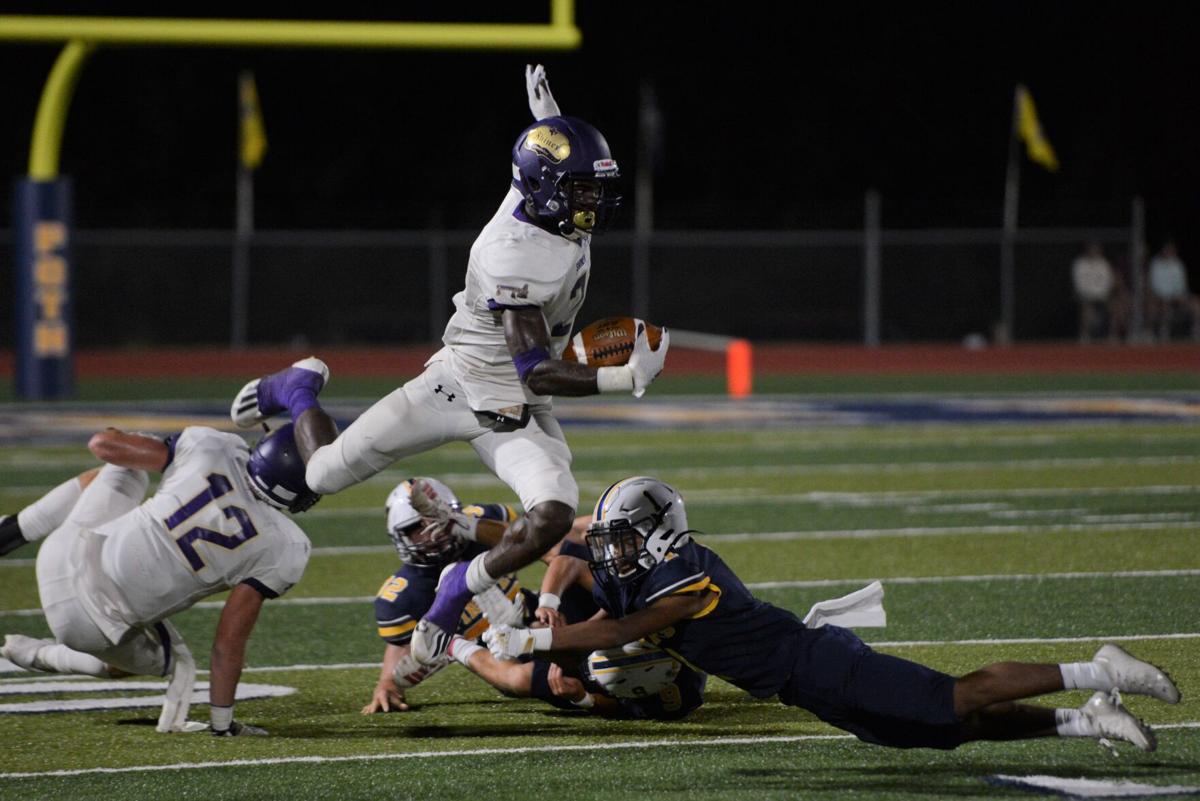 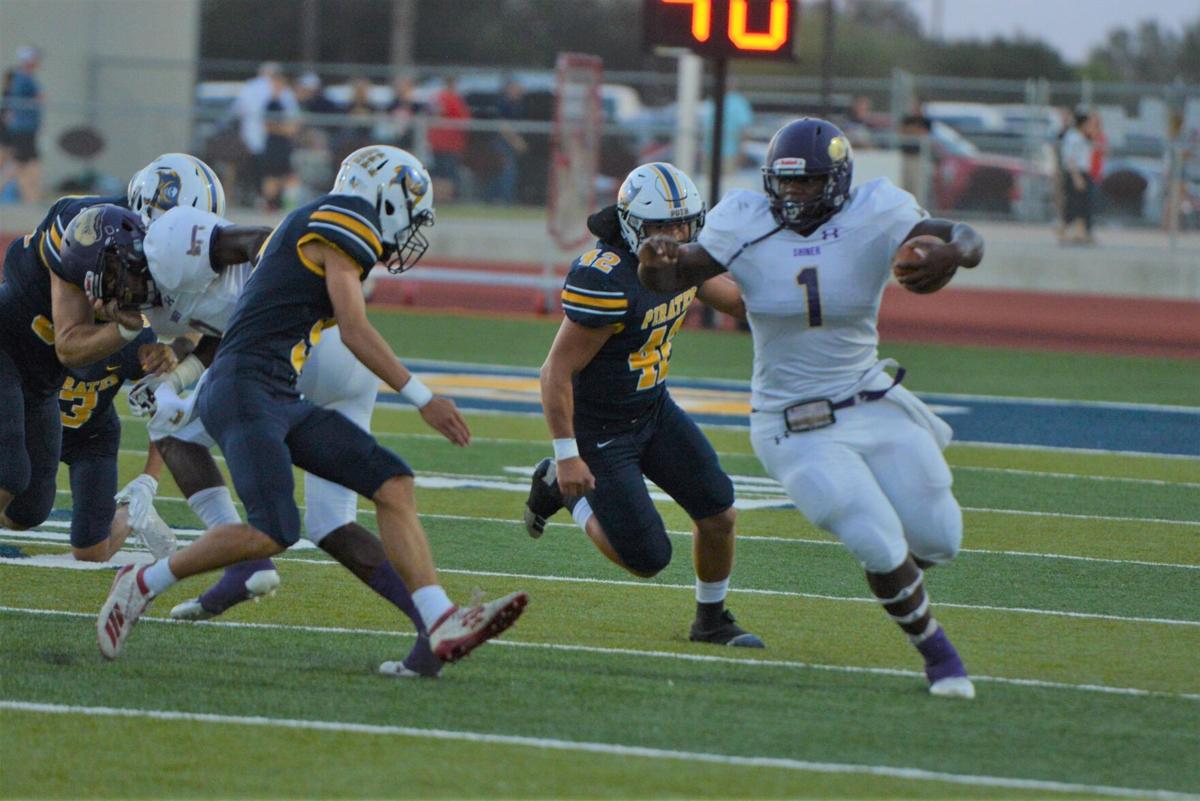 Doug Brooks prepares to collide with a Poth defender during a non-district football game between Shiner and Poth on Sept. 17.

Doug Brooks prepares to collide with a Poth defender during a non-district football game between Shiner and Poth on Sept. 17.

POTH — Shiner’s defense had to make a statement in the second half of its Top-10 clash with Poth on Friday night.

The Comanches — ranked No. 2 in Class 2A, Division I — led the Pirates by 11 at halftime and Poth had momentum following an interception and field goal to close the second quarter.

Shiner (4-0) would go on to score on two safeties by Doug Brooks and a 16-yard interception return by Drew Wenske, while allowing minus-11 yards in the second half to cruise by Poth 39-10.

Shiner’s defense scored a total of four times, and Poth was limited to 123 yards of total offense.

“We went to the locker room and we knew we were ahead, but we weren’t thinking that,” Doug Brooks said. “We came out and knew we had to make a play, big plays turn the game. We needed momentum.”

Doug Brooks would add on a 6-yard touchdown run in the fourth quarter for his only offensive score of the game.

Shiner, which was limited to 184 yards of offense, had to utilize all three phases of the game.

“That was huge because we needed a momentum swing,” said Shiner coach Daniel Boedeker. “On the defensive side, we needed some good things to happen. It started with Dalton’s punts, then the safeties and we got the pick-six later on. Once we figured it out, our defense played lights out.”

Dalton Brooks also wanted to make sure the Comanches started the game on the right foot after falling behind to San Antonio Davenport early in last week’s contest.

Dalton Brooks rushed for 94 yards and a pair of touchdowns in the first half, finishing with a game-high 110 yards on 14 carries.

“In the past few weeks, we hadn’t come out and scored touchdowns,” Dalton Brooks said. “To get those, it was real critical. It just started the game right for us.”

The Comanches also got a good test from Poth’s defense in the first half, which limited Shiner to 142 yards through the first two quarters.

After graduating 22 seniors from last year’s Class 2A, Division I state championship run, Shiner sees the experience from its tough non-district slate as invaluable.

“With the last two games we had, we overcame adversity,” Doug Brooks said. “You have to capitalize on the mistakes that are made. We worked on that in practice and today it showed.”