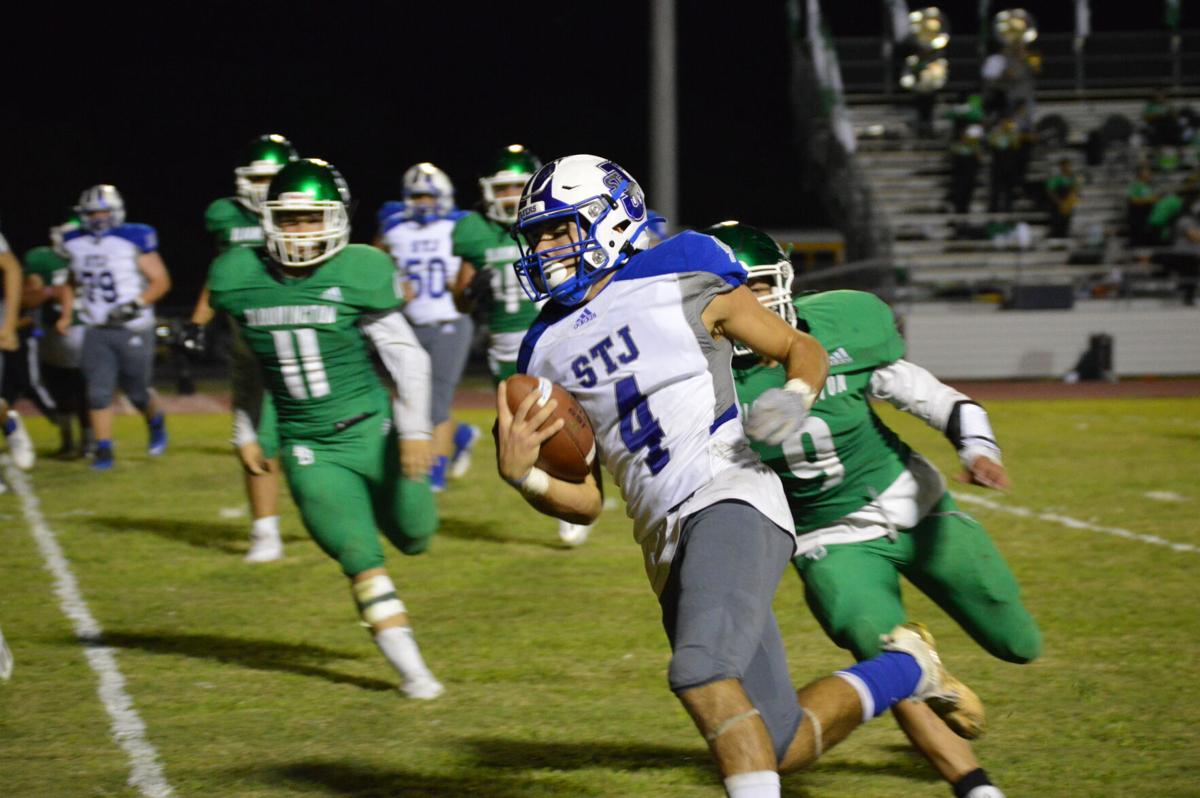 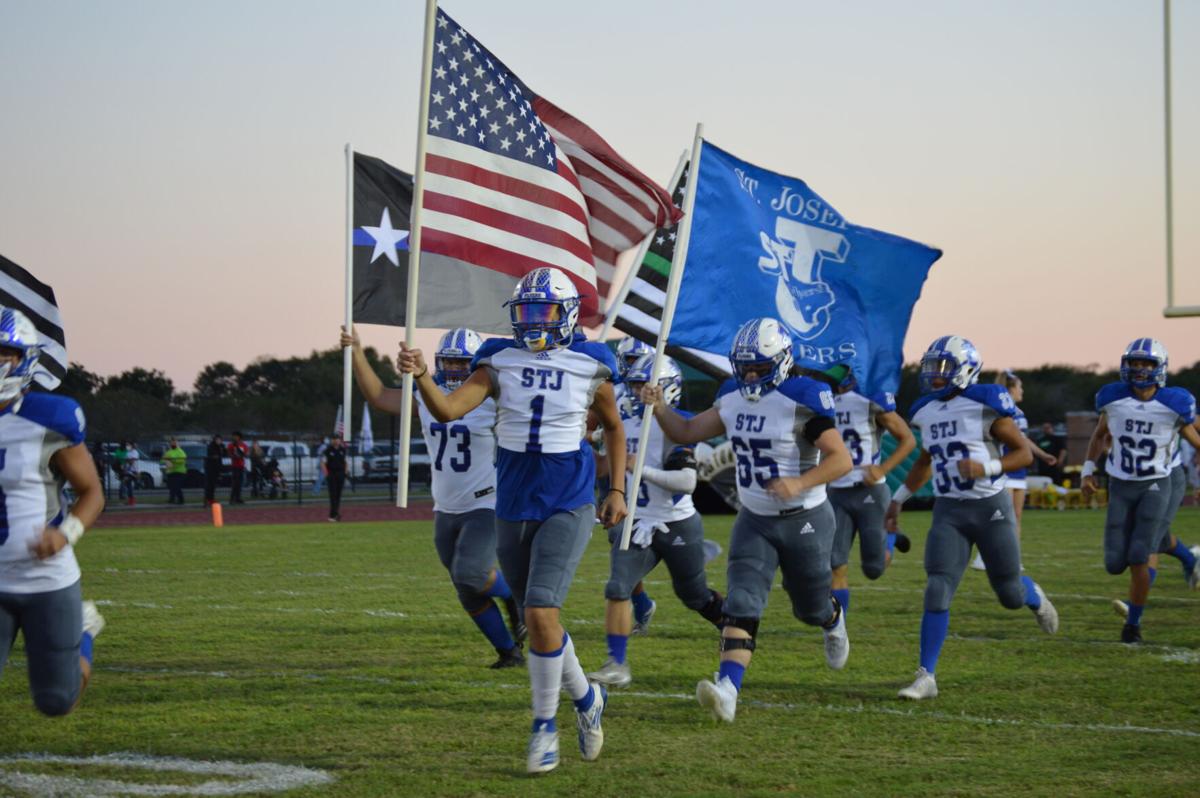 St. Joseph’s Alfredo Vazquez runs onto the field before a non-district football game at Bloomington on Sept. 25. 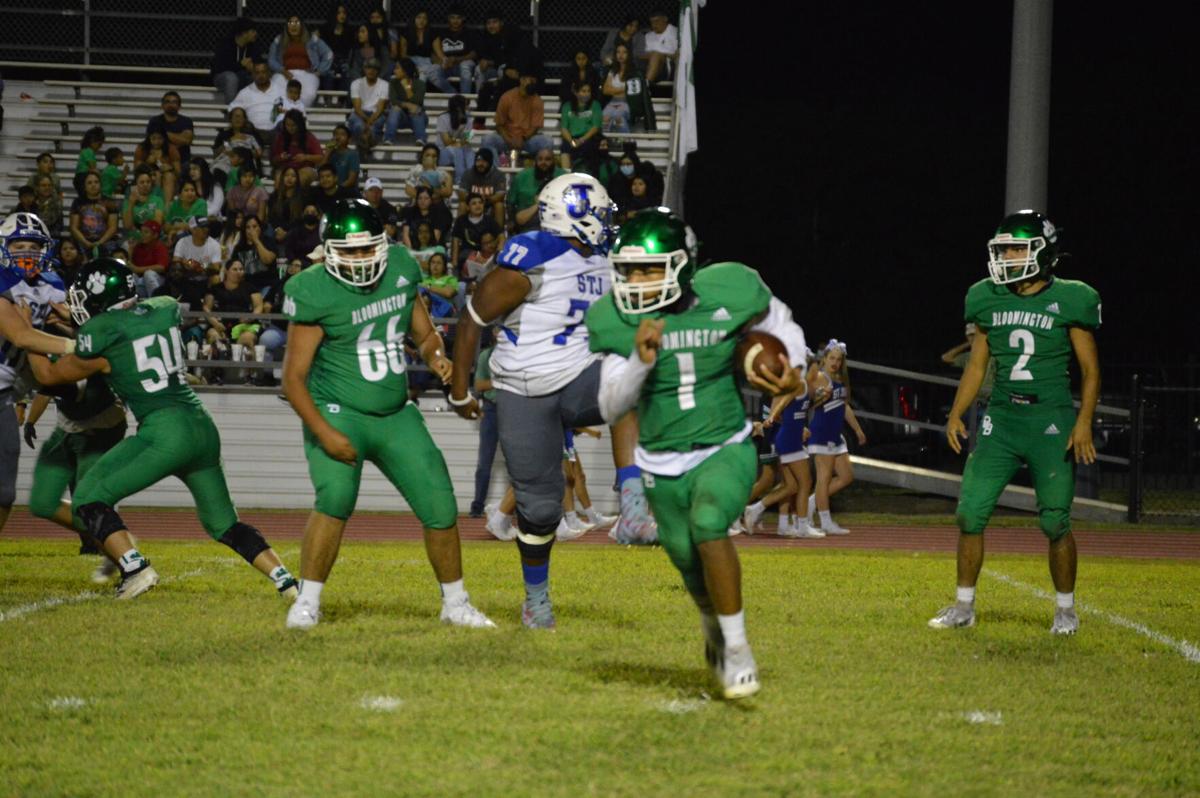 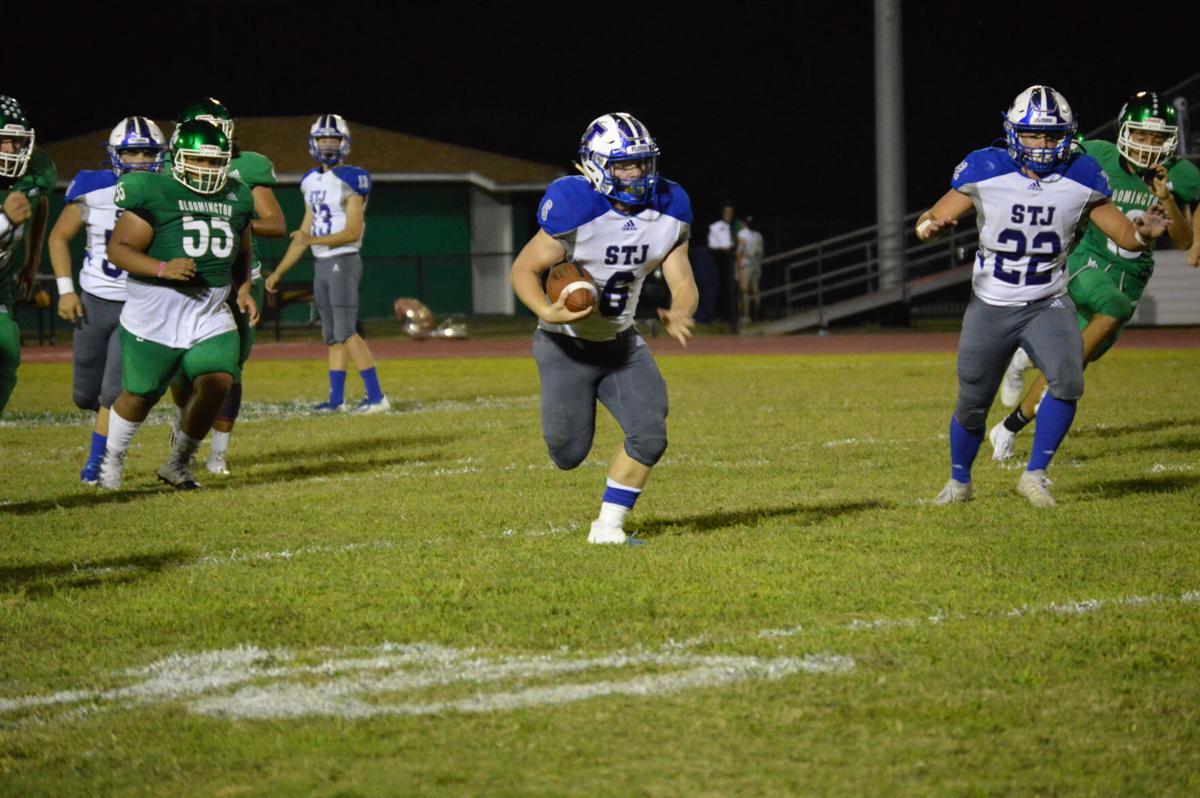 St. Joseph’s Gage Barrera runs with the ball in a non-district football game against Bloomington in Bloomington on Sept. 25. 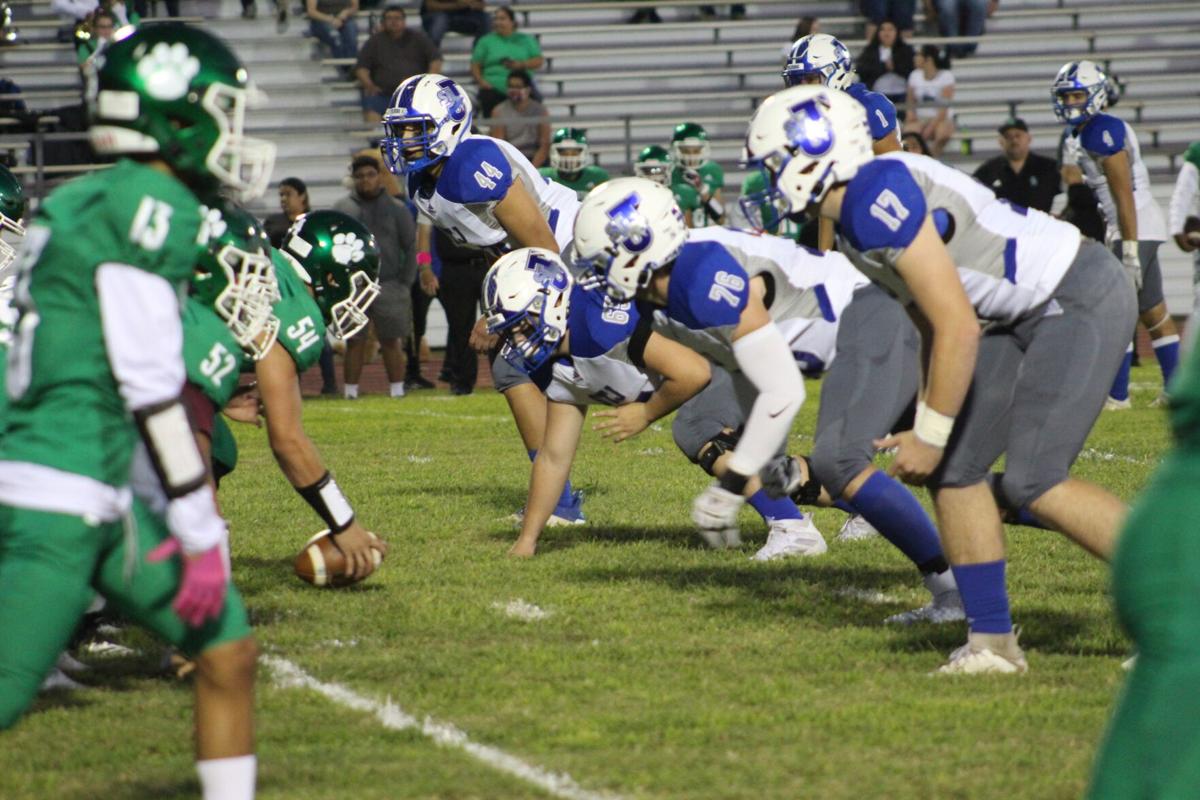 St. Joseph’s Paul Mabray, John Cantu and Sam Harrell lead the defense in a non-district game against Bloomington in Bloomington. 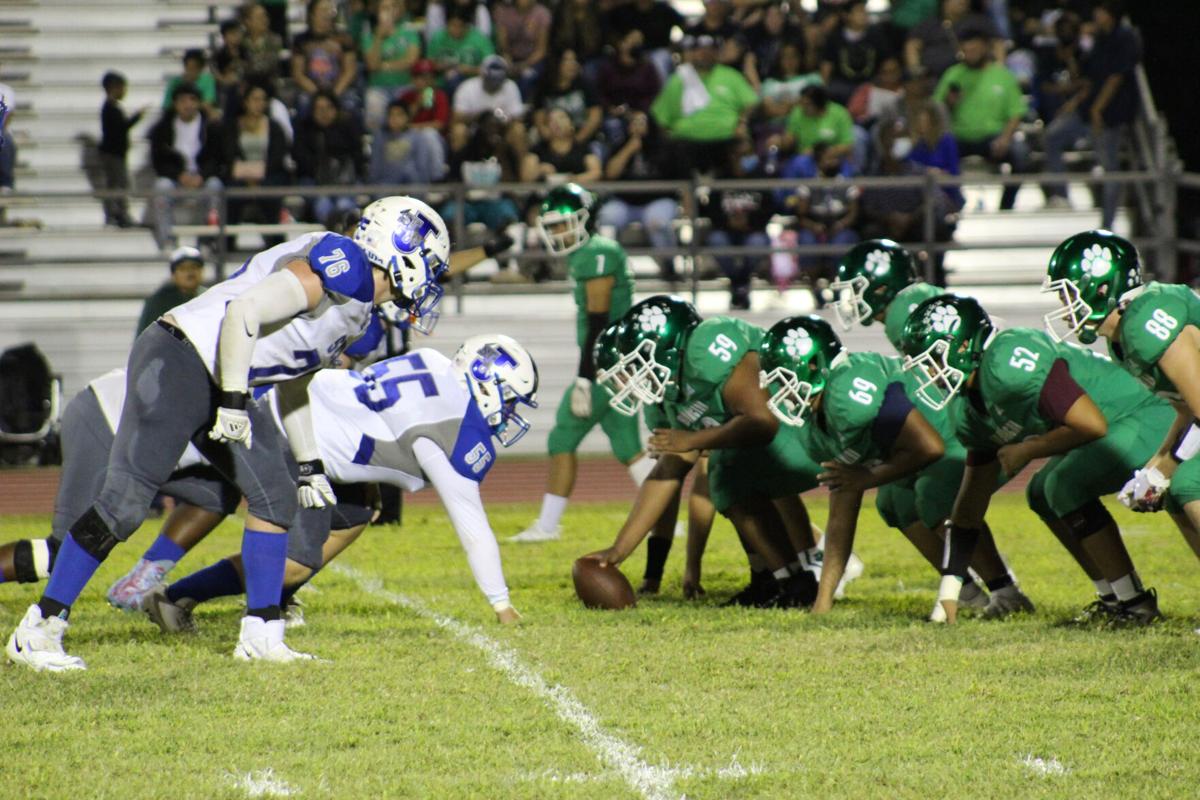 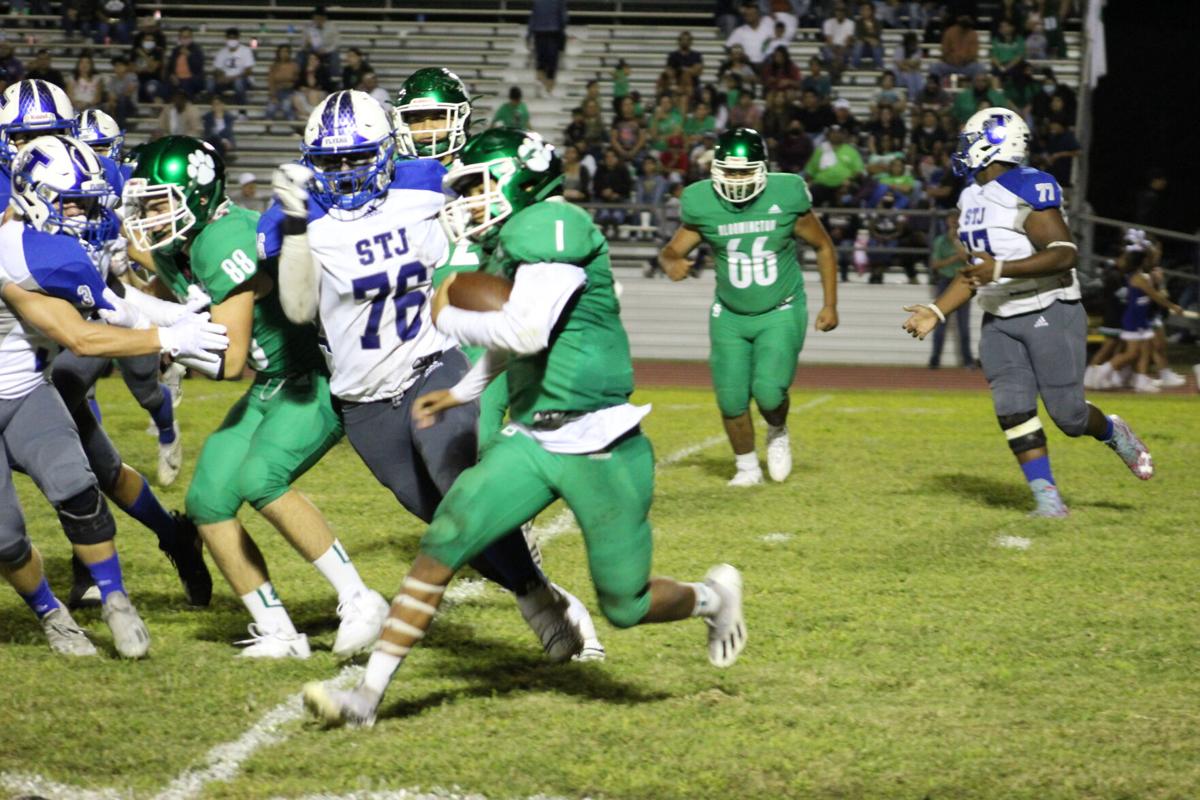 St. Joseph’s Alfredo Vazquez runs onto the field before a non-district football game at Bloomington on Sept. 25.

St. Joseph’s Gage Barrera runs with the ball in a non-district football game against Bloomington in Bloomington on Sept. 25.

St. Joseph’s Paul Mabray, John Cantu and Sam Harrell lead the defense in a non-district game against Bloomington in Bloomington.

“We had a really good week of practice,” Nelson said. “After the loss last week, we realized our practices were slow and sluggish. We came in tonight with the right mindset. We came to work.”

That hard work paid off as the Flyers cruised to a 40-0 win over the Bobcats.

St. Joseph (3-1) put together dominating performances on both sides of the ball.

Offensively, the Flyers tallied 346 rushing yards on 28 carries. The defense not only pitched a shutout, it held Bloomington (2-3) to 53 yards of total offense.

St. Joseph set the tone early when Nelson intercepted a pass on the Bobcats’ first play from scrimmage.

The Bobcats forced a turnover on downs on the ensuing St. Joseph possession.

However, Bloomington was forced to punt and the Flyers got great field position when the snap went over the punter’s head.

Nelson saw an opening on a quick trap play and ran 17 yards for a touchdown to put the first points on the board.

Nelson followed that score with a 44-yard run late in the first quarter, giving the Flyers a 13-0 lead.

Bloomington’s defense stiffened until St. Joseph’s Gage Barrera, who carried 13 times for 182 yards, scored the first of three touchdowns on a 8-yard run with 2:22 to go in the second quarter.

“Carter and Gage had big games,” said St. Joseph coach James Duprie. “The defense was stellar. We were a little shorthanded this week and we had some kids step in.”

Duprie was most pleased with the way the team was able to rebound from last week.

“I feel like if we would have played like this last week, we would be sitting at 4-0,” he said. “However, when you don’t focus on what you are supposed to do, bad things are going to happen. Going forward our goal is to keep getting better and not to backslide.”

Bloomington coach Chris Horn was disappointed with the outcome, but not with his team’s effort.

“St. Joseph is an extremely good team,” Horn said. “They are tough to handle. Their running game just wore on us. Our kids played with good effort tonight. I’m very proud of them. We were just a little outnumbered tonight.”

St. Joseph added rushing touchdowns by Barrera and Nelson in the second half. Barrera scored on runs of 54 and 40 yards, and Nelson scored on a 10-yard run.

“Our offensive line was amazing,” Nelson said. “We had a little trouble at the beginning of the game. We played together as a team, and that is how we won.”