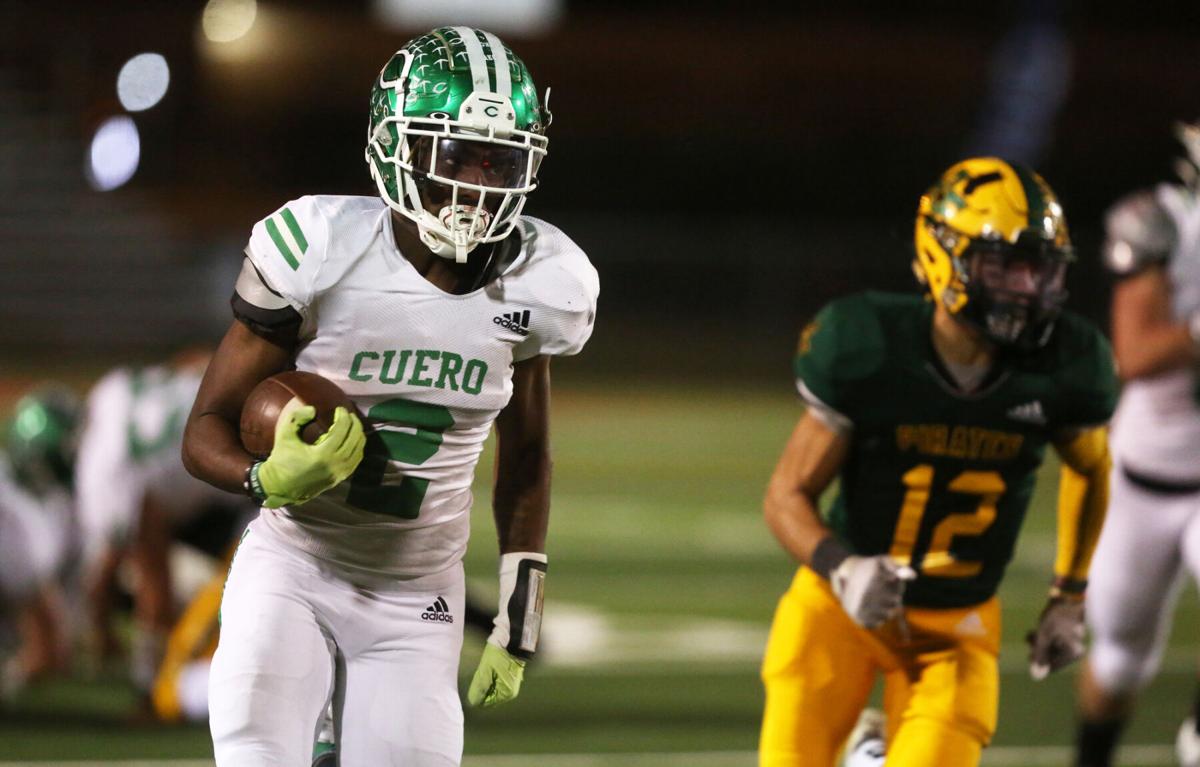 Cuero’s Tycen Williams runs the ball during a Class 4A, Division II area playoff game against Rockport-Fulton at Memorial Stadium on Nov. 19. 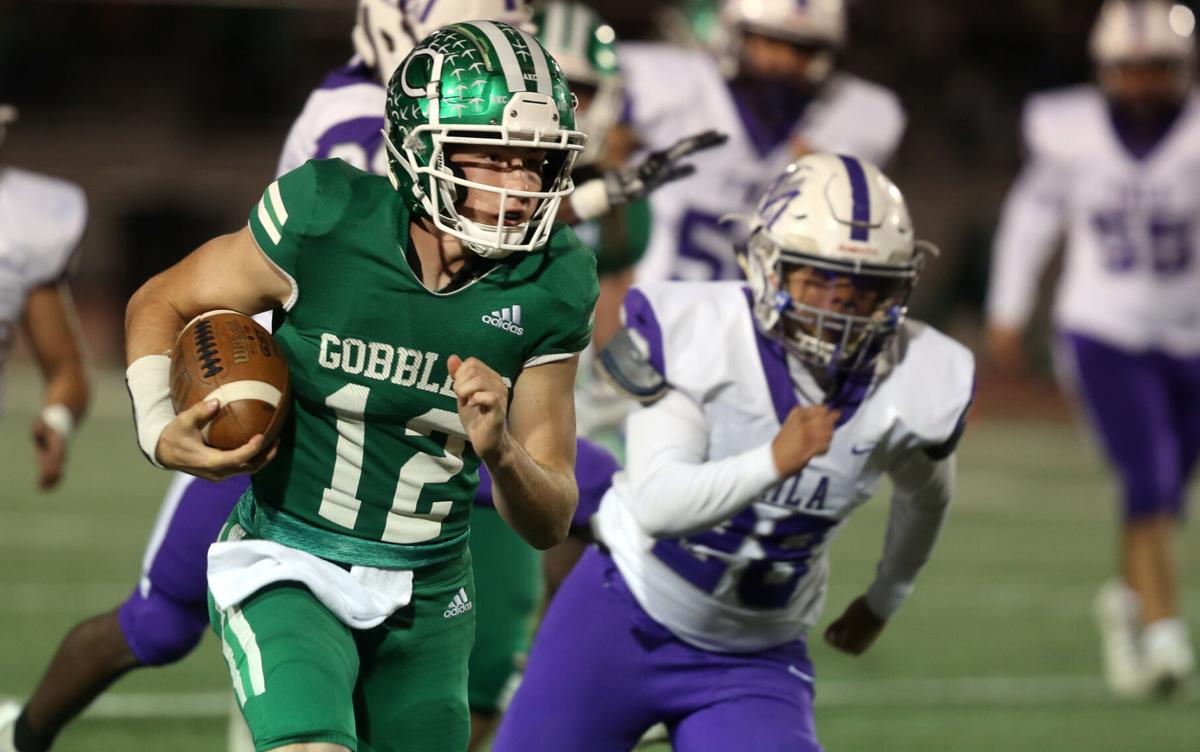 Cuero’s Jerry Rossett runs the ball during the Class 4A, Division II bi-district round against San Antonio YMLA at Gobbler Stadium on Nov. 11. 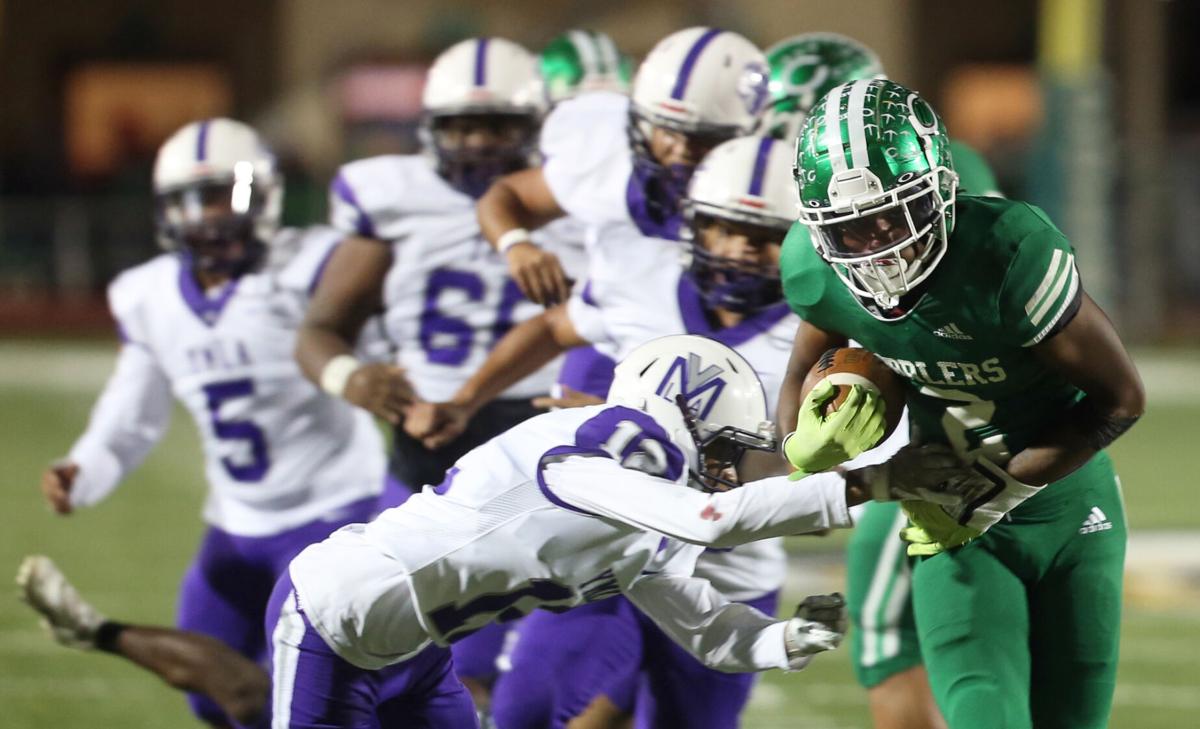 Cuero’s Tycen Williams evades the defense and runs the ball during the Class 4A, Division II bi-district round against San Antonio YMLA at Gobbler Stadium on Nov. 11.

Cuero’s Tycen Williams runs the ball during a Class 4A, Division II area playoff game against Rockport-Fulton at Memorial Stadium on Nov. 19.

Cuero’s Jerry Rossett runs the ball during the Class 4A, Division II bi-district round against San Antonio YMLA at Gobbler Stadium on Nov. 11.

Cuero’s Tycen Williams evades the defense and runs the ball during the Class 4A, Division II bi-district round against San Antonio YMLA at Gobbler Stadium on Nov. 11.

CUERO — Cuero coach Jack Alvarez couldn’t resist reaching into his East Texas past when asked about the Gobblers’ rematch against Wimberley.

“It’s hard to beat someone twice. I said that last year, too,” Alvarez said. “It’s hard to lick a log twice. If you ever lick a log once, you don’t want to do it again.”

Cuero (11-1) does want to beat Wimberley (10-2) for a second time this season when the teams meet in a Class 4A, Division II regional semifinal game at noon Friday at San Antonio’s Alamodome.

Cuero prepares for regional semifinal against Wimberley at the Alamodome in San Antonio. pic.twitter.com/CSnzKIByXg

“It’s always hard to beat a team twice,” said Cuero senior offensive lineman Jake Plunkett, “but I think we’re prepared to do it.”

The Gobblers captured a 21-3 over the Texans in Week 2 of the season.

“Everybody’s improved,” Alvarez said. “That was a Week 2 ballgame. I think we were inside the red zone three times and we didn’t do anything down there. I think we’ve improved, I think we’ve gotten better and we’re peaking at the right time. Kids are making plays on both sides of the ball and that’s all you can ask.”

Cuero and Wimberley have played six times over the past six seasons and the Gobblers hold a 4-2 edge.

Cuero’s Jake Plunkett ⁦@JakePlunkett5⁩ and the Gobblers take on Wimberley on Friday at the Alamodome in San Antonio. pic.twitter.com/Kd32EWKuSs

Cuero eliminated the Texans in the 2016 regional semifinals, and Wimberley ousted the Gobblers in the 2017 quarterfinals.

“Wimberley is always good,” Plunkett said. “We always know it’s going to be a good game when we play them. I think that’s who they are and how they play.”

The Texans have not allowed a point in playoff wins over Navasota and Ingleside.

“They’re a good team,” Alvarez said. “We’re going to have to make up our minds to go play a good game. It’s going to be a physical game, a well-coached game. They do a great job over there. I just feel like if we go in and play good, clean football and take care of the ball and all that kind of stuff, I think we have a great chance to keep on playing.”

Cuero has also been dominant in playoff wins over San Antonio Young Men’s Leadership Academy and Rockport-Fulton and hopes to continue the trend.

“We know we have a chance if we keep doing everything right,” Plunkett said. “We need to keep playing physical football, do our jobs and we’ll be fine.”

NOTES: Cuero will be the visiting team. Tickets will be $14 at the gate.