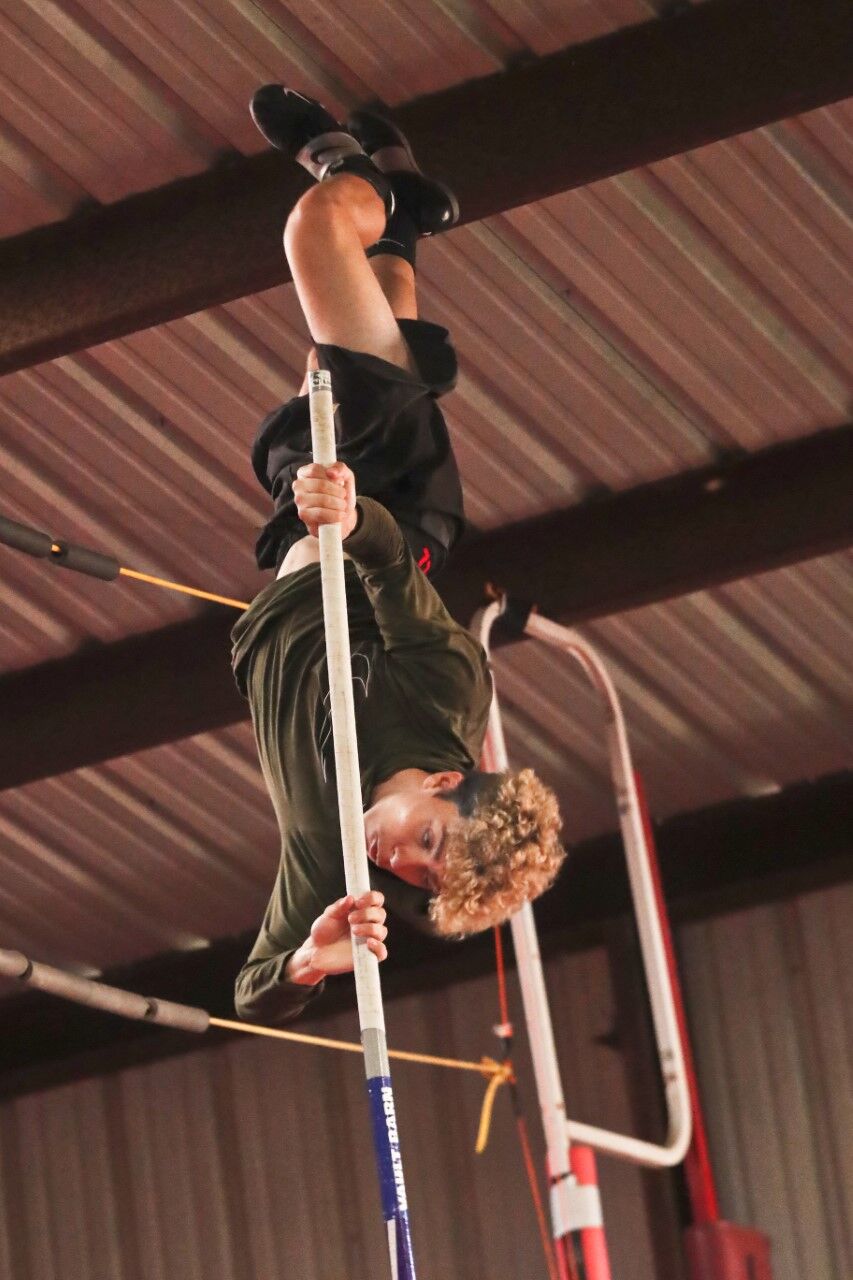 Woodsboro’s Anthony Meacham clinched the national title and became the top high school pole vaulter in the nation after his performance at the Vaulter Magazine High School National Championship in Menifee, Calif. 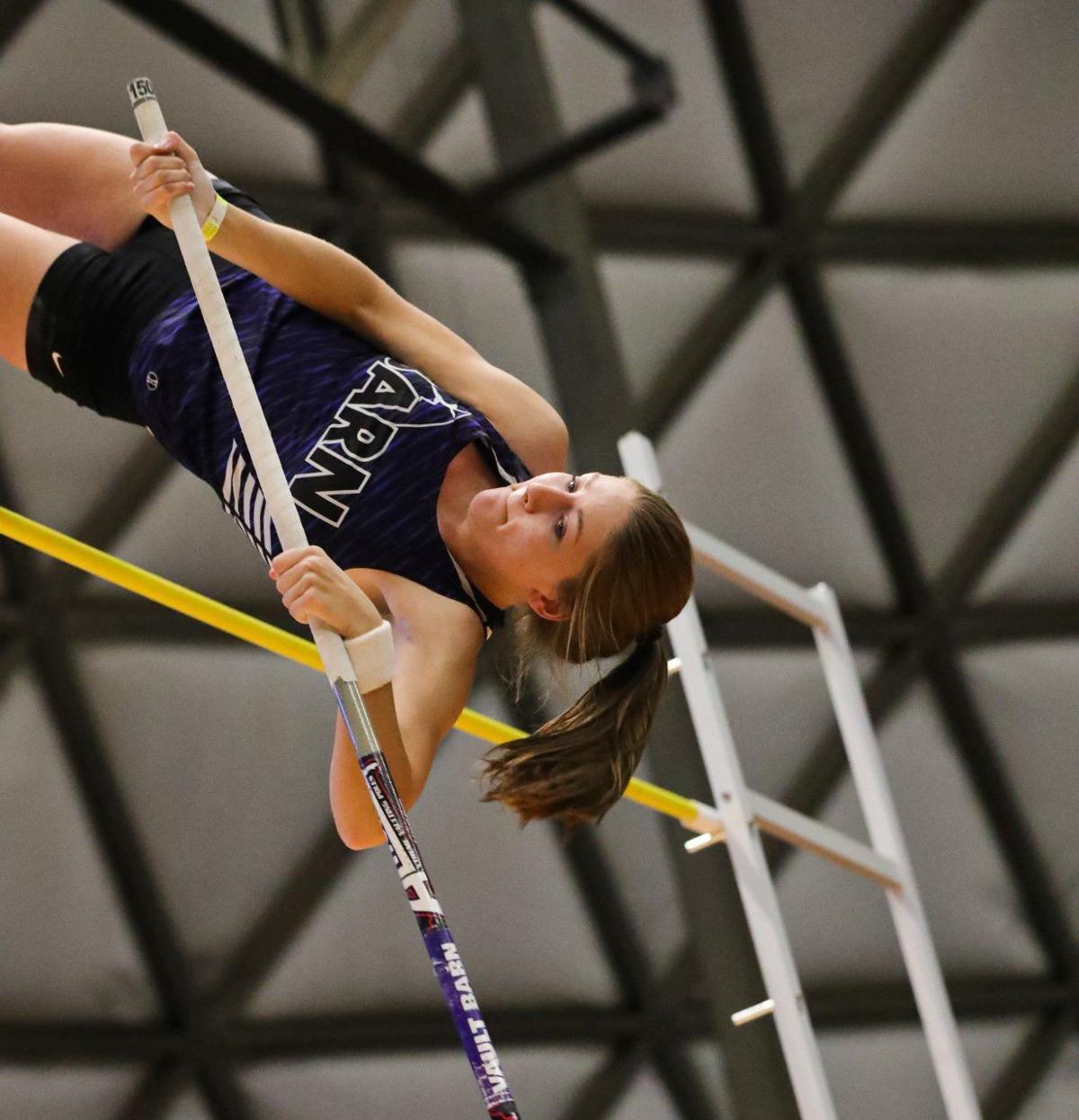 Rachael Allen, who will be a senior at Victoria East, won the Silver Division at the MAC Vaults State Championship with a personal-best of 12-6.

Woodsboro’s Anthony Meacham clinched the national title and became the top high school pole vaulter in the nation after his performance at the Vaulter Magazine High School National Championship in Menifee, Calif.

Rachael Allen, who will be a senior at Victoria East, won the Silver Division at the MAC Vaults State Championship with a personal-best of 12-6.

WOODSBORO – Anthony Meacham knew what was at stake as he stood on the runway at the Vaulter Magazine High School National Championship in Menifee, Calif.

Brown elected to pass at 17-2¼ and Meacham had to get over a bar he had not cleared before to win the championship.

“I went down to talk with Anthony,” said Kevin Hall, who coaches Meacham at the Vault Barn in Woodsboro. “He said we had come too far not to do this.”

Meacham cleared the bar on his first attempt and not only clinched the national title, but became the top high school pole vaulter in the nation in the process.

“I was pleased,” said Meacham, who will be a junior at Woodsboro. “Clearing 17 feet right now is really good for me. That’s what I want to be doing is clearing 17 consistently.”

Meacham was not the only Vault Barn competitor to bring home a title.

Layton Niemann won the junior high division in California with a personal-best of 11-7.

Rachael Allen, who will be a senior at Victoria East, traveled to College Station and won the Silver Division at the MAC Vaults State Championship with a personal-best of 12-6.

Allen was coached by Sky Hall, who won the Class 2A state championship at Woodsboro and currently vaults at Stephen F. Austin.

Meacham’s trip to California got off to a rocky start. He had never flown before and got a jolt when the plane took off in Austin.

“The first time, Kevin told me, ‘You’re going to feel a lot of pressure coming down the runway,’” Meacham recalled. “I said, ‘It can’t be that bad.’ Once the plane took off, I just got sucked back in my seat and I started to get dizzy.”

“I’ve said this a million times,” he stated. “I’ve been vaulting against high school kids since I was in middle school. Everything has become comfortable to me. I’m not ever going to be nervous because when you get nervous that’s when you jump your lowest.”

Meacham missed at 17-7, but still has his sights on the overall UIL state record of 18-3¼.

“I can feel myself getting really close to it,” he said. “At that 17-7 attempt, I felt really good and looked like I had some clearance to it. It just wasn’t the day for it.”

Allen wasn’t sure how she would fare after sitting out for months because of a case of shin splints.

Rachael Allen(Victoria East)Double PR, 12 & 12-6. You knew it was coming. She never let the frustration of missing 12’ -10 times in competition get her down, and the month off for rehab. PAID OFF TODAY!!!!13’ is NEXT @advosports @TTFCA @VaulterMagazine pic.twitter.com/uPMBkdg2mr

“I was not expecting that at all,” she said. “I was really motivated to jump really good because I didn’t get my UIL season. I just hit everything, worked with it and it paid off.”

Allen went through some struggles after her injury, but was able to persevere.

“At first, I was doing really well,” she said. “Then, I messed up and couldn’t take off and I was running through on everything so they sat with me and talked me through it. I just got through it one day.”

Allen attributes much of her improvement to the weight training and gymnastics she did while she was unable to vault.

“I was a little nervous because I hadn’t done it in a while,” she said. “But it’s so much muscle/memory and it just comes back.”