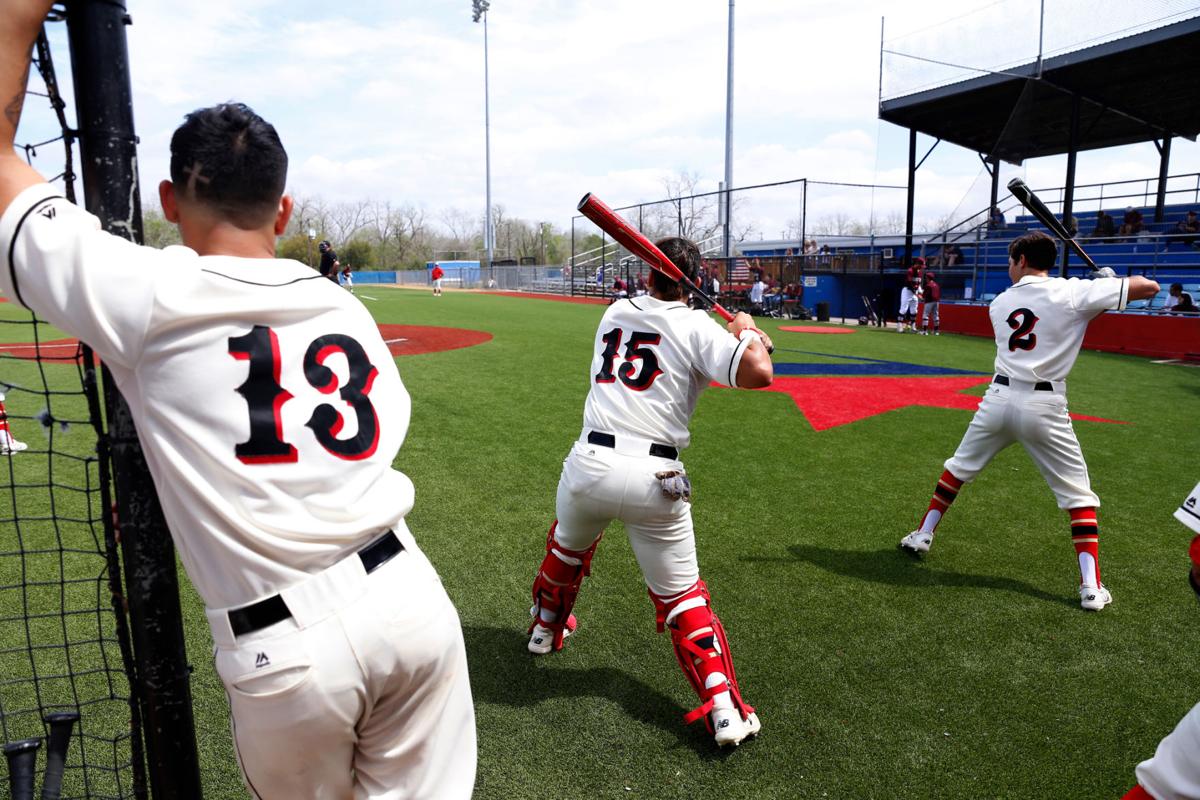 Victoria East’s baseball players warm up before they go up to bat during the game against Sinton during the first day of the VISD Tournament at Riverside Stadium. 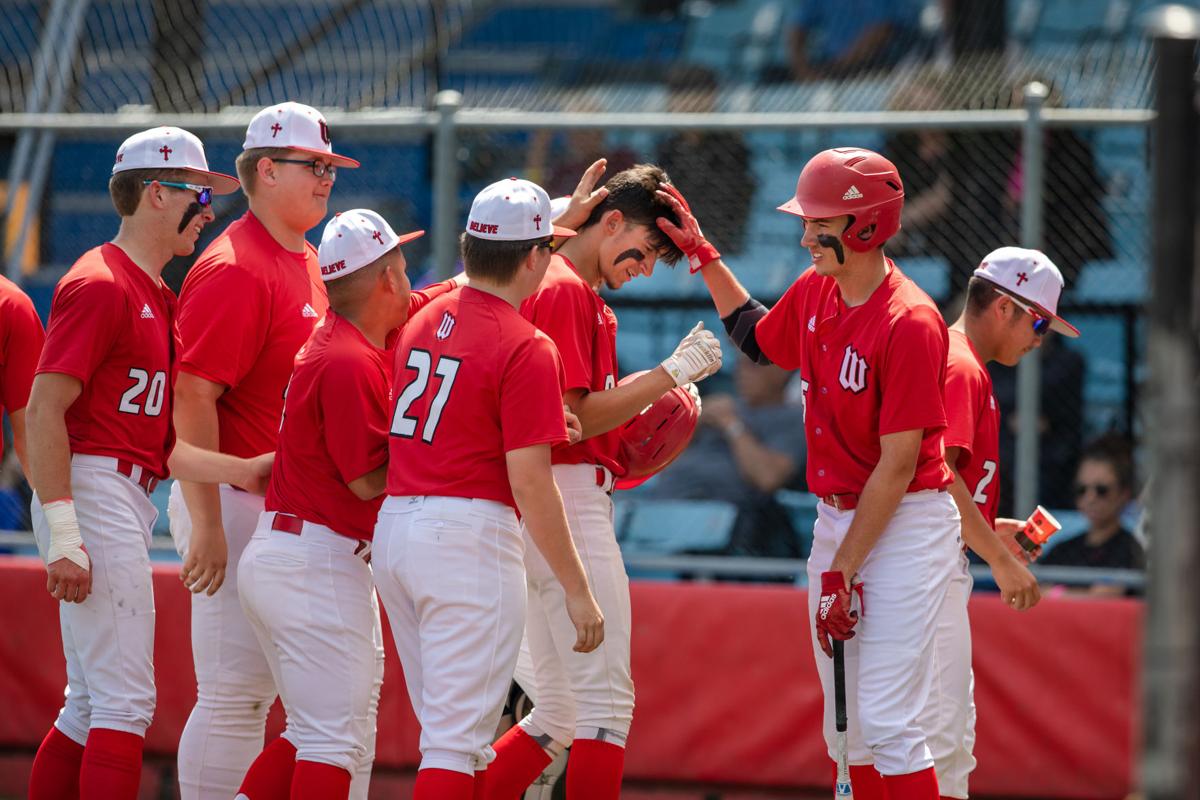 Victoria East’s baseball players warm up before they go up to bat during the game against Sinton during the first day of the VISD Tournament at Riverside Stadium.

The Titans had missed the playoffs for the first time in 2019, losing a tie-breaker for fourth place in district with Corpus Christi Moody.

The team began the season 3-0 in district and head coach Wes Kolle was excited at the Titans chances to make a playoff run.

But in the end, the COVID-19 pandemic ceased all athletic competitions across the country and Kolle could only watch as 11 seniors graduated, many of them to begin their college careers.

“This group, the ‘21 group has carried the debt that the class of 2020 had,” Kolle said. “We had a talented senior class last year, guys that really bought into our program and were tremendous leaders and ambassadors of Titan baseball. For them to not be able to finish their season was disheartening, but we’re picking up and running with the torch this year to get back on the field.”

Among the seniors lost were Matthew Gomez, Kevin Rodriguez and Zach Shannon, the Titans top three hitters at the break.

But the Titans return a core group of veteran leaders, among them four-year starters in catcher Cory Cann and pitcher Marquise Kuykendall, as well as senior pitcher De’Everett Ross, who pitched the final game of the season, a 9-2 win against Victoria West in the VISD Tournament.

“We have kind of like a new breath, new life,” Cann said. “Everyday we come out here, we have fun, we get to play the baseball game we love, thank God for that. I can’t wait for the season, I can’t wait for that crowd, that atmosphere at Riverside again if we get one.”

A number of sophomores also saw playing time last year, notably junior Kaiden Kolle who was second on the team with a .324 batting average.

East will rely on its entire roster this season as it competes in a tough District 29-5A. Gone are Calhoun and Corpus Christi Miller, but in come Flour Bluff and Gregory-Portland, the No. 10 team in THSBCA’s Class 5A rankings.

East opens the season against Corpus Christi Carroll at Cabaniss Stadium on Monday.

“We want to stay focused on the next 200 feet,” Kolle said. “Be present, be in the moment, get better today. We know the district that we’re in, we know it’s going to be a battle each and every night, but we want to be one percent better tomorrow than we were today.”

The Warriors come into this season feeling they have been picked to finish too low in District 29-5A and the team is determined to prove they have what it takes to compete for a playoff spot.

“We have a great group of really talented guys, experienced guys who have been playing together since we were little and I think that gives us an edge that others don’t,” said senior outfielder Jose Aguilar. “Our mission this year is to go out there and shock some teams. We want to show them who West is as a baseball group.”

The Warriors graduated nine players after last year’s shortened season but return a large senior class of 14 and every senior wants to make it a special year.

Gone are Bryce Sitka and EJ Rodriguez, who both hit over .400 last season and were cornerstones in the lineup, but the Warriors return Colten Matus, Jace Mitscherling and Blane Zeplin, who will be the No. 1 in the pitching rotation.

“We feel like we were just getting to where we wanted to be when the season was called off last year, and we had a lot to prove,” said Matus, a corner infielder and pitcher. “This year we want to fulfill what the seniors last year weren’t able to, we are stepping into their shoes. We have good chemistry and I feel like we can be one of the best team’s in the district and prove everyone wrong.”

“My job is just to go out and try to dominate every time I’m given the ball,” Zeplin said. “I have to be toned in on the mound and try to block out all the noise, if I do that and our offense does what it can do we’ll do good.”

West head coach Manual Alvarado has also been impressed with what he has seen out of senior second baseman Adam Diaz, senior shortstop Blake Buzzell and centerfielder Orlando Di Leo.

“Its always good to have competition,” Alvarado said. “Everyone wants to start but you have to go out there and compete and these guys do that. They know that not everyone is going to be able to play every inning and when you get in you have to produce. I feel really good about the nine guys we can put out there any day and the depth on the team.”

Making it to playoffs will be tough for any team and Alvarado knows that good teams will be left out of the mix in what he calls one of the toughest districts in the state. But he is confident in his teams chances.

The Warriors will open the season Monday against Flour Bluff. Because of this weeks freeze, the team was only able to play one scrimmage before the start of district play.

“Those scrimmages would have helped a lot,” Zeplin said. “But we all are dealing with the same thing and we just want to get into live action. We’re ready, locked in and want to make a run.”