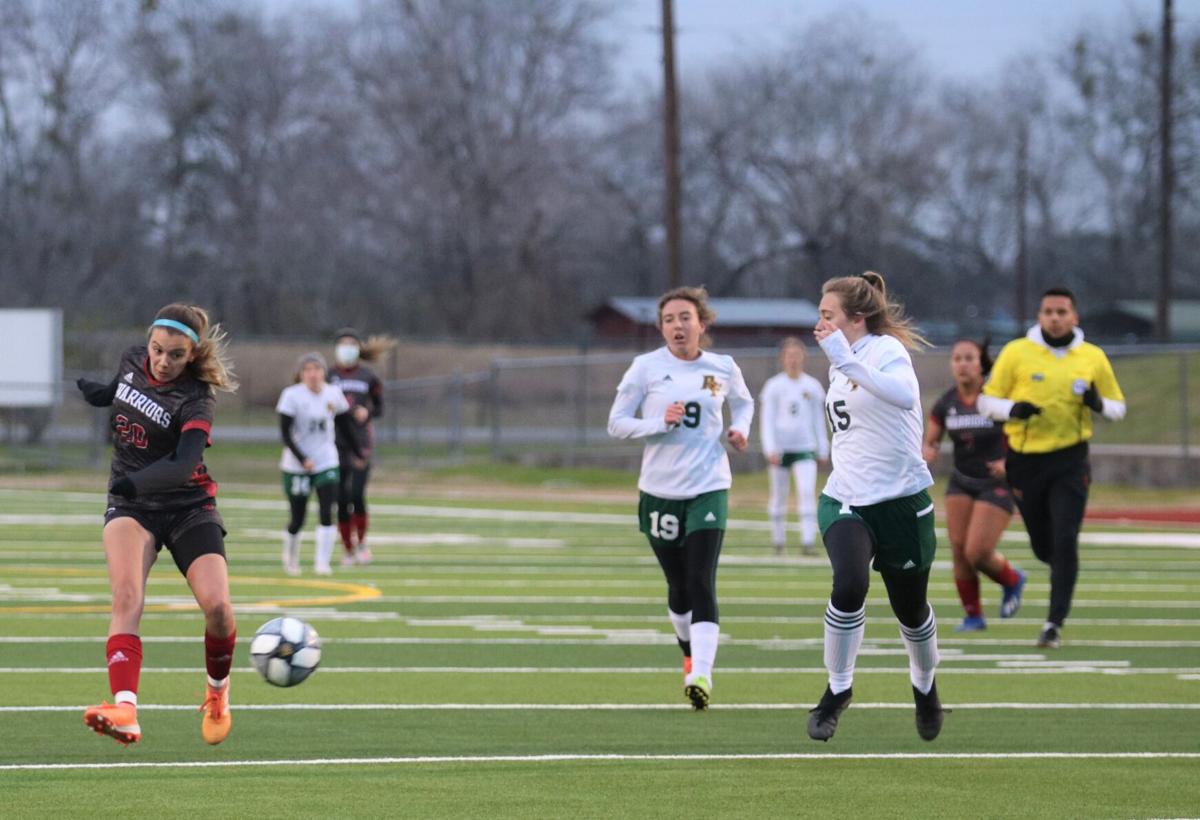 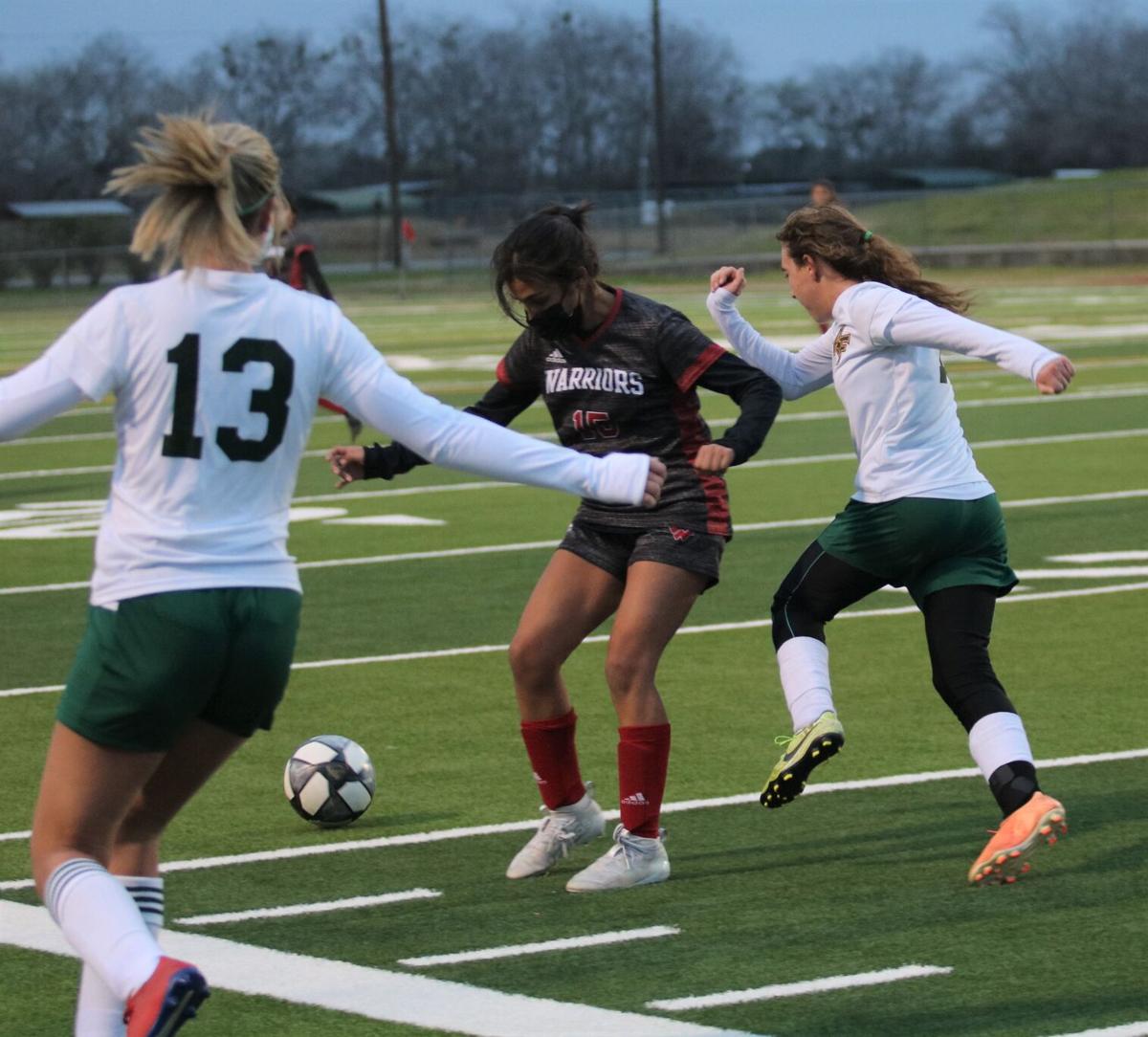 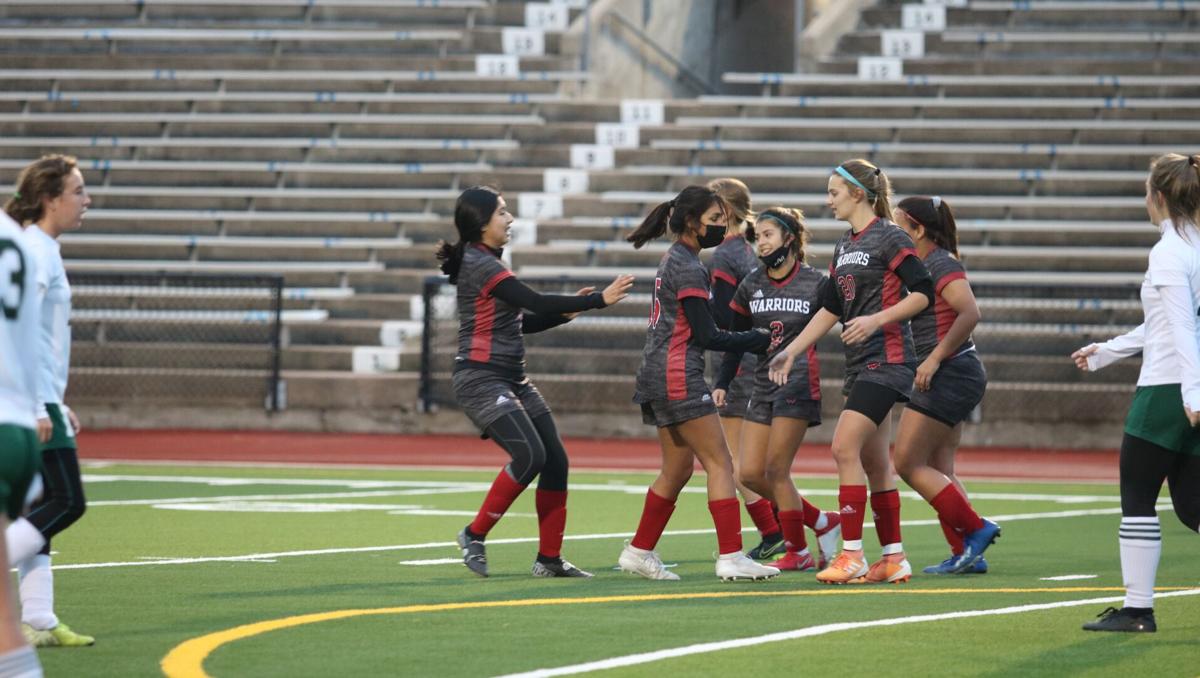 Victoria West's Skylar Shaffer celebrates with her teammates after scoring a goal against Rockport Fulton during Tuesday's non-district match at Memorial Stadium. 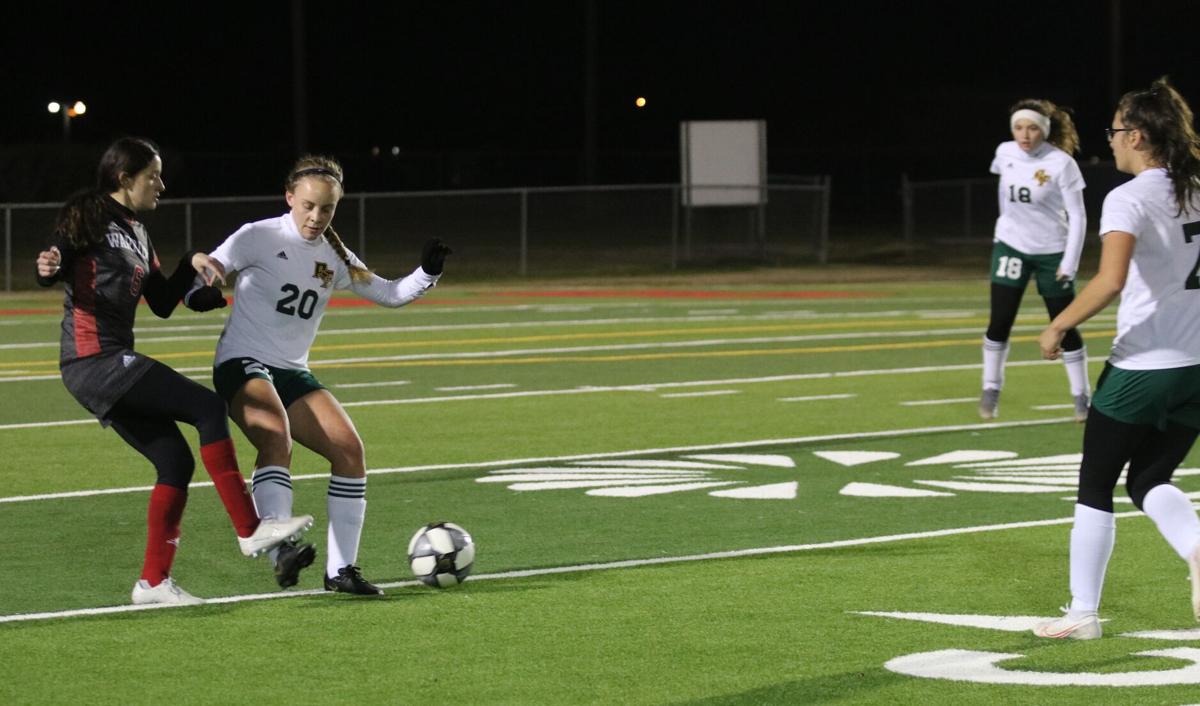 Victoria West's Skylar Shaffer celebrates with her teammates after scoring a goal against Rockport Fulton during Tuesday's non-district match at Memorial Stadium.

It’s back to normal for Victoria West this year.

Last season was plagued by injuries and the looming COVID-19 pandemic, as no one knew when or if team’s would be able to continue to play before all spring UIL Sports were cancelled directly before the start of soccer playoffs.

The Warriors, who narrowly missed the playoffs last season, have many returners this year and having that continuity is something that the group is looking forward to.

“There really is just a good connection between this group and how we play as a team,” said sophomore striker Skylar Shaffer. “We play as a team. We work with the ball and find each other like we’ve been playing together our whole lives, and it’s just great to be a part of this group.”

Shaffer is one of those returners and helped spearhead the Warriors (3-0-1) to a 5-2 non-district win over Rockport Fulton on Tuesday at Memorial Stadium with two goals and an assist.

“I just had to keep my line and be aggressive,” Shaffer said about the two goals. “I just had to keep pushing their backline and that’s all there was to it. I did that, kept the ball in front of me and had the composure to score the goals.”

Rockport Fulton struck first in the match on a long strike from Kaelan Whidden to go in front, but West responded 10 minutes later as Shaffer scored the first of her two goals. Shaffer then assisted on West’s next goal, crossing the ball to the edge of the box for Jadyn Rangel who struck it first time to put the Warriors ahead going into halftime.

“I was really impressed with the response we had to that first goal,” said West head coach Courtney Stoltenberg. “I feel like in years past that would have put a damper on things and we would really have to fight back into it, but they came back at it full force and they didn’t let that goal get in their way.”

Shaffer didn’t take long to make an impact in the second half, as she scored her second in the 45th minute before Whidden trimmed the West lead to one with her second goal of the night.

Anneliese Covarrubias put the Warriors back up by two just a few minutes later, as she turned a Rockport defender before putting the ball into the far post. And Cami Patek sealed things with a goal of her own in the 75th minute.

“We really want to go hard and be aggressive with our front line,” Stoltenberg said. “In the past I think we’ve had trouble offensively because we haven’t been able to finish and haven’t been aggressive. We’ve hammered that practice after practice and I really think it’s coming through.”

With district 29-5A play starting next week, the team doesn’t have much more time to prepare before meaningful games start.

“From first day of practice to now has made a world of difference,” said senior Kanella Cohen. “Practice brings confidence, and you feel more prepared out on the field. The communication has gotten a lot better as well, and we’re just more comfortable calling for people and talking to everyone freely. I feel like we can only get better and I’m excited.”

The group feels like they have what it takes to make it back to the playoffs this year and that starts next week, with their district opener against Corpus Christi Moody on Jan. 22.

“We just have to keep practicing and going at it everyday,” Shaffer said. “We have to keep getting better with our communicating, be aggressive in practices and make sure we don’t be complacent.”