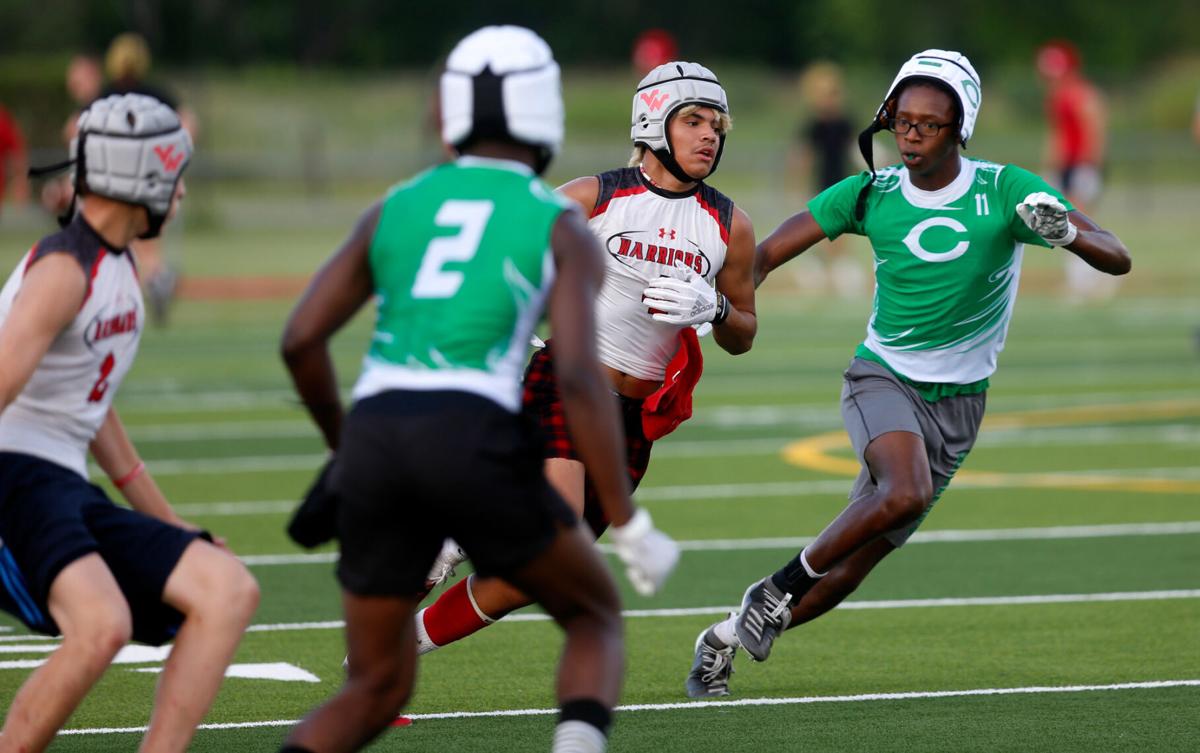 Victoria West’s D’Andre Fillmore rushes past a defender during Tuesday’s 7-on-7 game against Cuero at Memorial Stadium. 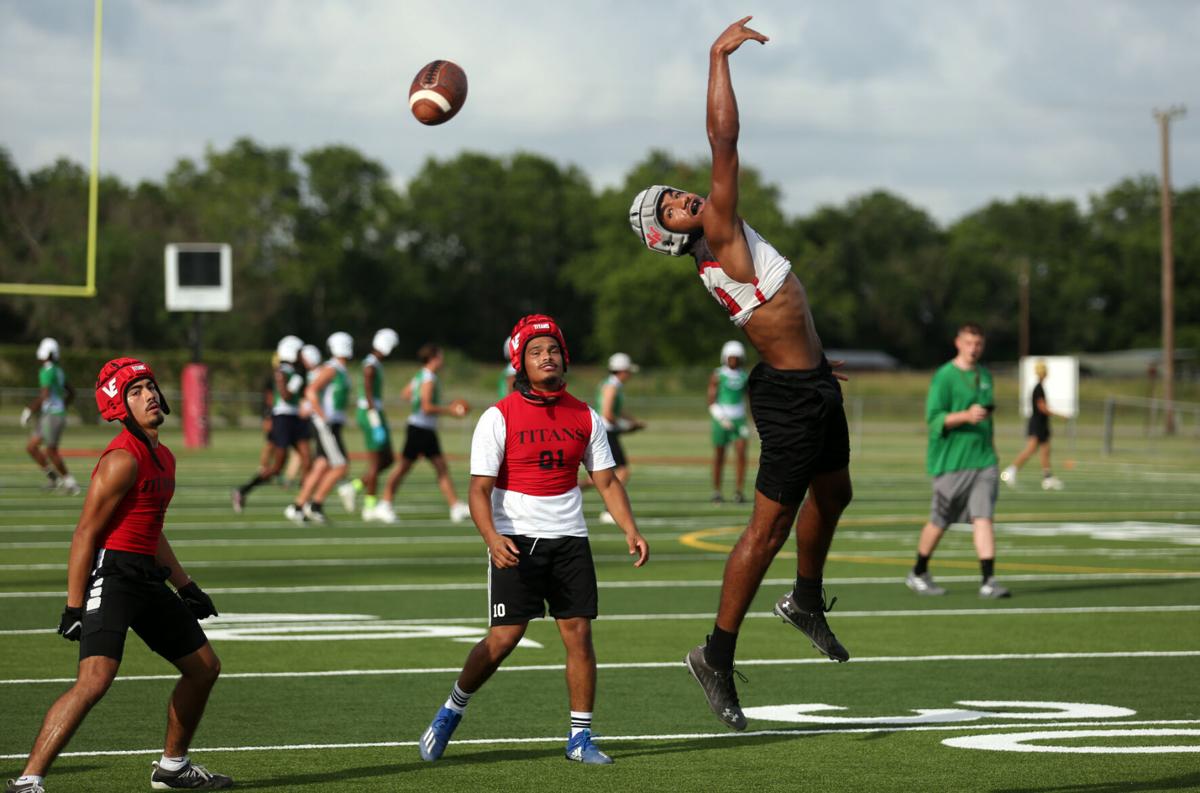 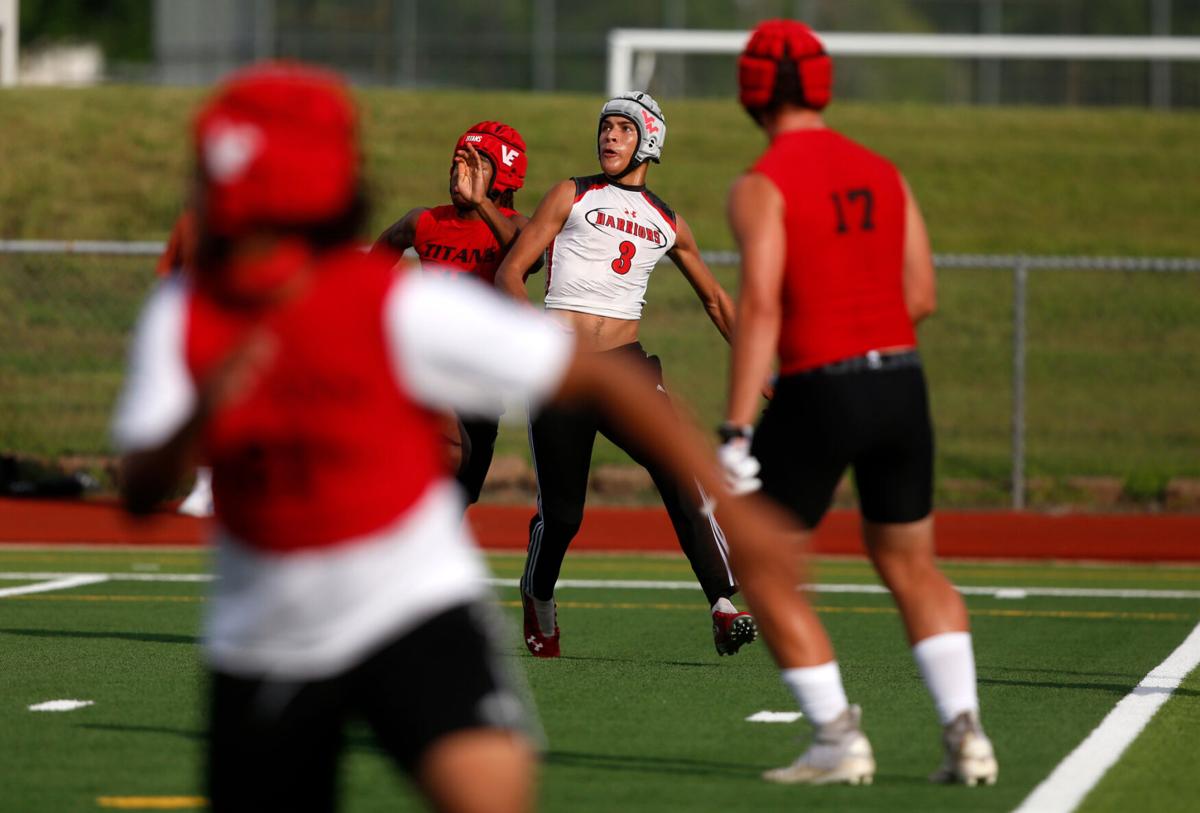 Victoria West’s Patrick Cates keeps his eyes on the ball during Tuesday’s 7-on-7 game against Victoria East at Memorial Stadium.

Victoria West’s D’Andre Fillmore rushes past a defender during Tuesday’s 7-on-7 game against Cuero at Memorial Stadium.

Victoria West’s Patrick Cates keeps his eyes on the ball during Tuesday’s 7-on-7 game against Victoria East at Memorial Stadium.

Patrick Cates found it hard to explain how excited he was to be playing 7-on-7 this summer.

After having strength and conditioning postponed last year and 7-on-7 canceled, it meant more to Cates than he had realized to get it back this summer

“It’s amazing being out here and competing,” Cates said. “It’s just pushed me to be better. I’m putting my head down and I’m getting dirty working as hard as I can everyday. It’s all about grit and that’s what doing strength and conditioning and then coming out here in the afternoon does for you, cause when you’re tired and pushing, that’s when you really improve.”

Cates made a number of big catches during the first day of 7-on-7, including a 2-point conversion at Memorial Stadium on Tuesday, helping West to a 14-7 win over Victoria East in their first game.

“Patrick and Zach Sanchez both had some really big catches and it shows how much both of them are improving,” said West head coach Courtney Boyce. “The quarterbacks getting to come out here and see the speed of the game and how it’s faster it’s really good for them. Them being together and building that chemistry and relationships is the most important thing, and it makes the guys face adversity, which is going to help them.”

The Warriors faced some of that adversity Tuesday as they lost their second game of the day 28-0 to Cuero. Despite not having all of their best players out for the games, the team knows there’s things to improve on.

“It helped build that chemistry, that’s the biggest thing it did of us and it also let us know what needs to be fixed,” Cates said. “We had a pretty decent game against East that we won but then we got dusted by Cuero. Cuero’s a good team with a lot of athletes, we just have to communicate more, we were silent a lot and they ran a lot of good routs that were busting our coverage.”

D’Andre Fillmore will take on a larger role on defense next season at safety and thinks that 7-on-7 will help him develop before the season.

“I’m gonna be out here as much as I can because this helps me get a lot of work in and understand the defensive side of the ball better,” Fillmore said. “I know I need to get better at safety and I’m gonna put in the work.”

West will play in the Division I state qualifying tournament this weekend and be in group E along with Flour Bluff, Laredo Alexander and Weslaco at Ray High School in Corpus Christi. They will then be back in action playing another round of 7-on-7 next Tuesday at Memorial.

“It’s been a great response from these guys,” Boyce said. “What they do in the mornings in strength and conditioning is not easy and that’s what impresses me about them, they’re putting in the work. They’re doing a lot of things this summer and I’m just happy that they’re getting to do it.”

Gallery: 7-on-7 Football at Memorial Stadium