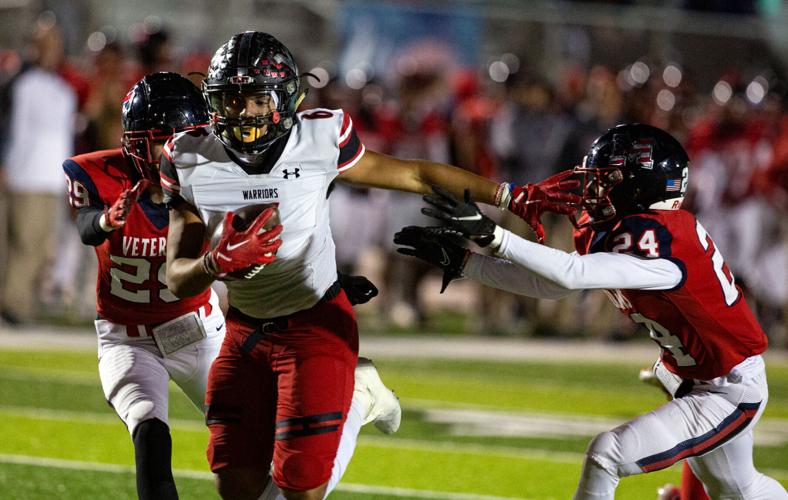 Victoria West’s D’Andre Fillmore runs the ball in for a touchdown during Thursday’s area round game against Brownsville Veterans Memorial at Cabaniss Stadium. 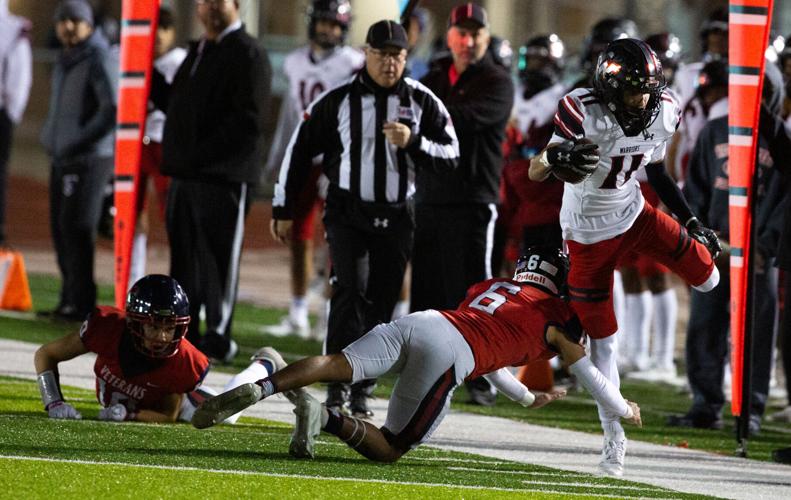 Victoria West’s Zachary Sanchez runs out of bounds during Thursday’s area round game against Brownsville Veterans Memorial at Cabaniss Stadium. 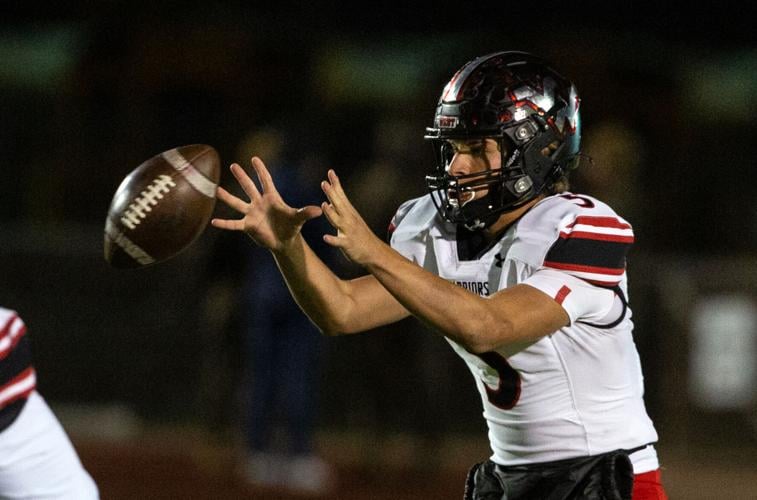 Victoria West’s D’Andre Fillmore runs the ball in for a touchdown during Thursday’s area round game against Brownsville Veterans Memorial at Cabaniss Stadium.

Victoria West’s Zachary Sanchez runs out of bounds during Thursday’s area round game against Brownsville Veterans Memorial at Cabaniss Stadium.

CORPUS CHRISTI — Victoria West wasn’t expecting a track meet, but got one.

“We just couldn’t keep up. We left it all on the field and did our best,” said senior receiver Jeremiah Baldwin. “Our whole team ended up coming up short. It’s something we have to live with.”

The Warriors didn’t have an answer for Chargers’ senior running back Bryan Chavez, who rushed for 429 yards and nine touchdowns to put Veterans Memorial into the regional semifinal next week against either Corpus Christi Miller or Pharr-San Juan-Alamo North.

West (6-6) had three days to prepare for Veterans Memorial’s triple option offense and were without senior linebacker Jaxx Rangnow.

“It definitely had an effect,” said senior linebacker Clayton Sciba. “It’s just not the same going up against JV players as it is going up against the real thing. Their linemen were fast, too. I was on the ground almost every play.”

Chavez had 17 carries for 212 yards and four touchdowns to put the Chargers up 41-23 at halftime. His nine touchdowns puts him in a tie with 12 others, including former Hallettsville running back Jonathon Brooks, for the fourth-most touchdowns in a single UIL 11-man game.

“I wasn’t trying to go for that,” Chavez said. “Scoring touchdown after touchdown, I didn’t even think about it.”

West senior D’andre Fillmore had his own career night in the loss with six catches for 223 yards and five touchdowns.

“I thought we had a good chance,” Fillmore said. “We just had to keep scoring. It just didn’t happen with this game.”

Four of Fillmore’s touchdown receptions were 30 yards or more, including two over 60 yards.

“The thing about Fillmore is watching him continue to work to get better, just never being satisfied,” said West head coach Courtney Boyce. “Obviously he’s a big, big key with our offense. Just shout out to our seniors, the leadership and resiliency from the beginning of the season throughout.”

Veterans Memorial scored touchdowns on 11 of its 12 possessions, with the 12th running out the clock. The Warriors scored touchdowns on their first three drives, but settled for a field goal inside the red zone on the fourth and punted on the fifth to close out the first half.

West had an opportunity to keep pace with Veterans Memorial on third-and-goal from the Chargers’ 1-yard line with 4:30 left in the first half, but a false start and an incomplete pass led to a 23-yard field goal by senior Armando Rojas.

“At the end of the half, it’s a small part of the game,” said West head coach Courtney Boyce. “That’s when we allowed them to stretch out the lead and then it was kind of back and forth from there.”

Junior quarterback Camden Repper opened the game by completing nine of his first 13 passes, including each of his first four with touchdown passes of 63 and 37 yards to Fillmore in the first quarter.

He finished the game 20 of 29 passing for 412 yards and six touchdowns, both season-highs. Repper also added a 3-yard touchdown run in the first quarter.

Junior running back Kamauri Montgomery had carries for 114 yards and a touchdown.

“Our kids were fighting their tails off,” Boyce said. “They do a great job, just the hiccups. In this type of game, it’s gonna catch up to you. Hats off to (Veterans Memorial) and hats off to our kids for fighting.”

Sam is the Assistant Sports Editor with experience covering high school sports in West Texas, South Texas and anywhere in between. Sam graduated from Angelo State University in 2017, where he also featured as a punter on their football team.