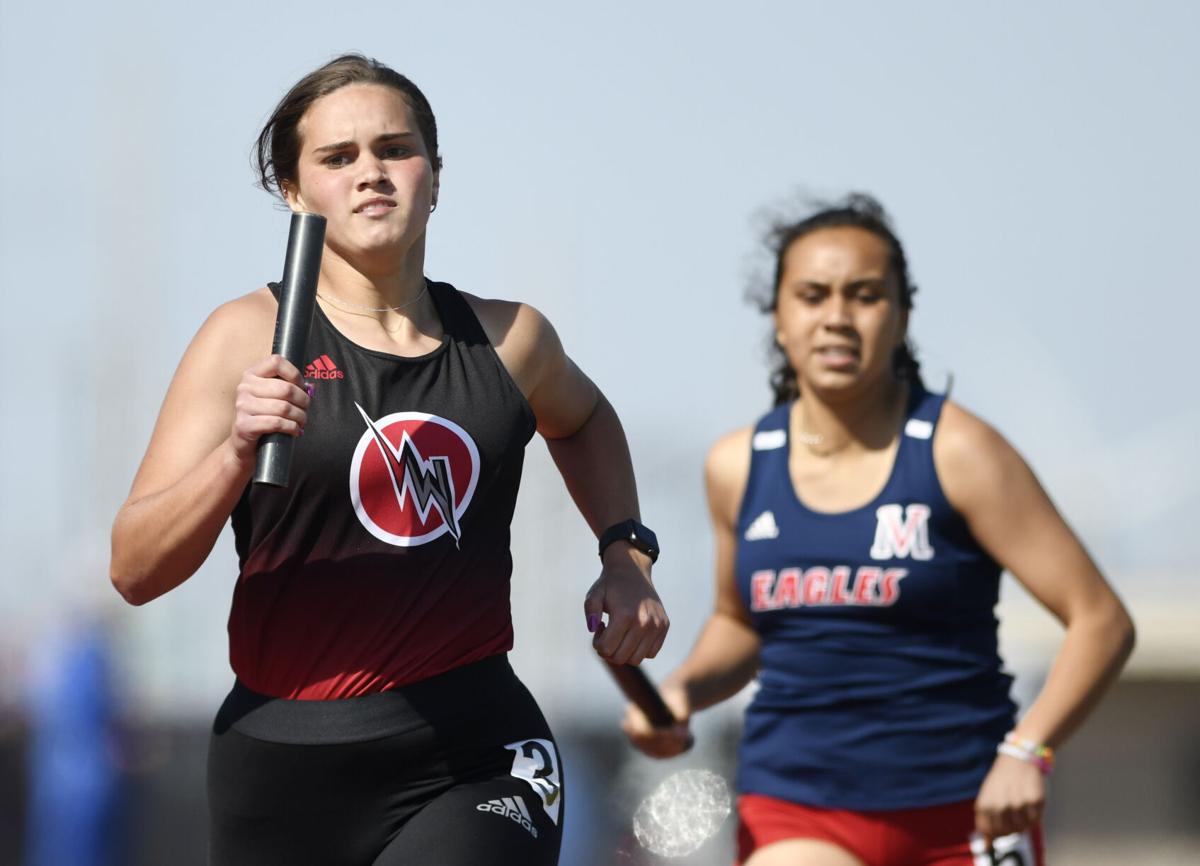 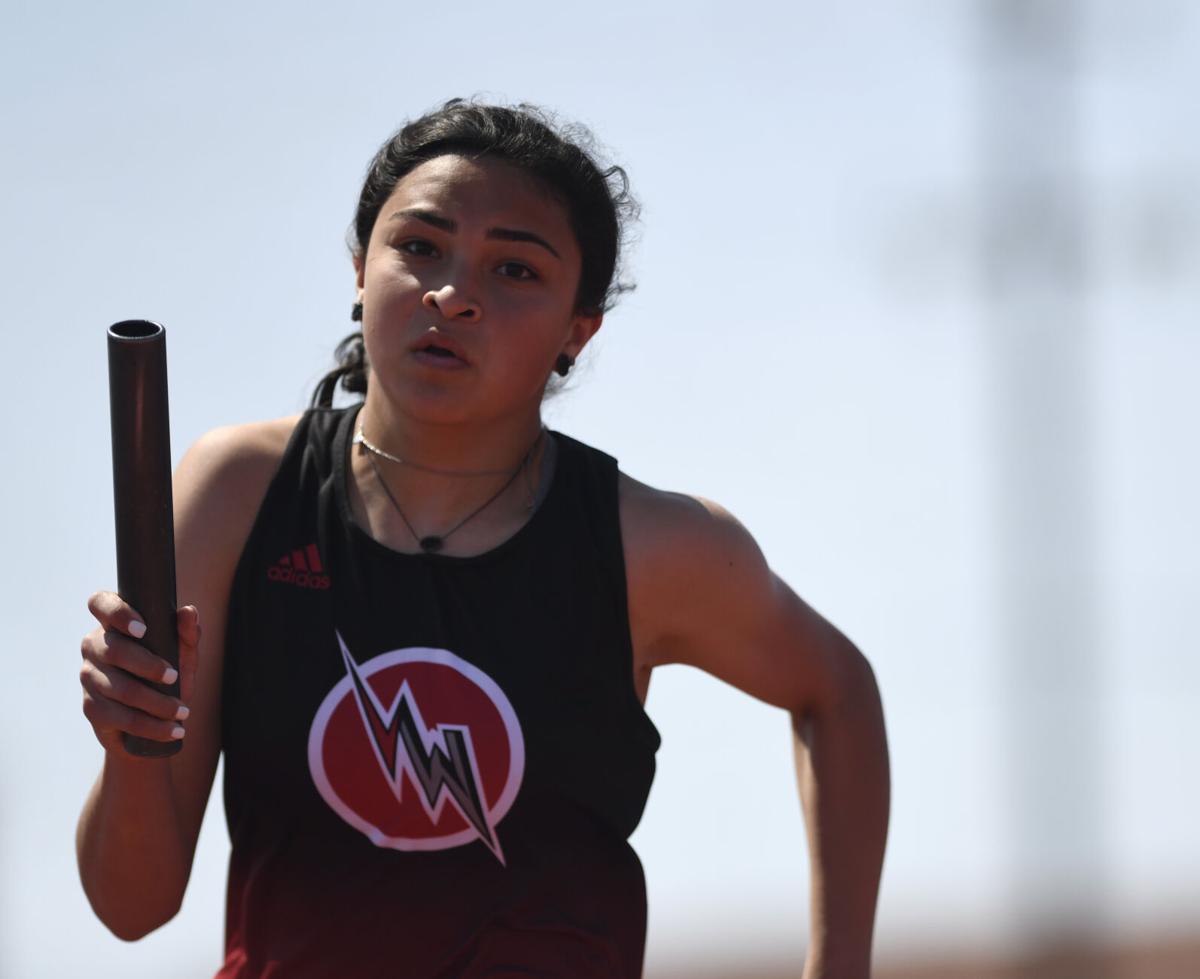 Victoria West’s Daidree Zarate runs a leg in a relay race on Thursday during the District 29-5A track meet at Gregory-Portland. CCISD schools, Flour Bluff, Gregory-Portland, Victoria East and West competed in the events. 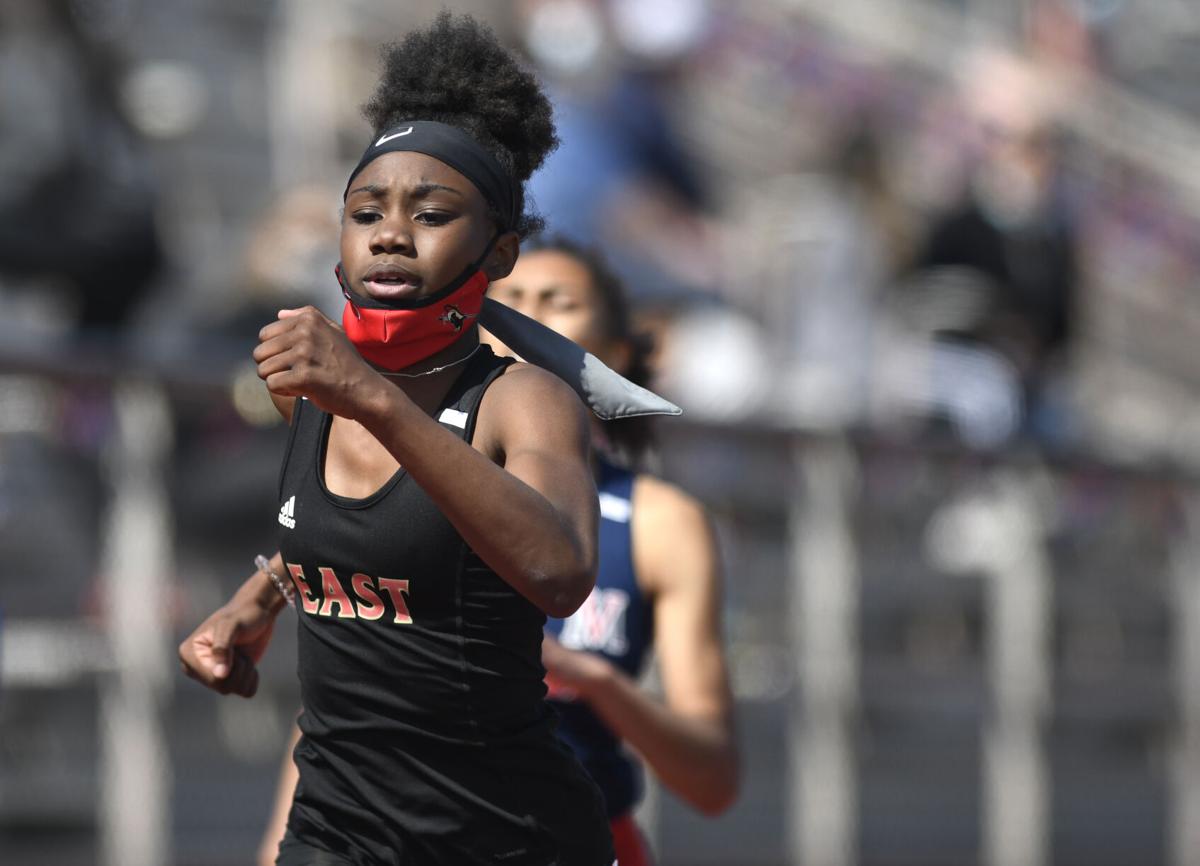 Victoria West’s Daidree Zarate runs a leg in a relay race on Thursday during the District 29-5A track meet at Gregory-Portland. CCISD schools, Flour Bluff, Gregory-Portland, Victoria East and West competed in the events.

PORTLAND — Sawyer Broughton knew she had ground to make up when she got the baton for the anchor leg of the girls 1,600-meter relay.

Broughton had to catch the Corpus Christi Veterans Memorial anchor after the Lady Eagles had gained separation on the second leg.

Broughton passed the Veterans Memorial runner on the home stretch, winning the relay title for Victoria West in 4 minutes, 10.75 seconds in the final event of the District 29-5A meet.

“I was just thinking what our coach said, ‘Push, finish, just get the stick around the track,’” Broughton said. “I was just feeling all the energy cause I heard my teammates, I saw my teammates, so I was just pushing for them.”

The relay victory helped the West girls finish fourth as a team with 72 points. The Warriors had three individuals and two relays teams advance to the area meet.

Dailynn Zarate and Alexis Holmberg were the third and fifth high-point performers with 23 and 20 points, respectively.

After advancing in the field events Wednesday, Zarate and Holmberg finished second and fourth in the 400-meter dash — running 1:01.69 and 1:02.34, respectively — and helped the 400-meter relay team finish third in a time of 51.92 seconds.

“We’re happy for each other, we know that with all our hard practicing it’s worth it and we’re just ready for area,” Zarate said. “I told (Alexis) after the race that I’m happy she’s coming with me, it just helps me feel better knowing I have a teammate beside me.”

“I knew if I was basically doing everything right then I should be good,” Randle said. “I’m feeling good, I just have to keep going, keep improving.”

Logan Cooper ran 42.46 seconds to finish fourth in the 300 hurdles.

“It’s great just to see my friends, my brothers succeed,” Williams said. “Just getting to see them fulfill their dreams and get to move on from district and try to win every race they possibly can. It’s honestly better than winning, watching your friends win.”

East’s Evan Brown finished second in the 300-meter hurdles with a personal best time of 40.41 seconds.

“It feels good,” Brown said. “It gives me a mark to go after in area, so I’m just gonna have to keep working faster and faster if I want to keep going into the next round.”

Brown also placed third in the 110 hurdles, running 15.59 seconds, a time he said he can improve on.

Brown and Garis helped the 400 relay team finish fourth with a time of 44.61 seconds.