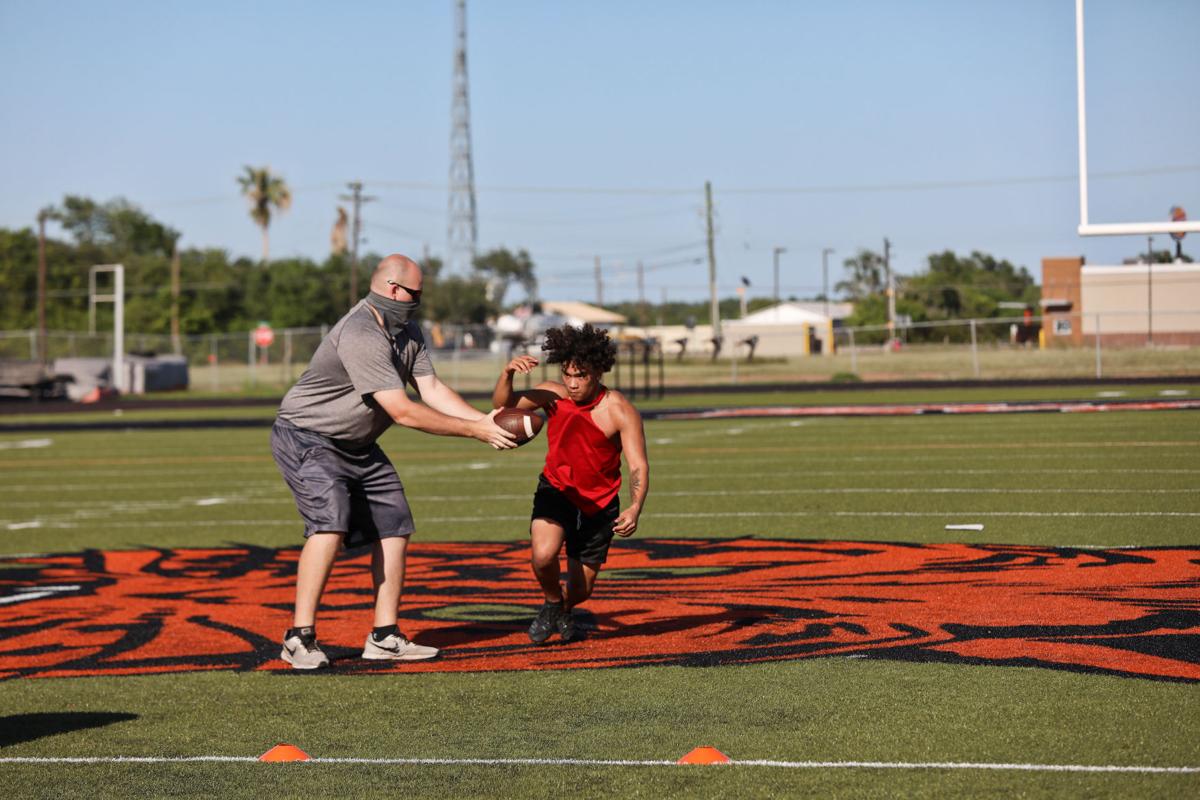 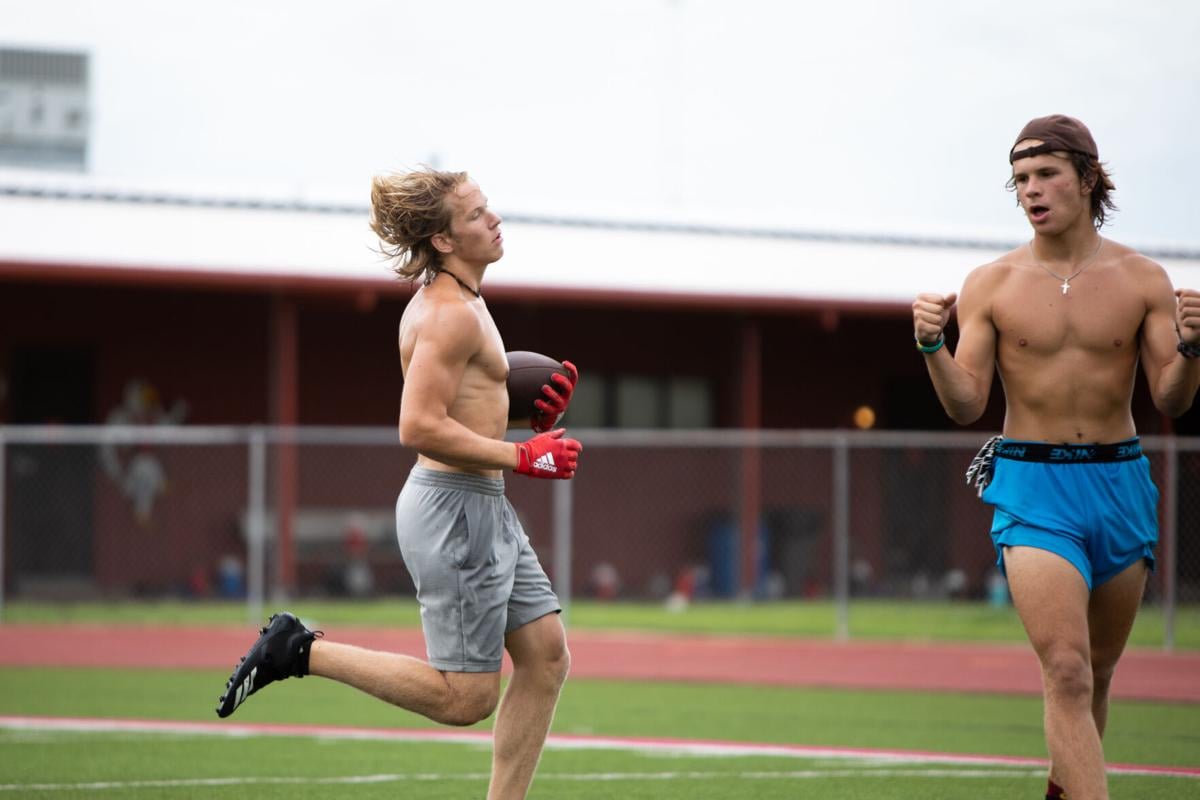 El Campo’s Nathan Willis runs with the ball during a drill for football strength and conditioning workouts at Ricebird Stadium on July 22. 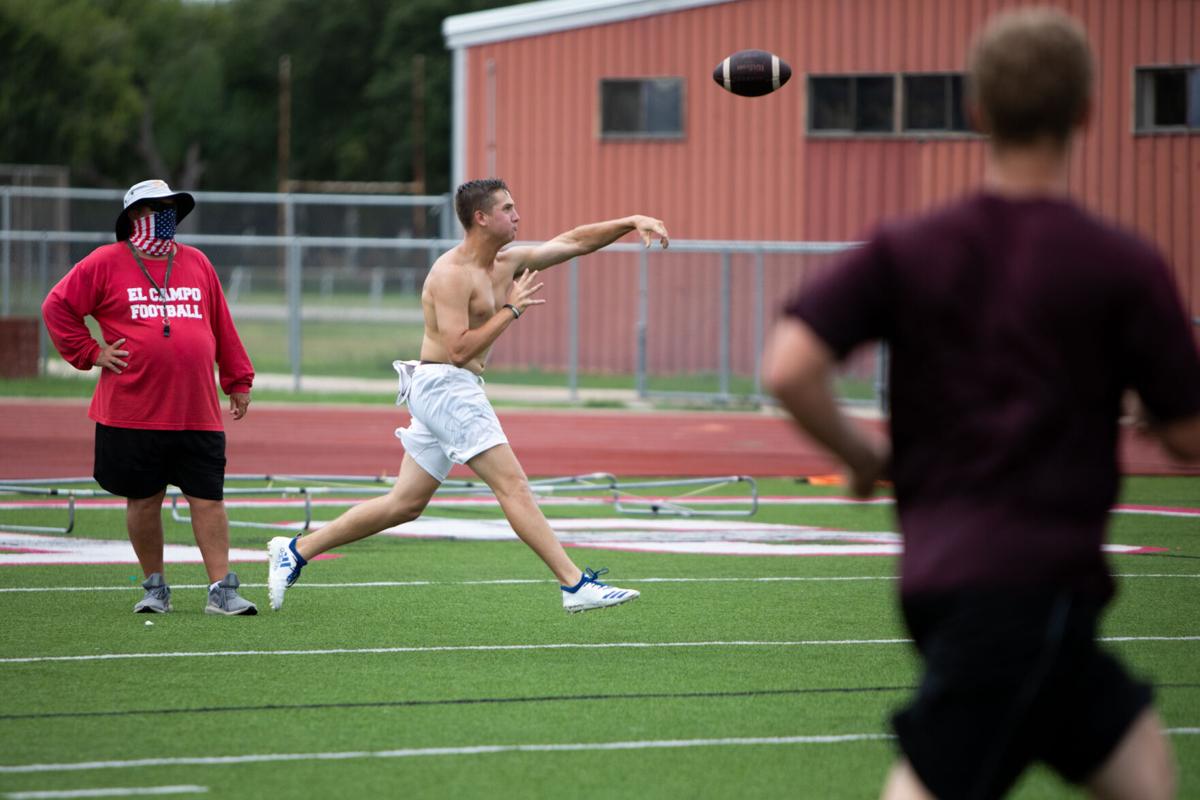 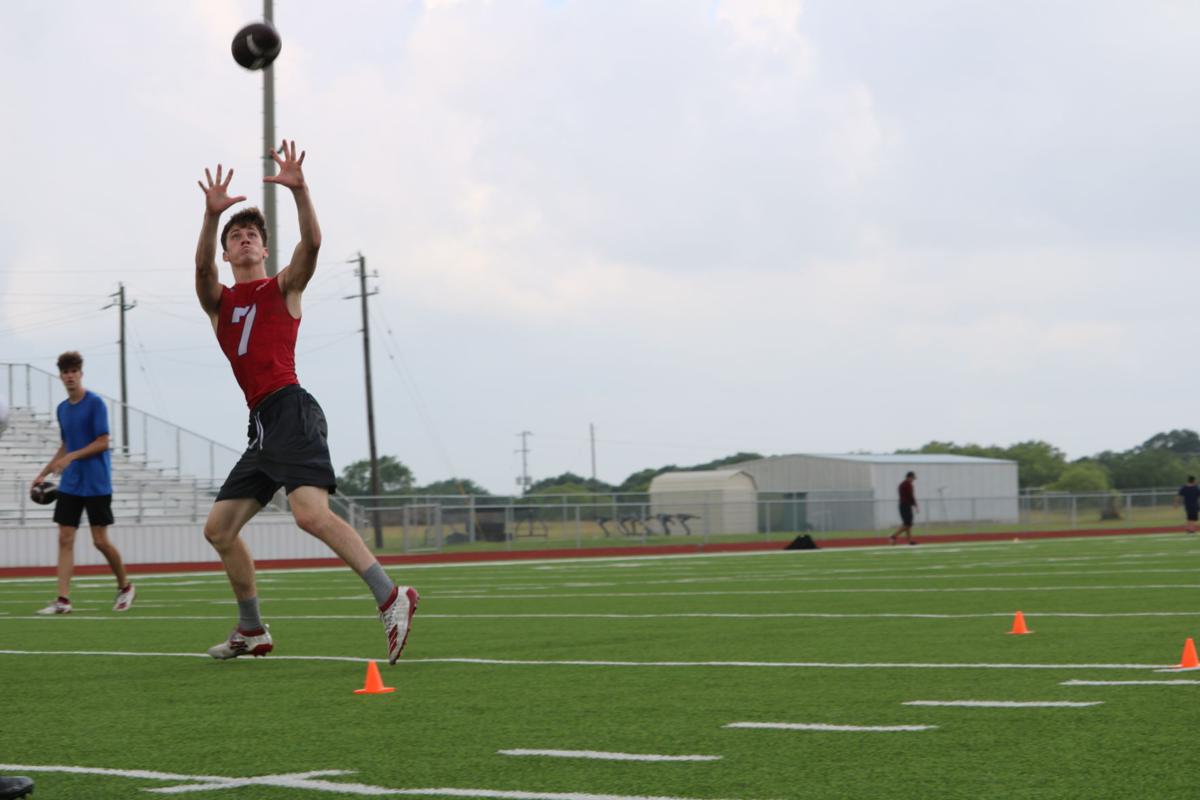 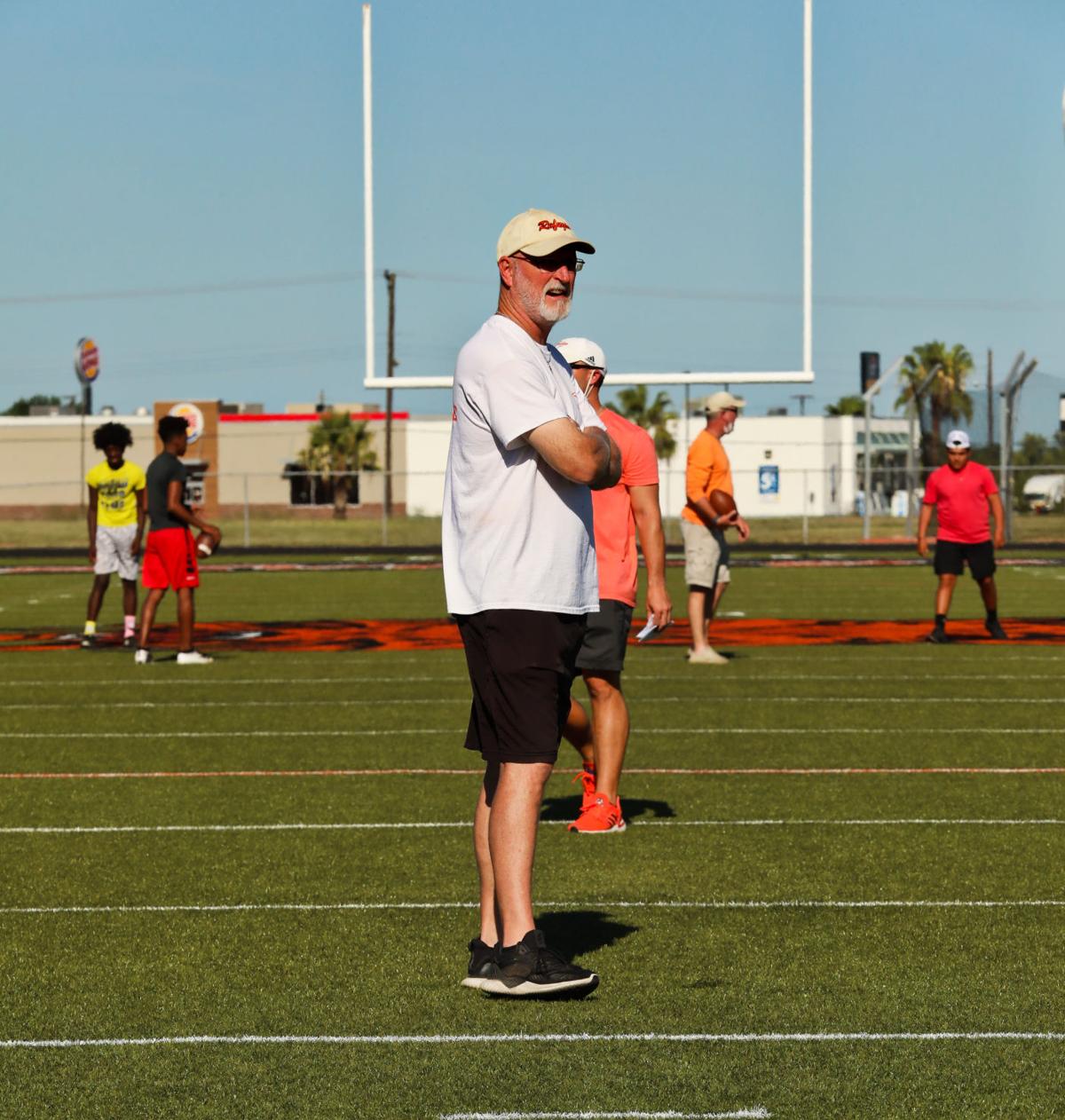 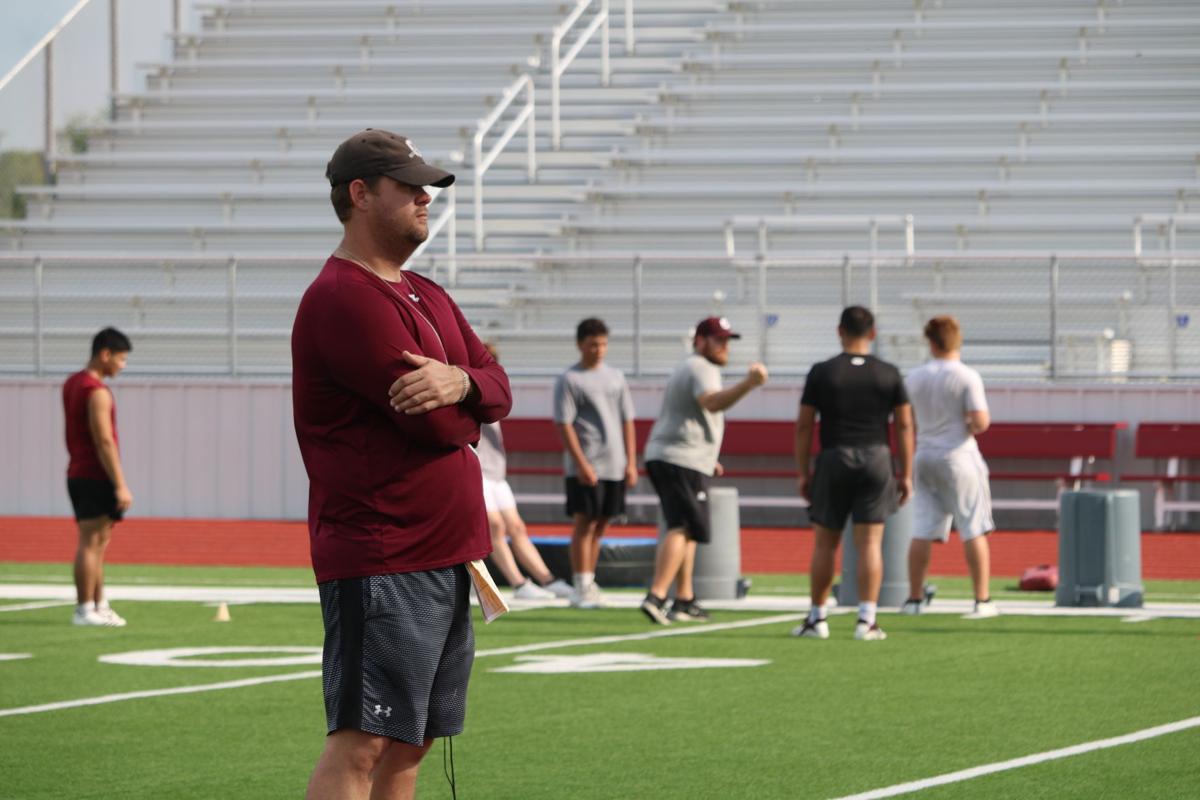 El Campo’s Nathan Willis runs with the ball during a drill for football strength and conditioning workouts at Ricebird Stadium on July 22.

Football coaches almost always include a caveat when assessing their chances for an upcoming season.

After going over their strengths and weaknesses, they’ll almost always add, “We have to stay healthy.”

Key injuries can ruin the hopes of almost any team, and this year you can add the COVID-19 pandemic to the list.

“Always is, bud,” responded Refugio coach Jason Herring when asked about the importance of avoiding injury and sickness, “but this year there is an added dimension.”

The UIL has ruled schools in Class 4A and smaller may begin workouts Monday. Class 5A and 6A schools are allowed to start Sept. 7, the same day TAPPS schools may begin practices.

With the exception of Victoria East, Victoria West, Victoria St. Joseph, Shiner St. Paul, Hallettsville Sacred Heart and Victoria Faith Academy, every school in the area will be able to practice Monday.

Coaches admit the situation remains fluid, and could change in a day.

Following are five things to watch if the season goes forward as planned.

Coaches did their best to keep students safe during summer strength and conditioning drills. Their task becomes even more daunting when practices begin. They will continue many of the same precautions, but social distancing is impossible in football. Players are required to wear masks when they’re not on the field. Some coaches have ordered neck gators for their players, and others are looking into plastic shields for linemen.

COVID-19 shut down athletics, but it did nothing to stop the coaching carousel. Eleven schools in the area went through a coaching change, including Hallettsville Sacred Heart, which has yet to fill its vacancy. The new coaches are Bay City’s Robert Jones and Cuero’s Jack Alvarez in Class 4A; Edna’s Jimmie Mitchell, Goliad’s Kevin Salazar and Karnes City’s Daniel Oleschlegel in Class 3A; Schulenburg’s Walt Brock, Falls City’s Mark Kirchhoff, Woodsboro’s Johnny Lesak and Runge’s Stephen Davis in Class 2A, and St. Joseph’s James Duprie in TAPPS Division IV. Kirchhoff previously coached at Falls City, Salazar and Davis were promoted from positions at their current school, and Jones and Salazar are coaching at their alma mater.

Coaches went through the process of scheduling when the UIL announced its realignment and reclassification in February. Many of those schedules were upended by the COVID-19 pandemic. Some schools are fortunate to be able to play a full schedule, while others may only play seven or eight games. An example is Ganado, which will start the season with five straight games, including its district opener against Weimar on Week 4. The Indians will then play three district games over the next six weeks with open dates for possible illnesses or make-up games.

Watching your favorite team play won’t be a given this season. Most stadiums will be limited to a 50-percent capacity and it remains unclear how schools will deal with social distancing in the stands. The UIL knew attendance would be an issue and for this season lifted its ban on broadcasting Friday night games live. Schools may come up with a way to stream games for fans unable to attend.