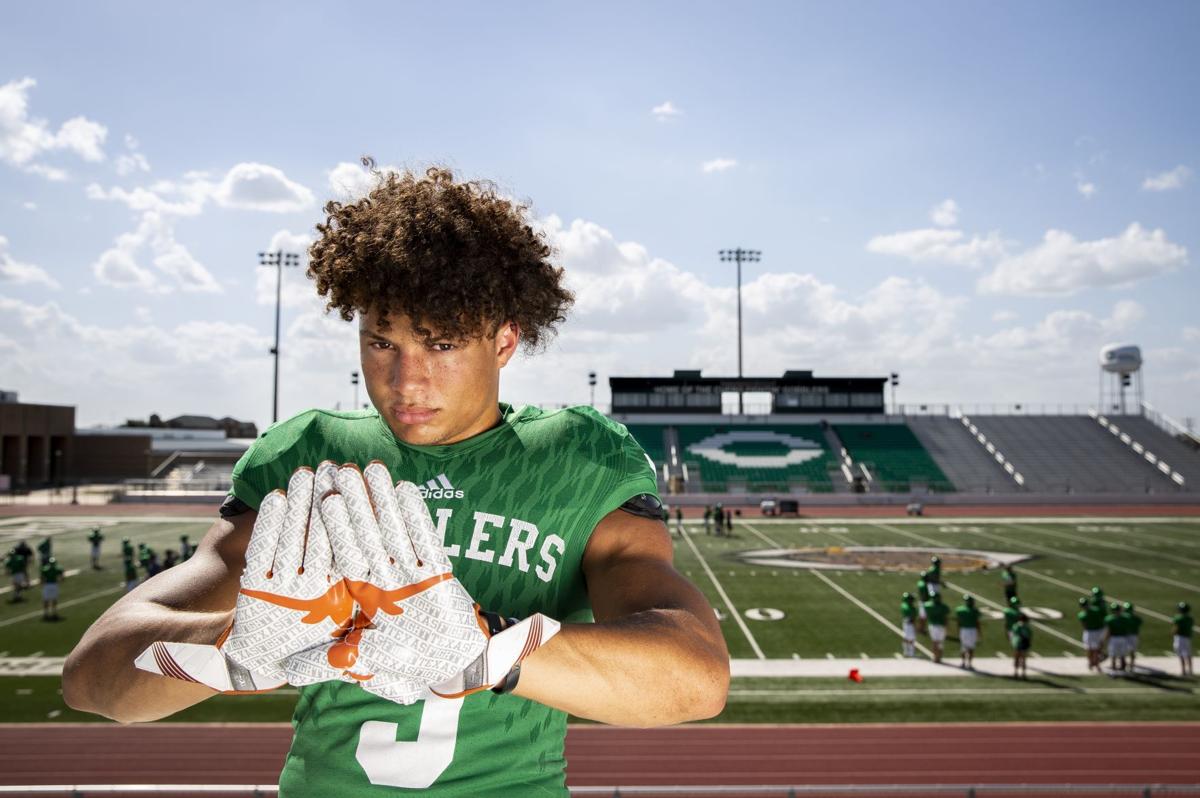 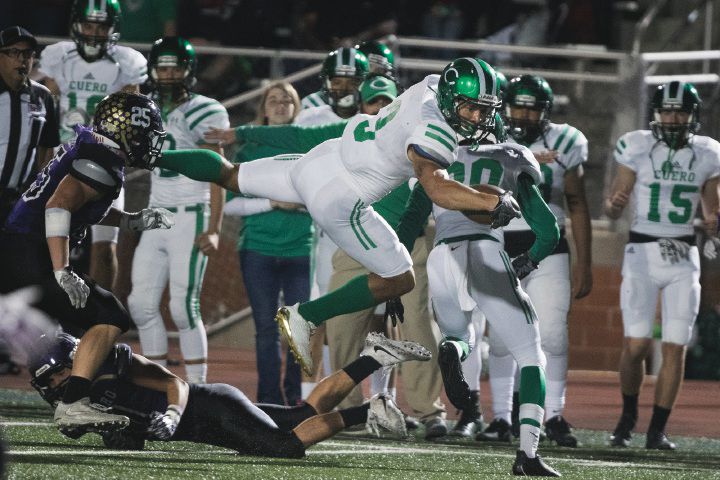 Cuero wide receiver Jordan Whittington leaps over Navarro defenders during the Class 4A, Division II regional playoff at Heroes Stadium in San Antonio on Dec. 1. The Gobblers defeated the Panthers 38-24 to advance to the quarterfinals.

Cuero wide receiver Jordan Whittington leaps over Navarro defenders during the Class 4A, Division II regional playoff at Heroes Stadium in San Antonio on Dec. 1. The Gobblers defeated the Panthers 38-24 to advance to the quarterfinals.

CUERO – Cuero had an additional coach for preseason workouts at Gobbler Stadium.

But the Gobblers would have preferred having another player going through drills.

Jordan Whittington hasn’t practiced because of an injury and is unsure of when he’ll be able to get back on the field.

“I take it day by day,” Whittington said. “At first, it was real depressing because my mind is used to every day getting better physically. Now that’s gone the mental part is what I’m working on; that’s all I can do.”

Whittington injured his groin while running track last season and had surgery for a sports hernia before being cleared to resume activities before the 7on7 state tournament in June.

The pain returned during the tournament and further diagnosis revealed the injury was more extensive than first thought.

“I felt it in 7on7, but I thought it was just sore because I hadn’t done anything for a while,” he said. “They’re really not sure what it is.”

The injury hasn’t kept Whittington from attending practice and offering advice to his teammates.

“I try to help them on the little details,” he said. “Especially on the receiver side and the safeties there are a lot of things you can notice when you’re not on the field and on the sideline. I didn’t see that until now.”

Whittington was rarely on the sideline during his first three seasons at Cuero, becoming an all-state player before committing to play at the University of Texas in March.

“It’s gone by fast,” he said. “I can still remember my first freshman game against Wharton. So yeah, time flies. It’s been a blessing. I still have some things I regret and could have done better. Winning a state championship is really the main goal. Now with our senior class – our eighth-grade team talked about winning state, so this is our senior year and we got us all together, and this is the goal.”

Whittington knows he may have returned too soon from his injury, but has no regrets about joining his teammates at the 7on7 state tournament.

“My team – it’s just the love I have for them,” he said. “Football is just a sport, but if I have one more chance to do something for somebody I’m going to do it.”

Whittington has played receiver and running back, taken snaps in the Wildcat formation on offense, played safety on defense and returned kicks for the Gobblers.

During his career, he has touched the ball 375 times, gained 5,509 yards and scored 59 touchdowns while averaging 14.7-yards per touch and scoring every 6.4 times he touched the ball.

“From the time he was a freshman until now, he’s certainly gotten better every single year athletically, and he’s matured over those four years,” said Cuero coach Travis Reeve. “It’s not common that you have someone like that for four years. He’s very competitive. He wants to be out there all of the time. He doesn’t like not being a part of what’s going on day to day. It says a lot about who he is.”

Whittington’s injury has not altered his plan to graduate at mid-term and enroll at Texas in the spring.

“He’s going to be ready to go,” Reeve said. “I think academically he’s done a great job in the classroom, and physically he’ll be ready to step in this spring and go compete for playing time at Texas.”

Whittington admits the decision to skip the final semester with his classmates was difficult to make.

“I always planned on doing it since I was a sophomore, so when I had the opportunity to do it I just told them to fill in my schedule and let’s get it done,” he said. “I feel like I want to get a head start and I want to play early, as early as I can. I know I’m missing those things. At the same time, that’s not my ultimate goal, is running track.”

The lack of a state title is a sore spot for Whittington, whose father, Quincey, and uncle, Arthur, played on state championship teams at Cuero.

But Arthur Whittington, who went on to play at SMU and won a Super Bowl ring with the Oakland Raiders, is proud of his nephew’s accomplishments.

“He’s got the Whittington in him,” Arthur Whittington said. “He’s a very talented person. I wish I had his size. That’s a big, thick, thick man. He’s quick. He might not be as fast as I used to be, but he can make cuts quicker than I ever made cuts.”

Jordan Whittington is anxious to get back on the field to team up with his brother Devin, also a senior, in what could be the final chapter of his family’s football legacy in Cuero for quite some time.

“Devin and I are pretty much the last,” Jordan Whittington said. “I’m really not sure if there are any more of us. We’re going to do the best we can to keep the legacy going.”