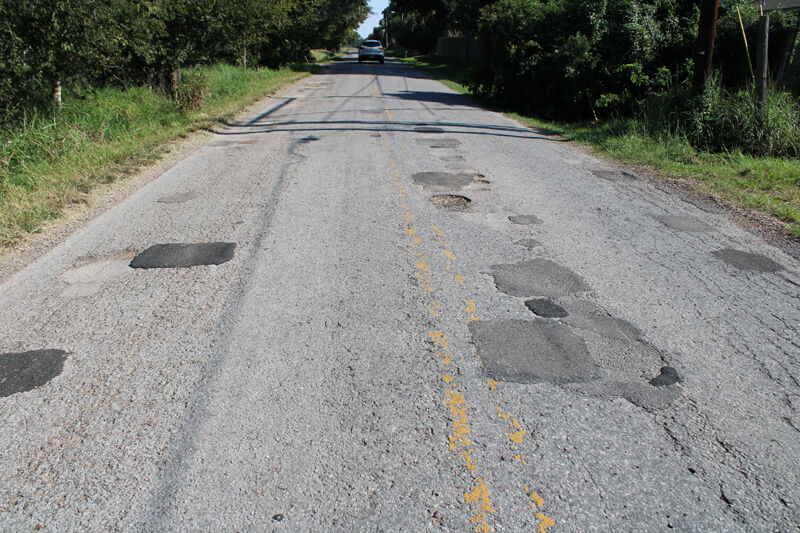 The City of Victoria Public Works in fiscal year 2022 will secure design services for the reconstruction of Dairy Road between Salem Road and Whispering Creek Street. 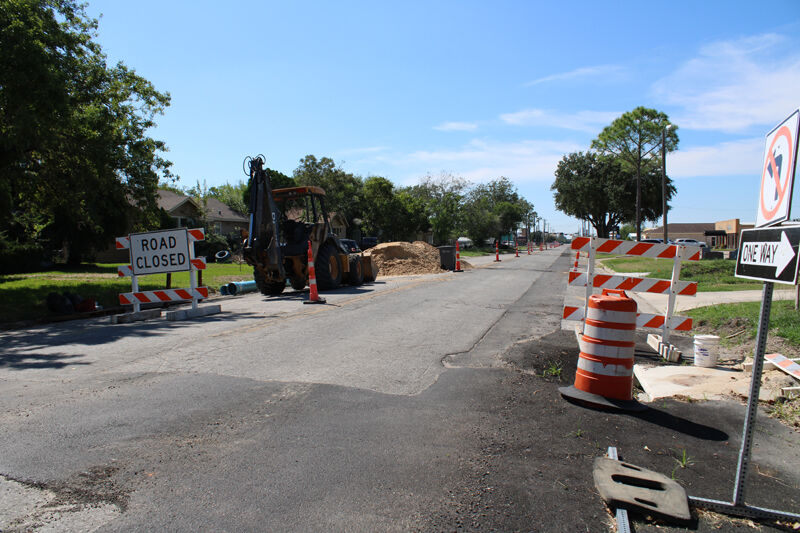 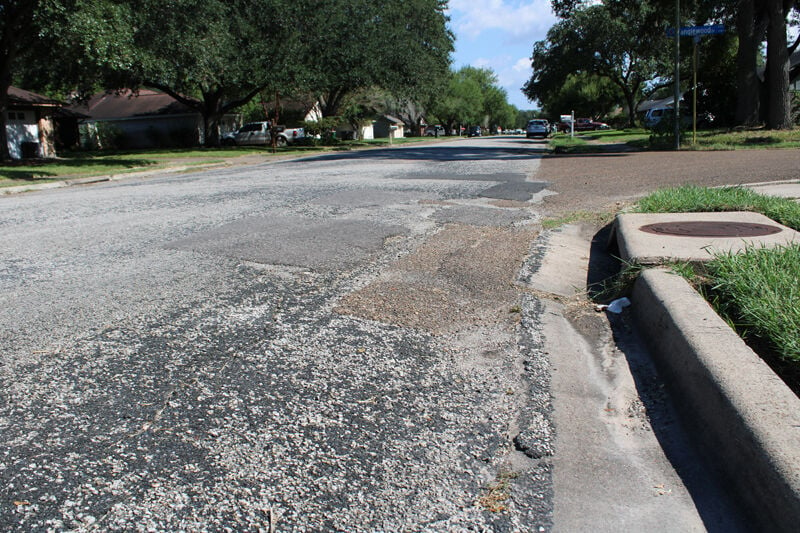 Public Works in fiscal year 2022 will secure design services for reconstruction and utility replacement in the Tanglewood subdivision. 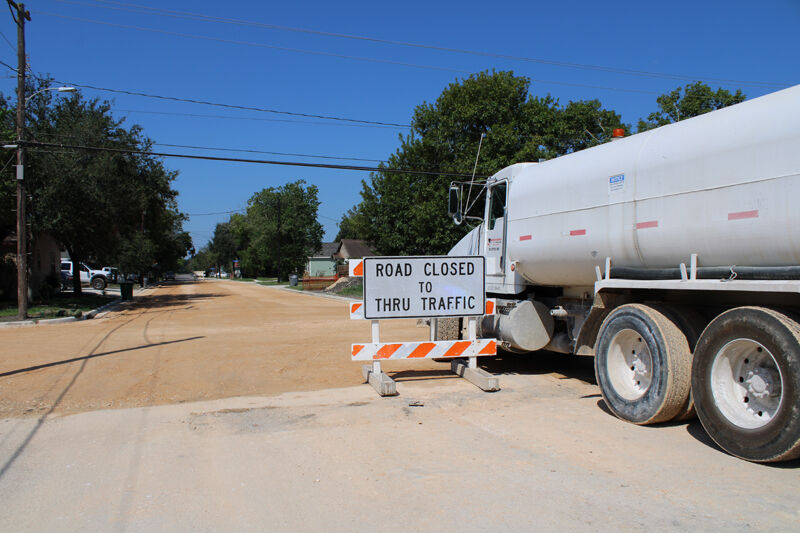 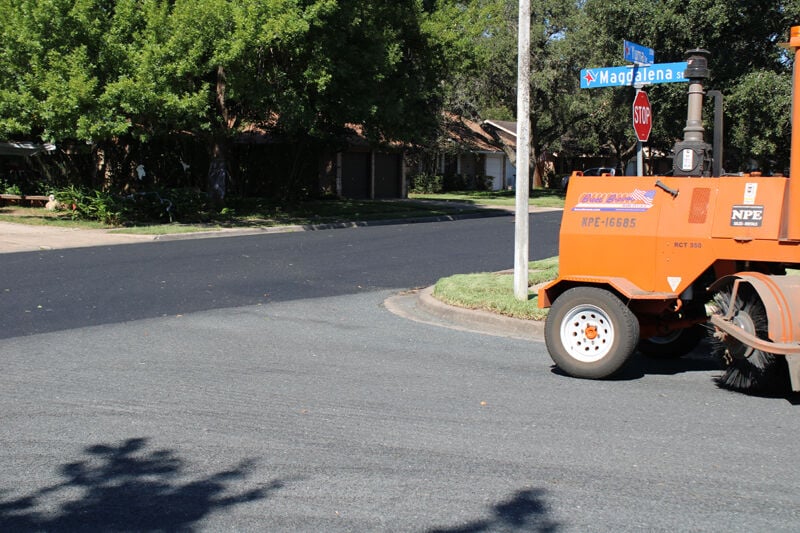 Crews are in the process of applying a black Onyx seal coat in the Cimarron subdivision Oct. 8.

The City of Victoria Public Works in fiscal year 2022 will secure design services for the reconstruction of Dairy Road between Salem Road and Whispering Creek Street.

Public Works in fiscal year 2022 will secure design services for reconstruction and utility replacement in the Tanglewood subdivision.

Crews are in the process of applying a black Onyx seal coat in the Cimarron subdivision Oct. 8.

You’ve probably heard by now that the City is planning to spend a record-breaking $18 million on street projects this fiscal year—but how much is this in terms of streets repaired, and how does the City decide which projects to fund?

The City’s historic investment for fiscal year 2022 translates to 16 miles of roadway. You might think that $18 million sounds like enough to pave every problematic parkway in Victoria, but the truth is that the City has to be choosy about which projects it funds from year to year. The City’s selection method balances data, funding concerns and the goal of helping as many residents as possible. Here are a few of the criteria the City takes into account:

The condition of the streets

If you ask someone “What’s the worst street in Victoria?” their answer will undoubtedly depend on where they live and which streets they notice during their commute. Fortunately, the City has a more scientific way of looking at things: through our Pavement Condition Index.

In 2020, the City of Victoria completed its first-ever comprehensive Street Assessment Study, which assessed every locally managed street in Victoria. Unlike previous street inventories that relied on visual assessments, this new study used laser road surface testing to analyze the pavement of each street and assign Pavement Condition Index scores.

The condition of utilities

When timing street repairs, what’s under the street can be just as important as what’s on the surface.

In addition to pavement conditions, the City keeps track of the condition of below-ground pipes to determine when they’re ready to be replaced. If the pipes below a problem street are due to be replaced soon, the City may need to wait to repair the street until the utilities can be replaced. Otherwise, the City would have to dig up a brand-new street to get to the utilities. (Imagine having to fix the pipes in your walls right after applying a new coat of paint!)

The Tanglewood subdivision is one example of a neighborhood whose problems extend below the surface. Because the utilities are past their life expectancy, the City will need to replace them before the streets can be repaired. This process will begin this fiscal year, when the City hires design services for utility replacement and street reconstruction in the neighborhood.

The worse shape a street is in, the more expensive it will be to fix—and funding just a few of these expensive projects would eat up the capital improvement plan budget and leave nothing for the rest of the city.

Take, for example, the soon-to-be-completed North Heights reconstruction. When the City finishes the final phase of the project this fiscal year, we’ll have spent more than $16 million over the course of seven years reconstructing this subdivision. If the City were to spend the whole year’s budget on similarly priced reconstruction projects, we would only be able to impact a small number of residents. That’s why expensive projects like the North Heights reconstruction need to be tackled slowly, one street at a time—or postponed until more funding is available.

We should fix the bad streets first and leave the others for later, right? Well, not exactly.

Most streets require some form of preventative maintenance every 7-10 years. When you drive through a neighborhood like the Greenbriar subdivision, you might see decent roads that don’t need much attention, but an engineer sees a window of opportunity that must be seized promptly.

Part of each year’s capital improvement plan funding goes toward sealing streets that are in the 7- to 10-year window. This is accomplished by applying a protective overcoat.

All part of the plan

The City’s comprehensive decision-making process is reflected in our five-year capital improvement plan. Here you’ll find a list of all the streets the City plans to repair as of fiscal year 2022 (the document is updated on an ongoing basis).

To learn more about projects the City is funding this fiscal year (street-related and otherwise), check out our budget page.

Sam Hankins is the communications specialist for the City of Victoria.

"Otherwise, the City would have to dig up a brand-new street to get to the utilities", which it cleverly did on a section of Airline several years ago, not just once, but twice, paving the street 3 times. Apparently the street and utilities departments are going to coordinate their respective missions this time and spend the money just once per project.